Geoparks are extensions of land with a series of geological characteristics that are unique in the world. These geological parks are protected as World Heritage Sites by UNESCO because of their great value in understanding the dynamics of the earth. Behind the geoparks, there is a clear functional intention to study the planet and its future. The intention is also to promote the sustainability of the land through dissemination and activities that boost the local economy. 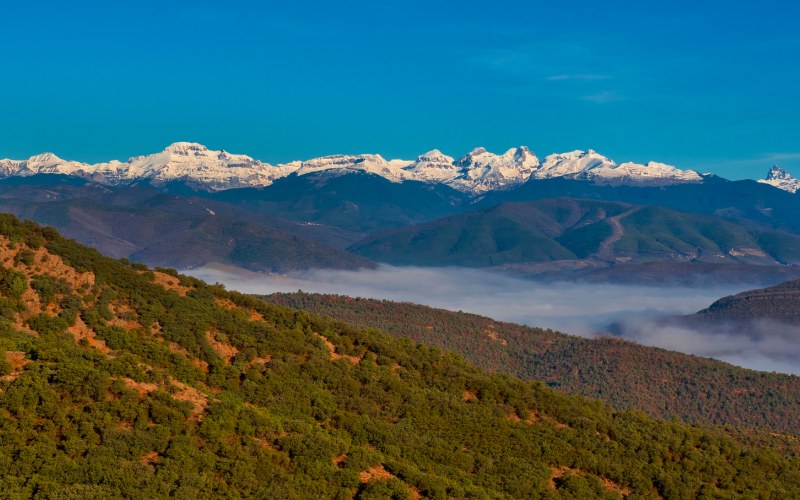 Spain is the second country in the world with more recognised geoparks after China, with a total of 15 between the peninsula and its islands. It covers a great diversity of geological sites perfect for ecotourism. An opportunity for sustainable tourism and to get to know a little more of Spain’s geological and cultural wealth. 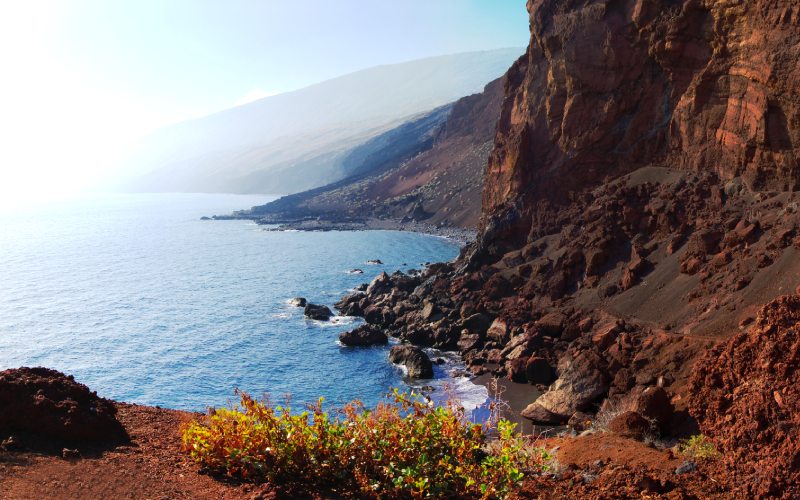 The southernmost and smallest island of the Canaries is home to corners full of geological history. The exceptional volcanic land of El Hierro offers a spectacle of images in and out of the sea due to its environmental diversity. This island’s geopark is home to several visitors’ centres and was declared a Biosphere Reserve by UNESCO in 2000. A symbol of the ancient aborigines of the area that has become the island’s history is the Garoé tree; which collected water in its branches to supply the then scarce population. There is an interesting educational centre on this story and its symbolism; which also studies the meteorological phenomenon of horizontal rain. 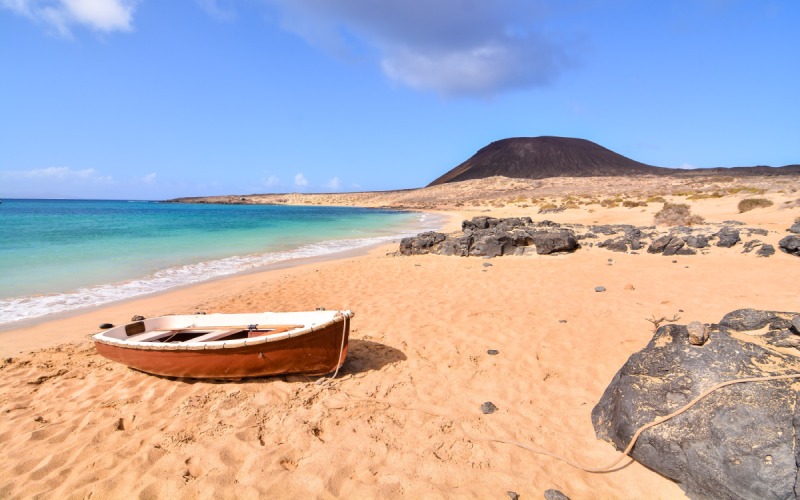 Lanzarote is known as the island of volcanoes, a geological landscape that extends to the small islands in the Chinijo archipelago, such as La Graciosa. The town hall records list up to 70 points of geological interest in this geopark alone; giving the area that characteristic lunar landscape look. The beaches, the different islets and the calderas have formed a unique landscape. Coloured sediments that will delight the best amateur photographers and make it one of the most interesting geoparks. 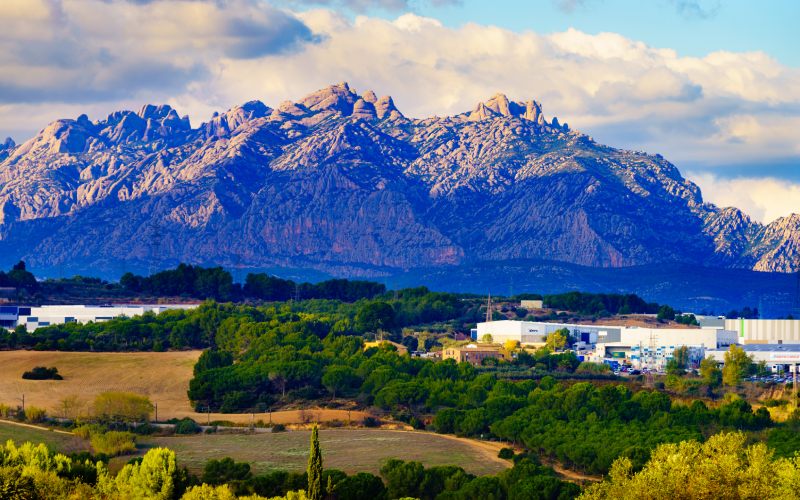 The geological interest of this wide area located in the central part of Catalonia lies in the formation of the Pyrenees. Starting from Manresa as a reference, the geopark has unmissable areas in its vicinity, such as the Montserrat Massif, the Toll caves, the Sant Llorenç del Munt i l’Obac Natural Park and the Salt Mountain Cultural Park in Cardona. These are remains that date back more than 35 million years. It is possible to contemplate them thanks to excellent hiking routes, treading on land that once occupied a vast sea. 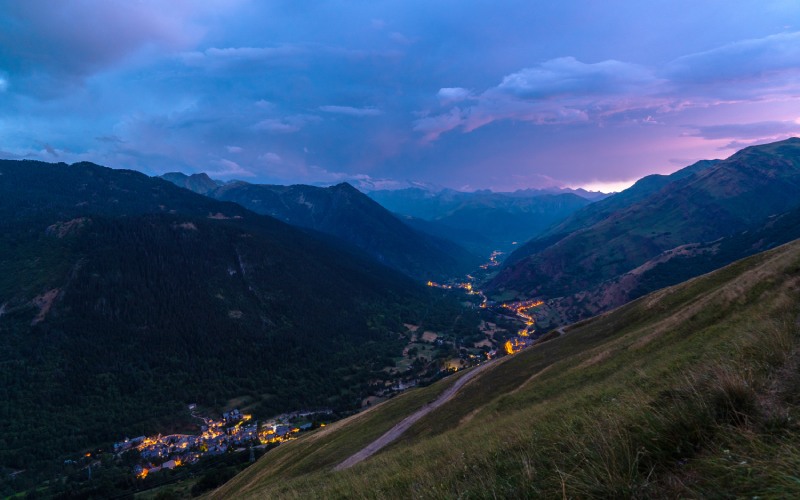 Valley in the Pyrenean area of Lleida. | Shutterstock

Moving towards the interior of Catalonia and again towards the Pyrenees, the Orígens de Lleida geopark offers a wide range of outdoor activities. These allow visitors to get to know everything from the most remote gorge to the remains of the dinosaurs that inhabited the area. With its starting point in Tremp, the park has an impressive geological and mining heritage enriched by the towns of the area, with important medieval remains. One of the geoparks with the best views. 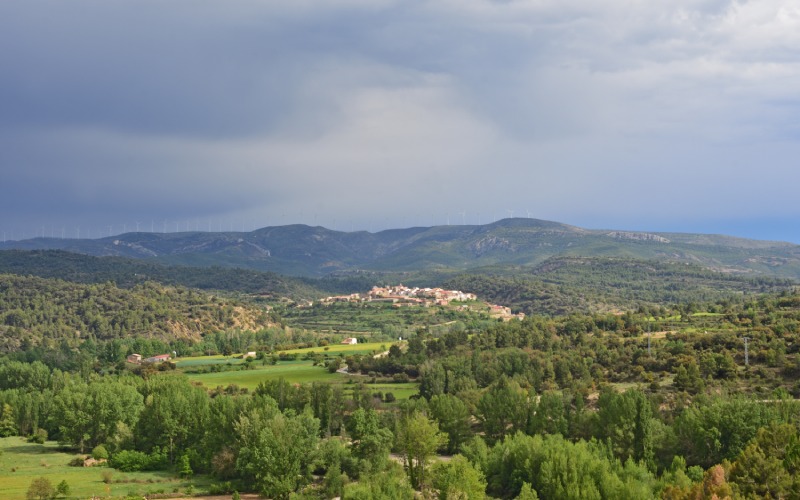 Aragón has two important geoparks. The first one, the territory of the Maestrazgo, has been raised as one of the centres of the sustainable tourism in the peninsula, between the mountain ranges that surround it. It has more than 600 archaeological sites, including rock art, as well as numerous ecotourism areas with natural monuments. The karstic complexes, such as those of the Grutas de Cristal de Molinos, are of breathtaking beauty. There is also one of the places of reference for families and dinosaur enthusiasts, Dinópolis, in Teruel, as the area has more than 70 palaeontological sites. 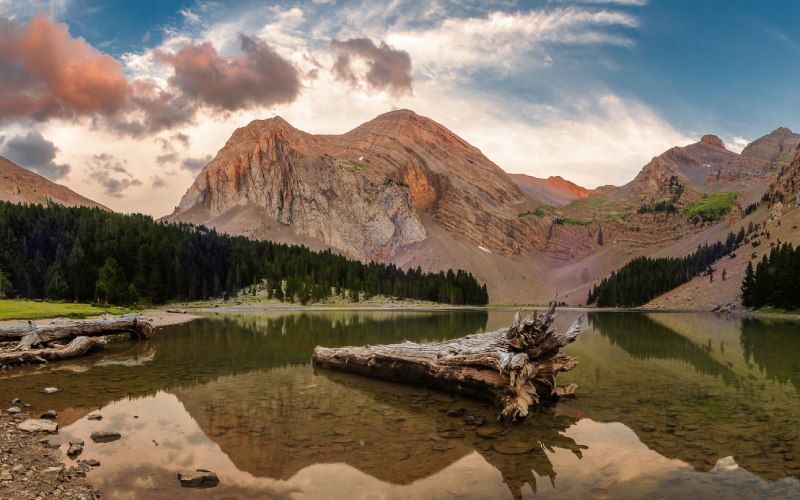 Lake in the Sobrarbe Pyrenees. | Shutterstock

Close to the Pyrenees, with such outstanding towns as Aínsa or Jaca close by, we find the Sobrarbe Geopark. With its epicentre in Boltaña, the county extends along high mountains and mountain ranges. An area sown with water that has managed to develop its sustainable activity around the multitude of geological resources. It also has important remains of reefs, glaciers and fossil remains. The geopark has a wide range of tourist possibilities including hiking routes and nature reserves such as Ordesa-Viñamala, one of the most beautiful geoparks (and even places) in the whole peninsula.

The richness of the Basque Country‘s landscape is overwhelming, both in terms of its forests and beaches and meadows of saturated and intense green. The Cantabrian Sea and the peculiar geology of the area have been shaping the Flysch formations over the years, a fundamental route within the geopark. This type of rocky formations remind us of the pages of a book, with defined folds. An image created thanks to the conjunction of sediments of soft origin with harder materials, eroded over time. Between Zumaia and Deba, you can enjoy the unusual shaped cliffs, with routes prepared on foot and even by boat, as well as being able to visit fishing villages such as Mutriku or the Ruta de los Miradores (Route of the Viewpoints).

The interior also hides valleys yet to be explored and karstic areas of great geological interest. There is also an excellent collection of cave paintings in Cave of Altxerri in Aia; or in the Cave of Ekain in Deba. 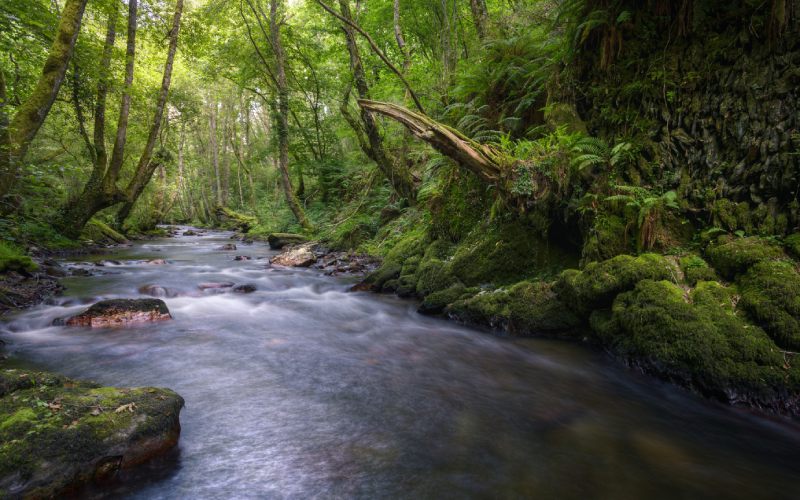 Vegetation of the Courel Geopark. | Shutterstock

The contrast between the strong Atlantic influence and the Mediterranean climate has carved out the Montes de Courel, Lugo, another of Spain’s outstanding geoparks. This area runs from the Valley of the river Sil, essential for pilgrims on the Way to Santiago in winter, to the north in the lands of Folgoso de Courel. The extensive flora of the park turns every season into a new opportunity to discover the area with its exuberant vegetation and colours.

There are a total of 18 viewpoints distributed throughout the park; in addition to the so-called Aldeas Paleozóicas (Paleozoic Villages), each built with rocks typical of the area. On the paths you can see the remains of the glacial cirques and the important gold mines exploited by the Romans. As with its other geo-siblings, gastronomic tourism is another reasonable reason to plan a getaway to this land. 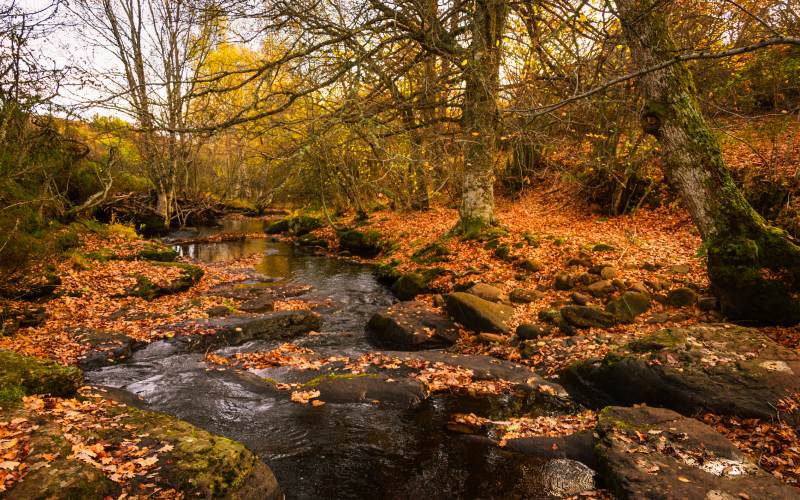 The Castilian plain also has many secrets among its rocks. The limestone, with the help of the water and the meteorology of this region, has carved between Burgos and Palencia, caves and moors but also valleys with waterfalls and great vegetation. About 16 towns are located within the limits of Las Loras; preserving its charm and a way of life integrated with the relief and conservation of the area. From Aguilar de Campoo to the Sédano Valley, with its canyons and vegetation, you can find routes for the whole family and important points of geological interest, as well as many options for active tourism. 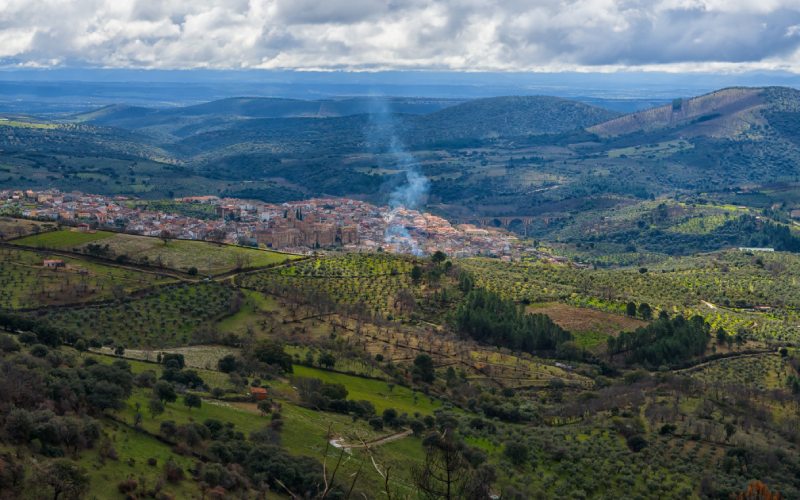 The heart of Cáceres, near Guadalupe, is another place with such a unique and geologically rich orography that it has earned its place among the geoparks. The numerous visitor centres that run along its borders have gorges and narrow passages. But also close to Monfragüe.

The park has places as impressive as the Cave of Castañar de Ibor. It is a spectacular formation where the rocks have adopted sculptural forms of great beauty. At the same time they are very fragile, so visits are upon request. Also not to be missed are visits to its many mines, including the Mina del Filón de Costanaza, which became the largest mine in Europe at the beginning of the last century. 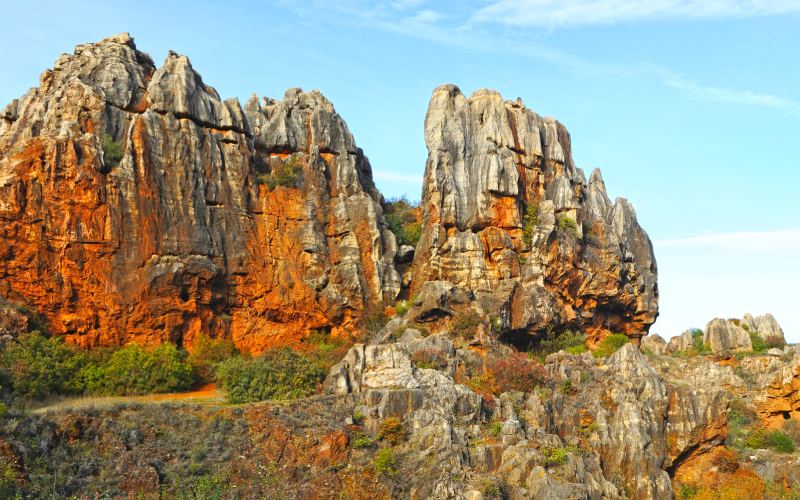 Located in the central part of Sierra Morena, it is possible to find traces of between 500 and 1000 million years; the Proterozoic. Its remains are very varied by geological age and by its changing landscapes; from valleys and straits to the steep cliffs of the mountain range. There are numerous recreational areas prepared for visitors to its 39 geosites. One example is the Cerro del Hierro; a paleokarst or terrain where young rocks have been raised on top of other very old limestone. The geological formations are impressive, in an area where the Romans exploited the rich iron deposits. 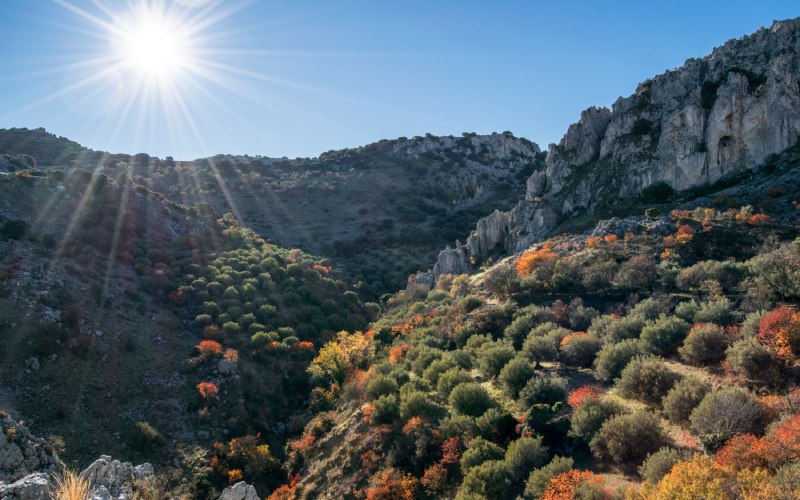 The centre of Andalusia has one of the best areas to enjoy tourism, with options that include important sites such as white villages, the largest reservoir in Andalusia or one of the longest sections of the Vías Verdes. But also a geological life where remains as impressive as those of the ancient Tethys Sea; which occupied the area before the formation of the continent, come to light.

This has brought with it another of the region’s peculiarities: being known as the land of the ammonites. These spiral-shaped cephalopods from the Cretaceous period inhabited the area more than 60 million years ago. Fossil remains abound, as do rocky corners for climbing lovers and interesting cultural examples such as those of the Baroque period in Priego de Córdoba. For mushroom lovers, the first mycological garden in Europe was opened here. 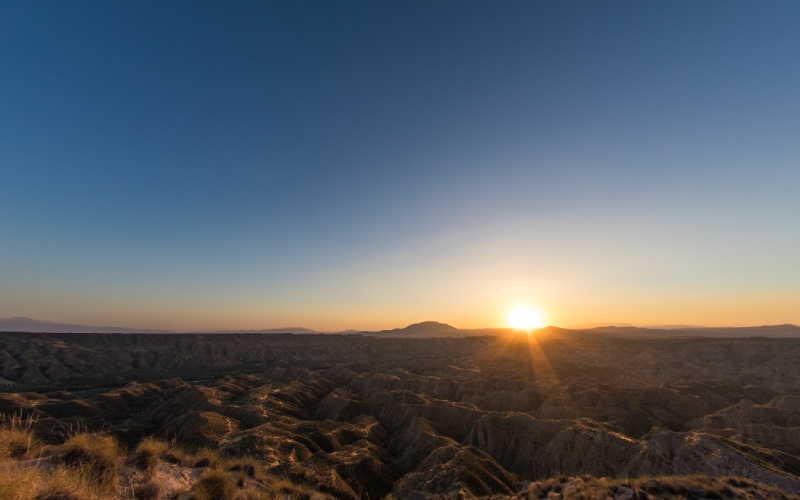 The Granada Geopark is a fundamental nucleus at a continental level for understanding the history of the planet. It has a remarkable number of fossil remains of the great mammals of the Quaternary that are internationally recognized. The rivers and streams have shaped a relief of valleys and pits, but also of steep cliffs. Lacking an outlet to the sea, the accumulation of sediments led to the creation of gully landscapes; such as drawings carved into the rocks.

Rough and wildly beautiful lands with clay colours and impressive viewpoints like the one at the Spanish End of the World. The park also invites you to learn a little more about the history of the first settlers of the peninsula; since there are many remains from the Bronze Age. Among other curiosities are the Guadix caves, a perfect example of bioclimatization. One of the geoparks you have to visit if you are in Granada! 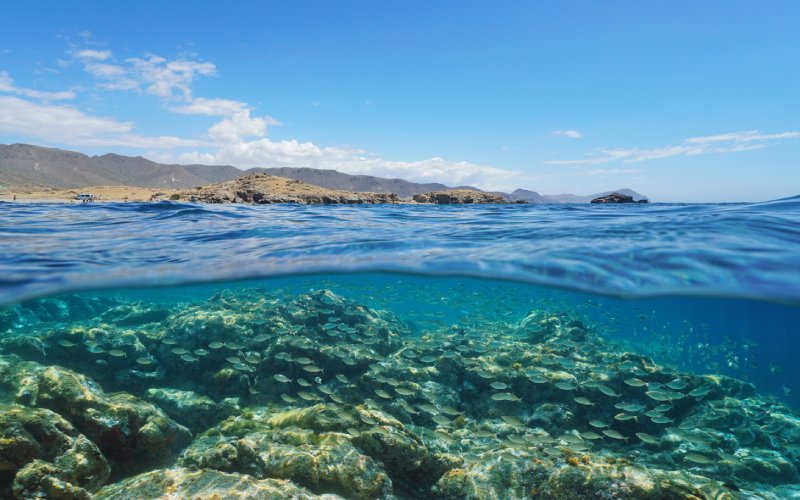 It is difficult to describe the beauty of this part of the Mediterranean, sculpted by volcanoes. The colours of the rocks range from the reddish Rodalquilar mines to the golden beaches and the turquoise contrasts of the water in each of the coves in its relief. The collision of the African and Eurasian tectonic plates caused magma to rise to the surface; shaping the landscapes we know today. This area is also crossed by the Carboneras fault, which added more activity and displacement of the land. The network of hiking routes to discover the dunes, the desert and the beaches where Indiana Jones himself walked in The Last Crusade is wide and full of welcoming corners in its small towns. 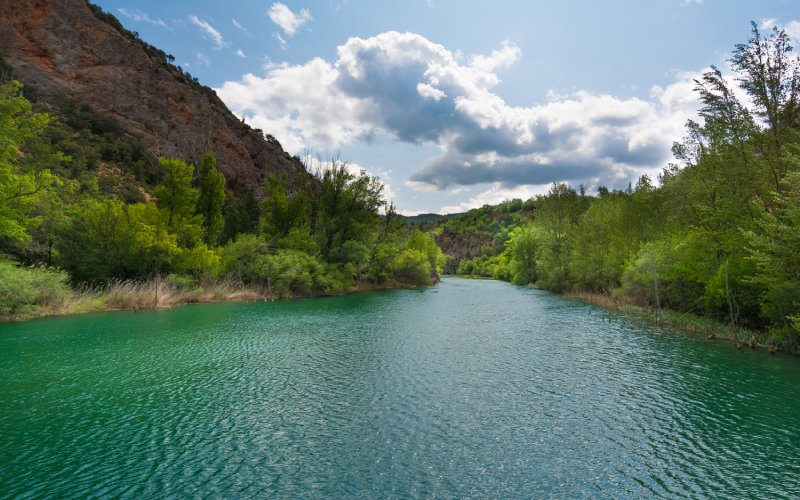 In the centre of the peninsula, Guadalajara, is this enormous geopark which has a great diversity of monuments, and not only natural ones. The terrain includes moors, forests, castles and history, from Molina de Aragón to Sesma del Campo and the duchy of Medinaceli. The source of the River Tagus runs through its paths and other river paths, such as the Caldereros mountain range or visually impressive places such as the Virgen de la Hoz ravine, as well as civil works that have accompanied the region since Roman times.