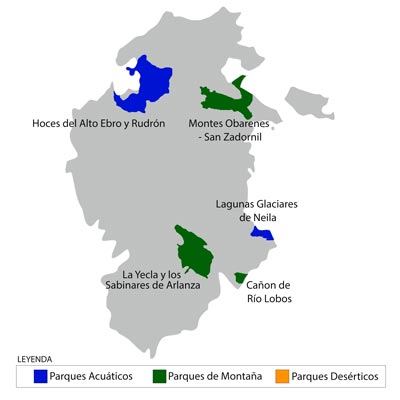 Lying in the northwest of the province of Burgos, the Natural Park of Alto Ebro and Rudrón gorges has 45.767 hectares of protected area since it was declared as Natural Park by the Spanish government in 2008.

Through the riverbeds of the rivers Rudrón and Ebro, the park is formed by a characteristic succession of deep canyons and narrow gorges caused by the effect of water and winter over this limestone during the last centuries.

Around the canyons, that in certain sections are even 200 metres height, extend wide moors that sometimes led to impressive viewpoints towards the landscape of the park.

Within the borders of the protected areas, there are several elements of natural interest such as the waterfall of Fuente de Orbaneja, the karastic spring of Pozo Azul in Covanera or the Cueva del Moro. In this latter, the Rudrón river resurfaces after having sunk underground in a previous section of its course.

There are a wide range of vegetation in the area. Elements from the mediterranean and atlantic climate are mixed with those of the north of Spain such as the holm oak, the beech tree, the gall oak, the willow and the black poplar.

The huge rocky places of its cliffs are a perfect ecosystem to many cliff-nesting birds such as the imperial eagle, the Bonelli’s eagle, the griffon vulture, the eagle owl and the peregrine falcon.

Furthermore, in the mountain areas of northern Spain are mammals such as the roe deer, the badger, the Pyrenean desman and the otter. The quantity of amphibians and reptiles that populate the Alto Ebro and Rudrón gorges is also remarkable.

The major attraction for hikers and cyclists is a signposted route through the Ebro gorge. Along the Rudrón river you can cover the plots of its upper reaches or visiting its several attractions such as the Pozo Azul, the Mirador de Moradillo del Castillo or the emergence of its riverbed.

The road N-623 covers the Natural Park of the Alto Ebro gorges from north to south, crossing several municipalities such as Valdelateja or Covanera and leaving behind some secondary branches that go into other points of interest. The protected area is also bordered by roads N-232 to the north and N-627 to the south.

Once there, you may also consider visiting the beautiful nearby towns of Medina de Pomar, Frías and Briviescas.

Some recommendations on where to eat and where to sleep around