Lugo cannot be conceived without its wall, the most complete and best preserved example of Roman fortified architecture in all of Western Europe. Built more than 17 centuries ago; it is the only one of the three continents through which the Roman Empire spread that maintains its circuit intact. For this reason it was declared a World Heritage Site in 2000 and has been twinned with the Great Wall of China since 2007. 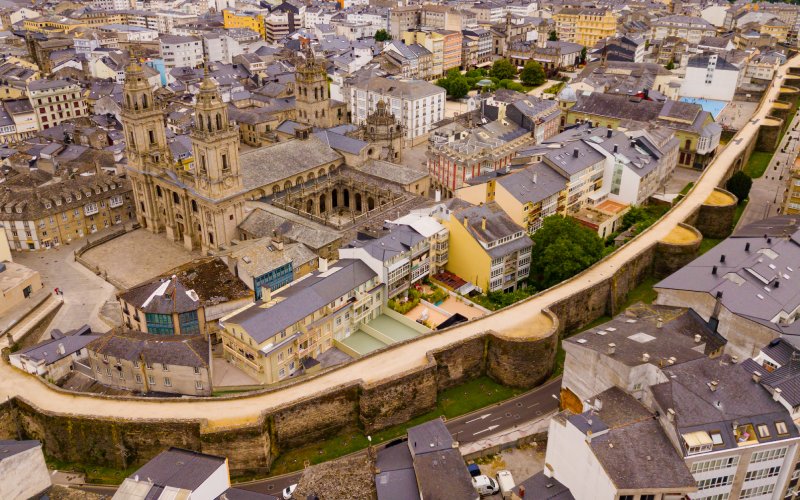 The old Lucus Augusti and the current Lugo separated by the wall. | Shutterstock

The Roman wall is the maximum representative emblem of the city of Lugo and the memory of its glorious Roman past. Its excellent state of conservation allows it to be comfortably walked along its 2,226-metre route. Although nowadays its social function has replaced the original defensive one, the wall still plays an essential role in this Galician city, turning it into an inseparable reality of the daily life of all the inhabitants of Lugo. This rich cultural and historical heritage that it holds inside its fortification is more than enough reason to get to know this beautiful city of Spanish and Roman essence.

The site of the Wall of Lugo dates back to Roman Hispania; when more than two thousand years ago it was called Lucus Augusti. Although it was founded long before the wall was built, around 12 BC, under the legacy of Paulo Favio Máximo; in the name of the Roman Emperor Octavian Augustus, to whom the city owes its name. The importance of these lands lay above all in their gold mines; which became an inexhaustible source for the maintenance of the Roman Empire’s finances. 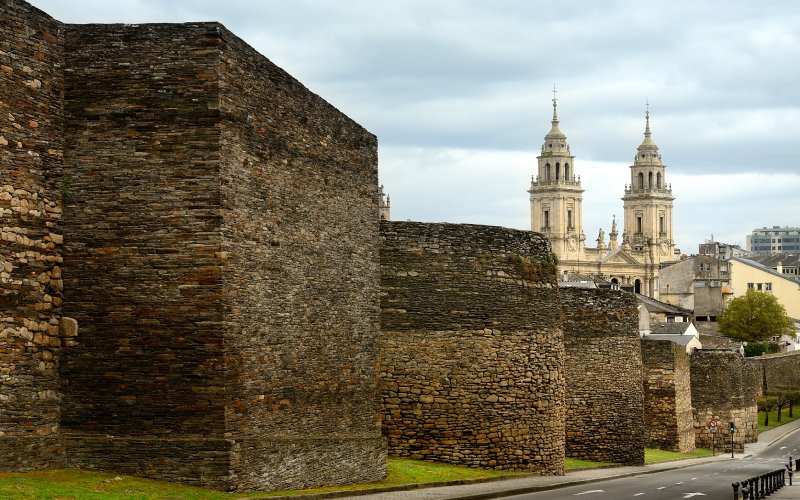 The solid structure of the wall keeps it standing 17 centuries later. | Shutterstock

It was in the 2nd century AD that the Romans decided to build a great wall to protect Lucus Augusti from the growing barbaric threat. These were critical times not only from a military point of view but also politically; as the instability of the Roman Empire was already a reality.

Built with millions of slate and granite stones; the Roman wall of Lugo is more than two kilometres long and ten metres high. It is a fortification that has lasted over time thanks to its solid structure; which reaches between four and seven meters wide in some of its points. Along its route, 85 towers were built, of which 71 are still standing today; proving that this Roman wall is impassable. 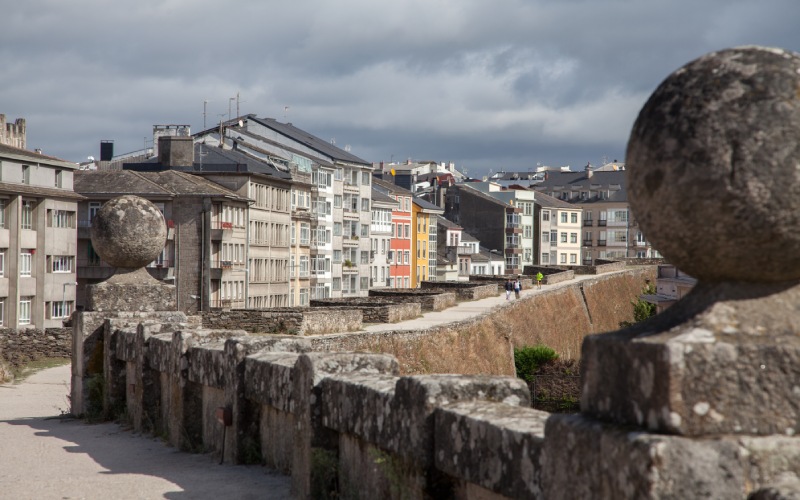 The wall was built at that time as a separation and defence of the city; but over time it became an integrating element between the ancient Lucus Augusti and the later Lugo that has developed around it. The layout of the defensive construction remains a mystery to this day; as it is not known why the Romans left important residential areas outside the wall while they protected other uninhabited areas.

In any case, its reinforced stone skeleton has allowed the citizens of Lugo and their visitors to walk along the adarve that connects the wide walls and to continue enjoying this powerful Roman work 17 centuries later. From the top of its towers, the best postcard pictures of the city are taken.

In addition to its defensive function; the wall also served to delimit the charter and with it the taxes of the city. It is here that the fortified gates at the entrance to the Lucus Augusti take on special importance; from which the gate tax was collected and the control of all those who entered and left the enclosure was carried out.

There are ten gates that today give way to the interior of the historical Lugo; which are also conserved in very good condition. Five of them correspond to the main routes of the urban layout; built in Roman times (the Puerta Miñá, the one of Santiago, the Porta Nova, the Falsa and the one of San Pedro). The other five were built in the 19th century to meet the needs of the city’s expansion (Puerta del Obispo Aguirre, Puerta del Campo Castelo, Puerta de la Estación, Puerta de San Fernando and Puerta del Obispo Odario). Each of these ten openings is distinguished by its own artistic and historical characteristics. 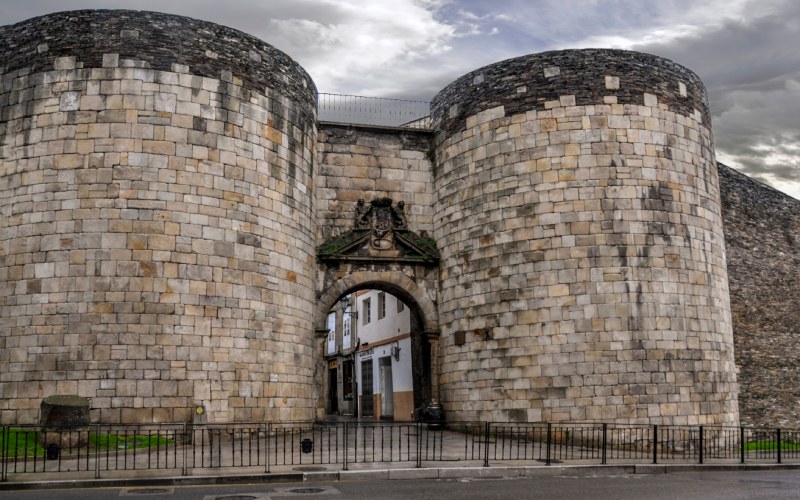 Of all the Roman constructions, the Puerta Miñá is the one that receives the most attention; as it is the best preserved of all, with hardly any modifications. It is popularly known as Puerta del Carmen as it is located in front of the chapel with this name. The entrance is formed by a semicircular arch and barrel vault; as well as being protected by two solid granite towers. Nowadays, pilgrims on their way to Santiago de Compostela follow the part of the 19th century Roman road of Antoninio’s Itinerary, which leaves the city through this gate. From here it went towards the bridge of Roman origin over the Miño River and connected the main capitals of the northwest of the peninsula: Asturica Augusta (Astorga), Lucus Augusti (Lugo) and Bracara Augusta (Braga). Hence the original name of the gate.

As for the more modern entrances, we can distinguish the Puerta de San Fernando, whose opening was in 1854. It is located in the same place where the old Roman aqueduct of Lugo entered. It was when Queen Isabella II and her children visited the city of Lugo that the entrance was named Puerta del Príncipe Alfonso; in honour of the future Alfonso XII. Today, a monolith of the Emeritus Monarchs Juan Carlos I and Sofia stands next to it; to commemorate the royal visit to the city in 1976.

A journey through Lucus Augusti 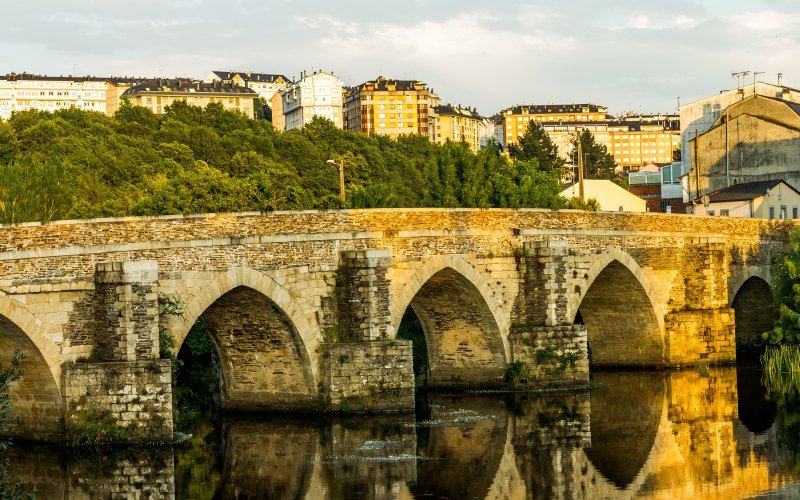 The area within the walls houses the old town centre of the ancient Lucus Augusti; where there are other examples of the Roman foundation period that can also be visited. First of all, the incredible Roman Bridge built to cross the Miño river in the XIX Roman Way that communicated Lugo with Braga. Despite the various modifications suffered since the late Middle Ages, the current bridge still retains much of the original foundations. This Roman road has been and still is part of the Primitive Pilgrimage Way to Santiago.

One hundred metres from the bridge and on the left bank of the Miño River, are the Roman Baths; another testimony to the survival of the city’s great public works. They probably date back to the Upper Imperial period, between the 1st and 2nd centuries AD. This complex, unique in all of Galicia, was declared a Historic-Artistic Monument in 1931, due to its importance in Roman culture. The public baths were part of the Roman way of life and represented the magnificence and power of its rulers. 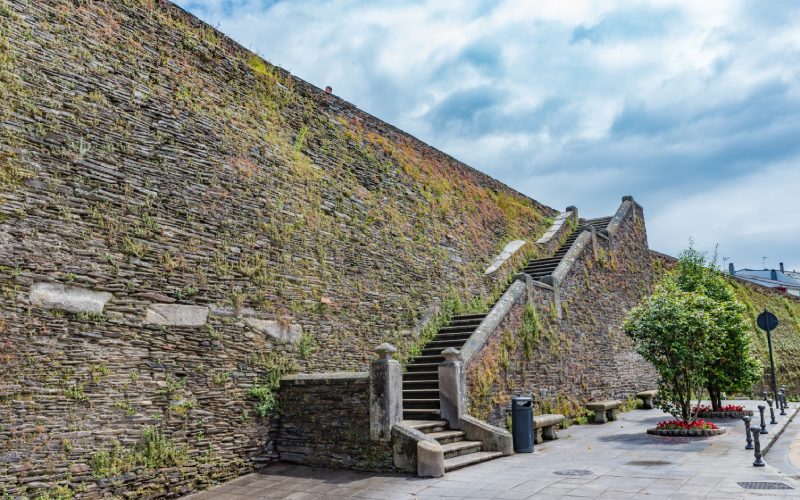 Other places of interest where a large collection of important Latin remains can be seen are the Domus do Mitreo Museum and the San Roque Archaeological Centre. In the Plaza Mayor where the old Roman forum was located is the Casa dos Mosaicos, which houses the remains of a domus in which the heating system stands out. It is also possible to see a 4th century Roman pool in the Plaza de Santa María; as well as the remains of a temple next to the Círculo de las Artes building. 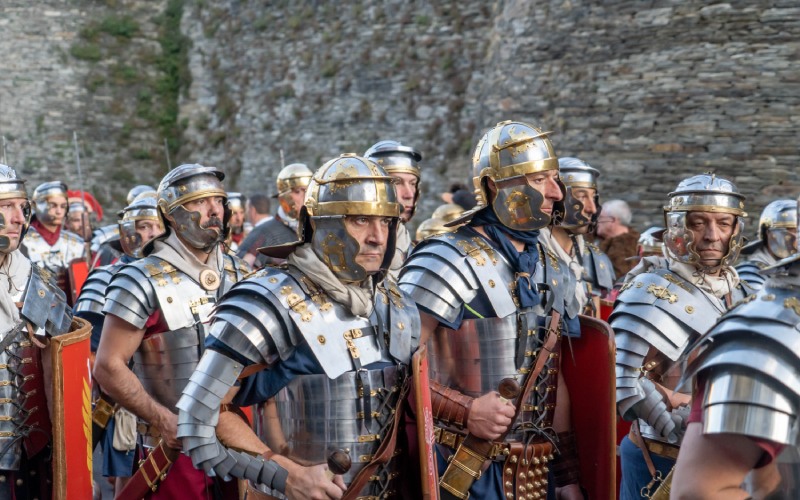 Today it is possible to return to Lugo‘s Roman past thanks to its Arde Lucus festival, one of the most important Roman historical events in Spain. Between the 25th and the 28th of June every year; the people of Lugo and visitors replace their daily clothes with the typical Roman ones. The celebration includes activities such as a Roman circus, Celtic weddings, dances or the sale of slaves. Although it began as a modest initiative in 2002; today it is one of the main tourist attractions, considered Festival of National Tourist Interest.

Galicia, Lugo, Roman sites, walls, Way to Santiago
It may interest you...