The medieval town centre and the remains of the Castle of Aínsa capture the historical spirit of the place. Here tradition places the beginning of the Reconquest of Aragon.

The local historic centre requires a slow walk. In this way one can go back to the time when the first Aragonese launched their counterattacks against the Mohammedans. Thus, what you see in Aínsa is the whole rather than the parts.

One of the main attractions of the town is its position near the Ordesa and Monte Perdido Natural Park. If you prefer more urban surroundings, Jaca and Huesca are interesting alternatives.

According to tradition, in the year 724 the battle that marked the beginning of the Reconquest in Alto Aragon was fought in its vicinity. García Ximénez, a noble Basque considered the first king of Sobrarbe and Aragon, gathered a large contingent. With him he rebelled against the Muslim domination.

Before the battle, a luminous cross appeared on a holm oak before the Christian contingent. This was considered a divine sign that would determine the victory over the Muslims. With morale sky high, they defeated the Mohammedans. The legend of the Sobrarbe Cross is part of the founding history of Aragon, so it is reflected on its coat of arms.

However, no traces of a stable Muslim community have been found in the area. During the 11th century the Castle of Aínsa was part of the Christian defensive line. From it the population centre that would give rise to the historical municipality was formed. Its strategic location on a promontory, next to the rivers Cinca and Ara, made it of great importance. In this way it was consolidated as a passing point and a great commercial square from the beginning. At this time it received some walls.

Aínsa belonged to the Kingdom of Nájera-Pamplona and later to Aragon. During 1085 Sancho Ramírez gave his son, Prince Pedro, the Counties of Sobrarbe and Ribagorza. In addition, the category of these was raised to that of a kingdom. In 1124, Alfonso I el Batallador granted him a town charter, as well as a charter for repopulation. With these privileges it was equated to Jaca, being exempt from lezdas and other benefits.

In 1593, Philip II decided to reinforce the Aragonese border with France. As a result, the Italian engineer Tiburcio Spanocchi was commissioned to modernise the Castle of AÍnsa. The additions allowed the fortress to resist possible artillery attacks. Such maintenance allowed the citadel to be active until the 18th century.

In 1936, the entire artistic treasure and the archive of the parish church were stolen or destroyed. The stewed wooden sculpture of the seated Virgin with child (13th century) from the Parish Church of Santa María was brought from neighbouring Tricas. Nowadays, Aínsa is an important centre of active tourism in the Huesca Pyrenees.

What to see in Aínsa

The position, heritage and environment of the population have made it a great base for mountain activities. It is also worth noting its proximity to the Ordesa y Monte Perdido Natural Park and the Sierra y Cañones de Guara Park. Turning now to what we can see in Aínsa, its town centre was declared a Historic-Artistic Site. The whole shows a medieval layout with two parallel streets. They preserve the aspect of the popular architecture of the area.

In the centre of the town is the Plaza Mayor. It is a wide space with porches on two of its sides. Moreover, one of its ends is open to the Castle of Aínsa. This construction was originally Romanesque, from the 11th century. However, it was extended during the 17th century until it achieved its current appearance as a citadel.

The Castle of Ainsa still has moats, towers and a keep. In a section of the original complex is the Eco Museum and Visitor Centre of the Pyrenean Fauna, where the Bearded Vulture Foundation carries out its work. 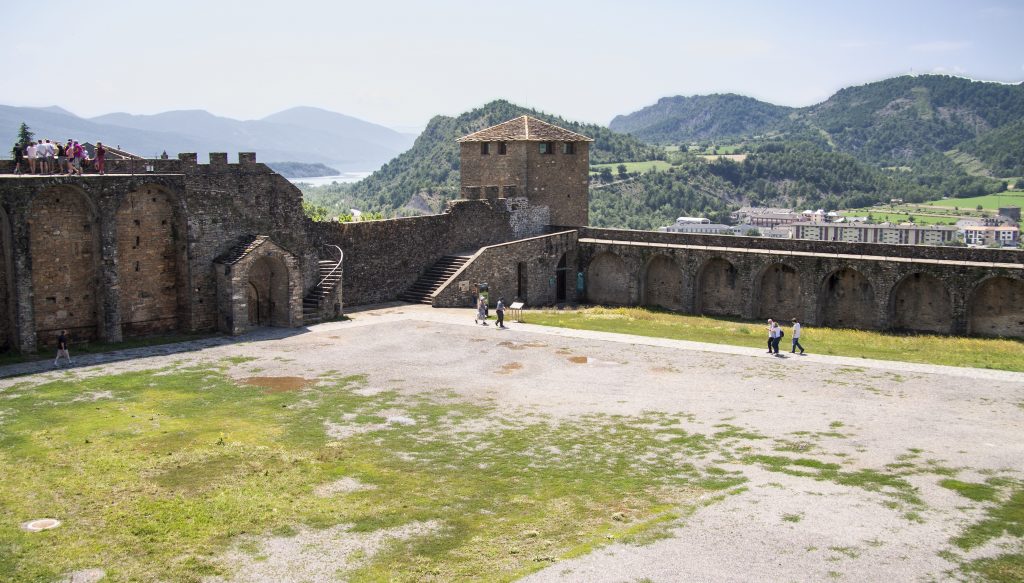 Remains of the Castle of Aínsa. | Wikimedia

At the other end of the Plaza Mayor awaits the main temple to be seen in Ainsa. The Parish Church of Santa María (11th and 12th centuries) has a splendid Romanesque style. Its front, with five archivolts, and its tower stand out. It is also one of the most remarkable temples in the region, both for its size and its eminent defensive character.

Examples of popular architecture to be seen in Aínsa are the Casa Arnal (16th century) and the Casa Bielsa. On the façade of the latter, several geminated windows stand out. The Museum of Traditional Arts and Crafts provides an insight into what local life was like not so long ago. In this way, it keeps alive the memory of traditional trades such as pottery, tinsmithing or basket-making. The building that houses it is the Casa Latorre.

Finally, ending with what we see in Aínsa, it is time to move to the outskirts. There, the Baroque temple of the Cruz Cubierta stands. This iron cross, which rests on a stone kermes oak, is the symbol of the town and its region. Every two years, on the last Sunday in August, the Ainsetans commemorate the battle that started the Aragonese Reconquest. The name of such representation is La Morisma.

Parkings in the castle, Avda. Ordesa and Avda. Sobrarbe.

Here are the best festivities to see in Ainsa: San Sebastian (20th January) and, in addition, Fiestas Mayores (14th September).

Other events to see in Ainsa are the following: Bonfires and Festivals in honour of the Bearded Saints (January), Ainsa Fair (first Sunday in February), Christmas descent on the Cinca River (May) and Ainsa Castle Festival (July). Also La Morisma (Sunday closest to 14 September, on even years), Expoferia del Sobrarbe (first weekend in September) and “Punchacuva” artisan wine fair (December).