The controversial city of San Jorge

The city of Cáceres is a World Heritage Site by UNESCO. There are numerous churches and palaces in its vast historic city centre, both inside or outside the city wall. It was “extremadura” or border very disputed between Muslims and Christians, or between the two political parties. Furthermore, the city is crossed by the Way to Santiago. 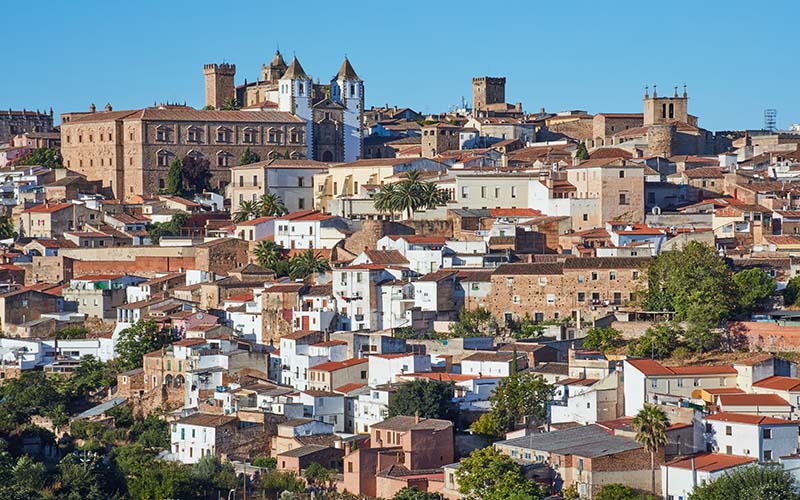 Plan your trip to Cáceres

Visiting the city of Cáceres takes two days. If you want to stay longer, you can visit nearby villages, as well as try tourism active activities. There are also amazing spots for bathing will make you not missing the beach at all. On the other hand, we propose a route through the north of the province that will surely not leave you indifferent: the monumental city of Plasencia or the national park of Monfragüe are some of its stops. It is also worth to mention that the Vía de la Plata (Silver Way) goes past Cáceres.

There is a large gastronomic and accommodation offer, in which Torta del Casar (types of cheese) is very popular. It is a cheese with Protected Designation of Origin.

By the year 25 B.C. Romans established two settlements around a hill. They founded there the colony of Norba Caesarina. The place became an important city of the Silver Way. Therefore there are many remains from the Roman road.

At the end of the 3rd century insecurity caused the construction of a wall in Cáceres. The western door, also known as the ‘Arco del Cristo’ (The Arch of the Christ), is still preserved. Those defences did not avoid that in the 5th century Visigoths razed the ground. Such the punishment was, that the city kept almost depopulated till the Muslim occupation. 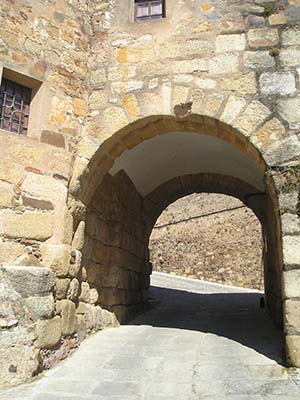 The Arch of the Christ.

In 1147, the small surviving village built a new wall. This was built with adobe by Almohad Caliph Abd al Mu’min. Thanks to this wall, the city became a stronghold from which to defend against Christian raids.

Around 1164 the city was taken by legendary Portuguese knight Gerardo Sempavor. Three years later, when he was captured in Badajoz by people from León, he gave them Cáceres in exchange for his freedom. Nevertheless, five years later the city was reconquered by Almohads.

From beginning of the 13th century the city was frequently attacked by people from León. It resisted a very long sieges. Finally, King Alfonso IX conquered the city on the 23th April 1229. As this day was the day of San Jorge, he became the Patron Saint of the new city. 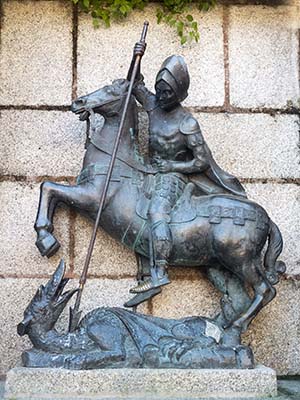 The king gave a great site to Cáceres that attracted numerous inhabitants. They organised themselves into two different parties: people from León and people from Castile. Both would compete during a long period of time in order to get the 12 alderman posts of this city dependent on the king. Every party lived in their own neighbours, that actually worked as independent villages. Street fighting was common. Such conflicts would not end till 1477 when the Crown started to choose the authorities. As a result, rows ended.

Population seriously suffered during the Portuguese Restoration War. Together with Alcántara, Badajoz, Plasencia, Mérida and Trujillo, Cáceres bought a vote in the Cortes de Castilla (Castile parliament) in 1653. Thus, they wanted to defend their interests more efficiently. 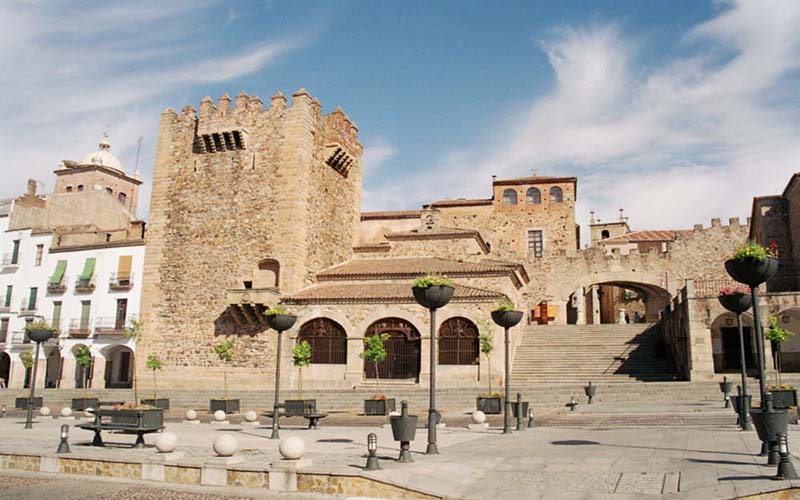 At the end of the 18th century Royal Court was established in the city. Thus, the city was declared capital of Alta Extremadura in 1822, to the detriment of Plasencia.

And then later, in 1882, Alfonso XII gave it the title of city. Years went by until 1936 when Cáceres was taken without fight by the revolted forces against the Republic. In the following months a suppression was triggered that ended with the death of more than five hundred people.

On the 23th July 1937, the Republica air force bombed the city. As a result, 35 people died and the Palace of Mayoralgo and the Church of Santa María, two beautiful places you must visit in the city of Cáceres, were damaged. 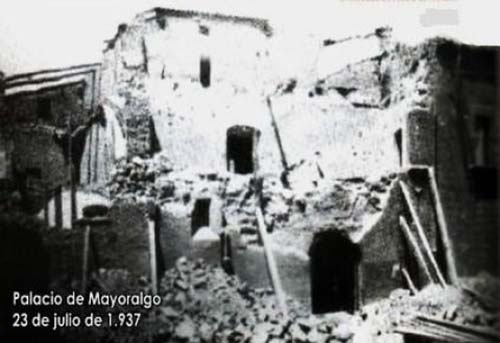 Best places to go in Cáceres

The Barrio Bajo: the Monumental city

This travel guide begins in the “old side” or “monumental city”. The Barrio Bajo is also known as neighbourhood of Santa María because of the Procathedral Church of Santa María. It was built in the 15th and 16th centuries and it is famous because of its bell tower with three areas. Inside there are three naves and rib vaults from the Gothic style. Its important main altarpiece date from the 16th century and is dedicated to the Asunción de la Virgen. 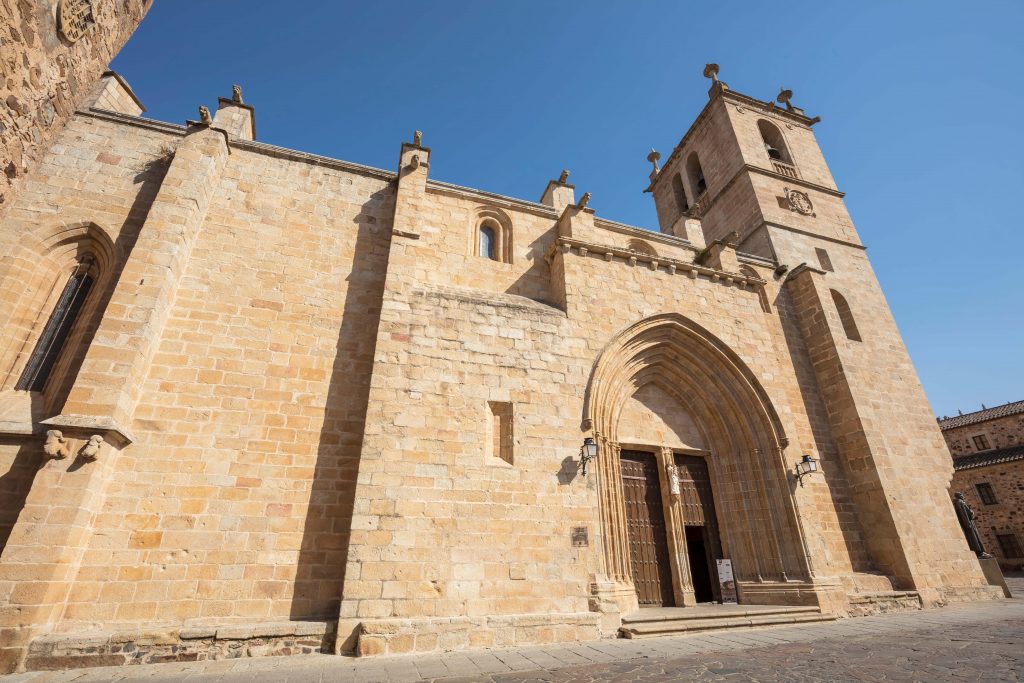 Just outside the temple, in the corner, is the sculpture of San Pedro Alcántara. It is a work by the contemporary artist Enrique Pérez Comendador. Acording to the legend whoever touches his feet will be lucky. That is why is really damaged at the present time.

In the same square is the Palace of Hernando de Ovando (16th century), which has an interesting cloistered courtyard. The Bishop Palace is identifiable by its elegant facade. The noble houses of Mayoralgo, Moraga or the Golfín-Toledo family are also worthy of attention. Another outstanding enclave is the Palacio de los Golfines de Abajo (15th century). It holds the most beautiful Plateresque front in the city.

In the nearby Conde de Canilleros square is the Toledo Palace. It was built between the 14th and 17th centuries and promoted by the Aztec princess’ grandson Isabel de Moctezuma. This indigenous nobel got married with the captain from Cáceres Juan Cano Saavedra. Today it houses the central office of the Provincial Historical Archive.

Close to the back side of the cathedral church is the Palace of Carvajal, dated from the 15th century. It houses the Tourism Office nowadays. It has the popular corner balcony, the coat of arms and the voussoired round arch. In the Tiendas street you can enjoy the amazing view of the Espaderos tower. Isabel I ordered the removal of the battlements so that their aggressive owners would not use them as defences.

Another outstanding square in the city is that of San Jorge There is the Church of San Francisco Javier, in addition to the Colegio de la Compañía de Jesús. Both buildings date from the 18th century and make a beautiful Baroque collection of historic buildings. 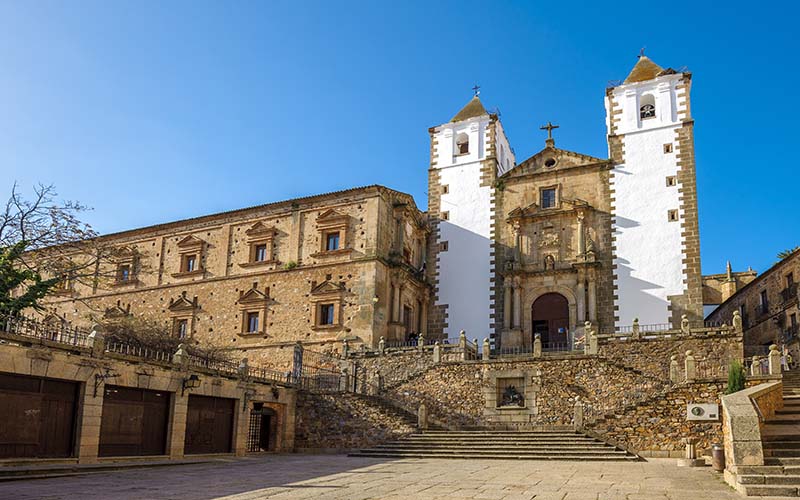 The other Barrio Barrio

Now we move to the other Barrio Bajo, that of San Mateo. The was built on the site of an ancient mosque. In the same square is the spectacular Palacio de los Golfines de Arriba (15th and 16th centuries), an authentic fortress-house. It preserves a beautiful two-storey porticoed courtyard and a keep. Nearby is the Gothic Convent of San Pablo and the Palace of las Cigüeñas. Finally, the Palacio of Las Veletas (15th century) stands out. It houses the Museum of Cáceres, where important archaeological, fine arts and ethnographic collections are exhibited. 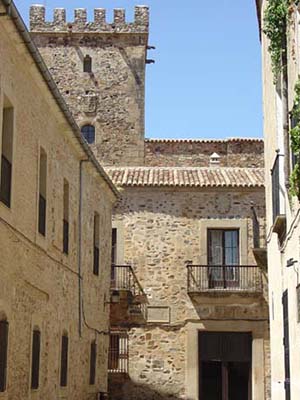 In the vicinity of the Plaza de San Mateo, is the area of the Adarves. This is the name given to the paths that surround the wall inside it.

The Jewish community was really present in the city and it occupied two areas. On one hand, the Judería Vieja (Old Jewry), inside the walls. On the other hand, the Judería Nueva (New Jewry), outside the wall. The first one coincides with the neighbour of San Antonio and it has the characteristic narrow streets.

Outside the city walls

Outside the walls is the Plaza Mayor, presided by the City Council (19th century), next to the entrance to the monumental city. It was the place used to hold the market and there are also the Baroque Chapel of La Paz (dated from 18th century) and the Tower of Bujaco, built in a Romanesque style in the 12th century. It is 25 metres high, so it is one of the symbols of the city. There are finally in this area named because of two parish churches: Santiago and San Juan. 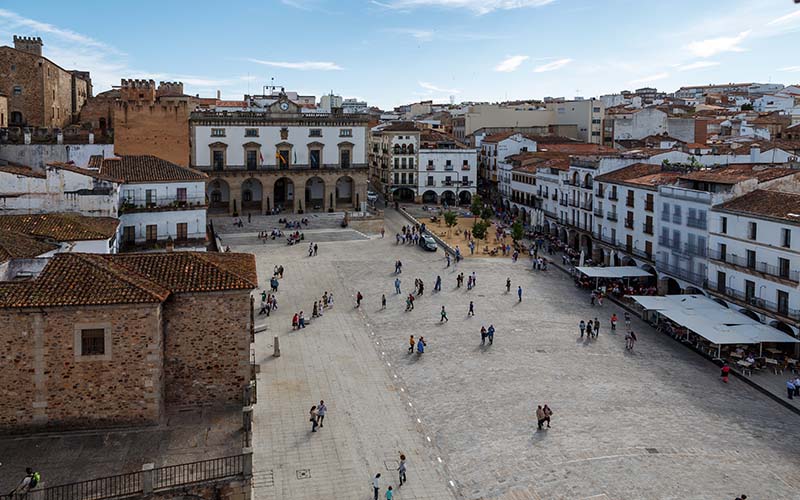 The Church of Santiago de los Caballeros is in the area of Caleros. Its Gothic facades will call our attention outside and the stunning main altarpiece by Alonso de Berruguete in 1557 inside.

The Church of San Juan Bautista (13th to 17th centuries), with its interesting Renaissance grille, is the protagonist of the San Juan neighbourhood. There are numerous palaces here, including those of Paredes-Saavedra (15th-16th centuries) and the Marquis of Monroy (14th century).

There are numerous places to park in the urban area. You can leave your car in the car parkings of Avenida de España, situated next to the historic city centre and Don Manuel (C/Margallo, 11). Moreover, there is a free car park area in the car parking El Príncipe.

Cáceres, Extremadura
It may interest you...