The first capital from Jaca

Its rich history and beautiful environment have made Jaca the main touristic centre in the Pyrenees of Aragon year round.

Plan your visit to Jaca

There are many things to do and visit in Jaca concerning its heritage and cultural characteristics; especially its cathedral, citadels and museums. You will probably need more than one day to visit all of the interesting places, however, if you don’t have the oportunity to go for a longer time, we recommend you visit the Saint María de Iguacel chapel.

If you have plenty of time you should take the A-1205 road to the South to visit one of the most important spots of the are: the Saint Juan de la Peña monastery. In Jaca there are also many year-round touristic activities in the Natural Park “Los Valles Occidentales.” Heading in the direction of France, you can find the Astún and Candanchú ski stations. In addition, the railway station of Canfranc is another a beautiful place with a lot of history

The Lacetani people had a fortress land in 195 b.c. where the Roman consul Marco Poncio Catón, with the help of the enemy tribe of the Suessetani, defeated them. As the tradition says, in 250 b.c., Saint Lorenzo, born in Huesca, sent to Jaca the Holy Grail (Jesus’ cup he used during the Last Dinner), and guarded it here for centuries. In the 5th century the Goths seized the square, naming it Apriz.

For many years after, Jaca was dominated by French counts, defending the city from the Moorish raids.

Ramiro I was the first King from Aragon to live in Jaca, and his son Sancho Ramirez owned the charters from 1077, naming the city the political and Episcopal capital of the Aragón kingdom. Because it was a resting point for pilgrims going to Santiago de Compostela, the city kept growing, but this growth was interrupted in 1096 when the capital of the kingdom was moved to Huesca. The bishop also moved to the new capital, causing the division of the diocese in 1571 and the renovation of the entire cathedral, removing all its Romanic elements.

By the end of the 16th century Felipe II built a fortress around the city to protect it against French invasions. With the edification of the Citadel, Jaca became one of the main fortress squares in the frontier.

In 1705 the Archduke Carlos of Austria reined over most of Aragón. During this time, Jaca was the only city from Aragón that was loyal to the Felipe V kingdom. Jaca was besieged by Habsburg followers, aided by Bourbon troops. Jaca then received the title of a noble, loyal, and victorious city.

In 1808 the French troops dominated the citadel, keeping possession until the end of the war. A century later the medieval wall was destroyed to facilitate the expansion of the city.

On December 12, 1930, during the dictatorship of the General Berenguer, Captain Fermín Galán stirred up his troops to the kingdom government. Right after he went to Huesca where he would meet the rest of the troops.  Galán and all the military men ran away, however the following afternoon they turned themselves in to the mayor of the town of Biscaurrés. They were taken to the Military government of Huesca and were subjected into a War Consensus, where he and his mate, General Ángel García Hernández were punished by death on December 14. Due to the way they were treated and the indignation of the population, four months later the II Republic was established in Spain.

What to see in Jaca

The main attraction in Jaca is its Romanic cathedral of Saint Pedro, the most ancient Romanic cathedral in Spain. Nevertheless this building had many constructive epochs between 1076 and 1131; it was also reconstructed using original elements in the end of the 16th century and again in the 18th century. Amazing aspects of this building are its main facade and the south portico, in which there are architectonic elements like the monogram of Chirst represented as XP: the Crismón. It also has the Jaca-style checkers moulding, identifying dioceses in the South apse, the only one that entirely preserves the original Romanic style. The interior is remarkable for the stone walls with low relieves. Next to the side door you’ll find the important 77 centimetre Jaca-baton. In the cloister you can visit the Diocese Museum, exhibiting a great collection of Medieval art, especially paintings and Romanic capitals. In the apse you can observe the paintings of Manuel Bayeu, brother in law of Francisco de Goya. Finally if you are curious about history, you should visit the Saint Orosia chapel, of Baroque style, that refers to the Aquitaine princess Orosia.

Another monumental milestone is the city of the Citadel which was constructed near the end of the 16th century, taking up a great deal of land. Its remarkable main door is made of Materialist style, in which we can see the Habsburgs’ coat of arms. This is one of the only two pentagonal citadels preserved in its entirety, where you can visit the Military Miniatures Museum.

The Carmen Church, built in the mid 17th century in a mannerist style, contains Gothic reredos that come from the church of Ruesta, an almost abandoned town by the Yesa swamp. The Benitas Monastery was built in the year 1555 above the remains of an ancient Romanic Church that contains the sarcophagus of Mrs. Sancha, daughter of Ramiro I, and one of the main sculptures of the Romanic style in Aragón.

The Clock Tower, known by the name of Jail tower, is a Gothic style construction built in the mid 15th century. At the bottom of this building there is also the Ramiro I Sculpture. 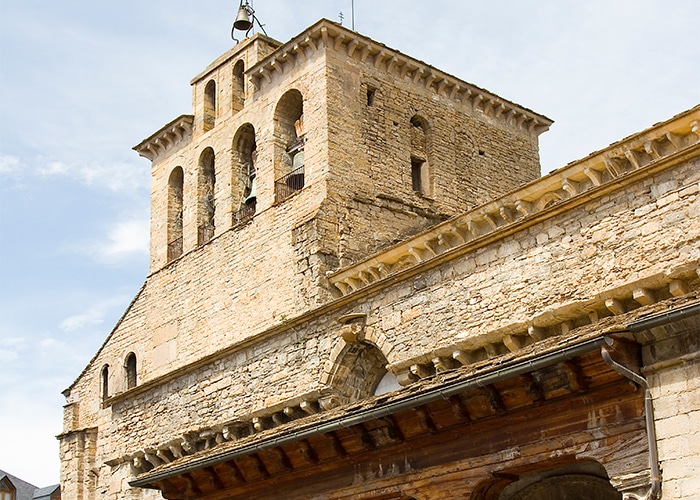 In the middle of the Mayor Street, you will find the current historic and commercial site of the city where the council is located. Built in 1544, this remarkable building also has an interior park where you can see the ancient bells of the Clock Tower.

7 km away from Saint Cruz de Serós is the Saint Juan de la Peña Monastery, a buildings complex that carries styles from the pre-Romanic to the Classicit style of the end of the XVIII century.

There are also small Romanic churches spread around the surrounding towns, including the Saint María de Iguacel hermitage, dating back to the 6th century.

In terms of its gastronomy, Jaca has many outstanding bakeries, like the famous Echeto, La Suiza and La Imperial. All of them selling delicious pastries like “kisses”, pretzels, “jaqueses” or “condes de jaca”.

Jaca is also an important sport centre for winter, not only because of its proximity to the Candanchú and Astún ski stations, but also because of its ice-sports. In its ice-rink many people practice ice-hockey and ice-skating. José Antonio Biec, captain of ice-skating in this centre, was the first Spanish person participating in the Red Bull Crash extreme skating competition in 2013.

In addition, due to its proximity to the Pyrenees, you can find any kind of mountain activity in Jaca