This historical city, on the banks of the River Carrión, has an gorgeous monumental heritage, beautiful traditions, and innumerable spots to enjoy the green areas of the city. Palencia is the onset of one of the best routes of the Romanesque Castilian style. Visit Spain !!!

What to see in Palencia

Our visit starts in the Gardens of the Station to head to the Mayor Street, whose buildings’ façade have amazing sculptures. For example, the building in number 36 of this street has the beautiful Villandrando School, built in 1911 in a neo-Gothic style, with the spectacular ceramic panels by Daniel Zuloaga.  If you keep walking you will eventually reach the Plaza Mayor, a small space built in the 17th century and presided over by the homage to the sculptor born in Palencia, Alonso Berruguete. Also here you can visit the City Hall (neoclassic, 19th century) and San Francisco Church (13th century). Very close to this area, the Provincial Council (1921) stands outs because of the modern style employed to build it. In the surrounding area, Santa Clara Church, from the 15th century, hold inside a Christ found in the sea in the 14th century. At the end of the street, you can see the Gothic San Lázaro Church (14th century), which was set up by Rodrigo Díaz de Vivar, the Cid.

Palencia is one of the cities with the highest proportion of green areas per capita in Spain. One of the most outstanding parks is the Paseo Salón of Isabel II, created in 1830. Other gorgeous parks are Huertas of the Obispo, Sotillo of the Canónigos, and Huerta Guardián. Next to Isabel II Park, you can see the Iron Bridge, also known as Abilio Calderón Bridge, built in 1911. Going through the Mayor Antigua Street, we will reach San Miguel Church (12th and 13th centuries), in the quarter of the market of medieval buzz. The temple stands out by its gothic tower (13th century), the symbol of the city since it was here where the Cid married Jimena Díaz, and where every January 1st holds the rite of the Baptism of the Christ Child. Near this area, Nuestra Señora of the Calle Church, built by the Society of Jesus between the years 1584 and 1599, holds inside the patron saint of the city, the so-called ‘Virgin of the Calle or the Morenita’.

If you keep walking via San Marcos street, you will find the Cordón House (16th century), which houses the Palencia Museum (a collection from the Paleolithic times to the Middle Ages). Going a bit further, you will reach the Mayor Bridge, from the 15th century and enlarged in the 18th century. Come back to the Mayor Antigua Street in order to visit the San Antolín Cathedral, so-called the “Unknown Beauty”:a Visigothic basilica form the 7th century, turned into a Romanesque Cathedral by Sancho III. It has five entrance doors, out of which the one of the Virgin or the Bishop is the most outstanding. The interior of the temple holds an interesting altarpiece (16th century), the Sagrario Chapel, and San Antolín crypt. The latter is divided into three main parts: the first one is a small nave from the 11th century in a Romanesque style; at the back you can visit the remains of the Visigothic church from the 7th century; and finally the chapter house and the cloisters (where you can enjoy the Cathedral Museum, housing works by El Greco, Zurbarán, Valdés Leal and Pedro Berruguete). 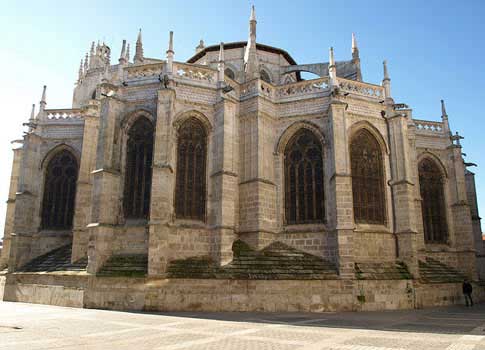 The neighboring Diocesan Museum holds inside some Romanesque pieces and sculptures from the 13thand 14th centuries, Mudejar coffered ceilings and some paintings by Pedro Berruguete and Juan de Flandes. From this museum we can visit Santa Marina Church, a temple from the 18th century with medieval remains, and San Pablo Church (15th century). It is worth to pay a visit to the Mayor altarpiece, Juan de Rojas, María Sarmiento and Marquis and Marquise of Poza Sepulchers inside. For contemporary art lovers, we highly recommend coming by the Díaz-Caneja Foundation, where 66 paintings dealing with the avant-garde movement by Díaz-Caneja are shown in temporary exhibitions. Finally, you can visit the Otero Christ, built upon a hill in the north of the city. It is a 20-meter height monument built by Victorio Macho, from Palencia, in 1930, and it is considered the fifth biggest figure of Christ in the world.