The most beautiful flysch in the world

Zumaia is situated in the center of the Basque coast with beautiful scenic surroundings well known for the amazing flysch (rock strata) on its cliffs. This city was also a center for Spanish and European art and thought between 1914 and 1936. Zumaia is also known for the filming of various scenes from the popular film, Ocho Apellidos Vascos.

Plan your visit to Zumaia

Zumaia is an old resort town and trading port. A walk through the old town can be completed in one morning as Zumaia’s best attractions are its natural geological phenomenons known as the parque del flysch (flysch park). Zumaia is connected to the Northern (or costal) Camino de Santigo along with the neighbouring town of Getaria. Further inland, there’s a road leading to the Zestoa resort town, where you can find the Ekain cave and the old provincial villas of Azpeitia and Azcoitia as well as the santuario de Loiola (Loiola sanctuary, birthplace of San Ignacio). A few kilometres to the west, up the steep costal road, you’ll also find the Deba vacationing town.

In 1347, King Alfonso XI of Castile granted a Town Charter with the contents of the Charter of San Sebastián to populate the marshy Zumaia Village. Its church, just 30 meters from the mouth of the Cantabrian sea, served as an important defensive bastion.

Zumaia was one of the 18 villas celebrated in the Guipúzcoa General Assembly which gathered in the city on December 27, 1620 to name San Ignacio de Loiola the patron saint of this territory.

In the 18th century, many of the marshes dried between the Urola and Narronda Rivers, which later became urbanised for living and industry. At the end of the 19th and the beginning of the 20th century the town experienced an industrial boom with the arrival of the railway and several cement factories. This coastal and industrial town was also the first in Spain to use a diesel engine. 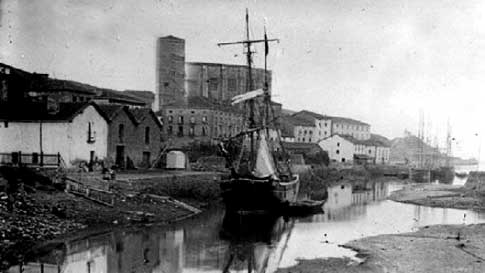 In 1914, the painter Ignacio Zuloaga set up his residence in the estate known as Santiago-Etxea which was later visited by intellectuals such as José Ortega y Gasset and the bullfighter Juan Belmonte. From then until the outbreak of the Spanish Civil War, Zumaia and its celebrated Hotel Amaya became a summer resort for some of the best intellectualists, artists and scientists in Spain.

What to see in Zumaia

Zumaia is one of the most beautiful sections of the Gipuzkoa coast located at the junction of the Urola and Narrondo rivers which creates a bay surrounded by green mountains. The town, with its narrow and steep streets, still retains its medieval layout. The main building in the East is the Iglesia Parroquial de San Pedro (8th century); a church-fortress built in a gothic style built during the Middle Ages. It is a building of great simplicity and beauty where you can find carvings and table pieces of extraordinary quality such as the altarpiece made by Juan de Anchieta, a Christ sculpture by Quintín de Torre, and a painting by Ignacio Zuloaga, which was a gift from the artist to the church. Behind the bars, there is an excellent votive table from the 15th century that was a gift from Juan Martínez de Mendaro, who captained a Castilian square against Gibraltar.

In front of the temple, you will find the Zumaia Jauregia, a four-floor tower of Medieval origin. This building was constructed by the Zumaia Gamboa family and it has withstood bloody battles against other groups from this region. Close by is the Casa de los Olazábal and a little past it, in the Mercado plaza, is the City Hall and the Carmelite Convent. You’ll also find the spectacular Palacio de Foronda, constructed at the beginning of the 20th century as a summer house and now serves as a Cultural Center.

Another must see in Zumaia is the Ermita de San Telmo, situated in the Itzurun beach, where the final scenes of the popular film Ocho Apellidos Vascos were filmed. From here, you can catch the beautiful views of the flysch. Flysch is the geological term that describes the emergence of the hard tectonic plates to the surface (formed by limestone or sandstone) attached to other soft (clay and loam) layers in a process that allows you to see the outer crust on the land. This beautiful natural phenomenon is located in the cliffs and beaches between Zumaia and Deba. There is also a 16th century chapel, originally the home of a Society of Merchants.

Zumaia Port with the Iglesia de San Pedro at the center

To enjoy the flysch, you can take a tourist boat that will make its way through the coast from the Zumaia port. You can also go up the hill to the San Telmo chapel where you can see a panoramic view of the geological formations. Finally, for a more complete understanding of the phenomenon, you can visit the Centro de Interpretación Algorri, located in the center of town.

Towards Getaria, next to Santiago beach, you can see the Museo Zuloaga (Zuloaga Museum), housed in the old estate of the painter, where you will find works of the artist Ignacio Zuloaga. The museum also has a Romanesque, 8th century chapel dedicated to Santiago Apóstol. Another Zumaia museum is the Casa-Museo de Julio Beobide, the famous sculptor.