The village from the sea

Deba is an attractive and historic resort town that combines heritage, prehistoric caves, pristine valleys, and flysch, (rock formations of sediment which alternate shale, limestone or sandstone, and clay) on its coast.

Plan your visit to Deba

Apart from beaches perfect for a summer getaway, Deba has multiple landscape plains to enjoy. Walking through the small old time and strolling around the beautiful beaches will not take more than a day. However, if you have more time, you can enjoy hiking through the flysch park and tidal zones, situated in the east towards Zumaia. To the west of the city, the small fishing town of Motrico is also worth a day trip. Inside of the city, you will find Zestoa and the interpretation center for the Ekain cave (which is located inside of the Deba municipality).

In 1294, the Castilian King Sancho IV mandated a town charter to Monreal, a small enclave close to the Deba river. In 1343, its inhabitants obtained a new town charter from Alfonso XI to move its location to the coast to engage in fishing and trade activities. The new town of Monreal (now Deba) is strategically founded near the mouth of the Camino Real coming up the bank of the Deba river to the town of Leintz-Gatzaga, later coming up on Victoria. Through here, merchants came to trade goods such as luxury items, Castilian wool, and iron foundries (especially weapons and farming tools). Deba’s port also practiced the lucrative sport of whaling, when the city would compete against other coastal communities. 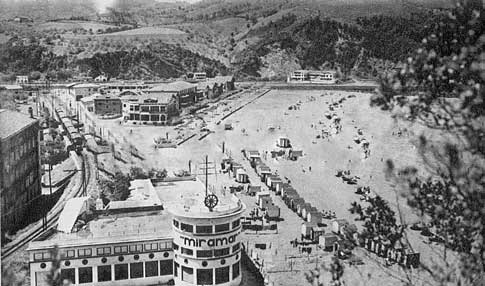 Deba’s economic model began to decline in the 19th century. The arrival of the railway and the allure of summer tourism made Deba reorient their economy towards tourism. Visits from Queen Isabel II prompted Deba to construct hotels, spas, and other necessary infrastructure to appeal to tourists from Spain’s interior, especially Madrid. Thus, Deba’s beach became one of the main points of the Basque coast until the 70s when tourism started to decline. These days, tourism has been revitalised, and Deba’s beautiful beach is once again a must-see in Basque country.

What to see in Deba

Deba is a town with three urban centres- Deba, Itziar, and Lastur- with some 130 small villages spread across the area. The village, also called Deba, has a small bay with a beautiful beach. The city center is located around the main road, Hondartza Kalea, that runs north to south from the Astillero and Lersundi streets.

A great way to start your journey through Deba begins in front of the bridge over the river on Astillero street. From there, you will find Palacio Aguirre or Casa Valmar, from the 15th century, with a remarkable stone facade and ornate, caved eaves. On the same road, you will come across the Sasiola Tower, 18th century, which is one of the last remaining strongholds from the Medieval village.

In the Plaza de los Fueros, which becomes a bullring during the holidays, you’ll find the city hall; a notable example of Baroque architecture built in 1747. Another important plaza in Deba is the Iglesia, in which you can find the main building in Deba, declared a National Monument: the Iglesia Parroquial de Santa María de Deba, that was constructed between the 15th and 16th centuries. It is a large building with a polychromatic facade and a remarkable, late-Gothic cloister.

The Casa Aldazabal-Murgi is a great example of traditional architecture with outstanding masonry balconies and wrought iron railing. It is located in Ifar Kalea, a quiet street down which a calm walk will take you towards Casa Bañez, a rectangular building with interesting faces carved into the upstairs windows.

Deba forms a part of the Basque Coast Geopark and is home to beautiful valleys and coasts. A few kilometres from the interior is the Itziar neighbourhood, where you can find the Santuario de Itziar, a building erected in the 16th century on the Romanesque, 13th century church. The temple contains a Plateresque altarpiece worthy of seeing as well as a sculpture by Jorge Oteiza.

In your journey through the city, don’t forget to visit the Sasiola Convent Hospital (16th-17th century); an important enclave of the Camino de Santiago. There are also many important chapels spread across this area such as Santa Catalina, which serve as important landmarks on the Northern Camino de Santiago. Other interesting buildings to see around Deba are the San Sebastián de Elorriaga and the San Nicolás de Lastur. 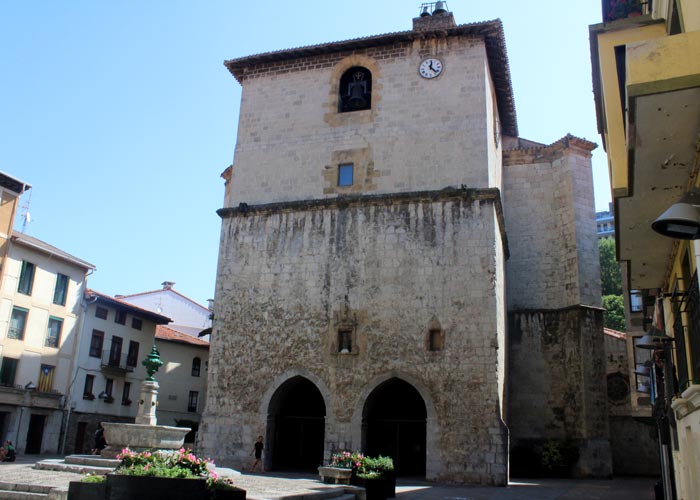 From Itziar you can access the beautiful Lastur Valley, with forests and Medieval ironworks. It is also the source of an excellent stone known as “la duquesa de Lastur”, used by famous sculptors like Jorge Oteiza.

Lastur is also well known for a special breed of bulls, raised breeders or Saka. Many weekends offer tours through the small, 19th century bullring which is one of the oldest in Euskadi. Very close to Deba, you’ll find the famous Ekain Cave, which is unfortunately not visitable for preservation reasons. You can, however, find an exact replica as well as an interpretation center in the nearby Zestoa.

Finally, throughout the stretch of coast up until Zumaia you can explore the spectacular cliffs and flyschformations, which are layers of the Earth’s crust emerging to the ground and make for an amazing spectacle.