Mitriku is a town filled with high houses hung on the slopes of Mount Arno, whose steps open up to a small bay. Its coastline, considered one of the most beautiful sections of the Basque Coast, as well as its urban peculiarities, make it one of the most picturesque places in Guipúzcoa.

Plan your visit to Mutriku

The complicated urban framework of this marine village and its port requires a one day journey. An easy, standard plans is to go through its beautiful street on the coast to spend a day in Deba bathing in its beaches. Mutriku is a traditional place for food during a weekend, especially with its neighbouring towns, taverns, and bars. There are not many places to sleep in Mutriku although there are various camping locations close to Saturrarán beach (very close to Ondarroa).

There is a popular saying that reads “Mutriku, rich port, where you come with a mule and leave with a donkey”, an expression that summarises the opulence of the fishing, trade, and privateering of this small town situated at the west of the province.

In the high Middle Ages, the Deba river was considered the muga (border) between Guipúzcoa and Vizcaya, so that the Mutriku territory would be attached to the latter. In 1200, in times of Spanish conquest, the first written reference appeared from Alfonso VIII who deemed Mutriku part of the Order of Santiago.

The village confirmed its Town Charter in 1237, when the history of Mutriku began, although its is speculated that it may have began prior during a visit from Alfonso VIII to Guipúzcoa in 1209. Granting this town surely served as a protective border for the Lordship of Vizcaya (independent then, though linked to his kingdom). The walled town can be found inside of a small, sheltered bay through the 680 m high Mount Arno, which offers a sheltered harbour for the prevailing winds from the northwest. The peculiarities of its steep terrains has made this town grow slowly, with narrow roads in which fisherman houses are pressed upon one another up until the port. During a fire in 1553, over 700 of these wooden houses were burned in the town.

In 1761 Cosme Damián de Churruca, the indefatigable sailor, cartographer, militant, and mayor of the town was born. He died heroically during the battle of Trafalgar, commanding the ship San Juan Nepomuceno. Days before the battle, sensing the fate that awaited them under the inept comment of French admiral Villeneuve, he wrote to his brother “if you come to know that my ship has been taken prisoner, tell them I have died”.

Years later, in August of 1794, Mutriku was looted by the French revolutionary troops. 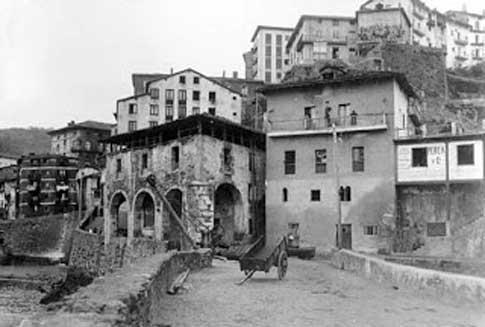 In 1826 the fishermen’s association established a special horse-drawn carriage system that, every other day, delivered hundreds of pounds of fresh fish to Madrid; a journey that lasted 56 hours. This innovation lead to the prosperity of its famous fishermen.

What to see in Mutriku

The historic center of Mutriku, declared a Monumental Complex in 1995, still retains the flavour of its past with its narrow, steep streets. Its main monument is the Iglesia de Nuestra Señora de la Asunción, one of the best examples of Neoclassical, Guipúzcoa architecture.

Beginning our journey on top of the old village, we will find a neoclassic temple designed by the celebrated architect Silvestre Pérez, constructed at the beginning of the 19th century. It has a Greek cross and is built with masonry. Its facade, structured as a Greek pediment with six columns opening up to a grand stair case. Inside, it exhibits various canvases, on which are scribed details of the life of Christ as well as a crucified Christ of Francisco of Zurbarán. The City Hall, in the same Churruca plaza, is one of the most emblematic buildings in town, built in 1731. The prodigal son of the village, Cosme Damián Churruca, also has a statue in the center of this space.

In front of the city hall, you will find the Palacio Galdona, an ancestral home from the 17th century. At its side is the Tourism Office, also built in the 17th century. Continuing through the Conde de Motrico street, we can appreciate the Casa natal de Churruca and the Palacio del Conde de Motrico. Continuing, we can follow the Atxintxin street through San Mikolla to arrive at the Santa Águeda ruins. Halfway through Erdiko Kalea, you can appreciate the Palacio Zabiel, a building from the 16th century that has been restored as a cultural house.

From the Abajo Plaza, you can head under the arc to the Modesto Churruca path, ending in a lookout over the harbour and the beach. Returning to the edge of the harbour you can pass through the Fishermen’s Associations, the Torre de Berriatua, or Sulengua, arguably some of the oldest buildings in town and some of the only survivors of the 1553 fire. Another example of architectural quality is the Antigua Lonja (old market), home of the first association of fishermen and current Social Marine institute, which still maintains its Gothic-Rennaisance style of its origins. Nearby, in the center of Barrenkale, is the Palacio Olazarra-Mizkia, of the 17th century, decorated with beautiful wrought iron balconies and a coat of arms on its facade.

In the Astigarribia neighbourhood is the Iglesia de San Andrés, from the end of the 11th century, one of the oldest buildings in Guipúzcoa. Its inside contains a Visigoth horseshoe window which proves the age of the entire building. 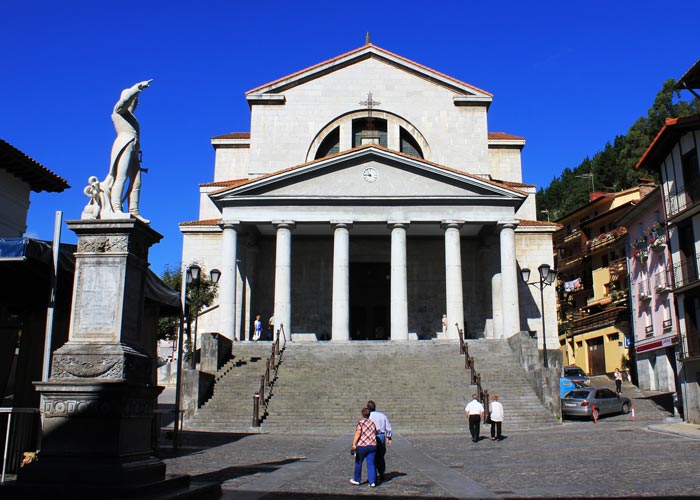 Cultural lovers can also visit two interesting museums related to the sea: Bentalekua, which explains the relationship between the village and the sea, especially through its auction market, and Museo Nautilus, which exhibits paleontological samples collected in the black flysch in Mutriku.

A few kilometres to the west is the magnificent Saturrarán beach, which is well worth a visit or a day off in the sand.

Mutriku also forms part of the Basque Coast Geopark, where you can see the breathtaking flysch, Karst valleys, and other places of interest such as Astigarribia, Olatz, etc. If you want to enjoy the nature and the geologic phenomenon, we recommend checking out La Ruta del Flysch.