The “city of heaven” of Almanzor and the dukes

Located on a high hill, the “Sky City” was the headquarters of the “caudillo” Almanzor and one of the most powerful duchies of Spain, that renewed its architecture in the XVI century. Nowadays Medinaceli continues offering the arts and crafts of the past.

Plan your stay in Medinaceli

The monuments and spaces that must be seen in Medinaceli can be traversed in one day. To the south a great day destination is Sigüenza where it is possible to spend a full day of cultural visits; Next to it is the Parque Natural del Barranco del Río Dulce, which is a pleasant place to see and do trekking. Those who return to Barcelona or Zaragoza via the A-2 motorway may detour and spend an extraordinary day in the natural space of the Monasterio de Piedra. Those who head back to the Plateau should stop for a few hours to visit the interesting Almazán, while still forgetting their sculpture garden and the river walk.

There was a Celtiberian castro near the hill of 1,200 meters of altitude in which the Romans towards the 153 a.de C. install a camp that happened to be the city of Occilis, benefited by the exploitation of the great salinas near. It was located at a junction of the causeways that connected the cities of Toledo and Burgo de Osma with Zaragoza.

In the tenth century it was fortified by Salim ibn Waramai, by order of the caliph Abderramán III, giving it the name of Medina Al – Salim, “City of Salim” or “of the sky”; Making it the capital of the so-called Middle Brand, the border area with Christians north of the Central System. The current urban configuration, with narrow streets, comes from that period. It was years later the base for Almanzor, that from there it realized its devastating aceifas against the Christian kingdoms. It has been written that he was buried there, in some place still unknown, together with his treasure, in August of the year 1002. When the Caliphate of Cordoba was broken down, the lineage of the Banu Salim was established there. This lineage will strengthen the area through watchtowers, making it the only stronghold of the area in Muslim hands. In that period passed the Cid Campeador there, celebrating a unique combat with a Muslim knight, whom he killed. The accuracy of data on Medinaceli in Cantar de Mio Cid leads one to think that the author was originally from the area.

In the year 1104 the Castilian troops commanded by Alvar Fañez finally manage to conquer it, it is lost and reconquered definitively by the king Alfonso I of Aragon, consorte of the queen Urraca of Castile. In 1127, the year after his wife died, Alfonso celebrates the peace of Tamara with his stepson King Alfonso VII of Castile, returning him Medinaceli. This one gave a fuero to its new border place with Aragon, in order to repopulate it with people loyal to him.

By its border position it remained in the hands of the Crown until 1371, when King Henry II created the county of Medinaceli as a reward for one of the French knights who helped him reach the throne: Bernardo de Bearne, bastard son of the Count of Foix. He later married Isabel de la Cerda, great-granddaughter of the infant of Castile Fernando de la Cerda. This last name will be adopted by the counts of Medinaceli instead of the French surname, custom denominated “enhancement of kinship” (to choose the most illustrious surname). 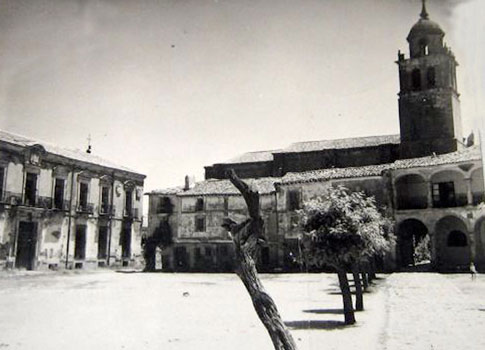 In 1479 the Catholic Monarchs transformed the county into a duchy, a long period in which medieval and Moorish Christian buildings were demolished, replacing Renaissance and baroque buildings over two centuries of economic development. Numerous families hidalgas dependents of the dukes settled down in Medinaceli, constructing houses to which they contribute their coats of arms. During the War of Independence The Empecinado resisted in this place.

Its splendor and mixture of cultures was praised by the Generation of the 98. Gerardo Diego affirmed of her that it was “inviolable to mesnadas and the open angels”. And fascinated by the Cid was on two occasions the writer Ezra Pound who has dedicated a monument.

It was declared of Cultural Interest in the category of Historical Set in 1963. It has been incorporated into the XXI century with its Medinaceli DE ARTE center.

What to see in Medinaceli

The monuments and spaces that must be seen in Medinaceli can be traversed in one day. To the south a great day destination is Sigüenza where it is possible to spend a full day of cultural visits; Next to it is the Parque Natural del Barranco del Río Dulce, which is a pleasant place to see and do trekking. Those who return to Barcelona or Zaragoza via the A-2 motorway may detour and spend an extraordinary day in the natural space of the Monasterio de Piedra. Those who head back to the Plateau should stop for a few hours to visit the interesting Almazán, while still forgetting their sculpture garden and the river walk.

To begin the visit to Medinaceli we start from its famous Arc de Triomf, unique in its class in Spain due to its triple arcade with two small spans flanking the main one; Its little decoration is very worn by the inclemencies of the time. Also of Roman epoch is the Source of the Channel, several mosaics distributed by the locality, the snowmobile and the rest of the Roman way XXIV of the itinerary of Antonino, between Merida and Saragossa.

For a walk of centuries-old acacias you enter the village until the Monastery of Santa Isabel, inhabited by nuns Clarisas who continue today dedicated to pray for all of us and to support themselves by the elaboration of sweets and nougats. The Flemish Hispanic facade of the monument conserves windows of conopial and escarzanos arches.

At the end of the village you must see in Medinaceli the ruins of the Castle of Villavieja, built by the Christians in the 13th and 14th centuries on top of Muslim and Roman remains; Keeping the Muslim stables. It has square plant, three circular turrets in its corners, being rectangular its tower of the homage.

The Plaza Mayor is located in the old Roman forum. It is the classic square with arcades, Castilian style, where on November 12 is celebrated the traditional feast of the night of “Toro de Júbilo” (with fire in the pythons). In one of the arcades is the ancient Alhóndiga of the seventeenth century. Presiding over the square is the Palace of the Dukes of Medinaceli, a Renaissance building from the 16th and 17th centuries. This one has a central patio with arches of half point on pillars and an upper gallery with lowered arches. Here is located the Archaeological Hall with reconstructions, figures and audiovisual resources. Also on the ground floor is the Medinaceli Contemporary Art Center DEARTE, headquarters of the DEARTE Foundation. The rehabilitation of the Palace has included a glass dome adorned by 151 drawings of the Basque artist Agustín Ibarrola. An artistic atmosphere that can also be noticed in the art galleries and shops with artisan objects that are there for that area. 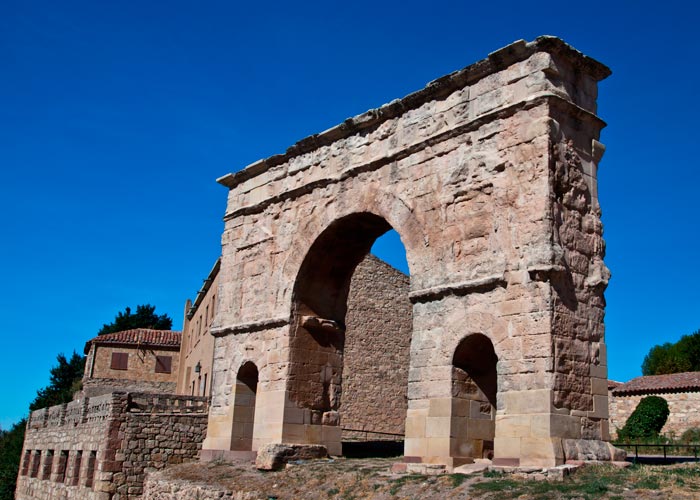 Behind the square, strolling through houses decorated with coats of arms and protected by trellises, one arrives at the voluminous Collegiate Church of Santa Maria de la Asunción, Late Gothic Temple of 1561; Has a large single nave and a pentagonal Greater Chapel that is the pantheon of the dukes. Below the baroque altar there is a crypt, also worth mentioning its Gothic rejeria, a Gothic carving of the Virgin, a Christ of the XVI century, sepulchral tombstones and diverse paintings.

In what was the Jewish quarter are the ruins of the Beaterío de San Román. It lacks presbytery and apse and is thought to have been the building of the ancient synagogue. In it are preserved the relics of the patron saint of the people, the martyrs Arcadio, Probo, Pascasio, Eutiquiano and Paulino (died in Africa in the fifth century) whose remains arrived at Medinaceli by miraculous route.
If time is available it is worth traveling the thirteen kilometers to see the Paleontological Museum of the town of Ambrona. Set on a site of the Lower Paleolithic, it gathers incomplete fossil skeletons of mammoths and remains of other animals.