Light pollution is something that most people, especially those in big cities, live with. However, it is hard to realize its impact until you are in front of a clear sky. How it affects nature, especially birds and insects, is a hot topic in scientific research. Although in cities like Barcelona, Madrid, Seville or Santander it is impossible to contemplate constellations or the Milky Way, there are places where this spectacle is possible. In Extremadura there are several celestial viewpoints, part of a project of the regional government, where you can once again marvel at the space. 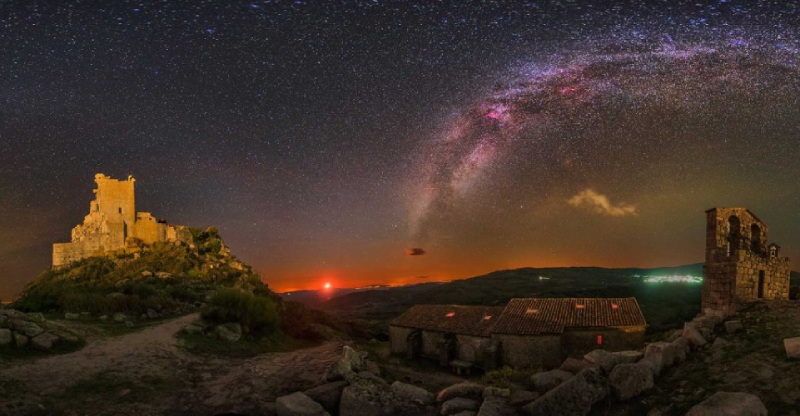 Castle of Trevejo in the Sierra de Gata, future location of a viewpoint. | Extremadura, Buenas Noches

The Night Sky in Extremadura

Several factors make Extremadura an exceptional place for tourism away from the crowds. Despite having such well-known landmarks as Trujillo and its medieval atmosphere, Mérida with its Roman remains or Cáceres and its enviable historical centre, there are plenty of alternatives for those who want something more isolated. Thus, the Visigothic basilica of Santa Lucía del Trampal offers an experience as intimate as the ancient Roman city of Cáparra. It is precisely in this place where one of the celestial viewpoints of the Extremadura, Buenas Noches initiative, is located.

This project is developed by the Junta de Extremadura and is part of two other international projects. On the one hand, the Destinos Starlight astronomical tourism project and, on the other hand, the STARS4ALL European light pollution awareness project. In this way, a celestial map has been displayed in each of the chosen locations. In the shape of a large, round, white artificial stone, it automatically lights up at night for a couple of hours. So do the beacons that lead to the stone chart. 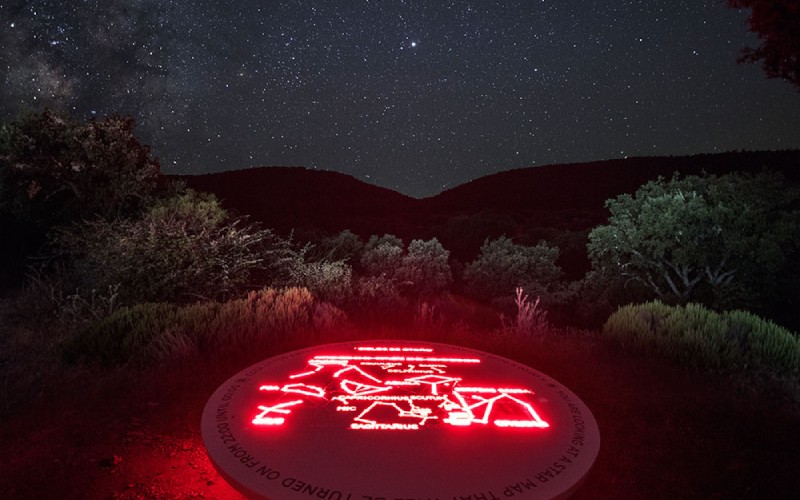 There you can observe star formations simply with a pair of binoculars. From historical sites to natural parks, there are many alternatives to choose from. Nevertheless, it is worth paying attention to the time of year when you can see what is described in the star map. Thanks to this, they are top destinations divided between spring, summer, autumn and winter. A great complement to events like the Perseids. These are the places that host the viewpoints at present, which in the future will expand for example in Trevejo.

A distinctive symbol of the Extremadura, Buenas Noches project. | The entity itself 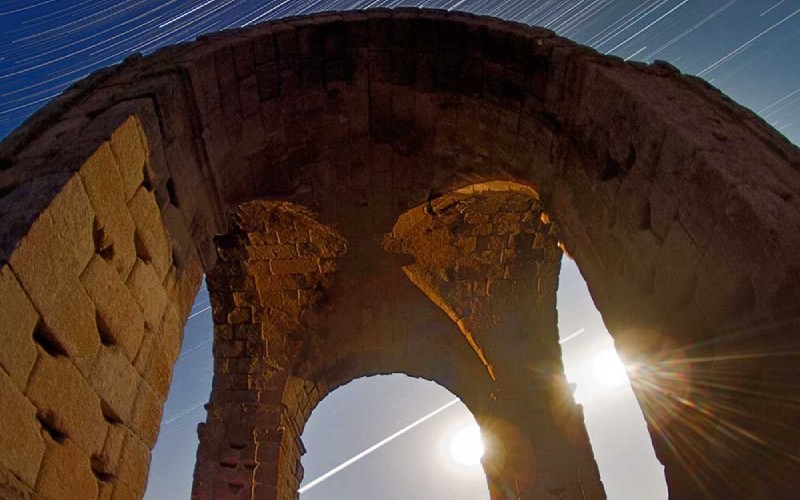 Long exhibition of the Arch of Cáparra. | Extremadura, Buenas Noches

As already mentioned, this spot links up with the Silver Way, an old Roman road that is now on the Way to Santiago. An enclave located between pastures, in the province of Cáceres. Literally in the middle of nowhere, this viewpoint is mainly for the spring and summer seasons. Surrounded by Roman ruins, the most outstanding is the four-sided Cáparra arch, unique in Spain. 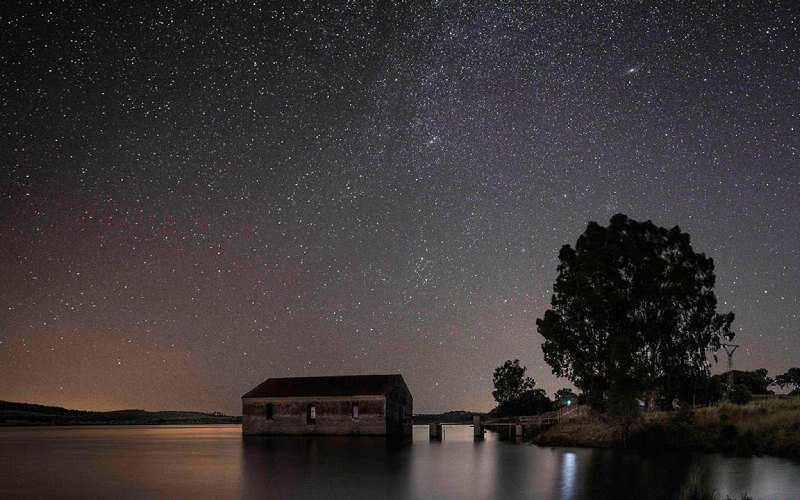 The border town par excellence of Extremadura does not have its viewpoint in its urban area. You have to go from Olivenza to the village of Villarreal and from there along a beautiful path to the banks of the Guadiana. With the Ajuda bridge to the north and facing Portugal, a spectacular sky unfolds. In this case the river course helps to create light games with the truly impressive stars. The ideal time to go is spring-summer. 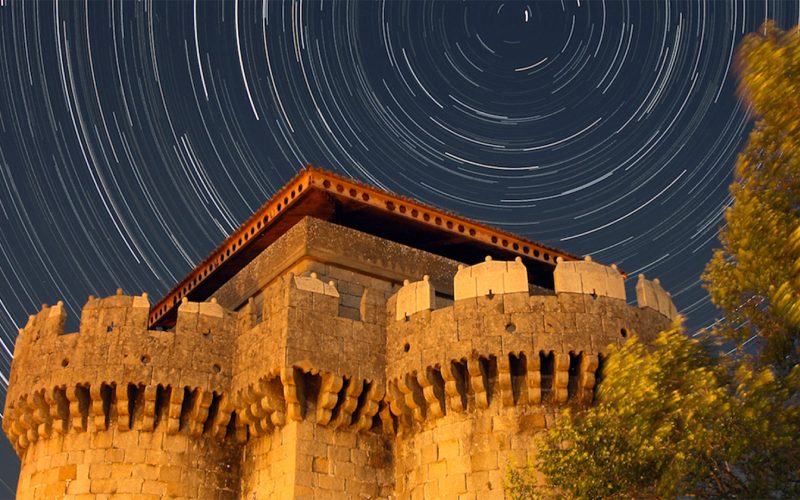 Granadilla’s ghostly appearance helps you to spend some unique hours looking at the night sky. This town was taken over by the state in order to build the Gabriel y Galán reservoir. However, unlike other towns condemned to sink, the water never covered it. A government project has been rehabilitating the place for decades, giving back the aspect of other times to its main street, church or castle. Summer and autumn are the best times to visit it as a night observatory. 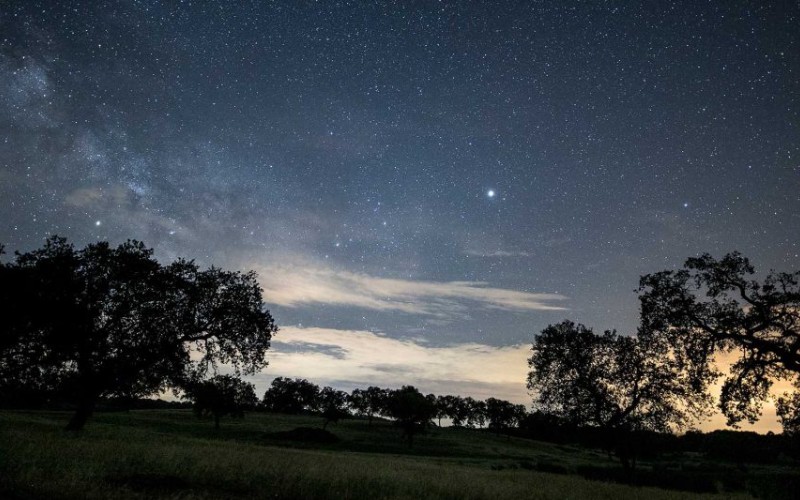 Near a small town in La Paz, not far from Badajoz or Alburquerque, is the next viewpoint. As in the case of Olivenza, you must leave the town to reach the observation area. It is a comfortable walk of about three kilometers. Given that its most likely periods are spring and summer, a great option is to take the car and take advantage of it to make another visit at night. The Dolmen de Lácara is barely 25 minutes away. This way, a really complete trip is made. 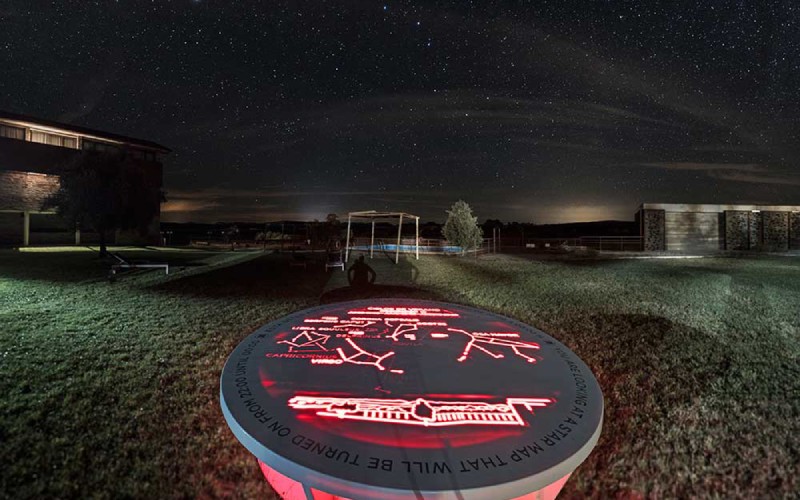 Besides being a natural park with infinite possibilities and home to an outstanding fauna, including vultures and imperial eagles, Monfragüe is a highlight of Extremadura, Buenas Noches. The location of the viewpoint is the Hospedería de Monfragüe, in Torrejón el Rubio and its perfect season is summer and autumn. This way you can combine a visit full of active tourism and nature with breathtaking views of the Milky Way. 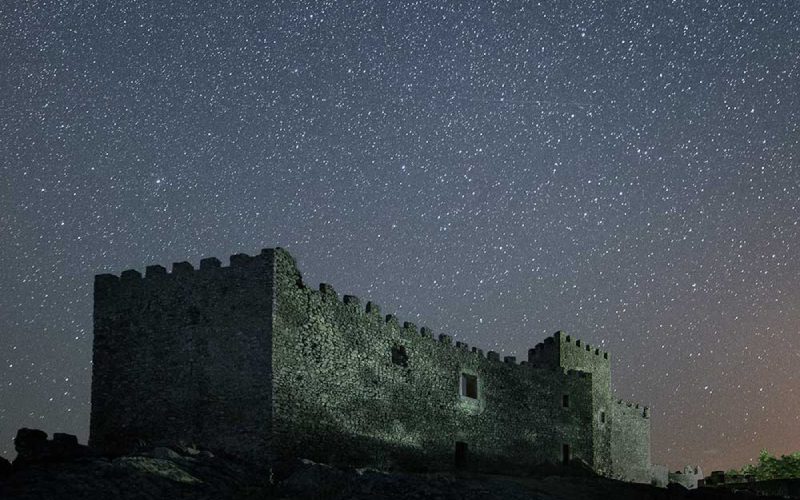 With a cemetery considered one of the most beautiful and a powerful medieval castle, Montánchez is a well-known town in the centre of Extremadura. It is precisely in its fortress where you can find the celestial viewpoint, suitable in summer and autumn. A rich cultural atmosphere that is amazing at night. It also has the added bonus of being a relatively urban space, making it one of the most accessible of the entire list. 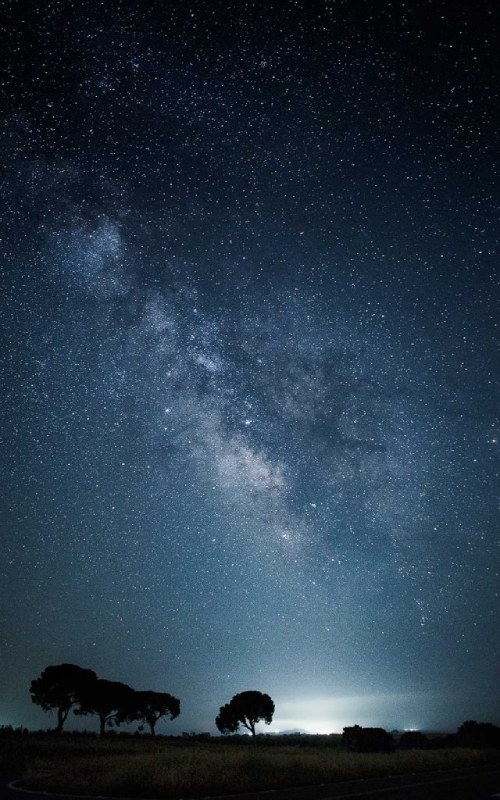 Perfectly connected to the centre of Spain through the A-5, Badajoz is next to one of the sky viewpoints of Extremadura. It is the one associated to the centre of La Cocosa. The name may be familiar due to the famous Roman villa that is located just three kilometers away. In this way, you can visit it in the afternoon and have something to eat in order to make time to contemplate the sky. Together with the modern construction, it is the ideal observation point for winter and spring. 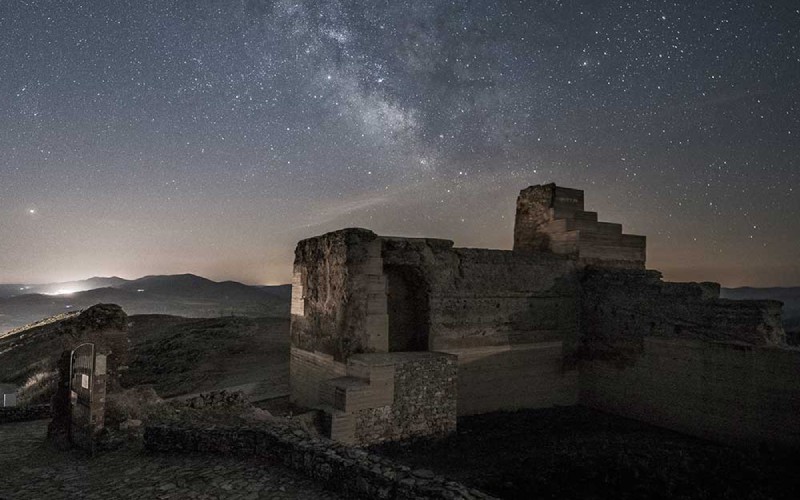 This territory, which borders with the Sierra de Hornachuelos and Huelva, features the following viewpoint. It is in the Alcazaba de la Reina, next to the town that gives it its nickname and next to a hermitage. A landscape of great amplitude that gives continuation to the bordering mountains of Huelva. As in Montánchez, the remains of a fortress come with it. Likewise, not far away there is another night route of the project, the one that goes through Fuentes de León, a passage of the Way to Santiago that comes from the south. The best seasons to go are spring and summer. 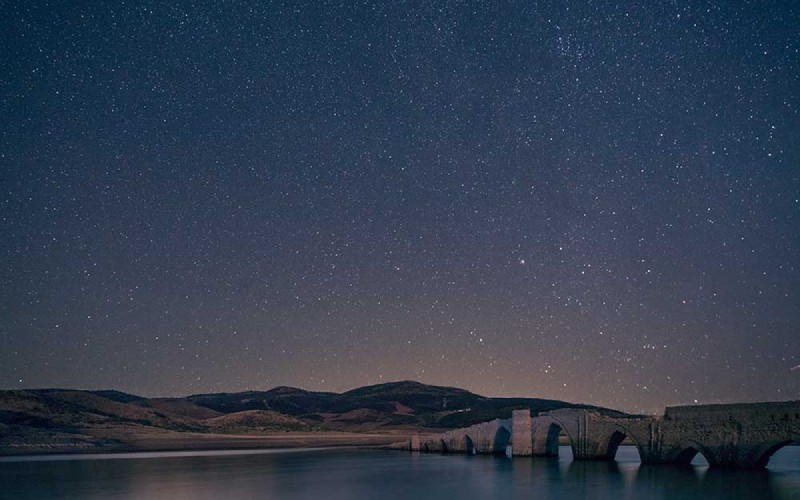 The crossroads that the Siberia from Extremadura represents is clear when you see the region on the map. In the northeast corner of Badajoz, it is located between Cáceres, Toledo and Ciudad Real. Its curious name comes from the distance from the provincial capital and it arose in the 19th century. Puebla de Alcocer is one of its main towns. It is a very isolated place, a perfect corner to get lost for a weekend, which has a celestial viewpoint in one of its towns: Helechosa de las Montes. Besides looking up to marvel, especially in summer and autumn, there is a night route around the town that runs through its surroundings. 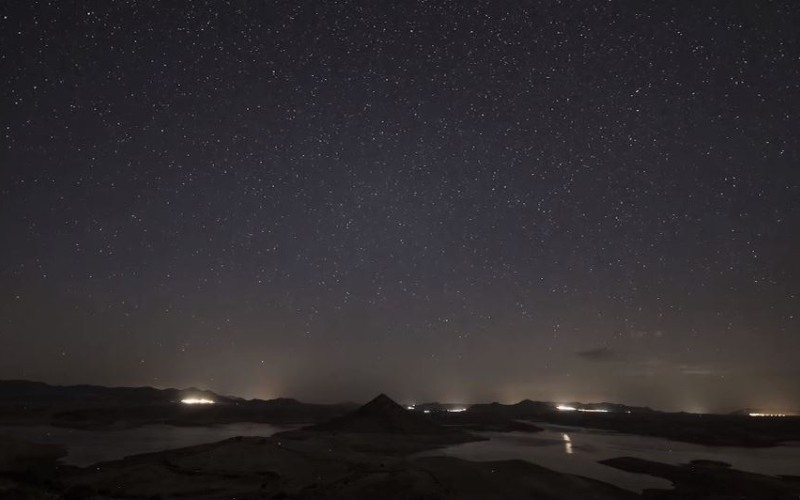 This village of Esparragosa de Lares, close to the La Serena reservoir and the province of Ciudad Real, not only has a viewpoint overlooking the sky that is especially recommended for spring and summer. It is also the centre of one of the three night routes that are part of Extremadura, Buenas Noches. Another very interesting place is the hill of Masa-Trigo. This is a small mountain surrounded by water and connected to the ground by road. It is worth mentioning that it is part of the south of Extremadura Siberia. 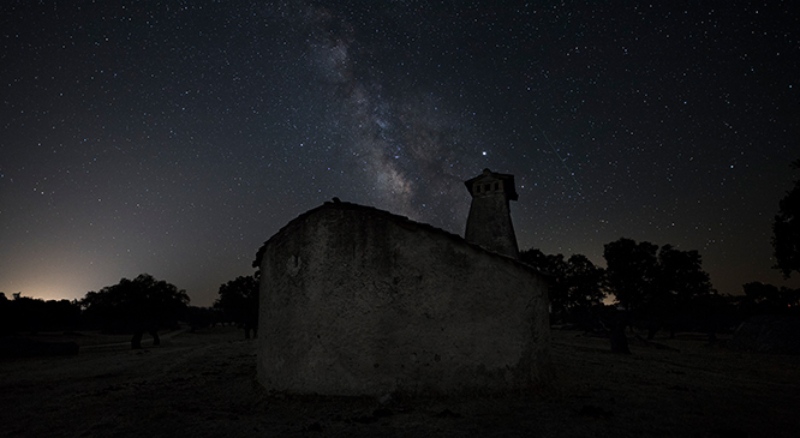 An environment with an isolated hermitage, sales, ruins and typical vegetation accompanies this observation point. It is the Dehesa and Arroyo de la Luz. A space that has been made a museum by the municipal administration. Thanks to this we can understand the impact that this type of Mediterranean forest has on the territory of Extremadura. The best seasons to go and see the night sky are autumn and summer.

El Palancar Convent, the smallest monastery in the world
Franciscans emerged in the Middle Ages as defenders of the poor. While Rome and Compostela Más información