Many civilizations have passed through the Iberian Peninsula since ancient times. However, few have left a legacy as extensive as Rome. From spectacular civil works to impressive military buildings, these ancient Roman monuments stand defiantly at the same time. Join us on a tour through Hispania. These are the 8 best Roman sites in Spain.

Perhaps Augusta Emerita is the largest example of Roman monuments in Spain. The starting point of the Silver Way was the capital of the Province of Lusitania. Among the innumerable Roman ruins that populate its streets are three that stand out from the rest. The Roman Theatre of Merida has the honour of continuing to serve as a venue for performances two millennia after its construction. 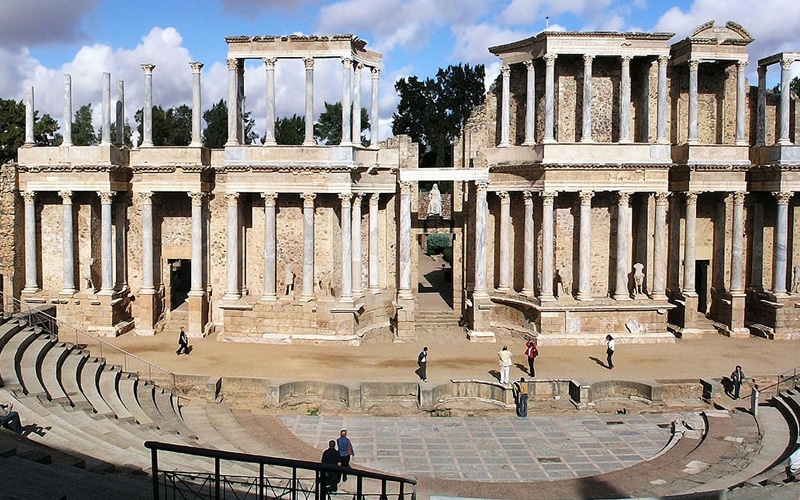 The nearby amphitheatre allows people to step into the arena where gladiators fought in front of fifteen thousand people. More blurred is the Roman Circus of Mérida. Yet it is still impressive. With four hundred meters long it is immense, admitting at its time of splendor a capacity of thirty thousand souls.  Thus, Mérida is synonymous with Roman ruins in Spain.

The Roman Villa of Noheda, in the province of Cuenca, is a real gem. It is a luxurious complex from the 4th century. Its sumptuousness confirms that it belonged to a member of the imperial establishment. The work carried out since 2005 to restore it was recently completed. Thus, at last, one can contemplate its masterpiece: possibly the best Roman figurative mosaic found to date. A highlight among Roman monuments in Spain, it is huge and very detailed. In fact, it covers almost all of the 290 square meters of the triclinium or main dining room. 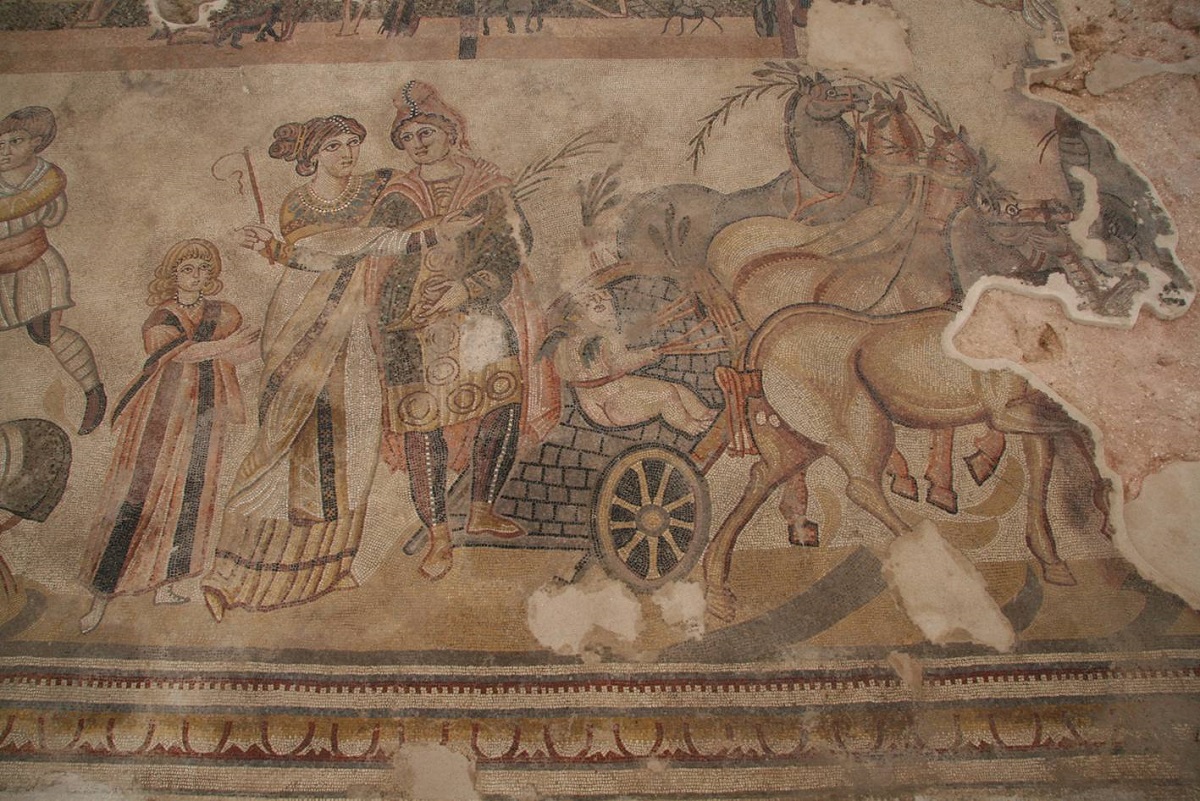 Details of the mosaic of the Roman Villa of Noheda. | Cultura Castilla-La Mancha

Lugo’s defensive structure stands out from others, such as Astorga‘s, because it remains almost intact. The Roman Walls of Lugo surround the old centre of the city completely. Its construction dates back to the end of the 3rd century. At that time, the barbarian pressure forced this type of buildings. Besides, it seems that the whole enclosure emerged as a unique project. Hence the uniformity of the complex. Without a doubt, it is one of the best preserved Roman monuments in Spain. 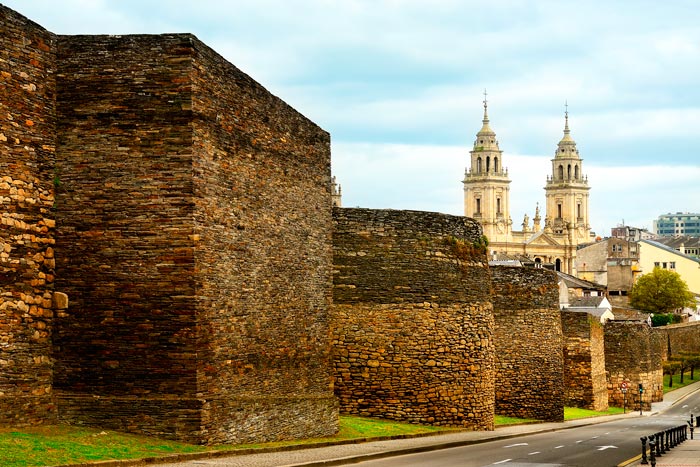 Walls of Lugo, one of the great Roman monuments in Spain

Created in the 3rd century B.C., it is the first city that the Romans founded outside Italy. This happened in the context of the 2nd Punic War. At that time, the most important family for the introduction of Roman Republic in Spanish territory, Scipiones, led the fight in the area against Punics. The early development of the place was due to this patrician family. It is not clear if what today is Tarragona was an Iberian city or a Carthaginian camp. 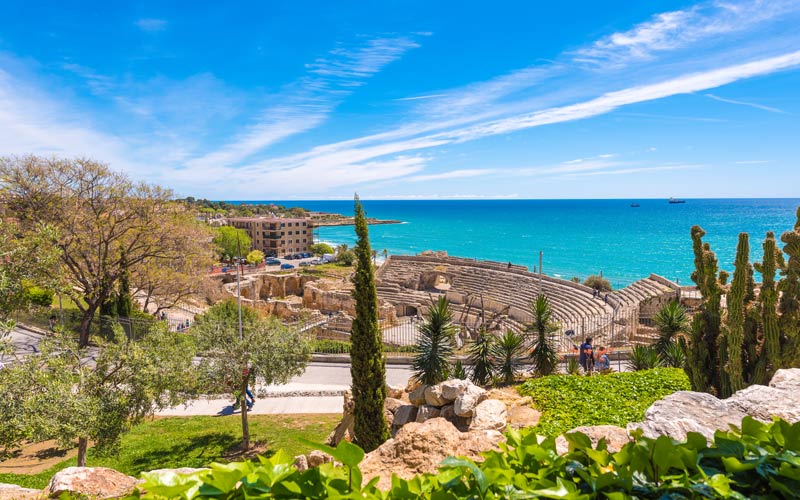 After the death of the brothers Publius and Cnaeus Cornelius Scipio, the son of one of them returned to Hispania. Publius Cornelius Scipio managed to turn the conflict around with the forces left by Hannibal. In this way, Tarraco was one of his main bases. Later it was raised as capital of the province Tarraconensis. Thanks to this, it had a circus, an immense forum, an amphitheatre, aqueducts… Its importance continued being remarkable until the Arab conquest.

Roman City and Arch of Cáparra

In Cáceres, located in the middle of the Silver Way, the site of Cáparra extends. The city was an important commercial centre in its time as it was located on such a communicative route. Its remote past goes back to the first century before Christ. However, prosperity vanished with the fall of the Roman Empire until it disappeared after the Muslim invasion. Its great landmark is the Arch of Cáparra, symbol of the Roman road where it is located. It is the only tetrapylum, or arch with a square floor plan, on Spanish territory. Every day pilgrims on the Way to Santiago pass under it, thus enjoying one of the great Roman monuments in Spain. 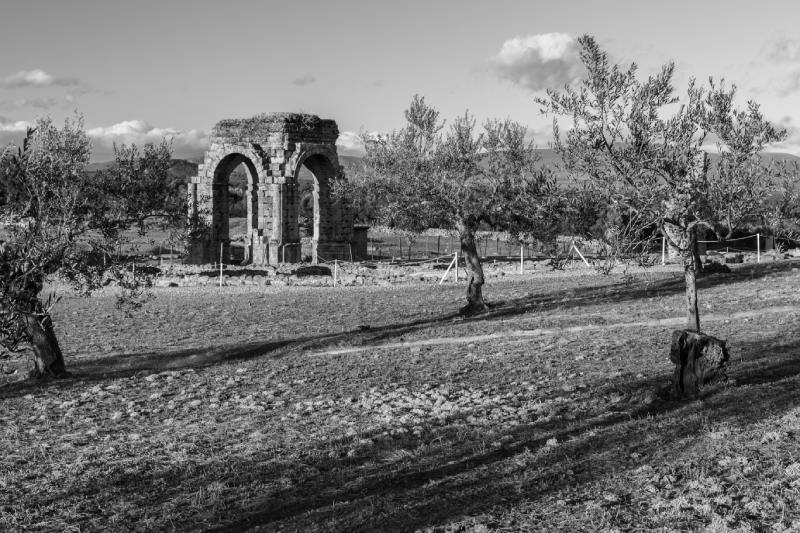 Cáparra, one of the best Roman ruins in Spain. | Depositphotos

Ruins of Itálica, in Santiponce

A few kilometers from Seville is one of the most important Roman ruins in Spain. This is Itálica, the second city that founded the Roman Republic outside Italy. The first was Tarraco (218 BC), also impressive. Like it, it owes its existence to the Scipiones of the Gens Cornelia. In this case, the most famous of these: Publius Cornelius Scipio, later nicknamed The African for defeating Hannibal. Built to house veterans next to a Turdetan village in 206 BC, it was absorbed after a short coexistence. A demonstration that Spain has been a golden retreat for millennia. 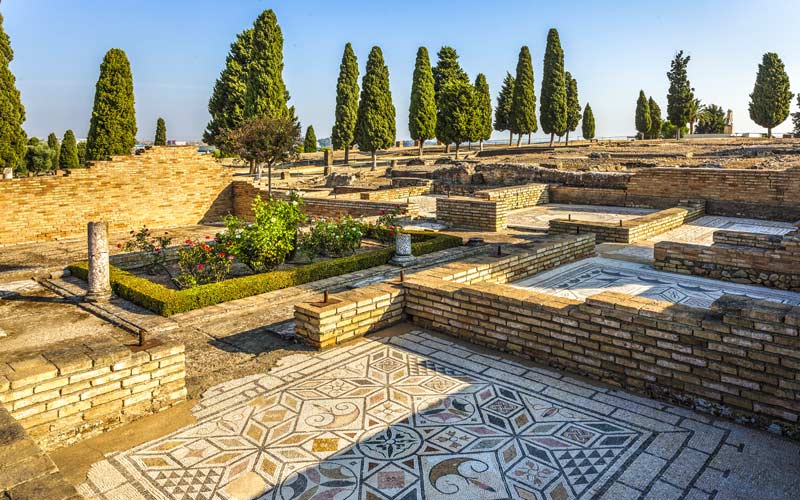 From taking in soldiers in the Republican era, it went on to provide emperors in the Imperial era. Trajan was born there and it is possible that Hadrian was born there too. In any case, both belonged to families that had been settled in this prosperous city for centuries. Thanks to them, especially the second, Itálica knew glory. Despite reducing its size, it remained prestigious until the Visigothic era. However, in the 12th century it became depopulated. Later, Santiponce was built on part of it.

Italica, one of the great Roman ruins in Spain

The ancient Greek colony of Emporion was key to Rome’s entry into Hispania. During the Second Punic War it was a base for the Scipios. This affiliation would be confirmed after the Latin victory. Where today’s Roman urban remains are located, there was first a military camp. The rise of Emporiae was interrupted when it sided with Pompey in the war against Julius Caesar. After that, Tarraco absorbed local power. Among the Roman ruins in Spain these stand out because even today one can see the harmony that existed between the Latin and Greek enclaves. A privileged combination. 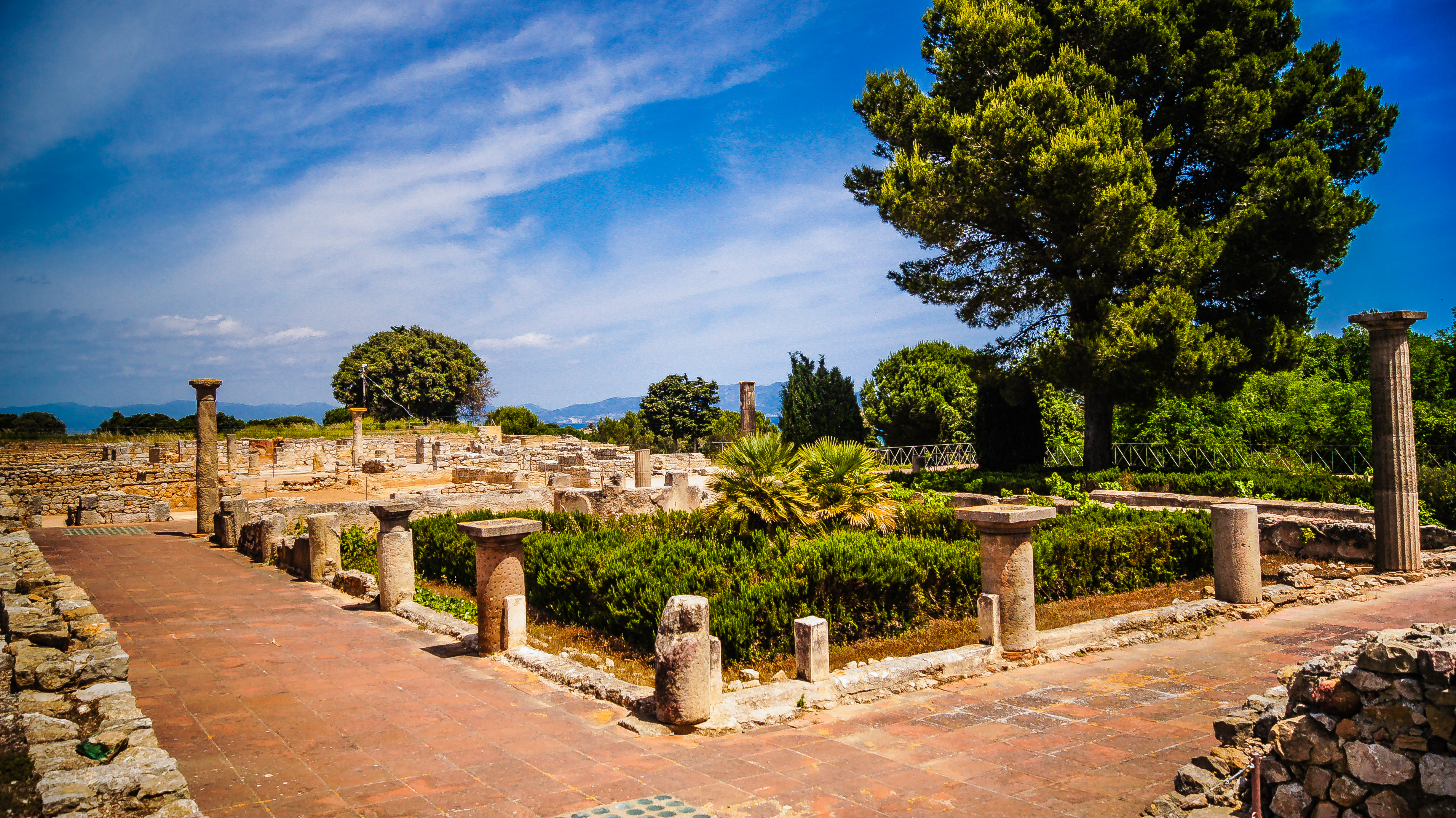 Theatre of Cartago Nova, in Cartagena

Another city closely associated with the lineage that introduced Rome to Hispania hosts one of the best Roman ruins in Spain. It is Cartago Nova, conquered by Scipio the African, and its Roman theatre. General’s ingenuity allowed the city to lose its impregnable halo. It was an important settlement both in the Republic and in the Empire. Its theatre dates from between 5 and 1 B.C. With capacity for seven thousand spectators, today it leaves great panoramic views of Cartagena. 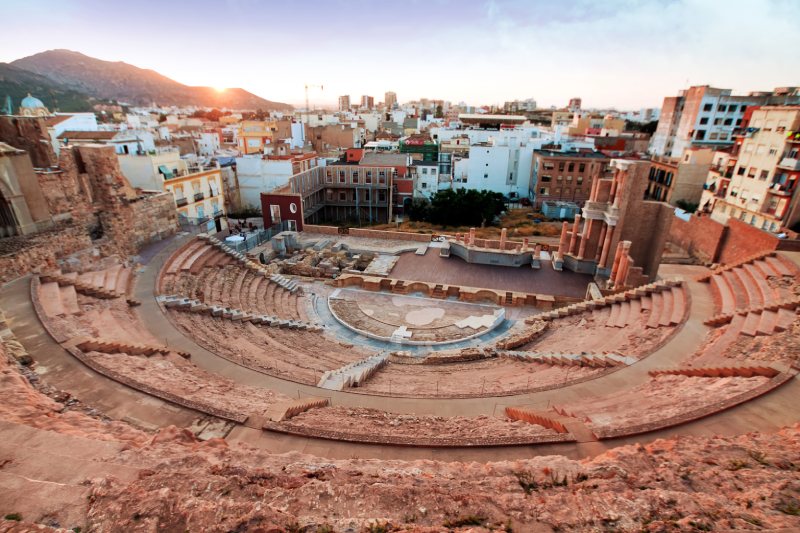 Besides being one of the best known Roman monuments in Spain, the Aqueduct of Segovia is the great symbol of the Castilian city. Erected in the first third of the 1st century, its section of arches overlooking the Plaza del Azoguejo is also its best known part. However, as is often the case with Roman engineering, there is much more. The work collected the waters of Fuenfría. From the spring there were about 15 kilometres of channels. Its three parts included the collection, the canalization to the village and its distribution through it. A device that supplied the place with water until the previous century. 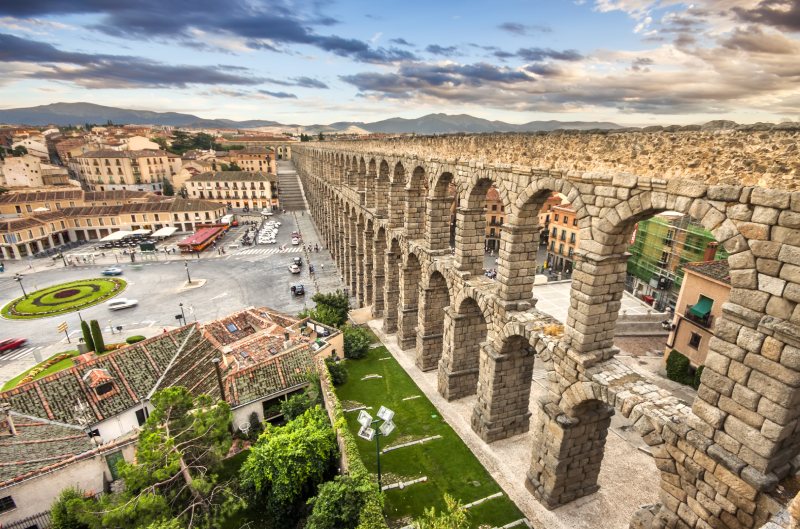