The islands of the prime meridian

Sorrounded by a spectacular underwater garden, this Canary Island also possesses a beautiful surface. In it you can explore very important heritage both natural and etnographic. During various centuries, the remote Atlantic place was reference, due to the prime meridian being situated here. Up next, lets discover the history and the travel guide of what to see in El Hierro.

Plan your stay in El Hierro

You can access the small island through the North Tenerife Airport. It is also possible to arrive through the Port of La Estaca. Here, Ferries arrive from Tenerife, The Christian Port, and San Sebastian of La Gomera. What to see in El Hierro is influenced by it being part of the Biosphere Reserve. It is an authentic paradise for nature lovers. The volcanic land and the exuberant forests, which allow for hinking and views in the flora and fauna.

Therefore, it is recommended to visit the Frontera Rural Park and the Natural Monument of the Beaches. As well as the volcano, and marine ports, which make snorkeling a great practice with the clear waters.

The travel guide to this beautiful place requires a minimum of three days to explore.

The history of the island must be known before discovering the travel guide to El Hierro. This place was already famous in the II century. By then, the Greek geographer and astronomer Claudio Ptolomeo traced a map of the known world. In it, the Canary Islands were located to an extreme, suposing that farther away there was a precipice that guided the ships- El Hierro being the most occidental in the Archipelago, in it the prime meridian was situated.

On another hand, until the XV century El Hierro was governed by the Bimbaches. Such town with an ethnicity close to the Berebes, lived i caves as an own Neolitical civlization. They called their island Eseró o Heró. Before 1405, Bethencourt and his mates went on an expedition and captured the indigeous Augeron, bother of the King of the island. He learned French in the Rubicon base, close to the actual Yaiza in the island of Lanzarote.

In that same year Bethencourt returned accompanied by Augeron. The hostage achieved to convince his countrymen to not resist to the occupation. The main condition was for them to respect a series of rights. However, the conqueror imprisoned many of them and sold them as slaves in the Península. El Hierro was repopulated by the French and the Castillians.

The insula was converted into a jurisdictional lordship of the Counts of La Gomera, a marriage composed by Hernán Peraza and Inés de las Casas. She was the daughter of Guillén de las Casas, which had bought Count de Niebla the rights over the islands. Since then, the management was under a Count administrator and a cabildo named by the Count. In September 16, 1493, Christopher Colombus fleet arrived at the island to pick up water and wait for auspicious winds to cross towards America. Such practice would be repeated by the multitude of travellers in the upcoming years.

Half a century later, a ship on its way to America would contribute one of the great elements to see in El Hierro and in this travel guide. Due to the persistance of the winds, the ship exhausted its supplies.  After that, on January 6, 1546 they were able to get close to the coast of El Hierro. Once there, some Pastors hprovided them with supplies, food, and told them where they could find water. In gratefulness, their captain gifted them with the most valuable thing in their ship, an image of the Virgin Mary.

From that moment a favorable breeze began to blow that would help them continue on their journey, The pastors named the image “The Virgin of the Kings”. They placed the figure in the Snail Cave and posteriorly edificated a chapel and a santuary. Every 25th of April, they have a celebration of the pastors.

In 1533, the first ayuntamiento of the Island of Valverde was formed. While that Francis Drake attacked El Hierro without success. Between 1702 and 1704, they perforated some rocks in the Sabinosa Coast to extract soluble water. The end of such workwas to be able to give water to the livestock. However, they realized that it was medicinal water and bagan to pack it and export it. At the same time, they constructed a spa to treat the travelers that would visit to drink it and get hot baths.

A new attack was carried out in 1762, when the englishmen George Cumberland and Berkeley disembarked in the Port of Naos and raided the island. Another landmark in the island dates to 1884. During that time an International Conference in Washington as celebrated to establish a unique meridian for the whole world.  Historically, the employee had been the one to pass through the El Hierro Island. Not obstantly, since than the prime meridian would be one to pass through the Greenwich observatory, on the outskirts of London.

Up till the XIX century, the counts rules the Island. In 1899 the Ayuntamiento building was burned, a long with all it´s documents. Because of that, it is not possible to have a better understanding of the past of the island.

Up next, discover the best places to see in this travel guide to El Hierro.

What to see in El Hierro

The travel guide of what to do in El Hierro normally involves aquatic activities or nature in general. You must visit the Frontera Rural Park and Playas Natural Monument. Our tour starts in Valverde’s old town, presided over by Nuestra Señora de la Concepción Church, whose altarpiece and the religious images inside are quite interesting. Near, the Consistorial Houses, Conde House, and Quinteras House are worth a visit as well. A small Archeological Museum can also be visited.

Near Valverde, we can find the Monacal and its natural pools. Also, here lies the Jinama Viewpoint. Another place to contemplate the view in our travel guide which is Peña Viewpoint, 700-meters in height, which is next to Virgen de la Peña Chapel. Do not leave Valverde without having a look at the Bajada Tribute. In Valverde, there is also an Interpretation Center devoted to the tree of the island, the Garoé. It is here where we find another famous lookout: Hoya de la Fireba Viewpoint.

Lets continue on this travel guide.

La Frontera is another interesting village in the island, standing out because of Nuestra Señora de la Candelaria church and Nuestra Señora de los Reyes Sanctuary (patron saint of El Hierro). If you plan to visit the Golfo Valley, then you must visit the Ecomuseo Guinea Cultural Park (dealing with the evolution of the area throughout history) and The Recovery of the Giant Lizard of El Hierro Center. From the Bascos Viewpoint you can observe the Tanganasoga Volcano. Another outstanding sight is the Kings’ Cross (1400-meter height). 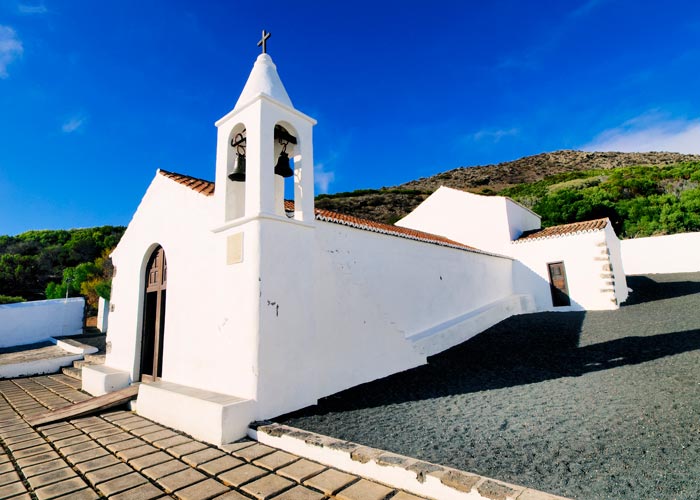 Another visit in this travel guide is the Caracol Cave. El Pinar is a village that houses the Playas Natural Monument, El Julán and Tanajara. The most important sight is the Restingolitas Museum, where pieces that emerged from the submarine volcano are being held. There are also interesting aboriginal engravings.

Another must-see in El Hierro is the Zero Meridian Monument, which is next to the Orchilla Lighthouse. Do not miss the Faro Cave. Also, in El Pinar, one cannot leave without paying a visit to Mar de las Calmas Marine Reserve. Beaches in El Hierro are the most amazing to see: El Verodal, Charco Azul, Arenas Blancas, Puerto de la Estaca, Charco Manso and Las Playas

With this, we conclude our travel guide of places to see in El Hierro.

Barranco de las Vacas, the Spanish version of the Antelope Canyon
The geological peculiarities of the Canary Islands unveil a land of great mysteries that never Más información

Los Colores Waterfall, the most colourful combination of nature and mankind on La Palma
La Caldera de Taburiente, on the Canary Island of La Palma, has become famous for Más información