Rivers usually leave great postcards along their course, among which the waterfalls stand out. The abundance of rivers and the rugged terrain create many of these landmarks throughout the Spanish geography. Going from the existence of complex waterfalls divided in several phases to the classic pictures of falls with tens of metres high. A perfect addition to the forests and valleys that creates the river’s network. Here you have the Spain’s most fascinating waterfalls.

It is always better to start strong, so the first of the Spain’s most spectacular waterfalls is the Salto del Nervión. This waterfall has the honour of being the highest in the country, at over 220 metres high. The abundant flow of the river that gives it its name makes it grow or shrink depending on the time of year, even drying up in summer. Thus, it is best to visit it when its watercourse is loaded. Worth noting is that it is associated with Mount Santiago, a Natural Monument that also offers huge panoramic views of the Orduña Valley. Likewise, the place is in the middle of the border between Burgos and Álava. 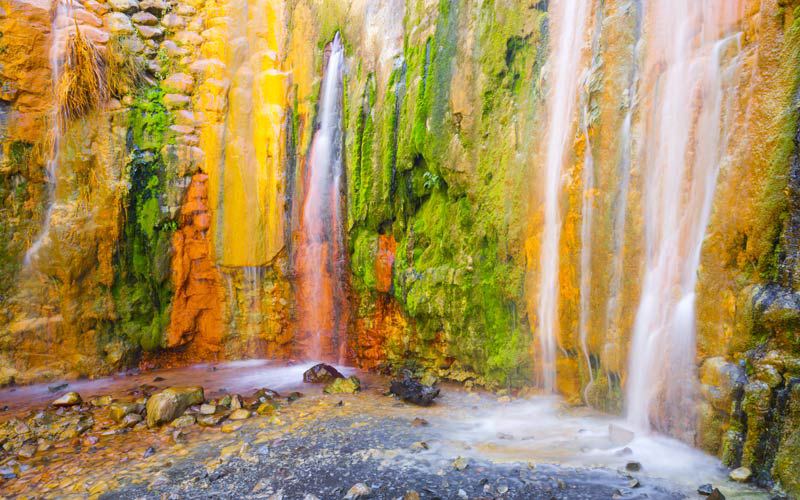 Canary Islands probably have the most peculiar waterfall of the most fascinating ones in Spain. This is the so-called Los Colores waterfall, in La Palma. The color of the stone that forms it is quite psychedelic, going from yellow and red to green tones. These first two are generated by the iron of the water, while the third one is the result of moss. The water falls from a cut artificially made during the 60’s. It was intended to facilitate the collection of water from the Caldera de Taburiente, the Natural Park to which this landmark belongs. 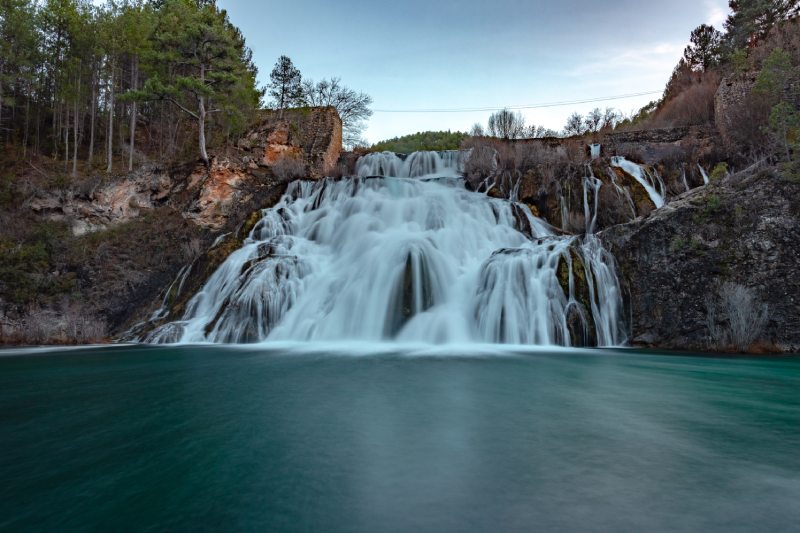 Salto de Poveda in Guadalajara, one of the most spectacular waterfalls in Spain. | Depositphotos

Again, it is time to go to an artificial but beautiful place. Salto de la Poveda is one of the great elements of the Upper Tagus in Guadalajara. It is created by an old broken dam, whose mission was to supply the Chorrera reservoir with the the Tagus, but today only remains the Taravilla lagoon. A viewpoint and a hiking route allow you to spend a day touring this beautiful natural environment of Guadalajara. 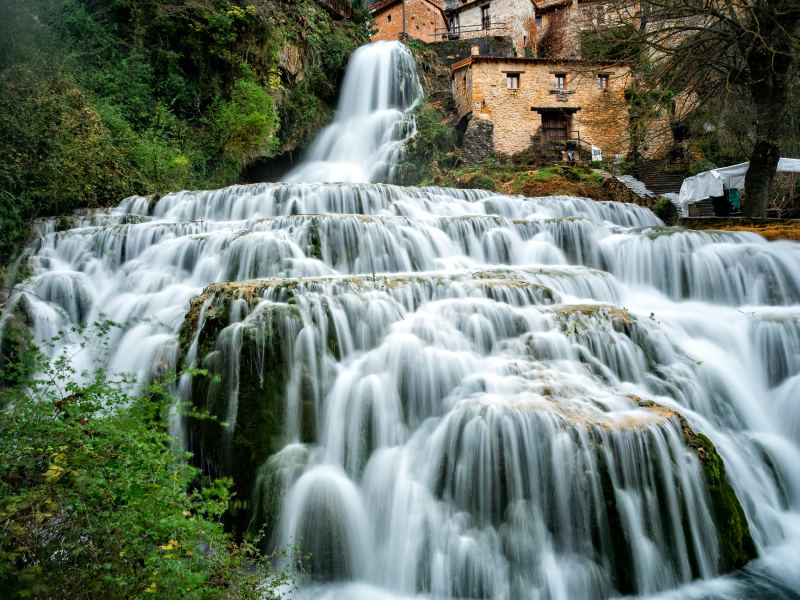 Located in Orbaneja del Castillo itself, this waterfall divides Burgos into two halves. The waterfall is about 25 metres long and is supplied by the Ebro. In addition to its location, which is extraordinary in itself as it is in the middle of a town, it stands out because the water comes out of a spring. Going up the groundwater course you can reach the other treasure of the place, the Cueva del Agua. Lakes and passageways intermingle in this site pierced in the bowels of the earth. In the opposite direction, the most abundant course in Spain creates the Natural Park of Alto Ebro and Rudrón gorges. 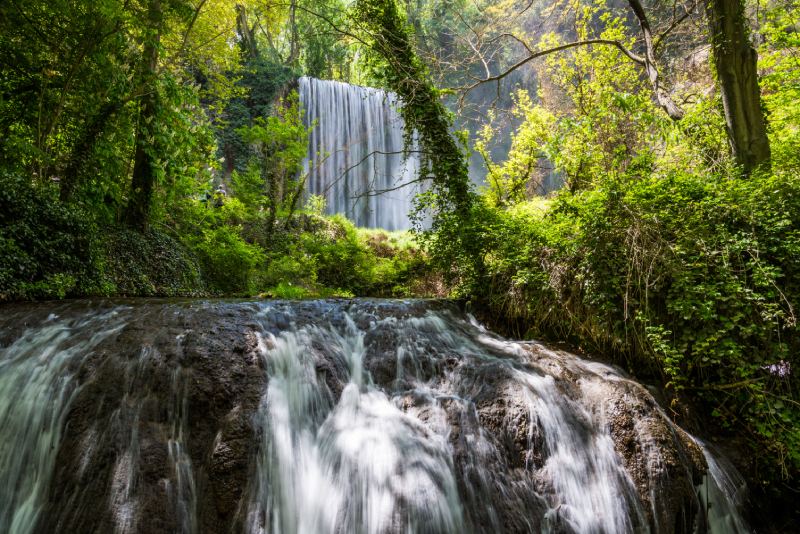 Natural and human actions have created a fantastic environment in the Monasterio de Piedra and its gardens. The abundance generated by the Piedra river is added to this historical enclosure. On its way down, it generates a myriad of waterfalls of very different shapes. From the vertical Cola del Caballo, not to be confused with the one in Ordesa, to the one in La Trinidad, this spot has several of the most fascinating waterfalls in Spain. Without a doubt, it is one of the most beautiful places in the province of Zaragoza.

Waterfall at the source of the Mundo River.

With a name like this, it was impossible for this river course not to have one of the most spectacular waterfalls in Spain. Located at its incredible source, in the Calares del Mundo y de la Sima Natural Park, it is one of the largest in the country at over 100 metres. Around it, an abundant green vegetation grows, which defies the classic image that one has of the province of Albacete. To see it, the best place is Riópar. 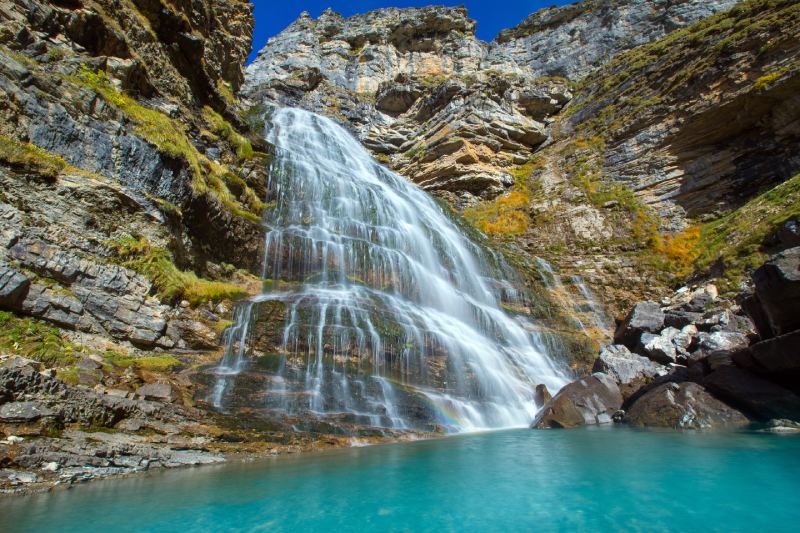 Besides having some of the best beech forests, valleys and routes that can be seen in Spain, the Ordesa and Monte Perdido National Park has some stunning waterfalls. One of these is the Cola de Caballo waterfall, which has also a central role in a famous hiking route. With Torla as a starting point, you can reach this great waterfall of the Arazas River. On the way you pass by the also beautiful Gradas de Soaso. A perfect plan for nature lovers in the middle of the Huesca Pyrenees.

Ézaro waterfall, in A Coruña. | Shutterstock

In Dumbría, waterfalls and the sea are joined by the Ézaro or del Jallas waterfall. The abundant rainfall in A Coruña and the protection of the Jallas River allows it to be active all year round, although it is in late autumn and winter when it flows most strongly. It runs down for 40 metres, more or less straight, to the Ézaro marina, almost at the mouth of the waterway. 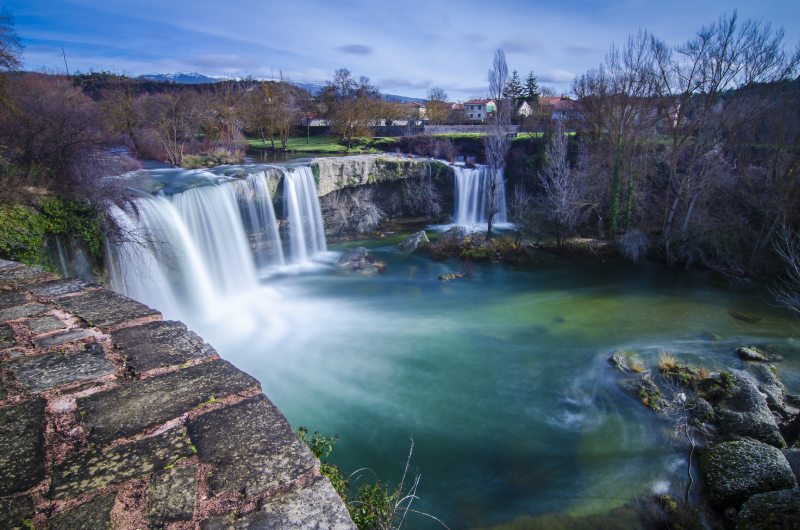 The horizontal factor is what makes the difference in La Tobalina. This waterfall in Burgos is “only” about 20 metres high, but about 100 metres long. In addition, the Jerea, an Ebro tributary, forms a lagoon in which you can bathe during summer. However, it is during the mid-season when this landmark of Burgos located between La Orden and Pedrosa de Tobalina acquires its most spectacular side. Whether due to the spring thaw or the autumn rainfall, the waterfall becomes wild during part of these seasons. 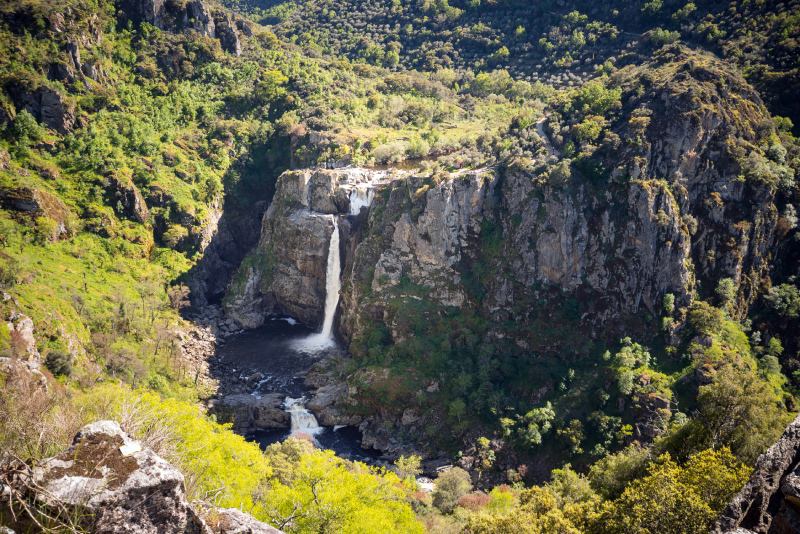 Miguel de Unamuno was dazzled by the Pozo de los Humos, a waterfall about 50 metres high. The river Uces is responsible for its greatness. It is also part of the Arribes del Duero Natural Park. During the months of greatest influx, from late November to May, the strength of the fall creates a spray effect that justifies the name of the place. In addition, in the surroundings there is the Pozo de las Vacas, another smaller waterfall caused by the bifurcation of the Uces River. The nearest towns to see this wonder of Salamanca are Masueco and Pereña. 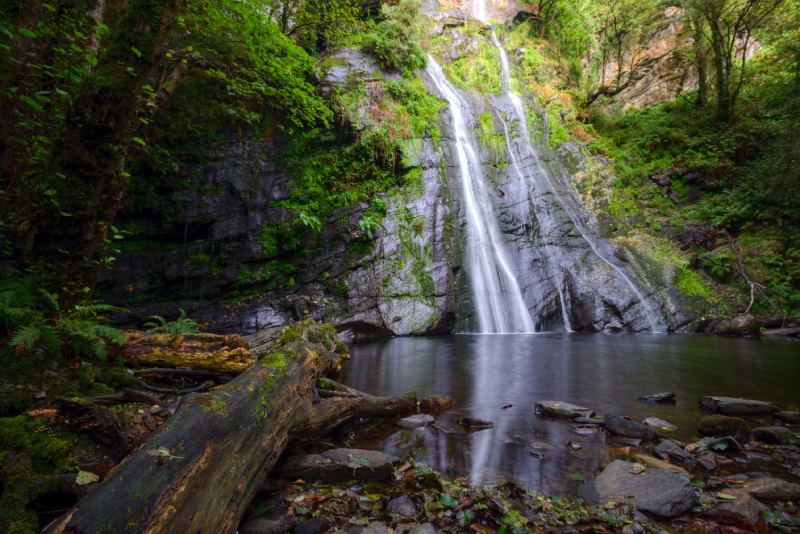 Back in Galicia awaits the huge A Seimeira de Vilagocende. It is located in the council of Lugo A Fonsagrada, part of the Primitive Way to Santiago. It has 50 metres of fall immersed in a beautiful wooded environment. To get to see this waterfall, the largest in Galicia; it is best to walk along the route that is part of it. It only takes an hour to walk, as it is only a one-kilometre roundtrip. Among birches and oak trees, resonates one of the most fascinating waterfalls in Spain. 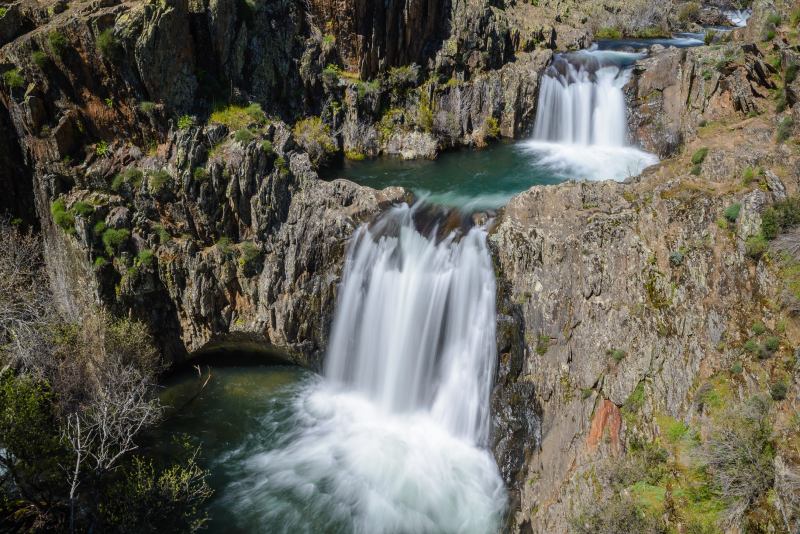 Aljibe waterfall, in the black towns of Guadalajara. | Shutterstock

Finally, we have to return to Guadalajara, in this case to the Serranía. In the middle of the Sierra de Ayllón is located the last of the most spectacular waterfalls in Spain selected. It is the Aljibe waterfall, near Campillo de Ranas. It is, therefore, an ideal supplement if you do the route through the black towns. Its name comes from the two phases into which it is divided, which seem to form tanks or reservoirs. A 10 kilometre marked trail leads to it from the district of El Espinar.