The highest cliffs on the European continent are in Galicia. The cliffs of Vixía Herbeira are 620 metres high, and are located in the Serra da Capelada, between the municipalities of Cariño and Cedeira, in the province of A Coruña. They are also the fourth highest cliffs in Europe.

From the cliffs of Vixía Herbeira you can enjoy one of the most spectacular views of the Galician coast, in a stretch open to the Atlantic Ocean between Cape Ortegal and the village of San Andrés de Teixido. This space belongs to the Artabrian Coast. The image of the powerful waves crashing against the coast, the strength of the wind and the smell of the sea are the perfect excuse to visit the La Garita de Herbeira Viewpoint, the highest point in the sierra. With its more than 600 meters of altitude, it forms a cliff of free fall towards the sea with strong slopes that surpass the 80 percent of unevenness. 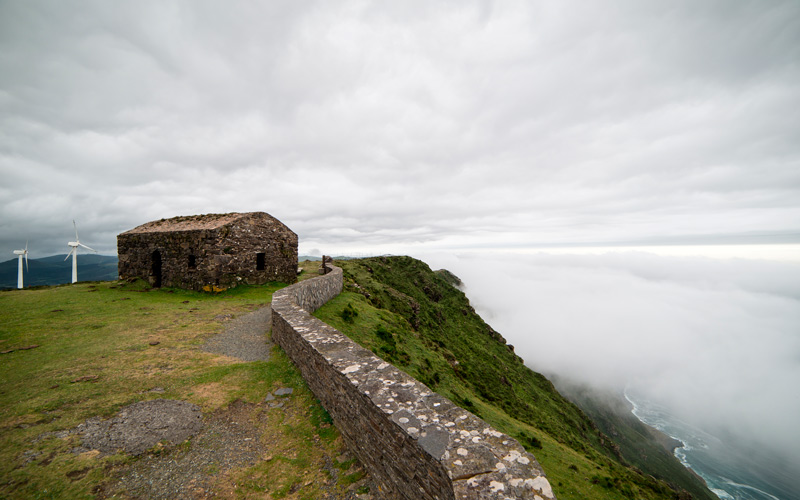 At the Garita de Herbeira Viewpoint, there is a small stone house built in 1805, which was formerly used as a maritime surveillance point. After restoration work carried out in 2003, the sentry box and its surroundings are included in the Sites of Community Importance (SCI) of the Artabrian Coast. From there you can appreciate the impressive view offered by the highest cliffs in Spain and the European continent, especially at sunset.

One of the most appreciated secrets of this space is its morphological uniqueness. Grandiosity of these cliffs has its genesis approximately 490 million years ago, in the stage known as the Upper Cambrian. The collision of two tectonic plates, Laurusia and Gondwana, formed some mountain ranges thousands of kilometers long. The peculiarity of this whole affair is that that collision pushed the remains of those mountain ranges that were sunk at great depths to the surface, which makes these cliffs one of the largest outcrops of eclogian and pyroxenite in the world.

Due to this geological phenomenon, the only beach in the world with black sand of non-volcanic origin is hidden at the bottom of the cliffs. This is known as the Praia de Teixidelo, located in the town of Cedeira. Its dark colour is due precisely to the rocky materials composed of pyroxene. This mineral belongs to a group of silicates that form part of the plutonic igneous rocks, generated from the slow cooling of the magma under the surface. However, very few people know about the existence of this mysterious beach due to its difficult access, so a guide is required to visit it. It is convenient to look at the weather before going, since it can be dangerous if you go out on a foggy day or if the tide comes in.

Very close to the cliffs of Vixía Hebeira is Cape Ortegal, a very mountainous peninsula located three kilometres from Villa de Cariño. This black granite rocky massif stands out for locating the oldest rocks in the Iberian Peninsula and for presenting different geological formations in its terrain: amphibolites, ecloites, granulites, gneisses and ultramafic rocks. For this reason, Cape Ortegal has become one of the main tourist spots in Spain. 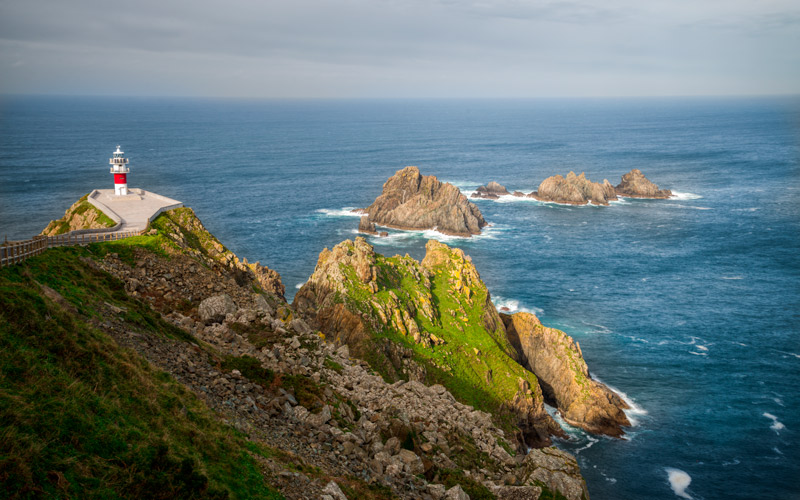 Ortegal Cape is also known for being the genuine zero kilometre between the Atlantic Ocean and the Cantabrian Sea. Its views from Punta do Limo and Punta dos Aguillóns, where a lighthouse stands more than 13 kilometres high, make it a magical place.

This small peninsula is made up of several sensational beaches worth visiting: Fornos beach, Figueiras beach and, above all, Area de Cabalos, whose landscape gives the sensation of being a wild beach.

A few minutes from Cape Ortegal is the fishing village of Cariño. It consists of five parishes: Cariño, Feás, Landio, A Pedra and Sismundi. The chapel of the Virgen del Carmen and the chapel of San Xiao de Trebo, an old Roman and early medieval settlement, are part of the town’s heritage. 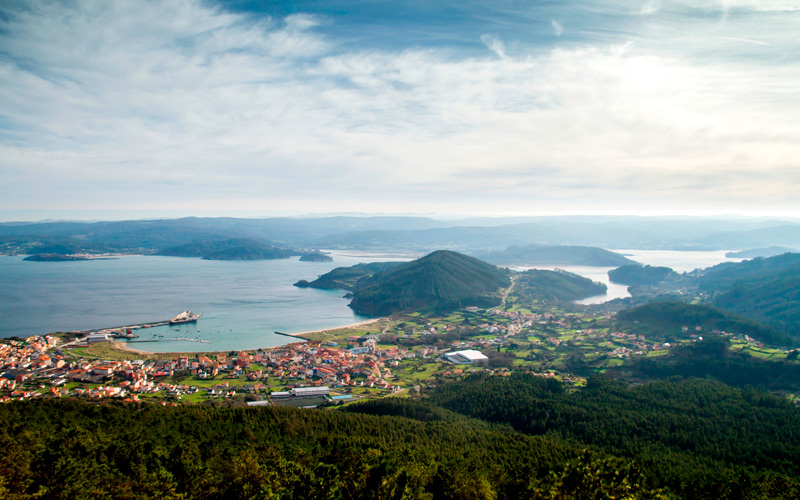 The danza de los arcos is Cariño’s most distinctive tradition. It has always been linked to sailors. Although the antiquity and origin of the dance is unknown, it has been passed down through the years from generation to generation. In the celebrations of the municipality always accompanies this typical dance sailor.

On the way up the Serra da Capelada is the small village of San Andrés de Teixido, belonging to the municipality of Cedeira. This is one of the most touristic places of the Artabrian Coast because of its amazing green mountain landscape in contrast with the surrounding cliffs. A unique sensation that feeds on the legends and traditions that await the village, making it a place steeped in mysticism. Its devotion revolves around the sanctuary of San Andrés de Teixido. 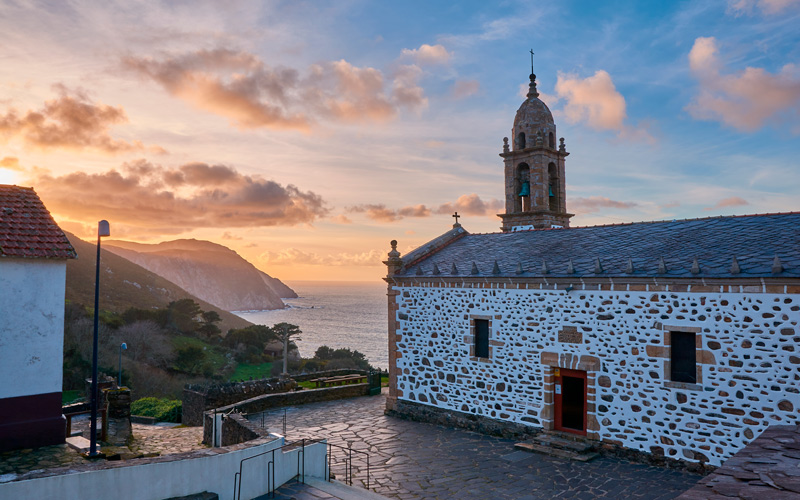 Sanctuary of San Andrés de Teixido, in the municipality of Cedeira. | Shutterstock

This beautiful church in Gothic-Baroque style from the 16th and 17th centuries not only stands out for its stone walls and immaculate white, but also for the legend that surrounds it. It is said that Saint Andrew of Teixido was jealous of the number of pilgrims that Santiago de Compostela attracted, in comparison to the number of visitors that his temple received. In view of the saint’s sadness, God promised him that his temple would be visited in procession by all mortals before entering the kingdom of heaven, and those who did not do so in life would have to do so dead and reincarnated in an animal: “vai de morto o que non foi vivo”. Every September 8th, the Pilgrimage of Santo Andrés de Teixido takes place.

The tourists who visit the sanctuary also stop at the miraculous fountain of the Tres Caños with the intention of making a wish. According to tradition, you have to drink water from the three spouts and then throw a piece of bread into the water, which if it floats means that the wish will be fulfilled. Another custom of the most devout is to wash wounds or sores with water from the spring.

Ruta de los Miradores allows you to travel through this whole landscape and history in an itinerary of 25 kilometers. The route starts from Cariño and ends in Cedeira, or vice versa. It runs through the entire Serra da Capelada, passing by most of its viewpoints, including the Cape Ortegal Lighthouse and the Vixía Herbeira Viewpoint. The route also stops at Cedeira and the village of San Andrés de Teixido.

It is recommended to do the route on the clearest days and without fog; as the views will be better enjoyed. You can also do the route by car or bus from Cariño.