Spain has about 7,500 km of coastline and more than 3,000 beaches. Some are located in secret spots, others among cliffs, even in natural parks or on paradisiacal islands. From unspoilt and curious beaches to freshwater beaches, we can find all kinds. The country has more than 430 beaches with the distinctive Blue Flag. In terms of size, 180 are over two kilometres long and four are even longer than ten. Here are the 13 longest beaches. 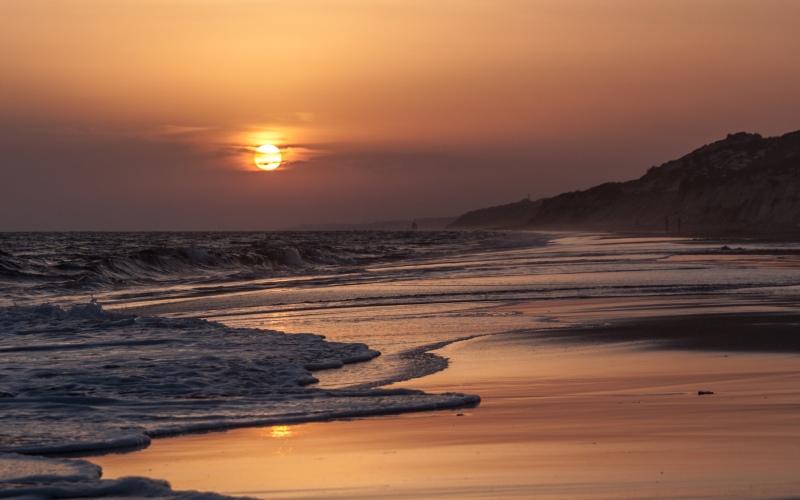 The coasts of Doñana National Park offer a total of 60 km of long beaches. As it is a protected area some parts are of restricted access. In spite of this, it is possible to enjoy unspoilt beaches with free access. With its 28,000 meters, this wild beach is the longest in the whole country. In it there are accumulated remains of marine species, crustaceans and fish. In addition, you can frequently see cetaceans.

As in many other nearby beaches, such as Sancti Petri or Los Caños de Meca, it is possible to combine nature with history. In this case you can find three beacon towers from the 16th century. Although they were once used to spot Barbary pirates, today they serve as a refuge for peregrine falcons. 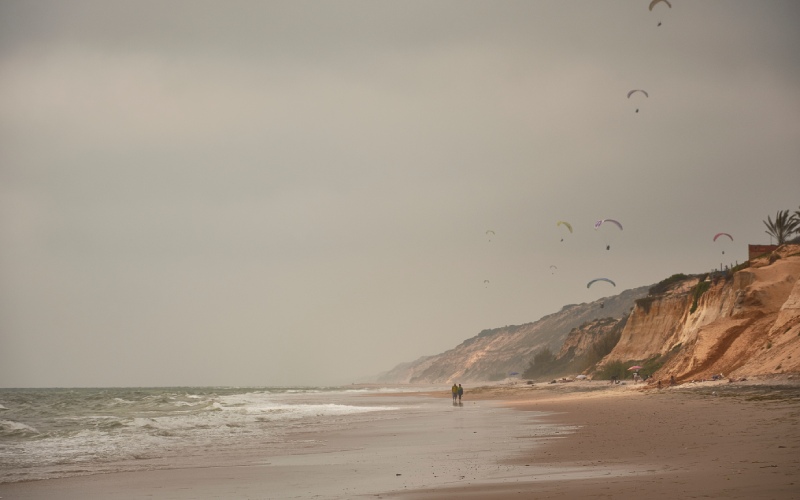 Located to the west of Matalascañas, this beach is located next to Doñana. It is part of the municipalities of Almonte, Moguer, Palos de la Frontera and Lucena del Puerto. It is also within the area of Arenas Gordas. This is another unspoilt beach, without services and difficult to access. It can be reached by stairs and footbridges from Maneli. It allows you to enjoy a long stretch of thin sand and rocks. Also, nudism is usually practiced. Its name comes from the medieval period, as it was the first beach in the kingdom of Castile that led directly to the Atlantic Ocean. It is said that it was Alfonso X himself who gave it its name. 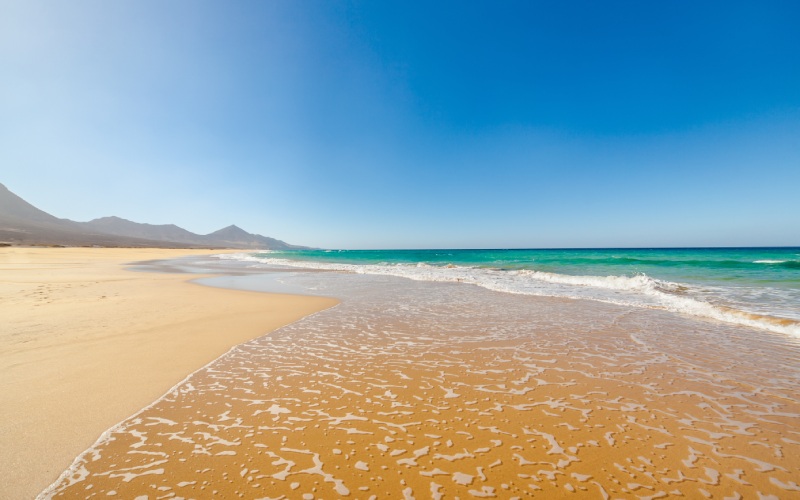 This impressive unspoilt volcanic beach is located in Fuerteventura and offers not only a unique beauty to its visitors but also a multitude of legends. For example, it is said that during the Second World War a secret Nazi submarine base was located there. Accessible from the port of Morro Jable, it stands out for its strong wind and waves. It offers a panoramic view of the mountainous massif of the Jandia peninsula, the highest peaks on the island. In the middle is the enigmatic Casa de los Winter, dating from the 19th century and of German origin. The Cabildo and the Sea Turtle Recovery and Conservation Centre organise the release of turtles from the beach once a year. 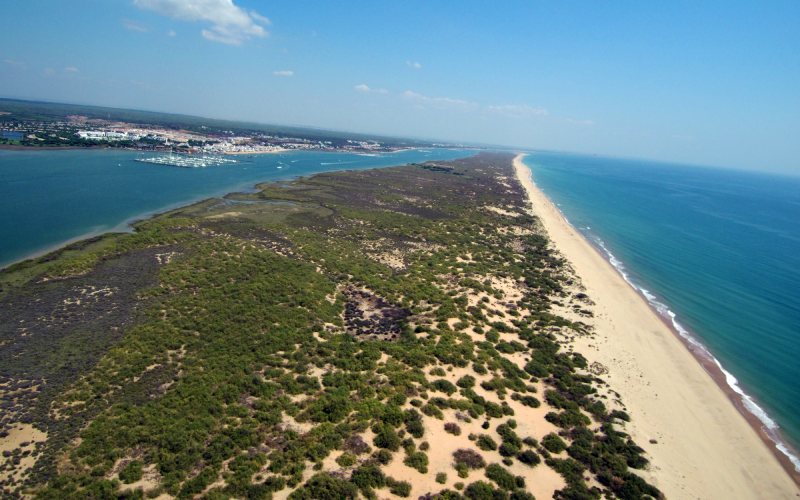 Accessible from the Antilla or by boat from El Rompido, it is located in the municipality of Lepe, in the natural area of Marismas del Río Piedras y Flecha de El Rompido. This beautiful beach, with thin white sand, has an important animal and vegetable ecosystem. Among its protected species is the chameleon, with which it is usual to cross. It has an area where it is possible to practice nudism since 2010 and is considered one of the best naturist and longest beaches in Spain. 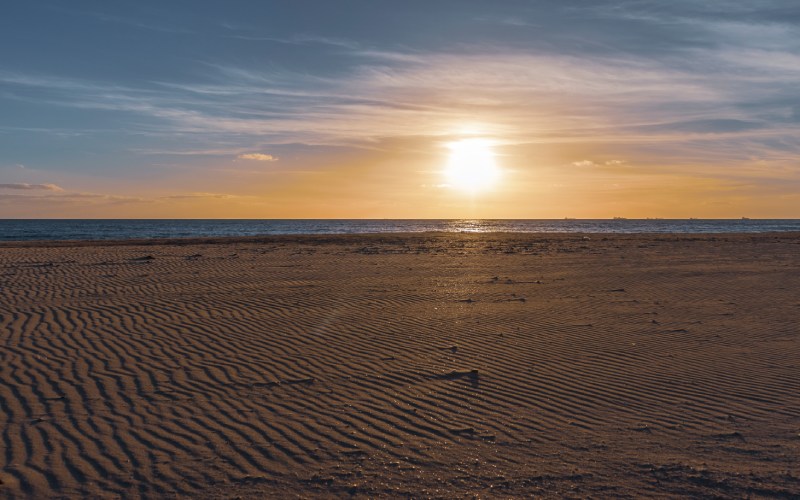 This urban beach of golden sand is located in Mazagón in the municipality of Palos de la Frontera, next to the Castilla beach. Together with this and Doñana beach, they form a spectacular coastline of almost 60 kilometres. Here you can enjoy a wide variety of leisure services for families. Due to its location, it enjoys a large influx of visitors, but its 9,000 metres of extension allow for a certain amount of peace and quiet, as it has several different areas. The closest one to the marina has a multitude of restaurants and beach bars, while the one next to the Parador has pine woods and sand cliffs. Its appearance is thus much more rustic. 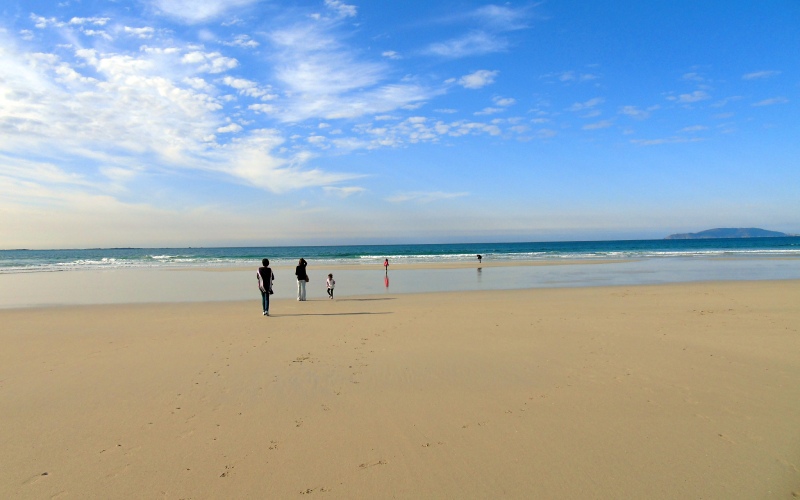 In the north of the peninsula it is also possible to enjoy another of the Spanish longest beaches. This is the case of Carnota, located on the Costa da Morte in A Coruña. With a paradisiacal appearance, crystalline waters and white sand, it is surrounded by a green environment characteristic of the northern lands, in this case Galicia. Its state of conservation is exemplary. It is part of a natural area created by the sandy mouth of the river Valdebois, together with the Caldebarcos Marshes. The area is home to a multitude of migratory birds and endemic flora. According to the German magazine “Traum Strände”, it is one of the 100 best in the world. 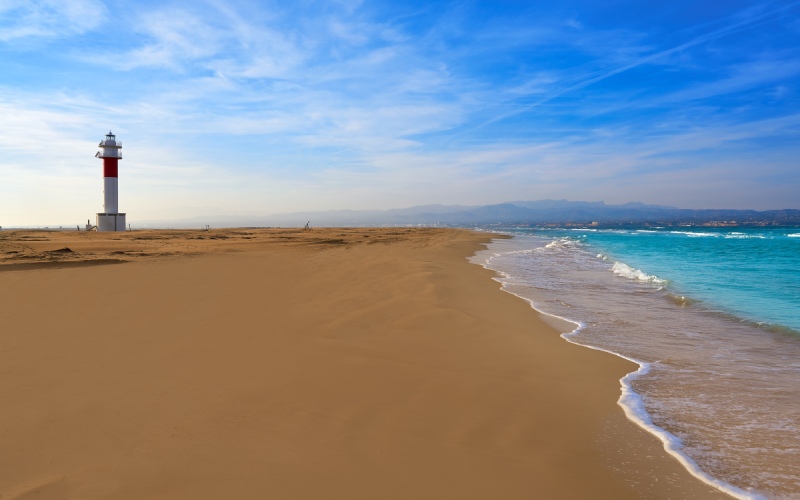 The Deltebre is one of the most beautiful natural areas of Tarragona. La Punta del Fangar is a peninsula of thin, golden sand. On the beach it is compact with the sea water, so it is possible to ride a bicycle to the lighthouse, its true sign of identity. At the same time, the protected native fauna and its dunes, which cannot be stepped on, give it a high ecological value. In spring and summer, seagulls and terns nest there. Birds, insects, small mammals and amphibians proliferate in the area. It is also an important seafood area, its molluscs and oysters are appreciated throughout the peninsula, as well as its rice, which is intensively cultivated in the area. 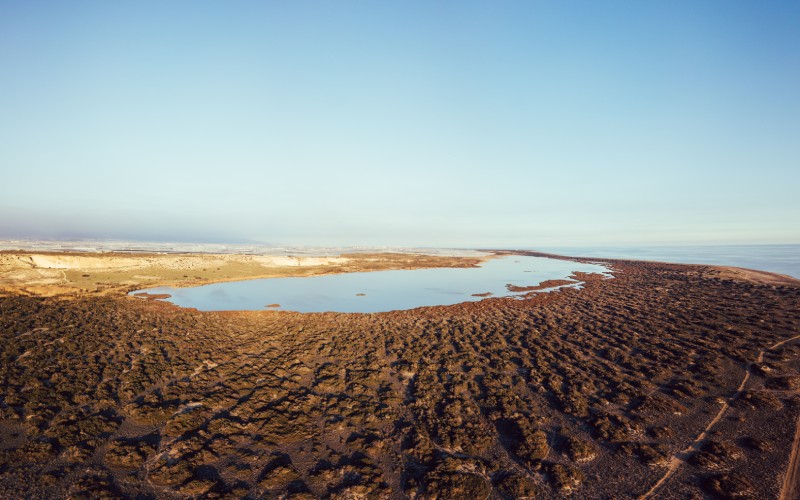 Punta Entinas-Sabinar is a Natural Reserve that includes sandy beaches, dunes, salt flats and small ponds. It occupies the strip that separates El Ejido from Roquetas de Mar, in Almería. An unspoilt beach that offers more than 6500 meters of thin sand. Opposite, on the seabed, is the important Posidonia meadow. The pools offer refuge to different types of birds, such as Audouin gulls and flamingos, on their migratory journey from North Africa to Europe. Finally, the area also abounds in reptiles such as the bastard and horseshoe snakes or the ocellated lizard. 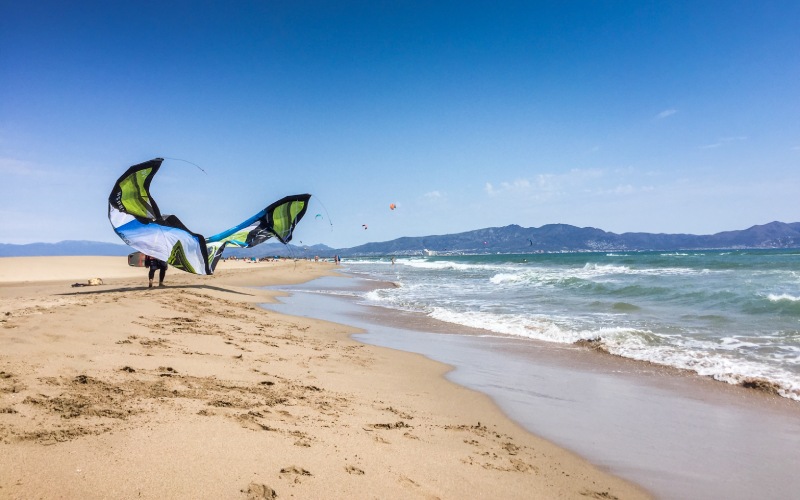 The beach of Sant Pere Pescador is the longest in the whole bay of Roses in Girona. It is located between the mouth of the River Fluvià and the Riuet and is easily accessible. The place is ideal for wind sports such as surfing and kitesurfing, so there is an area reserved for this purpose. In fact, once a year one of the world championship windsurfing events is held here. Another area allows the practice of nudism. Its large extension allows room for everyone and everything. It is located in an area of high ecological value such as the Aiguamolls de l’Empordà Natural Park. Of course, it had to be part of our longest beaches of Spain. 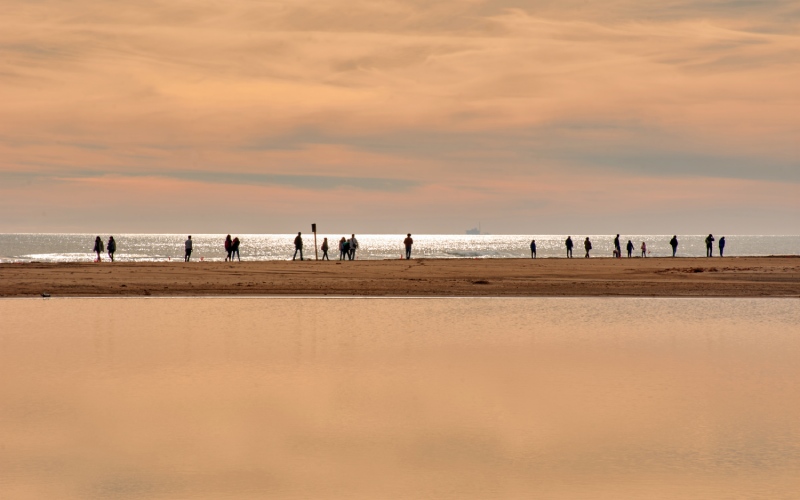 El Trabucador in Sant Carles de la Ràpita is part of the Parc Natural del Delta de l’Ebre. It borders the municipality of Alcanar and the bay of Els Alfacs, the most important natural port in Europe. This appendix goes into the sea as far as the Punta de la Banya and is a wild beach that offers a lot of tranquillity, since its level of occupation is quite low. It has fine golden sand and no services. It is a very appreciated place for the lovers of the naturism. As it is an important point of pilgrimage for water birds, there are surveillance points that allow their observation without any kind of interference.

The beach of Cañillos, also called El Botero, is located in the municipality of Barbate in Cádiz. Surrounded by mountains, with golden sands, moderate waves and a lot of wind, it has an average occupancy rate due to its isolation. The place is ideal for water sports and hiking. Its location near the Barbate River Marshes offers beautiful views of the municipality and the Tagus cliff. 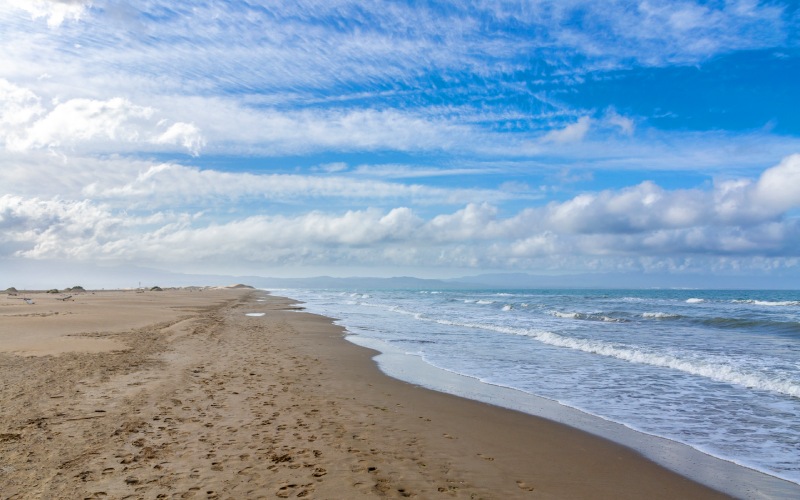 Again another of the longest beaches is located in the Delta de l’Ebre, in the municipality of Sant Jaume d’Enveja, is one of the longest beaches in Spain. Very quiet, this naturist beach offers a shower service and parking. With thin and golden sand, it is surrounded by crops, lake areas and a sea of warm waters as the Mediterranean. In spite of being in a remote place, it has an easy access and can be reached by car. 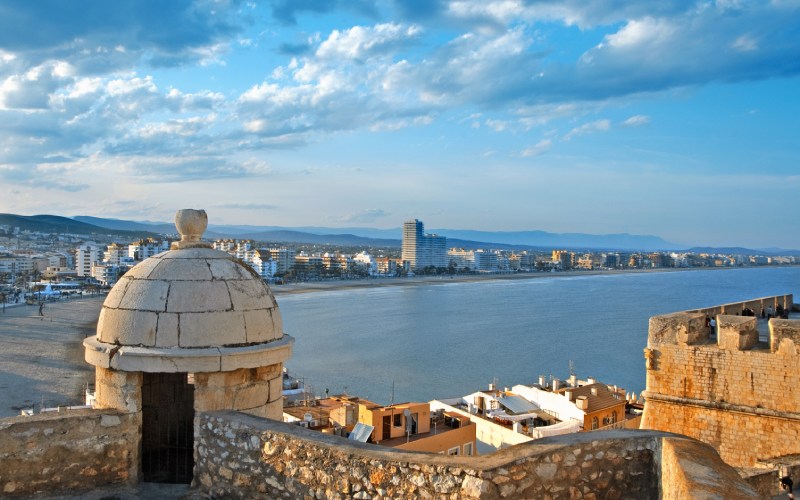 The ranking ends with the Norte Beach. Pope Luna’s Castle contemplates, from its height, the most important beach of Peñíscola, in Castellón. It has all kinds of services including the possibility of access for people with reduced mobility. This beach is usually part of the list of the best beaches in the Valencian Community thanks to its size and cleanliness. As a curiosity we must mention that the promenade leads to the wall and the streets that give access to the castle, where several scenes of Game of Thrones were filmed.