Few things have fascinated people since they were children as much as dinosaurs. The attempt to understand a little more of our prehistoric past involves the great reptiles that dominated a land that is still far from how we know it today. The reasons for their extinction, moreover, have fed a legend that is still present today. What we may not know is that the dinosaurs left an important mark in Spain because we can still find in many corners of the peninsula impressive samples of how they inhabited the same land we walk on now.

The first records of dinosaurs found in the Iberian Peninsula are from the end of the 19th century, both in Portugal and Spain. They mainly correspond to the transitional period between the Jurassic and Cretaceous periods and their importance has made Spain one of the geographical centres for the study of dinosaurs, both for professionals and amateurs. It is worth drawing up a map to rediscover and follow the fossil remains and footprints, literally, of the dinosaurs in Spain.

The area is already one of the favourite destinations for any lover of paleontology as the cradle of humanity. Only an hour’s drive from the Atapuerca site, this town in Burgos has become one of the most important centres on the peninsula for dinosaurs. They have a small but excellent museum where one of the best and most extensive collections of dinosaur fossils in Spain is gathered.

The museum in Salas de los Infantes has numerous species, among which the fossil samples of the iguanodon stand out, but there is also room for many other species from carnivores to plants that offer a picture of the entire Mesozoic period in Castile and Leon. The samples come from the numerous sites in the surrounding area, but if there is one that stands out for its interest to enthusiasts, it is the site of Costalomo.

Ichnite or dinosaur footprint at the Costalomo site. | Fundación CyL

After passing through Salas de los Infantes and its museum, a visit to one of the most important open-air sites on the peninsula is a must. It is only a few kilometres away from the town, reaching the province of Soria. Costalomo, Burgos, is an open-air museum of dinosaur footprints. There is evidence of more than 200 giant reptile footprints in this site, many with peculiarities such as having a relief, instead of being a hollow on the surface.

One of the most striking footprints is that of the dinosaur nicknamed “Atila“, a dinosaur that must have reached more than ten metres in length and four metres in height. Following this route of ichnites, as the dinosaur footprints are also called, the path leads to the last stop in the area, Regumiel de la Sierra.

The numerous deposits in this area reach the town of Regumiel, near the Laguna Negra, another point of great geological interest. El Frontal site should be highlighted, where more than 80 footprints remain, mostly of iguanodonts. The remains found suggest that the area was occupied by large rivers, and it was probably a large group that came to the banks to feed and drink water.

We can also find other significant samples of footprints in the nearby towns of Mambrillas de Lara, Quintanilla de las Viñas or Barbadillo del Mercado. 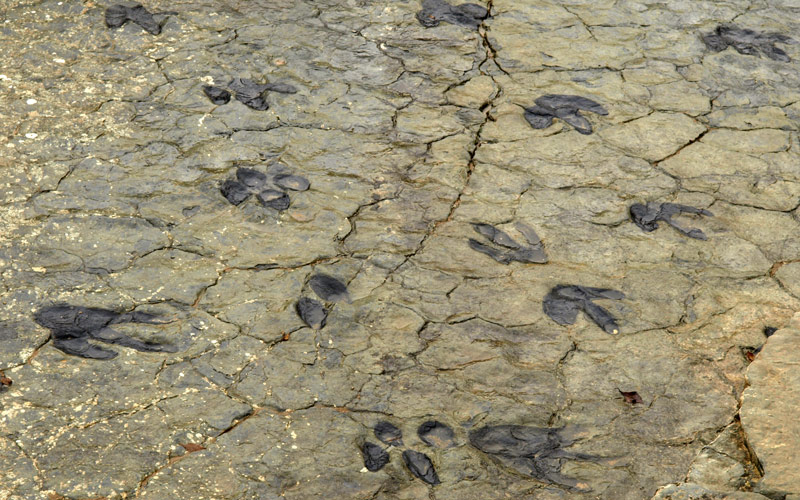 In the northern part of the province of Soria, another of the most outstanding and best preserved routes of dinosaur footprints emerges. This is a specially designed route for families with children that leads, during the different open-air sites, to scale recreations of the dinosaurs that left their footprints on the rocks.

Passing the Oncala port, the route starts at the visitors’ centre, where there is also a palaeontology classroom in the town of Villar del Río. A total of four defined routes have been marked, also with routes to be done on foot, and during the whole visit there are different informative and leisure activities to be done with the family.

Cuenca has important sites that make up another of the most interesting points for the followers of paleontology and dinosaurs in Spain. In fact, the area is known as the “Atapuerca of the dinosaurs”. The tour begins in the capital, with the MUPA, the city’s Paleontology Museum, where fossils from all over Castile La Mancha are collected. Also included are the remains of two of the most important sites in the area, Las Hoyas and Lo Hueco, from the Lower and Upper Cretaceous respectively, that is, records that are more than 125 million years old.

Both sites can also be visited outdoors and have exhibition centres open to the public. The route, after passing through the city, continues through Fuentes, with the Lo Hueco site, and continues through Cañada del Hoyo and Los Palancares, to the Las Hoyas site, in the town of La Cierva. The area seems to have been a small paradise for large herbivorous dinosaurs, with few predators compared to other areas of the peninsula. As a curiosity, a large part of the enormous site of Lo Hueco, with nearly eight thousand fossils found, was discovered with the works of the AVE Madrid-Valencia. 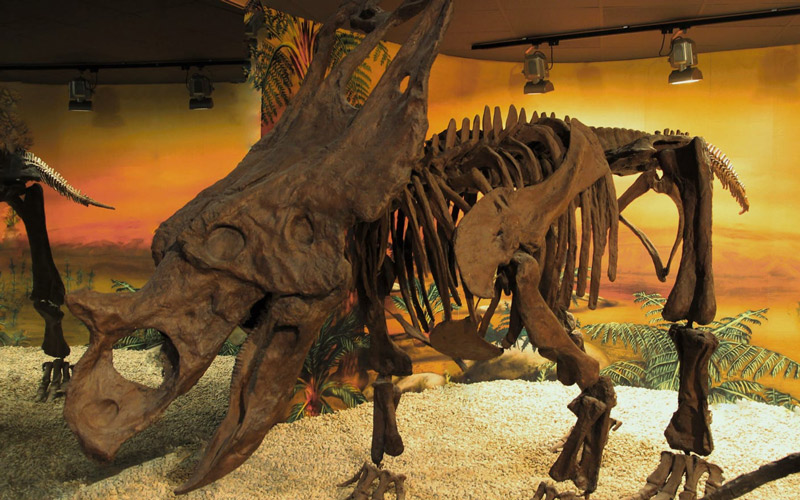 Chasmosaurus in the Paleontological Museum of Elche | MUPE

Promoted to collect the paleontological wealth of the whole community and in particular of the region, the museum of Elche is an interesting visit with pieces such as mastodon fossils from Crevillent or Morella (Castellón). There are guided tours by the museum staff and many activities available throughout the year for children. A way to approach the interesting geological history of the Mediterranean coast with an extensive collection of fossils. 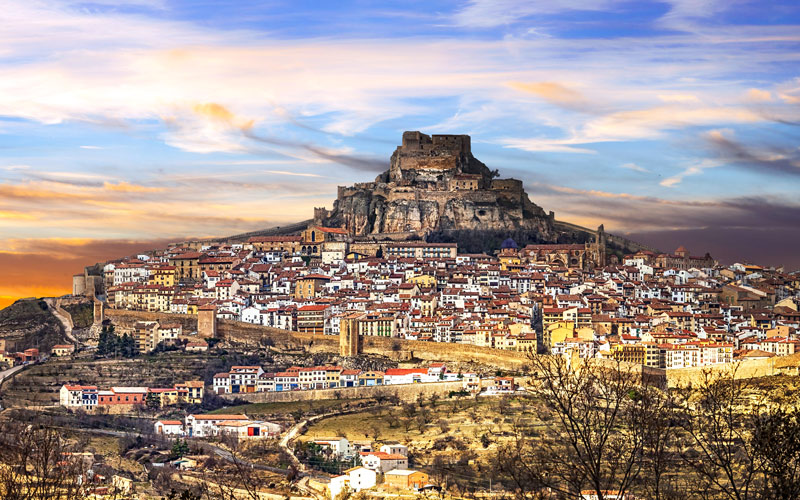 Morella, originally covered with water in the Cretaceous period. | Shutterstock

Morella is located on the north inland strip of Castellón. Thanks to the hard work of two Spanish universities, UNED and UNAM, more than 5,000 fossils have been discovered in the area, identifying the region as a fundamental point in the peninsula for dinosaur lovers. From fossil remains of new species of turtles, molluscs or crocodiles to a 20-metre-long sauropod, the site is still in full swing and most of the pieces have hardly been catalogued. In the town, with an important cultural offer, you can visit the Temps de dinosaures Museum to learn more about this area that was submerged by the waters during the Cretaceous period.

Dinópolis, leisure in the land of the dinosaurs, Teruel

The province of Teruel has become another of the most attractive regions for dinosaur lovers. The discoveries in Riodeva and Galve have helped to build up a whole theme park in the province that has Dinópolis, near Teruel city, as its main headquarters, and other small leisure sites in nearby towns. Dinópolis has a paleontological museum, simulators, attractions and a huge Tyrannosaurus Rex brand. They also have the largest dinosaur in Europe, the Turiasaurus Riodevensis, found in the area, as its name suggests. A day trip that can be complemented with the interesting sites of nearby municipalities.

Paleontologists for a day in Sabadell, Barcelona

Many of the national proposals and museums dedicated to palaeontology and dinosaurs in Spain have come to fruition thanks to the work of foundations such as the InstitutCatalà de Paleontologia. The ICP is the foundation in charge of the Miquel Crusafont museum that we can visit in Sabadell. The layout they have chosen has an interactive character and you can become a palaeontologist for a day or enjoy the fossil restoration laboratory. They have other temporary exhibitions and it is a place not to be missed by children. 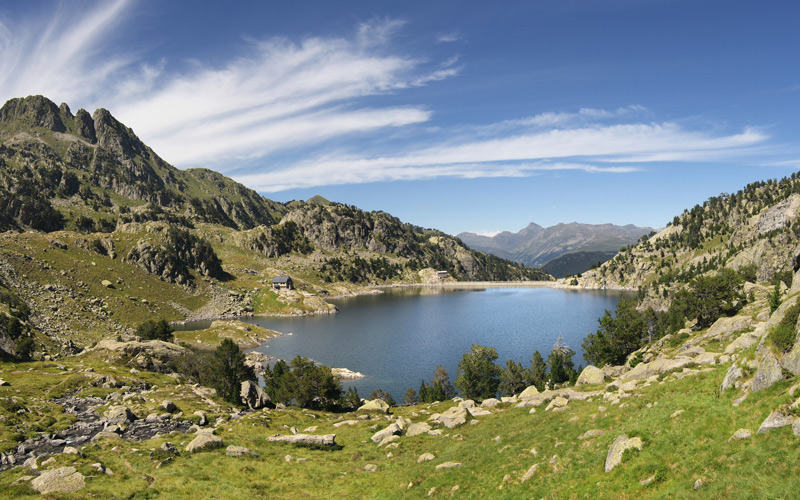 As we approach the Pyrenees we return to the open-air excavation areas following the trail of the dinosaurs. The site of Molí del Baró in Lleida has become the most modern site found in Europe to date, with hadrosaur fossils, titanosaur eggs and bone remains of carnivorous dinosaurs. Thanks to the different associations that make up the Dinosaurs of the Pyrenees route, there are several interpretation centres throughout the region. In addition, in Coll de Nargó we can find Dinosfera, a space where to enjoy real fossils and exhibitions focused on dinosaurs in Spain.

Route of the dinosaurs in Arén, Huesca 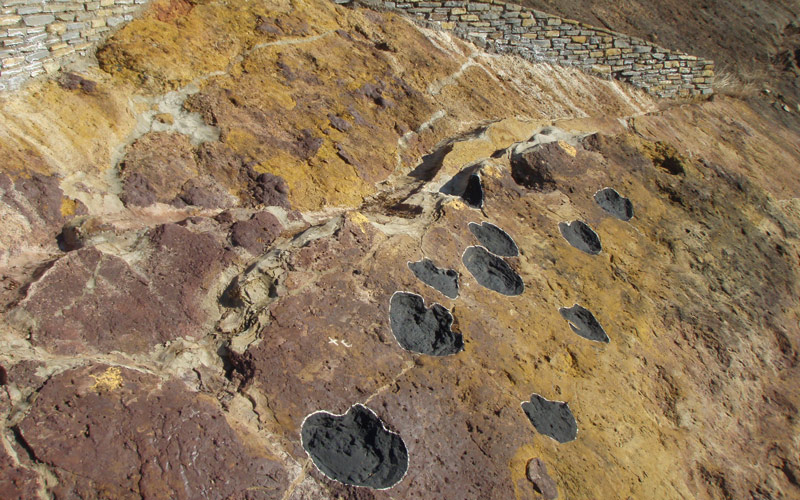 The Alto Aragon area has another important paleontological area in Arén, Huesca. Specifically, the remains found are both dinosaur footprints and fossils. The local museum is an extension of the University of Zaragoza’s own Paleontological Museum and includes more than 500 m² of exhibition space in a tour with walkways, information panels and interactive reconstructions aimed at families with children. The Arén sites have been declared a Site of Cultural Interest.

In the footsteps of Enciso’s dinosaurs, La Rioja 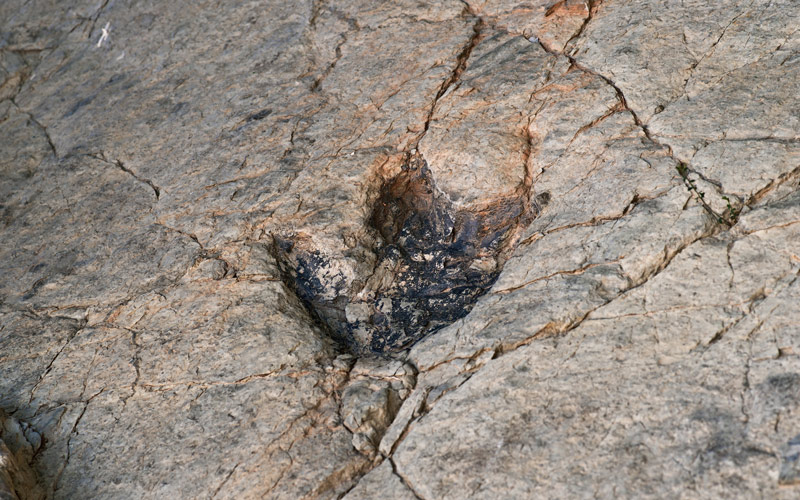 Enciso’s Dinosaur Trail is one of the best known dinosaur routes in Spain. It is possible to do it on foot and it passes through some of the most important sites of ichnites in La Rioja and some of the best preserved in Europe.

If it is a trip with children, it is possible to finish the route with a party ending in the paleoadventure space El barranco perdido. It includes a multi-adventure circuit, “Cretaceous beach” with a swimming pool and a museum where you can learn a little more about dinosaurs. The area offers many options both for gastronomy and active tourism for those who do not travel with children.

About 30 km from Enciso, in Igea, there is the La Rioja Paleontological Visitors’ Centre with workshops and activities at local sites. It has the most extensive collection of fossils available in the province and is easy to access and has an excellent level of conservation, including the little icons of the Barranco de los Cayos, on the road from Arnedo to Cornago. The area was surrounded by lakes, so the footprints are clearly distinguishable and sometimes reach a depth of 10 cm.

The coast of the dinosaurs in Asturias 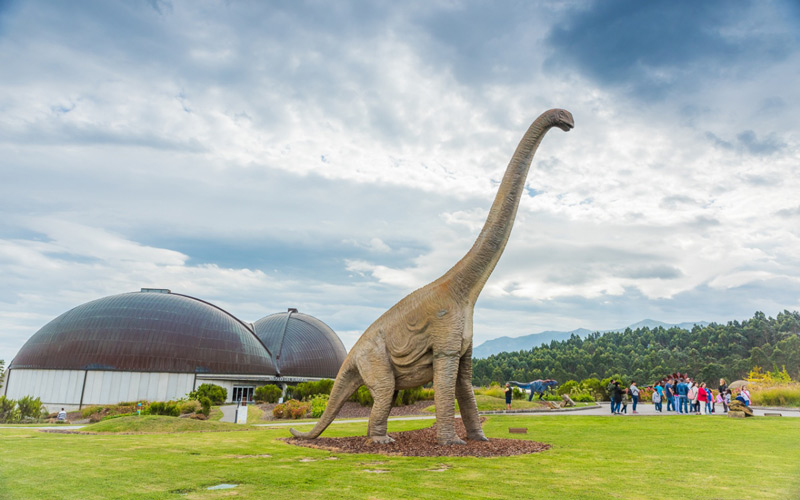 An unforgettable landscape along the Asturian coast that also discovers another interesting route of the dinosaurs in Spain. From Ribadesella to Gijón, we can find finds of ichnites conveniently marked. It is a perfect itinerary to do with children with spectacular views that go through the councils of Colunga, Villaviciosa and Ribadesella.

In the very town of Colunga we find the Jurassic Museum in Asturias, MUJA. Located at the top of a cliff and with a tridactic footprint, the permanent exhibition shows a journey through time from the Premesozoic. It also has a huge garden with replicas of the sites and a play area for children.