The different monuments and the cathedral are witness of the interesting history this city has. However, that is not all, since Lleida also has an excellent gastronomy.

Plan your stay in Lleida

Things to do in Lleida are mainly located in two main areas: one is the top of the hill (where the castle and the old cathedral are) and the old city down the hill. You can spend half a day going through the different main sights Lleida has in both parts. Then, if you had more time, you can visit the nearby localities: Tárrega, Agramunt and Balaguer.

What to see in Lleida

The Old Cathedral is the symbol of this city. In principle, it was designed in a Romanesque style but then Gothic elements were incorporated as well. This temple has three naves, an impressive octagonal dome, a cloister from 13th century (which allows one amazing view of the city), and a bell tower from the 14th century only accessible by those fit people willing to climb 238 steps.

Behind the cathedral, one can find the remains of the Zuda Castle (also known as Rei Castle), that is, the fortress built by Arabs before 882 and employed between 1031 and 1036 as a refuge for the deposed Caliph of Córdoba, Hisham III. It was also the residence for the Counts of Barcelona. The rooms of the house surrounded the courtyard; there was a lookout of the valley in the northern part of the house; and the Royal Chapel was in the eastern part of the building. 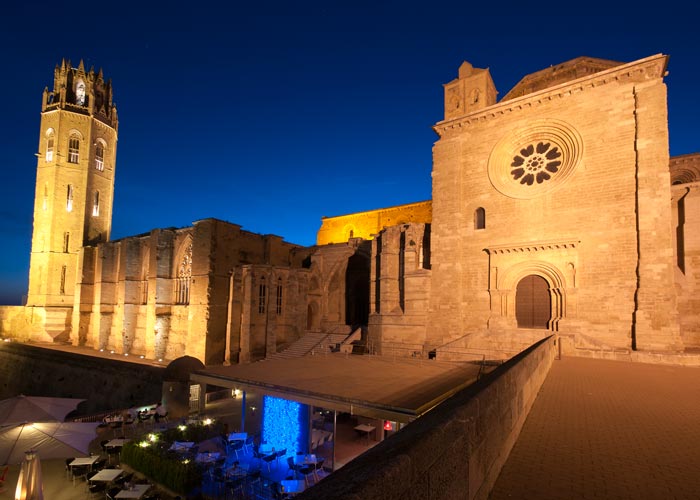 The New Cathedral, neo-Baroque in style, was built in the 18th century. It houses the Santa María Hospital (15th century), Gothic in style, and with a magnificent interior courtyard where the Dwarfs Fountain is placed. San Martín Church, set up in the 12th century, worked as a municipal prison in the 19th century –although it was remodeled to house the Diocesan Museum of Lleida. Some other buildings you might enjoy are the City Hall (13th century, Romanesque in style) and San Juan Church (19th century, neogothic in Style).

The Llotja of Lleida, the old fruit and vegetable market known as Mercat dels Pasegos, is now a conference center. The rooftop is now a lookout from where to enjoy an amazing view of Javier Manterola’s bridge and the Old Cathedral.

Finally, if you want to relax a bit and enjoy this city’s nature, visit Mitjana Park (northwest of the city) or the Champs Elysees Park (1864, French style and located in the Cappont Quarter).