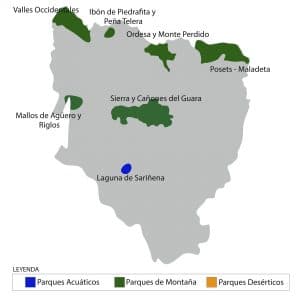 The Ordesa and Monte Perdido National Park, located in the heart of the Pyrenees in Huesca, was declared as National Park by the Government in 1918. It was extended to the current 15,608 hectares in 1982.

The park is formed by four valleys (Ordesa, Pineta, Añisclo and Escuaín) and the calcareous massif of Las Tres Sorores.

This one is at the same time formed by the hills Cilindro, Añisclo and the famous Monte Perdido (at 3,35 m, it is the highest point in the park).

Each of these valleys has its own characteristics, therefore it is a territory with great natural diversity. Thus, there you will find the rough Escuaín Gorges, the huge breach of Añisclo Canyon, the natural beauty of the circo de Pineta or the picturesque vignette of the Ordesa valley. This is the area with the best access and the highest visitor rate.

The Ordesa Park has a wide range of vegetal and animal species. The pine groves of scots pines, black pines, silver firs, beech trees or Portuguese oaks cohabit with several flower species such as the famous edelweiss.

In terms of fauna, there are several specimen of bearded vultures, golden eagles, capercaillies, Eurasian eagle-owls, barn owls, wildboars, chamoises and marmots. Marmots have a strong presence in the vicinity of the Cola de Caballo.

From the village of Torla there is an entrance to the meadow of Ordesa. It is usually the started point of the most popular route among the visitors. It follows the riverbed of Aranzas river, continuing by the Gradas de Soaso to the waterfall known as Cola de Caballo.

From Cola de Caballo the orography is rougher, so it is just recommended for the most prepared visitors.

Ordesa and Monte Perdido National Park can be accessed from various points of interest. The most popular are Bielsa, Fanlo and Torla. A less frequented option is to go to Escalona, from where the road starts to the valleys of Añisclo and Escuaín.

Those who want to enter through the Pineta valley can consider the comfortable Bielsa as a place to eat. Those who choose the Ordesa valley should eat in the old stronghold of Torla.

During peak season (Holy Week, summer and bank holidays during Pilar festival), the access to the Ordesa Valley is only done by bus that came from Torla regularly. There is also in the village a large free car parking.

Furthermore, during this time of the year, the access road to Añisclo becomes a one-way entrance.

Aragon, hiking, national park, Pyrenees
It may interest you...