The Maestrazgo is a historical region shared between the provinces of Teruel and Castellón. It is located to the southeast of the first one and to the north of the second one, although the limits are not very clear. The charisma of this territory becomes more intense when you discover that it was a land of Templars, battles, mysteries and Christian faith. Here is a route through the most beautiful villages of the Maestrazgo. A land to enjoy castles and a great medieval essence in towns like Morella, Cantavieja or Mirambel. 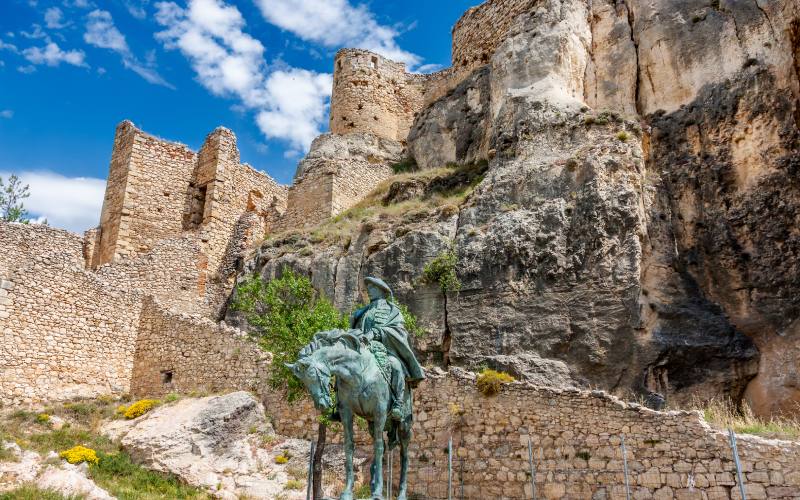 Morella in the Maestrazgo. | Shutterstock

The characteristic physiognomy of Morella welcomes every visitor. Situated on a hill about 1,000 meters high and crowned by its impressive castle, this village seems to have stopped in time. Along with the military fortress, the Archpriestly Basilica Santa Maria la Mayor and the Governor’s Palace are two essential visits. 6 kilometres from the town are located the cave paintings of Morella la Vella, registered as World Heritage by UNESCO. As for the cuisine, highlights are the cecina and croquettes from Morella. 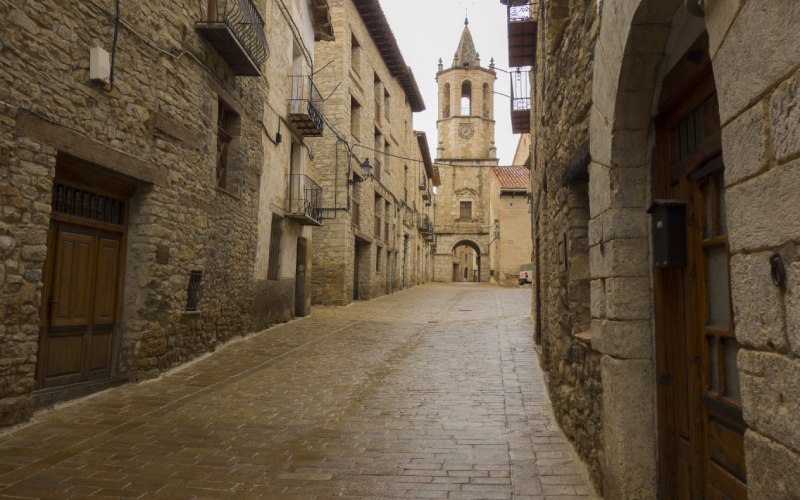 From Castellón it is time to jump to Teruel to get to Cantavieja. Its main square, with a porticoed character, is considered one of the most beautiful in the region of Aragon. It seems that when the church of La Asunción was built, its architect indicated that there was “not one like it in Rome”, so it is easy to imagine its grandiosity. The traces of the Templars can be seen on its ancient walls, which still have their towers. The Casa del Bayle, with its wrought iron balcony, is also a must. The Museum of the Carlist Wars of Cantavieja is also fundamental for understanding the historical importance of the Maestrazgo. 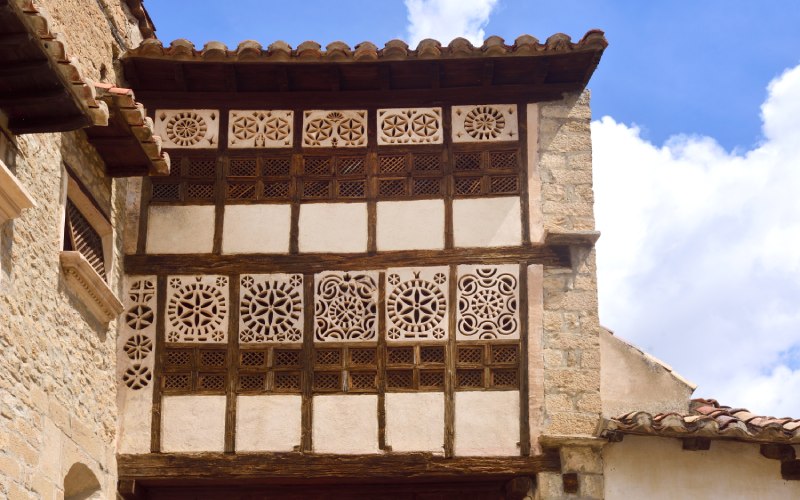 Only 20 minutes separate Cantavieja from Mirambel, undoubtedly one of the most beautiful villages in the Maestrazgo. When walking through the old town it is easy to see the Portal de las Monjas. This old entrance to the wall is notable for its beautiful latticework of mud and plaster. It is located next to the convent of Las Agustinas. It is the symbol of this town in Teruel. The route through the town is dotted with impressive mansions, hermitages and stone houses. Its beauty made it worthy of the Europa Nostra Gold Medal some years ago. 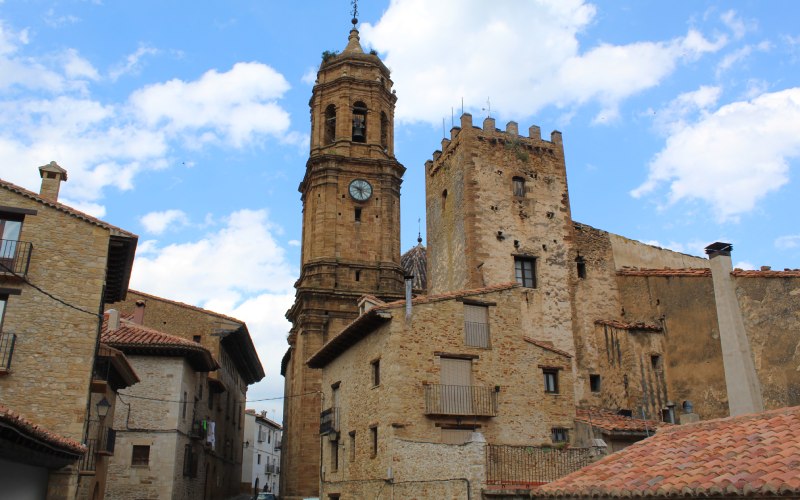 The next stop is La Iglesuela del Cid, a beautiful stone village located at the top of a promontory at an altitude of over 1,200 metres. In its old town, which has been declared a Historic-Artistic Site, you will soon reach the Torre de los Nublos. This is the old homage tower of the Templar fortress in the town. The Renaissance palaces and mansions such as the Matutano-Daudén stand out. The church square is, on the other hand, one of the most charming corners of the place. As a curiosity, the name of this town is due to the fact that it was Rodrigo Díaz de Vivar himself, alias El Cid, who fortified it. 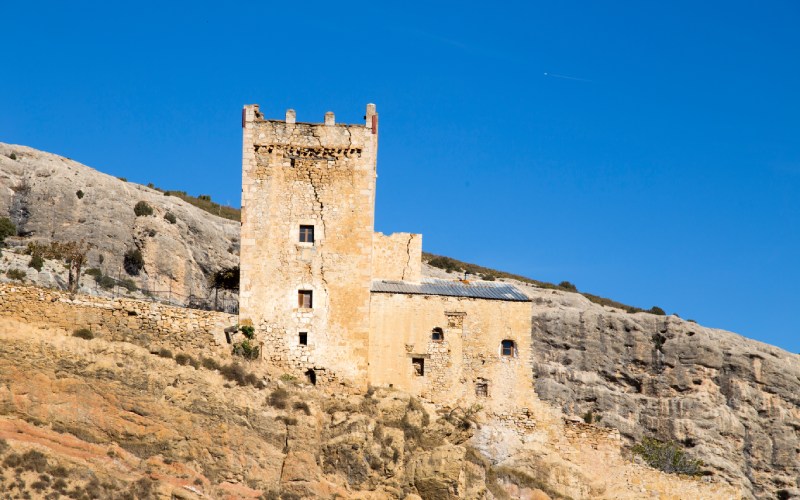 This village, Tronchón, is not only attractive for its architectural heritage; but also for its gastronomy, in which its cheeses stand out. Tronchón cheese is mentioned, in fact, in Don Quixote. But this town also comes in through the eyes as well as the stomach. The church of Santa María Magdalena, from the 17th century, is one of its signs of identity, as well as the palace of the Marquis of Valdeolivo and the town hall. The medieval prison on a rock is also very peculiar. A very special village in the Maestrazgo region. 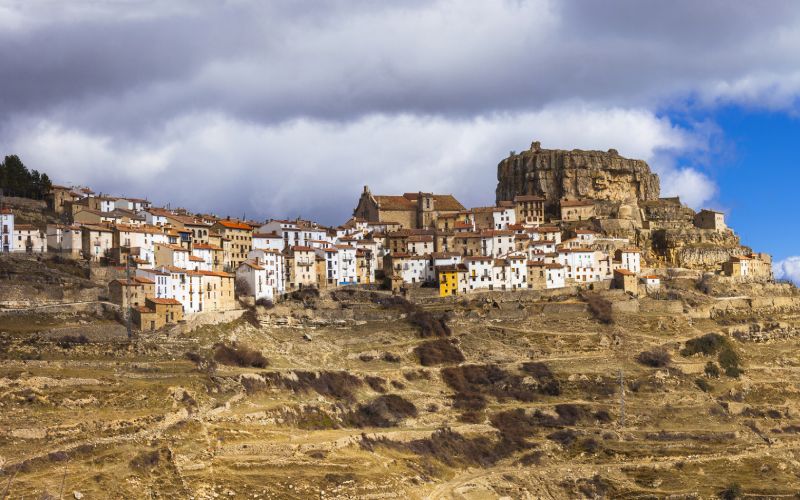 The beautiful village of Ares del Maestrat is made up of white houses and belongs to the province of Castellón. It is not only one of the most beautiful villages of the Maestrazgo, but of the whole Valencian Community. Due to its location on the top of a hill at 1,190 metres above sea level, it is advisable to go to the viewpoint to contemplate an impressive panorama. With a population of barely 200 inhabitants, spending a weekend in this place is synonymous with disconnection. Very popular is the path of La Mola, which leads to the summit of La Mola de Ares. On the way up, you can enjoy the bucolic landscapes of the surrounding valleys. 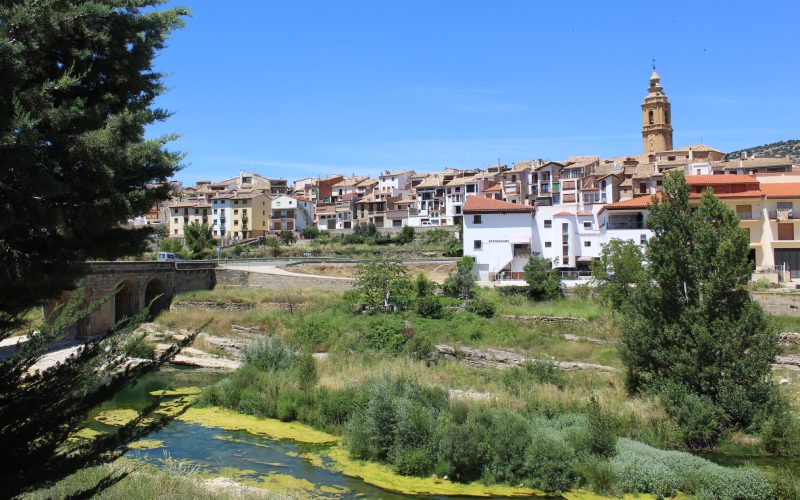 Halfway between the cities of Castellón and Tortosa is Forcall, a village that impresses from the moment you step on it, given the number of stately homes, palaces and hermitages it has. We must not forget its arcaded square, the Osset-Miró palace or the Casa de les Escaletes, so called because of the two rows of stairs that lead to the entrance door. But, in addition, a visit to Forcall offers the opportunity to immerse yourself in one of its most traditional trades: the making of espadrilles. 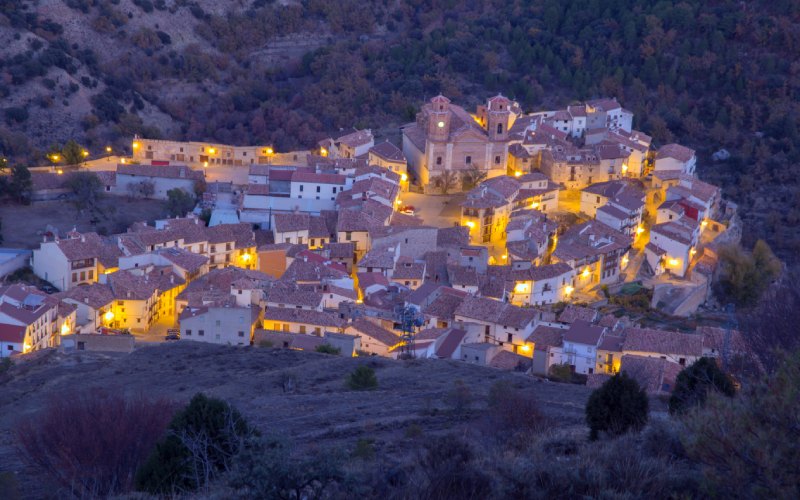 This is one of the architectural gems of the historical Maestrazgo, Villarluengo, standing in a somewhat rugged setting. Like the other towns in Teruel mentioned, it is part of the Maestrazgo Cultural Park, a group of municipalities that combine equal parts of heritage with a natural environment. Villarluengo contributes to this unique club with attractions such as the Plaza de las Tablas or the Renaissance church of La Asunción. The balcony of Los Forasteros is an ideal corner to contemplate the immensity of nature. Also spectacular are the Órganos de Montoro, peculiar rock formations. 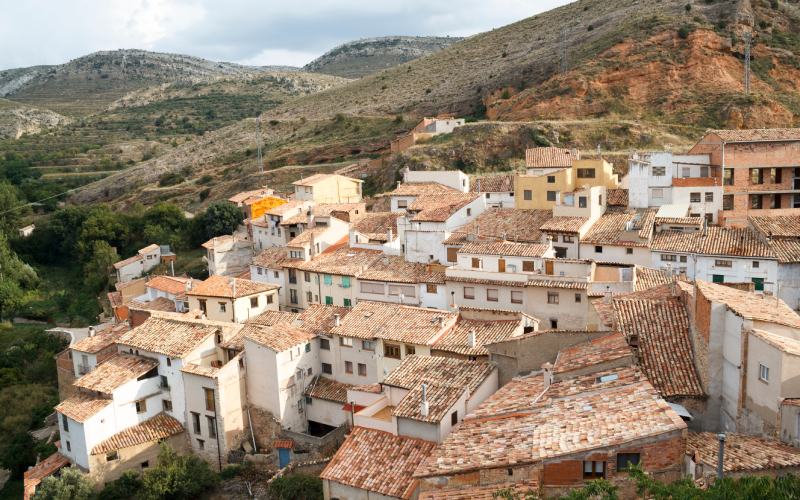 One of the most beautiful spots in the Maestrazgo is located near Molinos. These are the Grutas de Cristal, which are a surprising journey through the depths of the earth. Stalactites and stalagmites of colours accompany a unique journey and, in addition, they are the scene of the annual Music and Word Festival. After this explosion of colours, it is time to wander through the cobbled streets of Molinos, where corners such as the church of Nuestra Señora de las Nieves or the town hall await. If there is a desire for more, the natural environment of the Pozo del Salto is also of remarkable beautyv.

Dinosaur footprints in Spain, 13 places to meet them
Few things have fascinated people since they were children as much as dinosaurs. The attempt Más información

Albarracín, a marvel perched on a rock
[vc_row][vc_column][vc_column_text]Located in Teruel, this is one of the most beautiful villages in this province. It Más información