Incredible as it may seem, it is possible to travel internationally without leaving Spain, you just have to know where to go. Spain’s heritage is so rich that it hides treasures that can take us to exotic Egypt, iconic New York or sunny Greece, among many others. Here is a compilation of some Spanish towns that hide gems from other countries (or that appear to be so). However, for those who wish to travel around Europe in a single day, there is nothing like visiting Parque Europa in Torrejón de Ardoz, where 18 replicas of European monuments are on display in miniature. 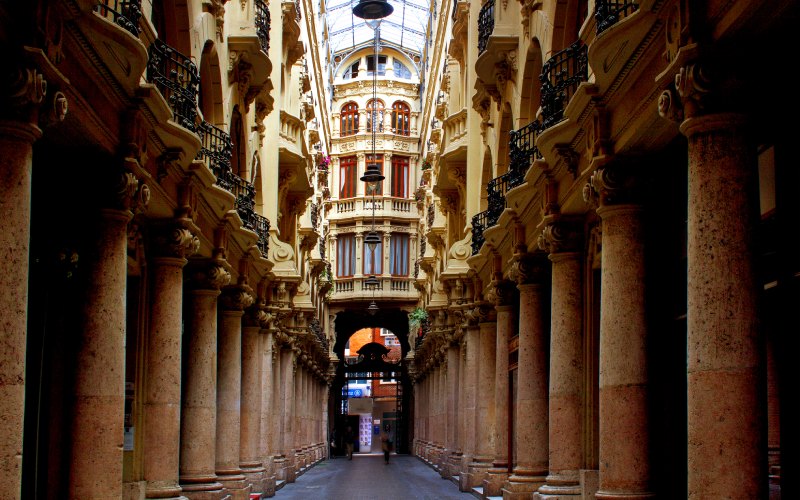 Among all the hidden treasures of the province of Albacete one of the most beautiful is Pasaje de Lodares. This modernist gallery surprises the visitor with its Italian style and spectacular monuments. It was built in 1929 by Gabriel Lodares, to whom the gallery owes its name, with the aim of creating a commercial and residential luxury passage inspired by those that already existed in Naples and Milan. As far as architecture is concerned, it is a majestic gallery, made up of 44 Ionic columns and 12 pilasters. The complex forms one of the most elegant streets in Albacete; bringing together the most notable characteristics of the European trend known as the Belle Époque. 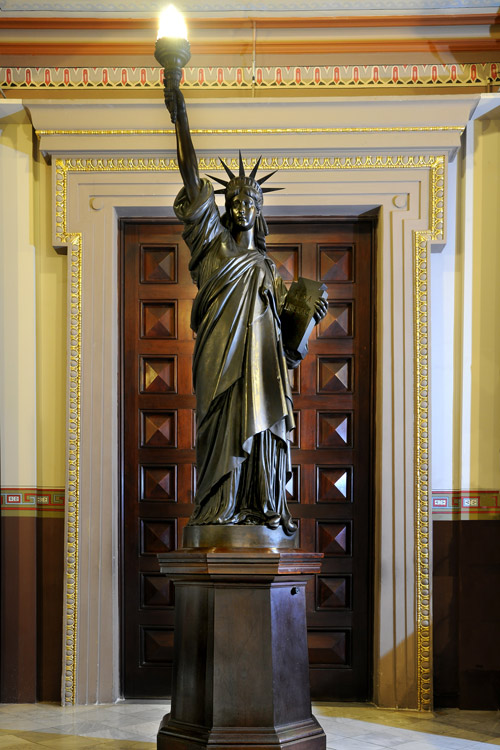 New York is usually a rather expensive destination and involves a long journey. Although it is certainly not the same as stepping into the Big Apple, in Barcelona they have a little piece of New York. We are talking about the replica of Barcelona’s Statue of Liberty that is hidden in the Arús Public Library. This “small” replica is two metres high and is located inside the library. With its more than 120 years, the careful detail with which the statue of the Liberty of Barcelona was built is striking. To see the statue you just have to visit the library, of course always keeping silence. 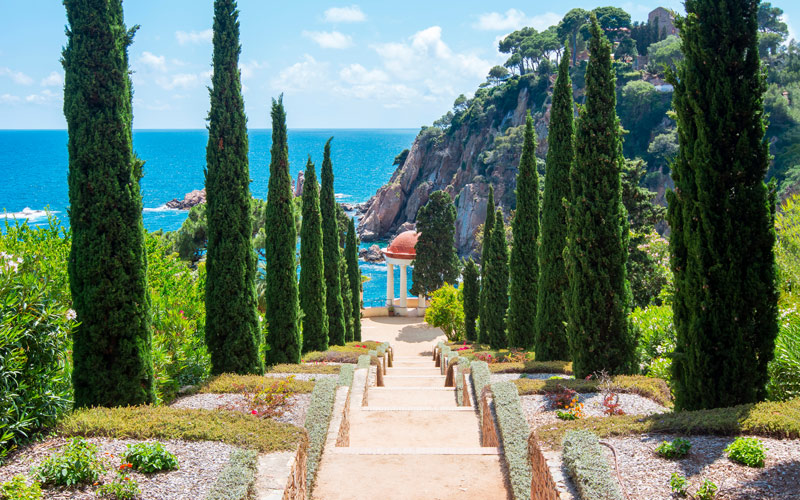 The Marimurtra Garden in Girona | Shutterstock

Marimurtra is one of the most fascinating corners of the Mediterranean. It is located in Blanes, Girona, although given its characteristics one does not know if one has suddenly travelled to the famous Greece. The botanical garden is arranged as a plant paradise divided into three areas: desert plants and high humidity, a subtropical area and a Mediterranean garden with sea views. When you walk through the place you cannot help but think that you are walking through Greece, a country in which you are inspired by creating structures like Linnaeus’ temple. From it you can see the beach of Sa Forcanera, one of the beaches that opens the Costa Brava.

Fragments of the Berlin Wall in the Berlin Park | Photo: Xauxa Håkan Svensson

It is possible to travel to the heart of Germany without leaving Madrid. Many people are unaware of the existence of the unique Berlin Park, where fragments of the Berlin Wall itself are on display. In this park in the Ciudad Jardín district in Chamartín, there are three fragments of the historic Berlin Wall. Original paintings are surprisingly intact thanks to a special coating. The city council acquired these valuable pieces in 1990 for the amount of nine million of the old pesetas. The whole park is a reference to the German capital, as its name suggests. In the Berlin park you can also see a sculpture of a bear, an unmistakable symbol of this city, as well as a monument to the musician Beethoven.

Dolmen of Guadalperal in Cáceres – England 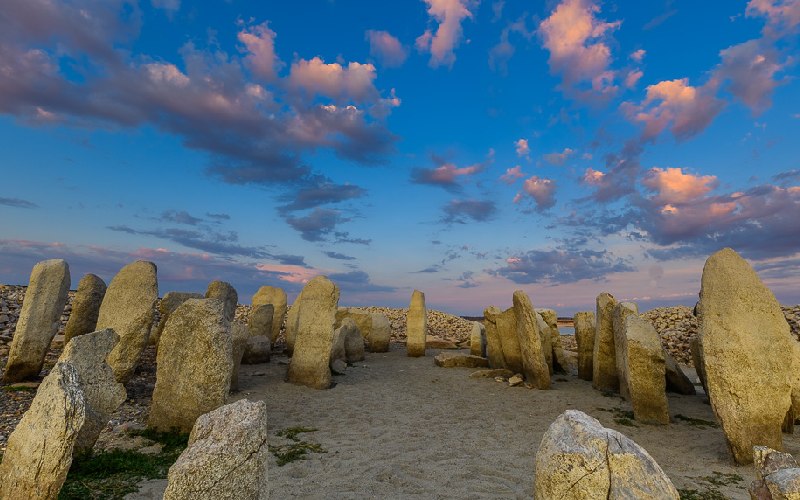 It is true that this is not a foreign monument, but its similarity to the Stonehenge in England makes one believe that it is suddenly in the county of Wiltshire. However, to see these spectacular megalithic figures you only have to travel to Cáceres to see the Guadalperal dolmen at the Valdecañas reservoir. The curious thing is that you can only see it when there is a drought; as these large stones are found inside a marsh. A set of 140 stones and more than 4,000 years old that only sees the light of the Sun in a seasonal way. For the lovers of these monuments, it is perhaps interesting to know that something to the south, in the province of Badajoz, you can also see a construction of these characteristics, the dolmen of Lácara. 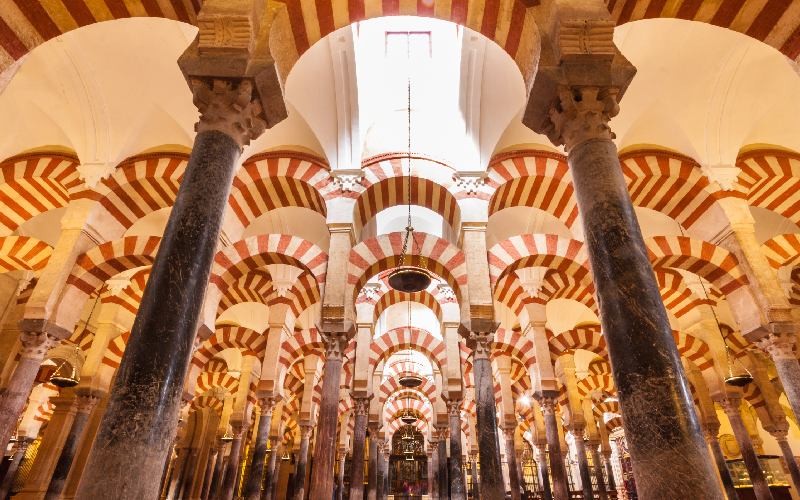 One of the first places that is usually associated with Arab monuments and temples is Cordoba, which is not surprising, as there are many places that survive to this day and date back to the Muslim era. The Mosque-Cathedral of Cordoba is one of the most visited monuments in Spain, built as a mosque in 786. During the Emirate and Caliphate of Cordoba, extensions were made to the building; making it the second largest in the world in terms of surface area. Although it was renamed a cathedral after the Reconquest; it is currently one of the country’s finest examples of Hispano-Muslim art. It has been declared a World Cultural Heritage site.

And suddenly, the landscape becomes the Grand Canyon of the Colorado in Arizona. But the reality is that you do not have to travel all the way to the United States to find what is popularly called the “Grand Canyon of Toledo“. These are the Barrancas de Burujón, also known as the Barrancas de Castrejón and Calaña. This Natural Monument is actually a sedimentary formation from the incision of the course of the River Tagus; which has created curious shapes of gullies and gorges. Declared a Special Protection Area for Birds, it is a perfect option for a small trip. The terrain has simple paths to reach the magnificent panoramic views presented by the ravines.

A small piece of Russia is in Alicante, the first temple that the Russian Orthodox Church carried out in Spain. It is the temple of the Archangel Michael, located in Altea. For the construction of this original temple in 2002, materials and, curiously enough, Russian labour were used. It is really like travelling to this great country; as it is a replica of a Russian Orthodox church dating from the 17th century. Its architecture is notable for its gold-coloured puffed vaults and mosaics, which imitate the aesthetics of Byzantine icons.

Temple of Debod in Madrid – Egypt 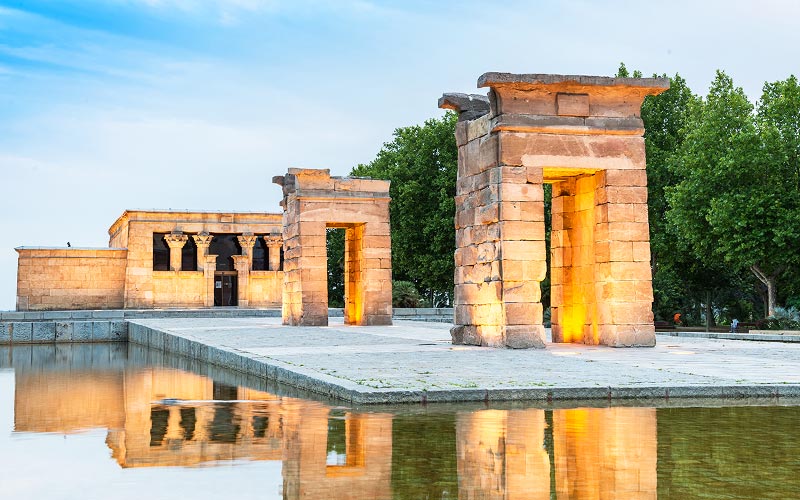 To contemplate the greatness of ancient Egypt, you only have to go as far as the Cuartel de la Montaña Park in Madrid. This is the Temple of Debod, located near Plaza de España. Known for being one of the most beautiful places to see the sunset in the capital; this Egyptian temple dates from the 2nd century BC. Its construction is the work of King Meroe Adijalamani, who dedicated the chapel to two gods: Isis and Amon. In the 20th century, to put an end to the abandonment of the building, the government of Egypt gave it to the city of Madrid. Once there, it was rebuilt stone by stone and opened to the public in 1972.

churches, natural environment, parks and gardens, World Heritage Site
It may interest you...