Not all of the coast are beaches. Along the thousands of kilometres of Spanish coastline there are also remarkable fishing villages. Places where the sea has been feeding most of them for a long time. Whether through fishing, shipyards or port trade, these environments have already prospered. Today they mix their tradition based on the sea with tourism. Perfect places to discover during a summer break. 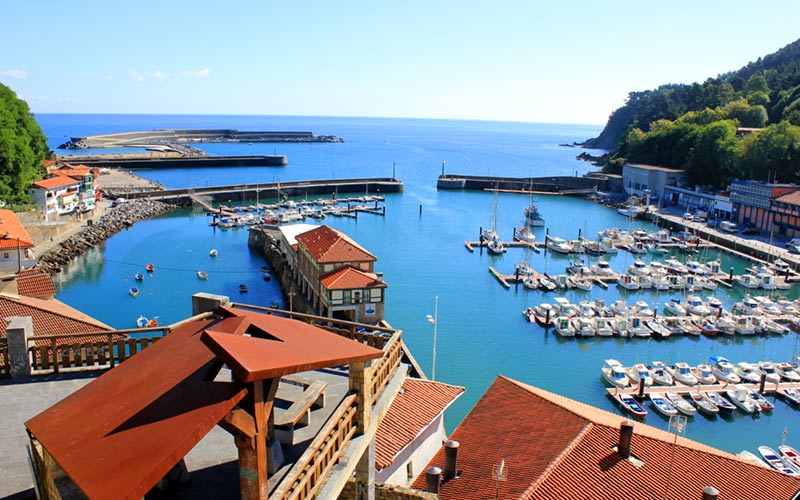 Between Deba and Ondarroa is this small fishing village. Its bay is home to an active port which is protected by the Mutriku buildings above. This vertical factor is provided by Mount Arno, the main mountain in the area. Thanks to this, there is a recognisable contrast between the mountains and the sea that characterises the Cantabrian Sea. Although there are still a few fishing boats, an activity that was the centre of the local economy in the past, tourism and small industry are the current driving forces of the population.

Its marine connection, as well as in the charming port, is clear through two cultural spaces. These are the Nautilus and Bentalekua museums. The first one is about the black flysch of Mutriku, an interesting geological formation. Meanwhile, the second one is located in the fish market and explains how the fishing that sustained the town for centuries was. Churches, palaces and an excellent gastronomy complete the attractions of this place in Guipúzcoa. 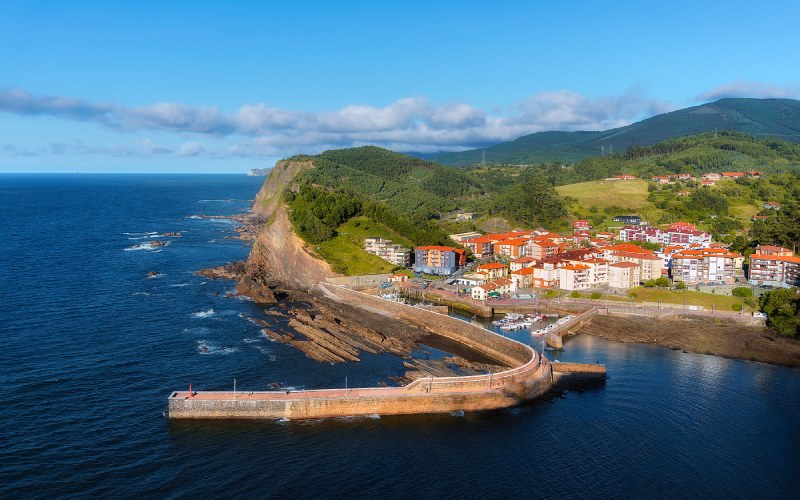 Although it has always been a small district of the municipality of Lemóniz, Armintza has been gaining ground over the rest of the towns in the territory thanks to the great setting in which it stands. Its origin dates back to the Middle Ages as a fishing village and a resting cove for small vessels. However, with the rise of tourism during the 20th and 21st centuries, it has developed a more touristic aspect. In spite of this, this village in Biscay continues to be a peaceful place with a strong connection to the sea. Close to Bilbao and the A-8, it is also well connected. 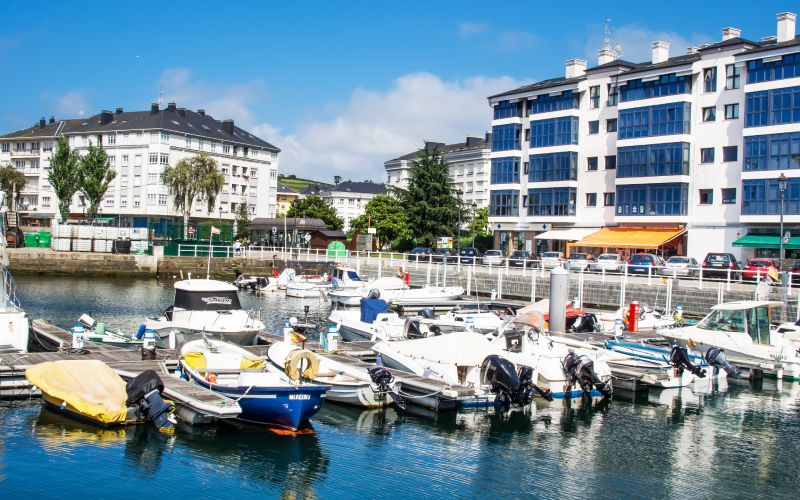 Located in the estuary where the river that gives it its name and the Cantabrian Sea meet, this Asturian town still has a source of livelihood in the sea. For example, the shipyards still play a crucial role here. To this is added a powerful industry and livestock sector. Fishing has declined considerably in recent years, although it is still present in the council. It is part of the Northern Way to Santiago de Compostela, so its bridge over the estuary is one of its best known elements. It also has interesting beaches and is close to landmarks such as Luarca, Cudillero or La Regalina. 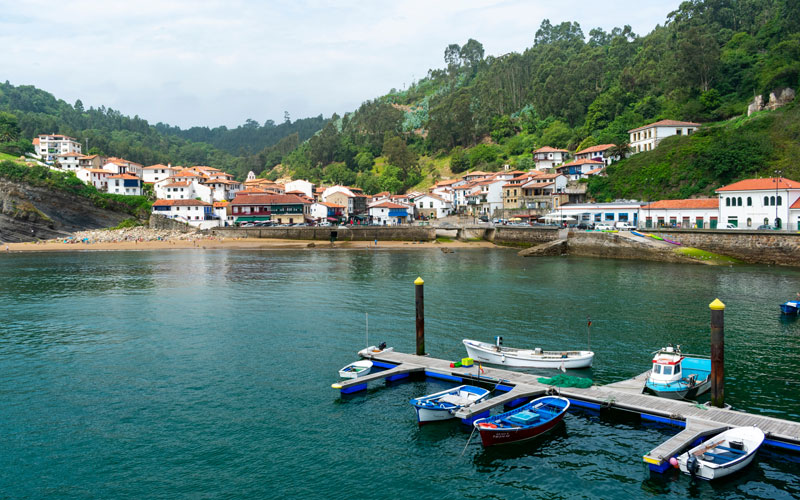 The council of Villaviciosa is known for its cider, being a Jacobean passage and churches. In addition, one of its historical highlights occurred when the still infant Charles V first landed in Spain. He did so through Tazones, a fishing village that still has great charm. In perfect harmony with the sea, it is an ideal fishing enclave to taste the fruits of the Cantabrian Sea. It also has a number of attractions that are not to be underestimated: dinosaur footprints, a house made of shells and a beautiful lighthouse.

O Porto do Barqueiro, A Coruña 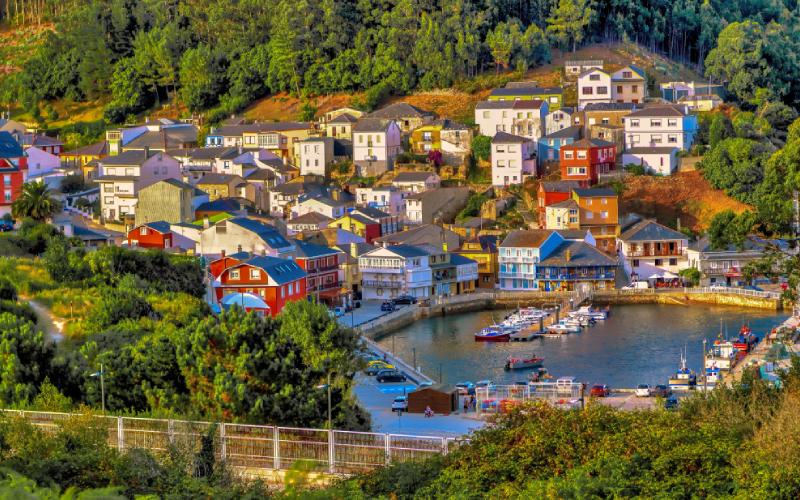 Estaca de Bares is the geographical point usually used to delimit the Atlantic and the Cantabrian Sea. On the eastern side of the cape, inserted in an estuary, O Barqueiro appears as a tiny village that nevertheless capitalises on its concello, Mañón, the most northern in Spain. The town shares its name with the small estuary where it is located. It was precisely the traditional need to cross by boat that generated the name.

Its river, the Sor, is home to salmon during the corresponding seasons. The sea birds, in their migratory movements, also stop in the vicinity of O Barqueiro. Beaches and hiking trails increase the potential of any trip to the place. However, the shape of the port, with the houses around it, is the most remarkable postcard. 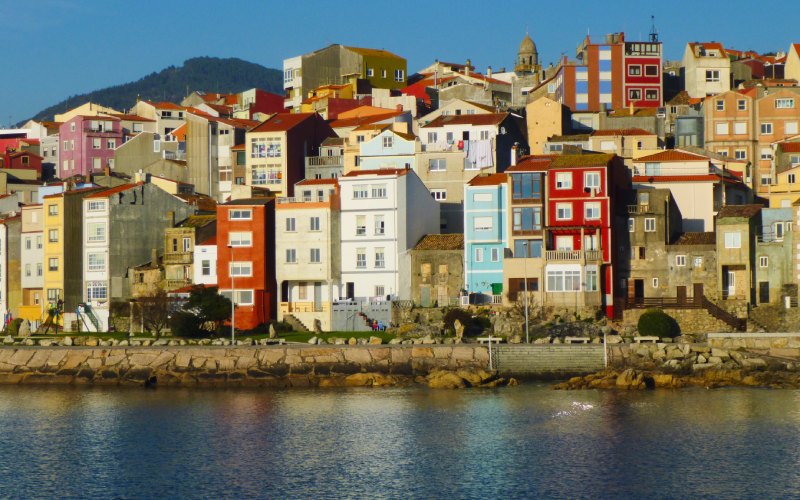 A Guarda in Pontevedra. | Shutterstock

One of the largest towns in this review, A Guarda awaits in the middle of the Portuguese border, looking out over the Atlantic and next to the mouth of the Miño. In fact, a ferry is still one of the ways to cross from one side of the river to the other. Fishing is still very much alive and is reflected in the architecture. Thanks to this, the quality of its fish and seafood is exceptional. Thus, the fishing port is the main reference of the town, next to the promenade.

As far as heritage is concerned, this is a very interesting town and council of Pontevedra. The church of Santa María de la Asunción and the hermitage of Santa Trega are the best religious landmarks. Next to the latter is an archaeological treasure, the castro of Santa Trega, which was once home to thousands of people at the change of era. Several museums, such as the one attached to the site or the sea museum, complete the attractions of A Guardia. Finally, it is worth mentioning that it is part of the Portuguese Way to Santiago de la Costa. 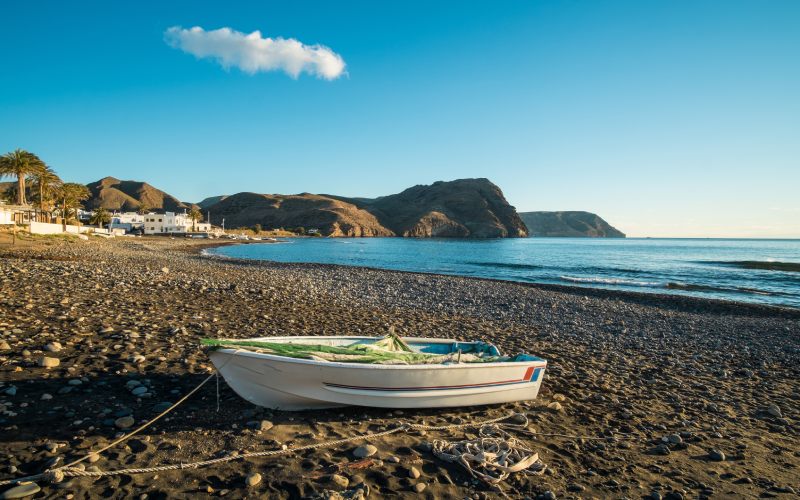 Even if you do not see a port as such, the boats on the beaches indicate the origin of Las Negras. This determines to a great extent the local gastronomic offer. Around the small town rise volcanic mountains that give a great sense of isolation. Something that, together with the grateful Mediterranean climate, has caused that more than half of the population is foreign.

In any case, the trip to the place allows to know interesting corners. For example, the cove of San Pedro, where a small group of houses in the form of a hippie commune thrives next to the remains of a fortress that was reused by the Guardia Civil. A similar case to the nearby San José, also in Almería. A set of fossilized dunes complements the cut-off coast of this part of the Cabo de Gata-Níjar Natural Park. Thus, hiking is another very recurrent activity in a trip to Las Negras, in addition to marine sports. 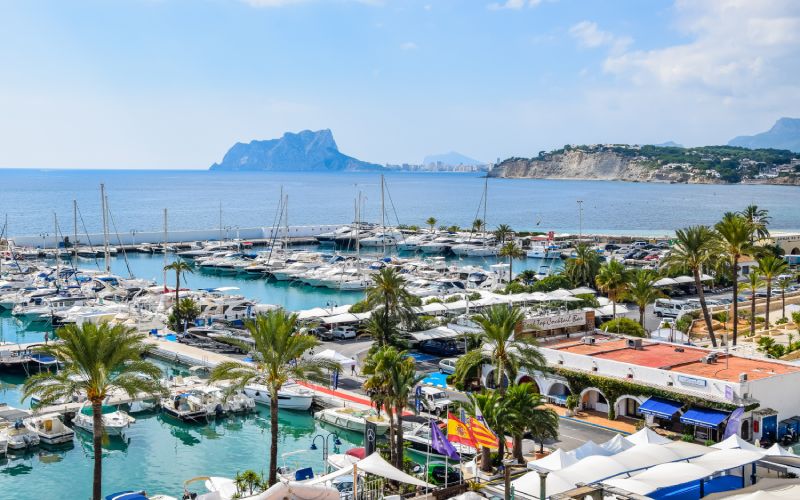 Part of the municipality of Teulada, Moraira is less well known than neighbouring towns such as Denia, Javea or Calpe. A small fort from 1744, which like the watchtowers of Cádiz, Málaga or Granada served to protect the place from Berber attacks, allowed a village to be created. The end of the piracy in the 19th century meant the consolidation of the same. Beyond fishing, the security of its coast allowed it to be used for storing and loading raisins.

The location that made it safe, next to typical mountains of this area of Alicante, also served to become a first class tourist environment in the 20th century. A conversion that has improved its port and infrastructure. However, it has not lost the atmosphere between sailor and farmer that characterized the primitive Moraira. 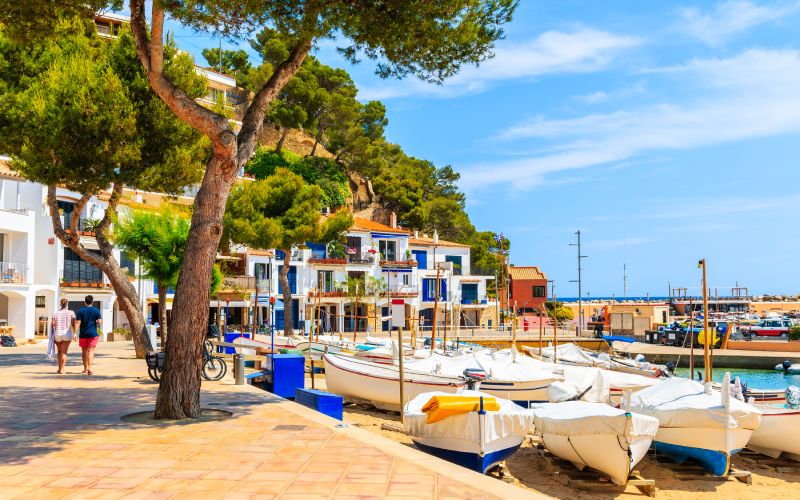 The Costa Brava is a place where it is difficult to avoid overcrowding. Llafranc achieves this in part. This nucleus of Palafrugell is located in a small bay with a beautiful beach, marina included. During the second half of the 20th century it experienced the same tourist explosion as its neighbours, but it kept a good part of the houses and historicist buildings built decades ago. Thanks to this, despite the fact that in summer it tends to be saturated, it keeps its somewhat old atmosphere.

From Llafranc’s recent past, the so-called “gypsy of the Costa Brava”, Manuel Bisbe, is well known. Together with his brothers he opened the hotel Llafranc. His peculiar personality led him to become friends with Dalí or to hang out with Hollywood and flamenco stars. Millennia before, the Roman wine industry had developed in the area, as evidenced by a press made from rescued grapes. An Iberian settlement, a dolmen and a 19th century lighthouse make up some very interesting routes. 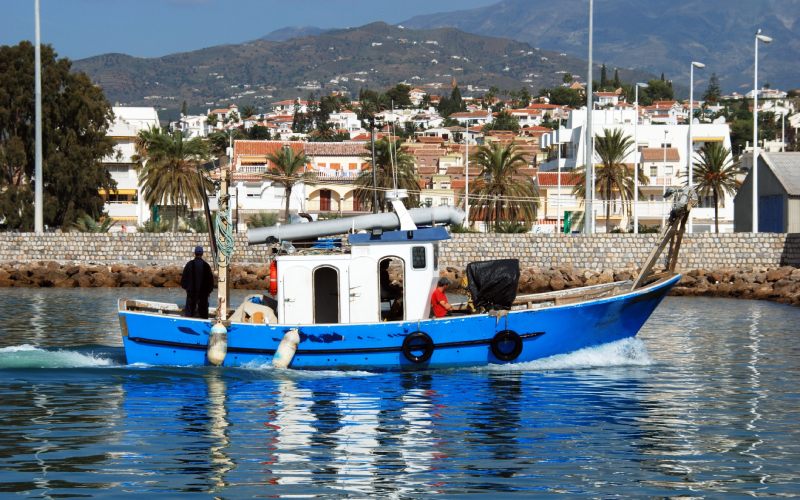 Something similar to Moraira and Llafranc happens in this fishing village. They are all in areas of enormous tourist pressure but have managed to safeguard their essence. In fact, the fishing character of this nucleus of Vélez-Málaga has only increased in recent years. Thus, its port is one of the most important for this activity on the Costa del Sol. Thanks to this, you can eat excellent espetos or pescaíto frito.

It was formerly known as Pago de Trayamar, in reference to its proximity to the Algarrobo River and an ancient Phoenician necropolis. Despite maintaining its traditional seafaring way of life, it is also a place with a great tourist aspect. From sports sailing to the sun and beach, it is an ideal place to get away in summer. Likewise, the A-7 connects La Caleta de Vélez with the immediate Torre del Mar, the provincial capital, or more crowded areas such as Marbella or Torremolinos. 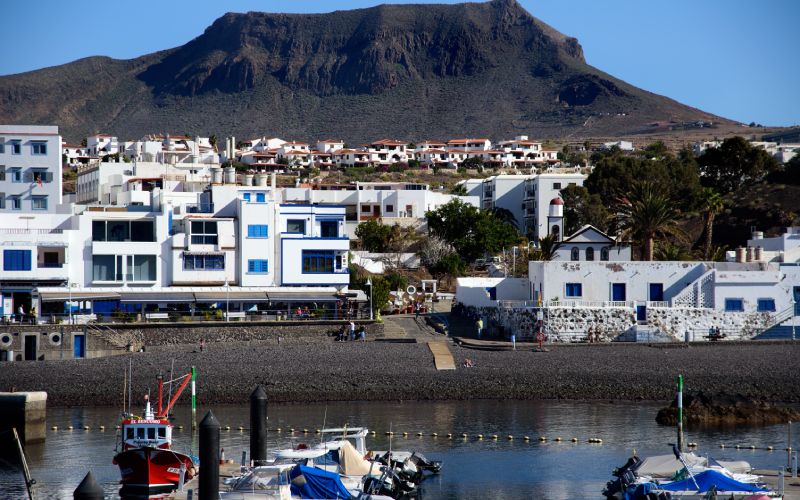 The port of this Canarian town was key in the conquest of the island of Gran Canaria by Castile. Known as the port of Las Nieves, it was a landing point that allowed the creation of a strong point and a reference point. Over time, fishing became the main activity of the town, so that today it still has a fishermen’s guild. Its historical value, which covers the entire history of the island, is complemented by a rugged, beautiful and white environment.

Ortiguera, the Asturian village with 1,000 inhabitants but two lighthouses
Ortiguera is a beautiful village on the coast of Asturias belonging to the municipality of Más información

Estepona, the Garden of Costa del Sol
[vc_row][vc_column][vc_column_text]Estepona is surprising for the variety of activities and landscapes offered by this municipality of Más información