Mining made Hispania a priority territory for Rome. This can be seen in environments such as Las Médulas. Then came the Arabs, the Christian kingdoms and Spain itself. But it was foreigners who once again revolutionised the Spanish mines and its iron and steel industry. English traders made territories like Asturias, Malaga, Biscay or Huelva thriving areas of extraction and refinement of minerals. The most representative case is the area around the River Tinto, with the Minas de Riotinto at its head. In its vicinity, a series of pits and galleries are deployed, which in some cases still define the Mining Region of Huelva. 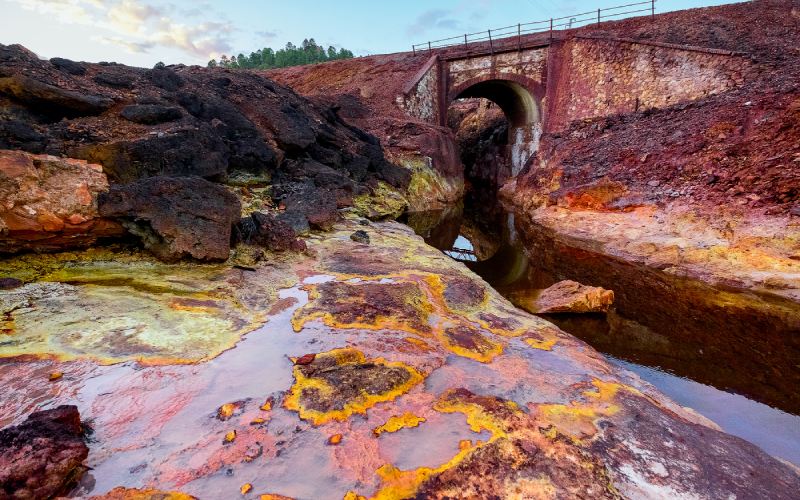 Course of the River Tinto. | Shutterstock

A Martian river with the colour of wine

The great concentration of minerals in the surroundings of the Huelva waterway, in the foothills of the Sierra Morena, causes it to be saturated with chemical components. These give it a characteristic reddish colour. Also conditions that make it a hell for most of life. In fact, it is difficult to see even birds nearby. It is very acidic, with a ph that reaches 1.7, lower for example than that of a lemon. Normal water has a pH of seven. This is the result of the action of the abundant sulphur. At the same time, it has heavy metals of all kinds in suspension, from iron to copper and manganese. 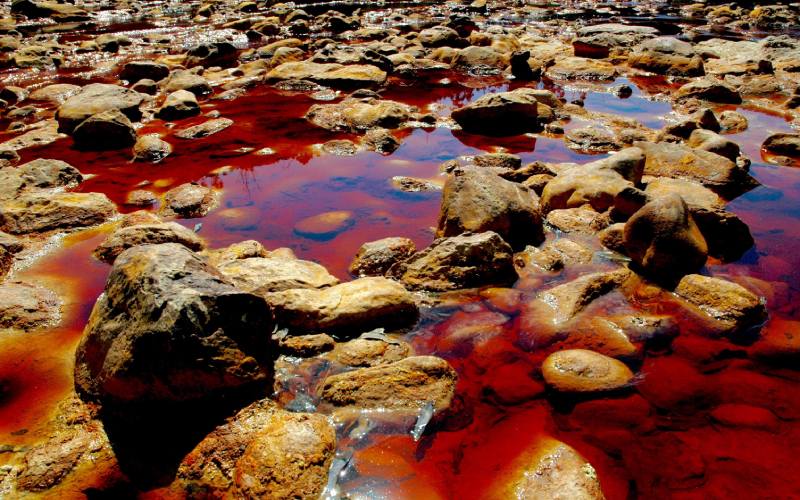 Waters of the Rio Tinto. | Shutterstock

This cocktail is toxic to almost any creature, yet it is the perfect place for exotic microorganisms to thrive. They are mostly single-celled. Bacteria, algae and fungi have been studied by various entities including NASA. It was foreseeable that there would be extremophilic bacteria, which withstand environments with characteristics as difficult as those of the Tinto River. Among them stand out those that feed on minerals and metals.

It is more surprising to find cells with nuclei, so-called eukaryotes. Their existence proves that their resistance in borderline environments is far greater than previously thought. Because of this, NASA has extended its expectations of finding life on Mars. The environment of the red planet has been compared on multiple occasions to the river Tinto. Thus, the large existing cell colony is a biological jewel with a multitude of endemic species. In fact, it is the sediments that give the dark ochre color. The water itself is usually green to blackish due to local life.

It is not until the end of the river, at the height of Moguer and Palos, that its waters stop being red. The mixing of the waters with those of the Atlantic marks a change in the ecosystem that prevails for about 80 kilometers. A gentle descent to the sea that passes through places like Niebla. 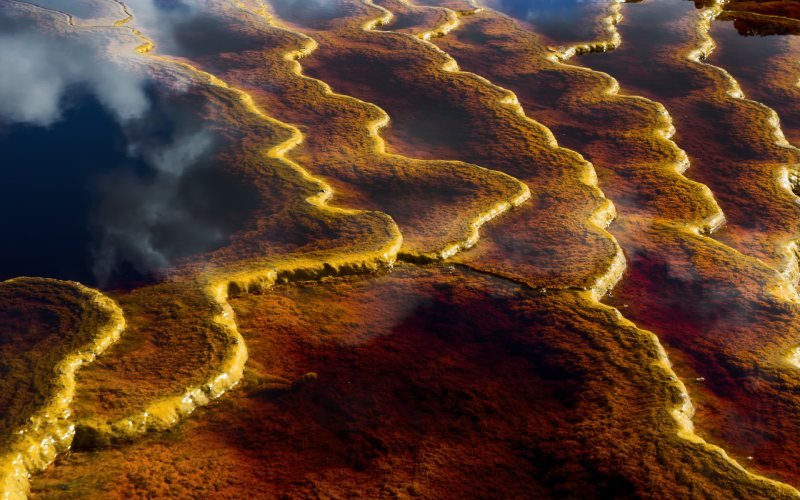 Formations of the River Tinto. | Shutterstock

The millenary industrial exploitation of Riotinto

Although it is the regional centre, Minas de Riotinto, the most popular population, the mineral industry covers an entire region of Huelva, the Comarca Minera. Nevertheless, the Riotinto area is home to the most notable marks left by mining in the province within a few kilometres. A simple glance at the satellite view is enough to get an idea of the magnitude of the exploitation. However, the vestiges seen on the surface are mostly modern. This does not mean that the area was not excavated thousands of years ago. 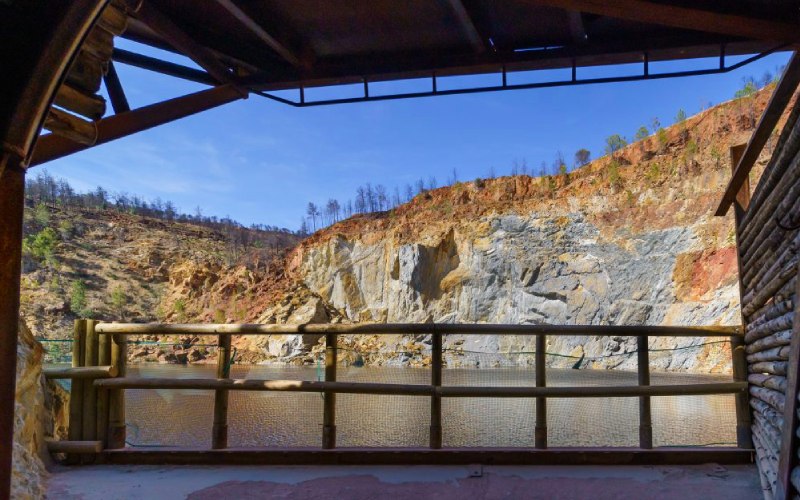 Arcoíris Mine in the Peña de Hierro. | Riotinto Mining Complex

The indigenous peoples of the peninsula in Greek and Phoenician times had a mining focus in and around El Tinto. Associated with the legendary Tartessos, whose cities are still lost, the silver extracted in Riotinto reached the eastern Mediterranean. From before, the abundant copper helped to develop the era of the same name. Therefore, already in the Chalcolithic period the place was famous for its abundance of minerals.

However, as is often the case, it was the Romans who raised the level. The second war against Carthage, which led to Hannibal crossing the Alps with elephants, brought Rome to what is now Andalusia. The local cultures that supported the Punics gave in to the Republican thrust. Furthermore, the commercial colonies were well related to Scipio the African, a general who won the war and was very favourable to the Greeks. Thus, for example, Italica, near Seville, was founded. 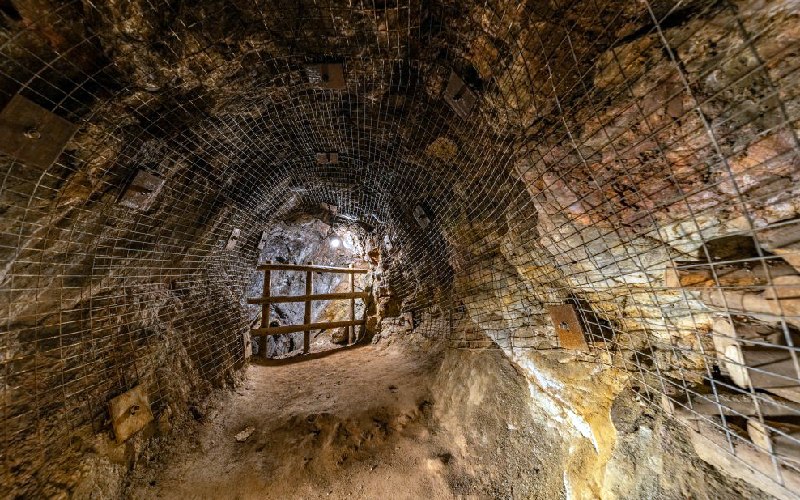 With the passing of the centuries the empire would eventually rise and fall. About seven centuries in which some 20 million tons of waste materials were generated, according to the Riotinto Foundation. Copper, iron, silver or gold made it one of the most productive places in Roman mining. For example, as a result of metallurgical work, lead from Riotinto minerals has been found in Greenland’s glaciers. The local village was called Urium and several galleries have been discovered in the last century and this one.

The late Roman and early medieval periods continued to take advantage of the richness of the River Tinto and its surroundings. The Arabs completed this first stage in the 13th century, when they lost the place. This was followed by a long period of inactivity despite attempts at reopening led by Philip II.

The English revival of Riotinto

During the 18th century it was extracted again. Foreign influence was decisive from the beginning. For example, in the first quarter of that century it was a Swede, Liberto Wolters, who led the extraction project. Different employers would eventually make the mine profitable. Industrialization would further encourage this after the difficult years of the War of Independence. Thus, there was a before and after in 1873. That was when the creation of the Rio Tinto Company Limited was completed. 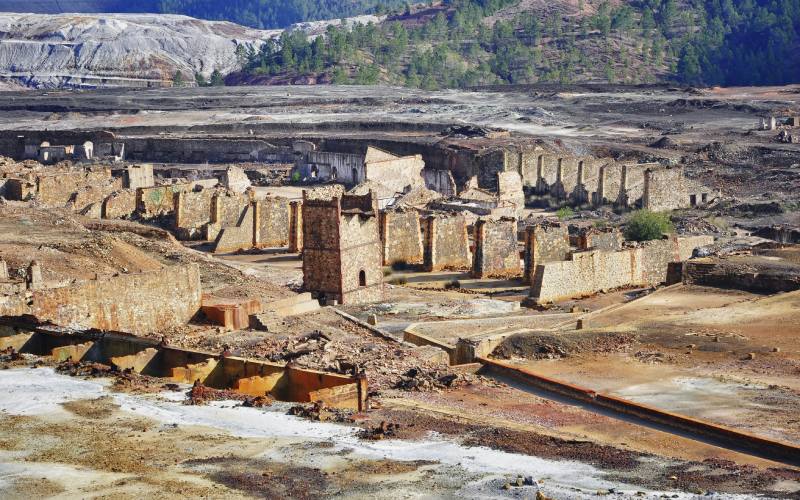 Remains of the English mining complex at Riotinto. | Shutterstock

There had already been attempts at privatization in the early 19th century. However, this meant leaving one of the great copper producing areas that existed at the time in foreign hands. Phyllis such as San Dionisio or El Sur were exploited in a spectacular way that would change the landscape forever. The “cortas” or opencast mines abounded and marked the map. Corta Atalaya was the most notable. If in Tharsis, in the Andévalo, the mining company of the same name extracted pyrite to obtain sulphuric acid, here copper was the king. There was also no shortage of gold, silver, lead and zinc.

In the more than 80 years of the Rio Tinto Company Limited, millions of tons of material were extracted. In addition, the town now called Minas de Riotinto was formed and the English quarter of Bellavista was founded. The company’s influence extended to places like Valverde del Camino or the provincial capital. The English brought the railway, today derived in greenways, and the latest construction techniques to the region, so that they were the most important copper extractor on the planet. There were also moments of chaos and repression, such as when in 1888 he massacred between 45 and 300 workers during demonstrations against the company’s abuses. It was the “year of the shots”. 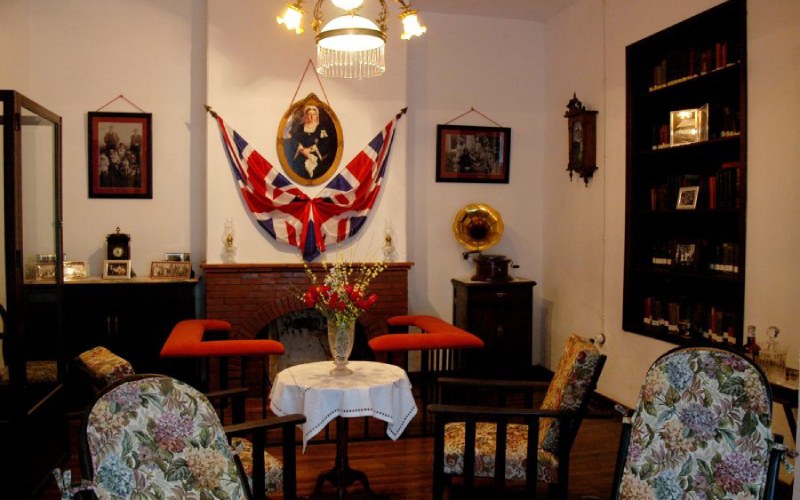 Among other more positive side effects is the birth of Spanish football. This happened in Minas de Riotinto thanks to the English colony installed there. A fact that is remembered in the place as much as the mining spirit. The Rio Tinto Foot-ball Club preceded Recreativo de Huelva by eleven years, when it was born during 1878. It evolved over decades as more teams emerged in the town. There were as many as 20 at the beginning of the 20th century. Also, some of the players from Spain’s first football club were known internationally. For example, the town council notes that Charles Robert Julian became an Olympian. 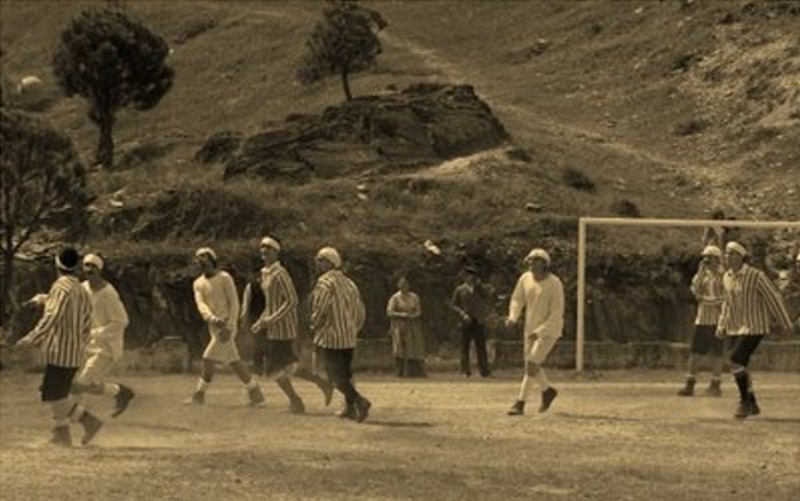 In addition, the Rio Tinto Company Limited was also crucial in the creation of the “scouts”. These youth institutions had their Spanish pioneers in the High Patronage of Scouts in Minas de Riotinto. Founded in 1924, it wanted to capture the exploratory and patriotic vision that characterizes the movement in young people from the places associated with the company. Like everything else, this stage ended. It was in 1954, when two thirds of the company was nationalized.

You cannot overlook the biggest gap generated in Riotinto. The spectacular Corta Atalaya. This immense elliptical cone is an artificial chasm 350 meters deep. Such a bottom is usually covered with water. It extends more than one kilometer long and almost another kilometer wide. It is one of the largest opencast mines on the planet and was once a landmark. The result of large blasting, it emerged shortly after the English appeared. In this way it joins other huge Spanish complexes such as Almadén. 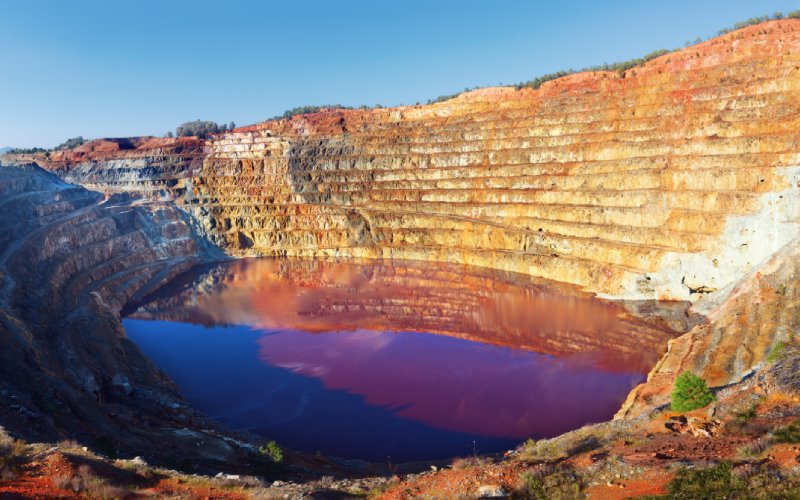 A village that was at first very poor gave way to a larger one. The Mina, as it was called, was consumed by the enlargement of the corta and the Minas de Riotinto emerged, which has come to this day. In use until the mid-1990s, the Corta Atalaya was for a time a popular place. With impressive views, the closure of activities in 2001 led to a ban on visits. Luckily they have now been reactivated under the direction of the town council. 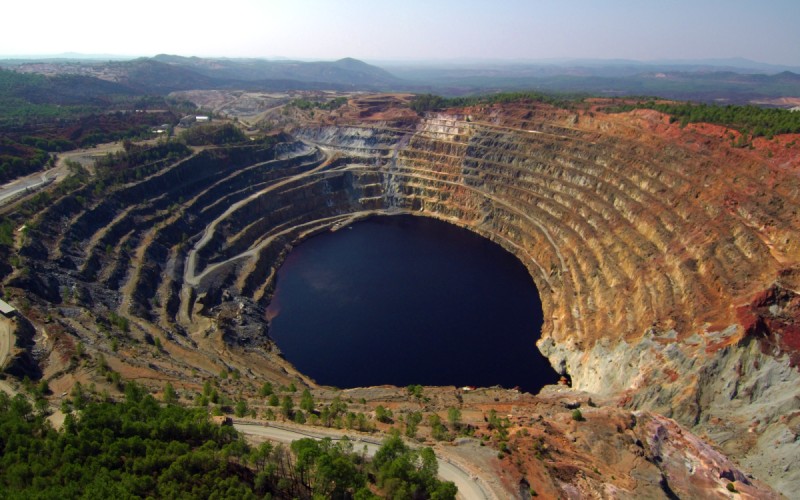 In the high near the short on Minas de Riotinto is located the district of Bellavista. This is an excellent example of the English quarters that were developed by English businessmen in so many places, not to mention Malaga. A Victorian complex that was used by the company’s managers. In this way they were segmented from the Spanish workers and could be kept in a space similar to that of Great Britain. Very well preserved, it is worth a walk. 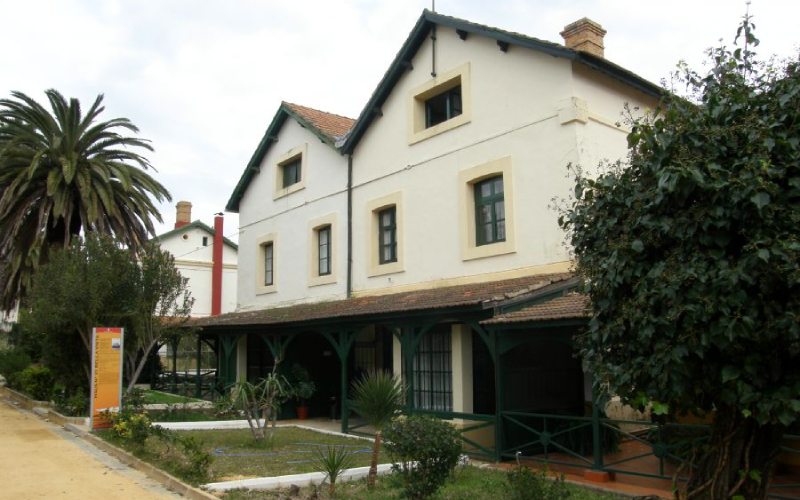 The last decades of Riotinto, mining and tourism

After several readjustments of the company in charge, everything went well until the 1980s. Then a crisis affected the mining business, destroying practically all possible competitiveness. With the price of metal at rock bottom, the activity declined until 1995 when the exploitation passed into the hands of the workers. This happened as a result of a curious pact in which the company sold the shares for one peseta. Despite the efforts, in 2001 the machinery was shut down.

During this forced impasse Minas de Riotinto was forced to change. Since 1987, the Riotinto Foundation has been responsible for much of the museumization of the area through the Riotinto Mining Park. For example, the excellent Ernest Lluch mining museum dates from 1992. In addition, old galleries have been fitted out to allow visits to the Peña de Hierro, near Nerva. This has remains from Rome to the English and national stage. The guided tour is combined with the high stretch of the river Tinto itself. The most striking way to do it is by means of a restored diesel train, although for a few months a year a steam train also operates. 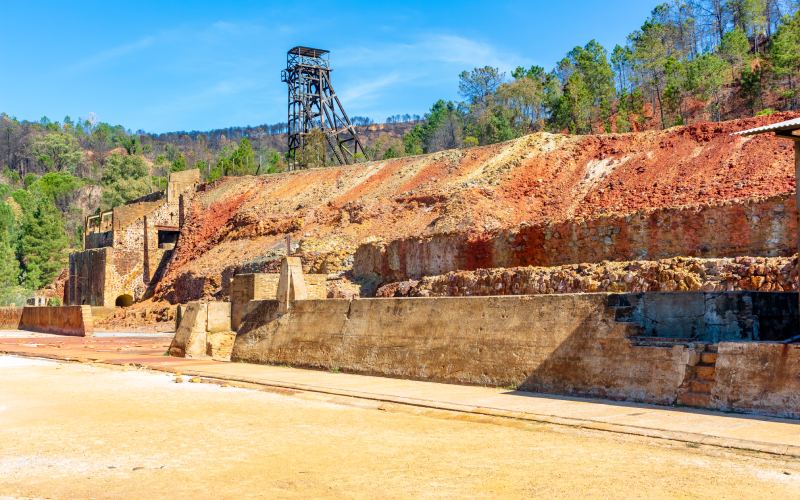 Industrial activity returned in 2015 thanks to a company from Cyprus. Atalaya Mining took advantage of the upturn in copper and other metals to develop a major project on Cerro Colorado. The project exploits several seams and is at least 17 years old. Some ten million tons of ore are extracted each year. 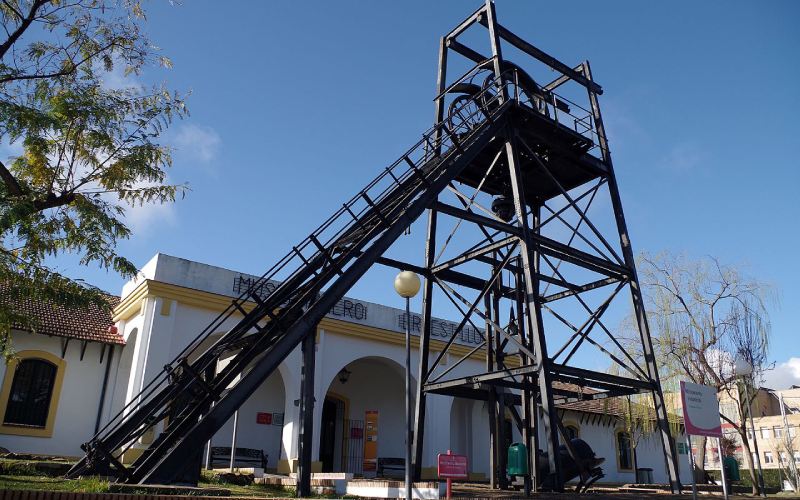 The place has gained another front in the form of the Southern Way to Santiago. It goes from Huelva to Zafra, passing through Riotinto, Aracena and the mountain range of the same name. Then it connects with the Vía de la Plata. Pilgrims travel along the same road as the heavy mining traffic, which is not without danger. Be that as it may, the proximity of capitals such as Seville, Huelva or Cadiz adds to the fact that not far away there are magnificent corners such as the Gruta de las Maravillas to enhance the place as a tourist destination.