When summer arrives, the desire to take a dip increases. Well known are the coastal areas, however, somewhat more unknown are the natural pools of the peninsula. Thus, it is worth mentioning the pools of the Sierra de Gredos, which has dreamy hidden places that, no doubt, will not leave anyone indifferent.

Choosing the most spectacular pools and bathing areas of the Sierra de Gredos is a real challenge, because there are hidden gems in amazing natural places. This is a tour of the most outstanding places to disconnect and escape the heat. 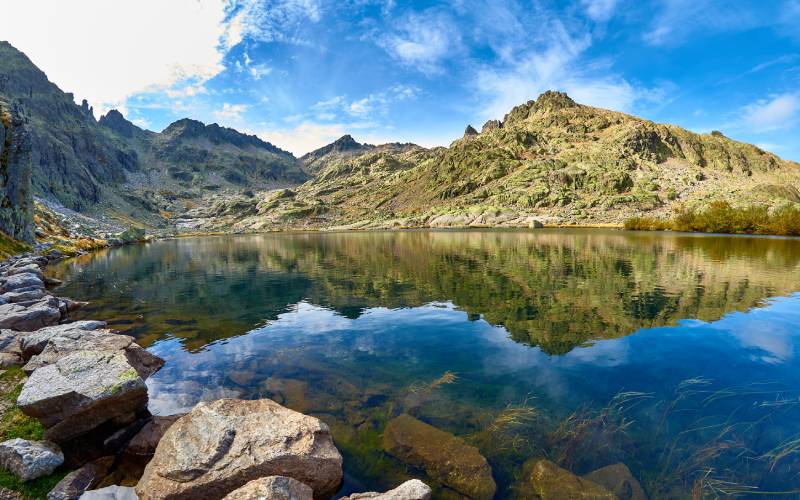 The Sierra de Gredos is one of the biggest of the Central System, extending over Toledo, Madrid, Ávila, Cáceres and Salamanca. It is divided into two very distinct areas: the northern area, where the high mountains are the protagonist, and the southern area, full of green areas.

The northern zone is a paradise for high mountain lovers thanks to its routes. The most popular and busiest is the one that runs to the Plataforma and the Circo de Gredos. The landscape of this area is characterized by the granite stone, an emblem of Gredos. In addition, the Laguna de los Caballeros stands out, only accessible through a mountain route.

In the southern part of the Sierra de Gredos Park, the emblem is water, a key element that characterizes the landscape of the area. It is the perfect place to enjoy a dip in some of its many natural pools, even to practice some active tourism activity. The water is so clear that you can see the fish that inhabits its rivers, such as trout.

The Sierra de Gredos, especially in the southern area, is home to hidden pools that few know. Dreamlike and hidden places where nature remains intact. Some of the most special corners of the area are just an hour’s drive from Madrid.

El Charco Verde in the historic-artistic site of Guisando

On the southern slope of Gredos is El Charco Verde, where the Tiétar river, the mountains, black storks, mountain goats, eagles, oaks and tall pines, among a wide variety of flora and fauna. It is a beautiful bathing area in the surroundings of Guisando, a small village declared a historic-artistic site. To access the natural pool is necessary to cross the village and follow the road of the campsite one kilometer up.

The village also has a natural pool in the town center, called Carcho del Risquillo. The whole area is full of natural pools. In addition, there is a small waterfall and there is even the possibility of ascending the gorge of the Pelayos river to get to know the most private and less traveled area. Nature in its purest state. 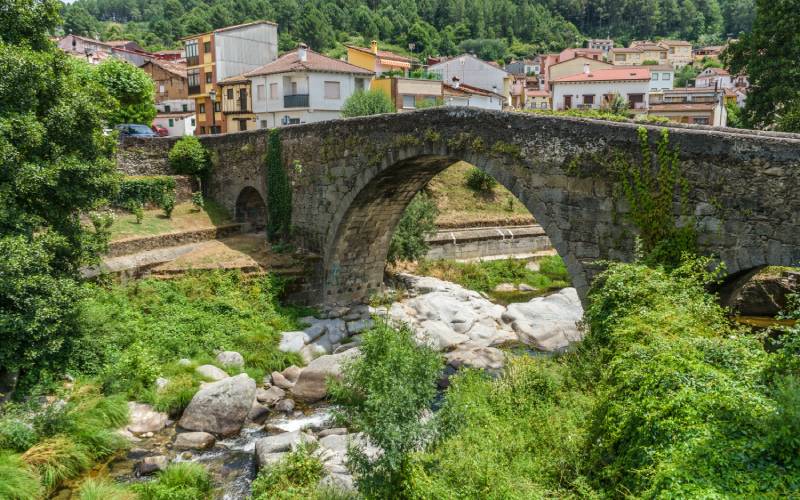 The village of Arenas de San Pedro, in Ávila. | Shutterstock

One of the best conditioned natural pools in the area is divided into two pools that are regulated by dams. In one area the water reaches up to the knee. This part is suitable for children, while in the other the depth is enough to swim comfortably. It has a diving board, stairs and even showers.

In addition, there is a green area next to the natural pool to enjoy lying down in the sun. There is also a parking lot, some beach bars and a picnic area. With so many amenities, it is sometimes possible to forget that you are in the middle of nature. However, during the bath, the trout in the river are in charge of reminding it to you.

The crystalline waters of the natural pool of El Raso

To the northeast of Candeleda is the recreational area of los Riveros, one of the most popular areas of Ávila because of its natural pool. Its crystalline waters flow forming different pools and ponds. You can even access a small beach area with easy access. It has all kinds of amenities, from parking, restaurant or barbecues to picnic areas and fountains.

Just two hours from Madrid is the place of La Garganta de Valdecasas, which belongs to Naverredonda de Gredos. It is a village known for being one of the entrances to the Platform of Gredos, the starting point of hiking trails, horseback riding routes and many other active tourism activities.

It is possible to visit it throughout the year, but in spring and summer visitors can enjoy its best kept secret: its pools. The water comes from the peaks of Gredos, therefore, it is suitable for the bravest as it is always cold.

It is also a hidden natural place. The pools are on a granite formation that creates amazing waterfalls. All the way to the Plataforma de Gredos it is possible to enjoy bathing areas next to rocks eroded by time. 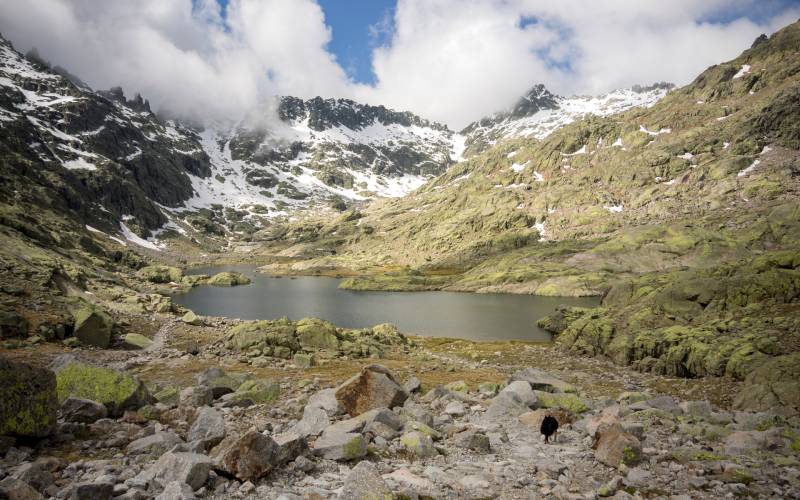 The forbidden jumps in the Cuartos Gorge

The Cuartos Gorge is part of the Natura 2000 Network thanks to its natural enclave with a characteristic flora and fauna. Easily recognizable by its medieval bridge, located on the outskirts of Losar de la Vera, has areas that cover little, but especially noted for its deep areas. There are many brave people who jump from some of the rocks on its shore, even from the bridge, although in fact it is strictly forbidden.

In a unique place, not only for its nature, but for being located next to an ancient Roman road, this pool stands out for its areas to jump into the natural pool, a perfect place to escape the summer heat. Pets can even be brought along. On the way to the pool, there are many wooden signs informing about the flora of the place.

El Vitillo, only suitable for the brave ones

This natural pool is suitable for the bravest due to its icy waters. Located in a natural charming environment, on one side of the pool there is a very popular beach bar for its local tapas, especially the ‘patatas revolconas’ and ‘migas’. The access to reach it is simple: passing Villarejo in the direction of San Esteban del Valle, it is on the right side of the road.

Nestled near the Horcajo Dam, which offers spectacular views of the Nuño Cojo Gorge, is the popular Charca de la Nieta. The natural pool of Piedralaves is very deep thanks to the retaining wall that retains its cold waters. It is suitable for families, because a few meters above is the Charca de la Abuela, smaller, created for children. 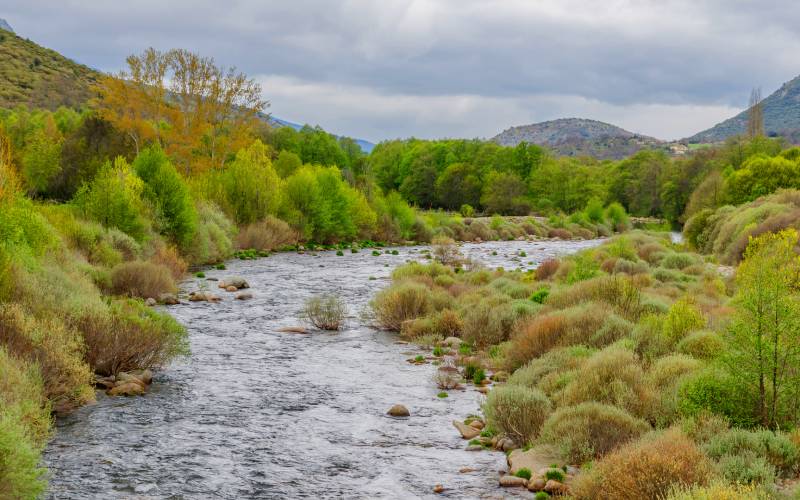 The Tormes River as it passes through Ávila. | Shutterstock

The Charzo de las Paredes, is one of the most charming places in the northern part of Gredos to take a good swim in its icy and transparent waters. It is located in the Pozo De las Paredes recreational area, near La Carrera, a quiet town in Ávila.

The Tormes River in this area is calm and allows to enjoy a bath without danger, perfect to go with the family. Its waters flow through the rocky walls of the place, and even has an ancient stone that crosses the area from shore to shore. In addition, the site has a beach bar, known for its tasty snacks and paellas, a barbecue area, stone tables and running water. What else could we ask for?