Dawn breaks in Zahara de la Sierra, in Cádiz. A slow dawn in a parenthesis of white houses between mountains. The sky is clear, illuminated by the rays of sunlight that touch the silhouette of the castle rising. A few white clouds are outlined between the fleeting reflections of the village on the mirror of the reserve.

Minutes are eternal on the horizon of the Sierra de Grazalema Natural Park. The melody of the Sierra del Jaral sounds of birds, of fluttering wings among pines and rockrose, of ancient notes of cultures that came and went. The land transpires all that has been experienced over the centuries. Conquests and reconquests settled on the slopes of a rocky mountain where the Mediterranean woodland is in all its splendour. Zahara de la Sierra is a natural viewpoint open to the blue air, to a past carved in narrow, staggered streets stained with centuries.

Surprises of a past

The past of Zahara de la Sierra is latent throughout its geography. It is possible to pronounce it in the syllables of its name. You can still contemplate it in the remains of the Muslim fortress that crowns the town. The history of this small white spot, immersed in the Sierra de Grazalema, is closely connected with the nature that surrounds it. Its border location made Zahara, in the past, a desired and disputed place. It became the protagonist of episodes of conquests and nocturnal surprises.

But before all this, before ancient chronicles, before Catholic Monarchs and Muslim monarchs, others inhabited Zahara de la Sierra. Proof of this are archaeological remains, such as the granite axes found in different areas. The Bocaleones stream, the Covatillas cave and the olive grove of Los Tardíos form the pieces of a puzzle that dates back to the Palaeolithic.

According to Plinio, Zahara de la Sierra was the ancient Lastigi, belonging to the Conventus Juridicus de Gades. The site of Tesorillo remains from the Roman period, very close to Arroyomolinos. Meanwhile, between substrates of rock, sand and time, remains of pottery emerge. The roar of a late Roman stone lion can be heard or the remains of a door that invites us to open into the past. In the same way, the bridges, the Antiguo or Palominos, invite you to cross over to that part of the history of the Sierra de Cádiz. On the old road to Olvera, on the Guadalete riverbed, bordering Algodonales, close to the Bocaleones stream, the other bank awaits.

Later, in Muslim hands, it became the scene of the meeting between King Alfonso X the Wise and Sultan Aben Yusef. In response to the king’s request for help to fight against the uprising of his son Sancho IV, the sultan summons him to this border town. Talking under the shade of a silk and gold shop, they agreed to give the Castilian monarch 60,000 gold doubloons. In exchange, the Sultan received cows to improve the Moroccan livestock. The castle was built as part of the Nasrid evolution in these lands. Parts of its walls are still standing. 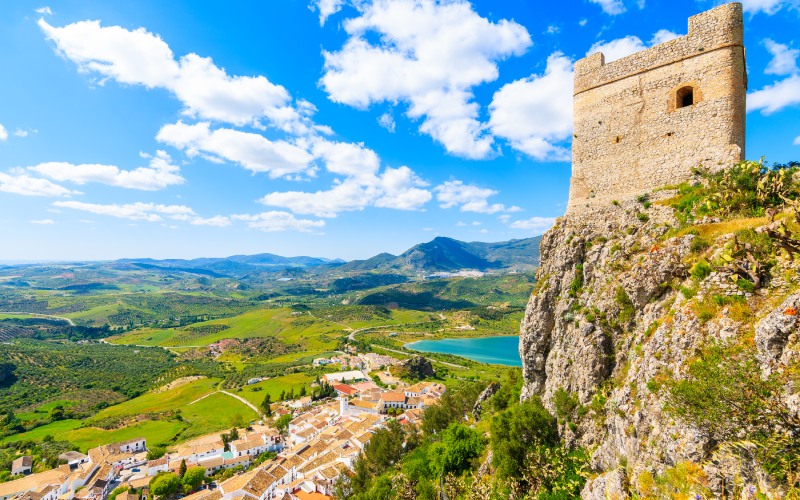 The 15th century began with the first Christian capture of Zahara de la Sierra. It was part of a military campaign led by Fernando I of Aragón, ‘the Antequera‘, who also recovered the lands of Torre Alháquime and Pruna. The Christian domination ended on the night of 28 December 1481, when the Muslims surprised the inhabitants of the town. This accelerated plans for the reconquest of Granada by the Catholic Monarchs. Two years later, Isabel and Fernando took the area back and included it in the lordship of ‘Ponce de León’. But the Muslim influence remained. Even now, to the south of the village, in the Loma del Calvario, the remains of a necropolis can still be seen.

These were turbulent times, during which its location turned it into a territory with a military and defensive aspect. In the 16th and 17th centuries, there was a transfer of population to the towns of Algodonares and El Gastor. But the construction of the church or the clock tower reflects the importance that Zahara maintained throughout those years. Today, a walk through its streets tells that there was an story for anyone who wants to hear it.

An after translated into churches and towers that rise above the houses, such as the 18th century church of Santa María de la Mesa. A sample of Andalusian religious architecture, in baroque style, and neoclassical influences. It is worth going through the entrance and touring its Latin cross floor plan, where the choir stands out. The interior should not be left behind without first contemplating the main chapel, which houses an altarpiece of the Virgin. 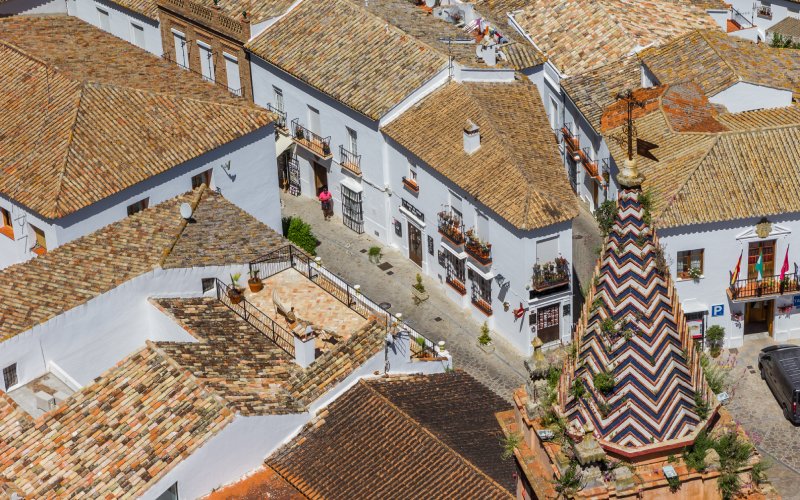 On the way to the castle, the tower of the main church, built after the first Christian conquest, still stands. Attached to the Chapel of San Juan de Dios de Letran, the Clock Tower, a former bell tower, was so named because for years it housed the installation of a pendulum clock. It is the perfect place to look for the conjunction of past and present time. But don’t stop at just the buildings. The best thing to do is to wander up and down the streets, wandering up and down a town that was declared a Historic-Artistic Site in 1983. You can contemplate the typical houses or taste the freshness of the waters of the Sierra Gaditana in the numerous fountains scattered around the town. La Higuera, El Pilar or La Calera are an excuse to stop and contemplate the views, always ready to surprise any gaze.

A nature that is alien to times and kingdoms

Zahara de la Sierra belongs to Grazalema and Grazalema belongs to Zahara. They palpitate in the same frequency, one beyond centuries or reconquests. The inhabitants of this Sierra do not know anything of sultans, kings or betrayals. They do not care about wars or Atlantic invasions, they only breathe to the rhythm of the seasons. They are nourished by a millenary soil, they drink on the banks of the Zahara-El Gastor reserve, they pierce mists and fogs as they glide. 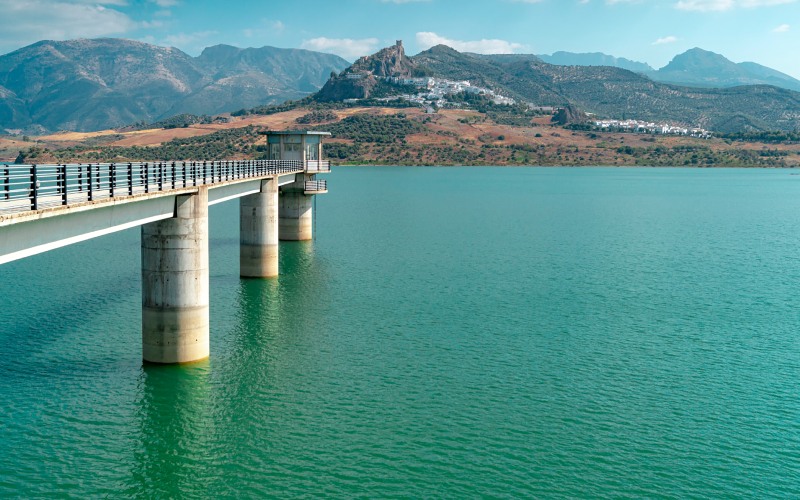 The whole area is a gateway to nature in its purest form, within the Sierra de Grazalema Natural Park, declared a Biosphere Reserve by UNESCO. Caves, grottoes and gorges open and close among unique native flora and fauna. Different routes lead to natural monuments whose vision is in itself an experience, the Garganta Verde (Green Gorge) is one of them. Just 6 kilometres from Zahara, at the Puerto de los Acebuches, the mountain plunges into the void. It is an immense canyon with walls with drops of up to 200 meters. But inside is the real surprise, in the hermitage. A play of chiaroscuro produced by the stalagmites and stalactites that populate it.

Without leaving the municipality, nature also offers unique spectacles. You only have to go to the Spanish fir forest in the town center. A huge family of fir trees from the Quaternary period that have survived to the present day, attentive to all the changes taking place around them. They coexist with strawberry trees and holm oaks, colouring the landscape and oxygenating the air. After the walk, it is possible to enjoy the summer, resting or practising sport on the artificial beach and recreational area of Arroyomolinos. 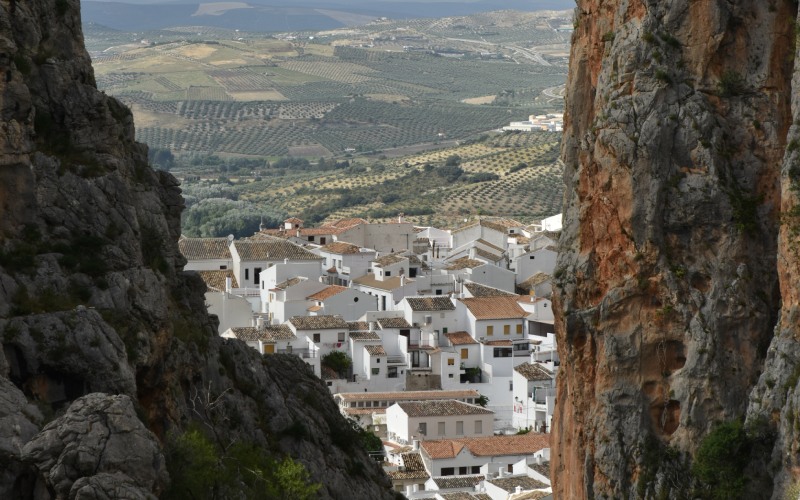 The village of Zahara de la Sierra from the Garganta Verde. | Shutterstock

Trails and routes scratch the sierra, to walk them and enjoy them. As walkers pass by dormice, weasels and golden foxes hide in their dens. Lizards and snakes hide in the undergrowth without taking their eyes off the ground. In the sky, the wings of eagles and vultures command the wind. Meanwhile, on the banks of rivers and streams, crabs and salamanders spread their domain, next to waterways inhabited by trouts and barbels.

Here the human being becomes an exceptional guest at a spectacle that, for sure, continues without his presence. That is why we must take advantage of the opportunity offered. Enjoy the open air. Get to know spaces, walk, breathe, live adventures, imagine and dream in this mountain range that seems, itself, a dream. To relive those lives that make themselves heard through the heritage of a white village that illuminates the mountains. A place with a special history and charm, Zahara de la Sierra. One more reason to return to Cádiz.

Andalusia, cádiz, history, muslim, zahara_de_la_sierra
It may interest you...