Porís de Candelaria is a mystery of nature. One of those treasures with the power to go unnoticed for those who are not prepared to reveal them. A secret carried among birds flying downwind, underlining clouds and cliffs. An open secret that travels with the baggage of the edges of its lyrics, transformed into the cries of seagulls, in the foam of the waves that break against the coast.

Porís de Candelaria is a treasure, of adventures and pirates, of calm and pink sunsets. A contradiction between the silence of a grotto, and the scream of the white houses announcing the presence of men. It appears, embedded in the orography of the island of La Palma, la Isla Bonita, as miracles appear, painting white grooves in the landscape. Combined with volcanoes, coastal paths, Canary pine forests and ocean sunsets, the Porís is inseparable with stars and horizons. It dances with a deep firmament while it waits, perhaps, to be discovered once again.

Tijarafe, the keeper of the secret

The municipality of Tijarafe, located among pine and almond trees in the northwest of the island of La Palma, is in charge of keeping the secret of Porís de Candelaria. Sown with viewpoints and surrounded by lands dedicated to the cultivation of the Canary Island banana, Tijarafe offers endless possibilities to be amazed by a landscape that speaks for itself, without the need of subtitles.

To travel through this area means to start an unexpected journey through different worlds and universes, starting with a row of natural balconies overlooking the deep blue of the Atlantic Ocean. Perhaps copying the balconies of the colonial architecture of the island, they resist the wind, as they resisted the demolition order of Philip II, sunk in the Atlantic waters along with the ship that carried it.

If we move ahead, the path descends through the Barranco del Jurado. We will have to avoid the abyss under our feet, but it is definitely worthy. Without even expecting it, we find ourselves in a soft, black-sand beach, bathed by a clear water that encourage visitors to swim and refresh after their walk. With bare feet, it is possible to leave a trail of footprints on black volcanic sand on the serene Playa de la Veta. Next, La Caldera de Jieqe is home to an exceptional microclimate, as if it was a particular and unique universe. 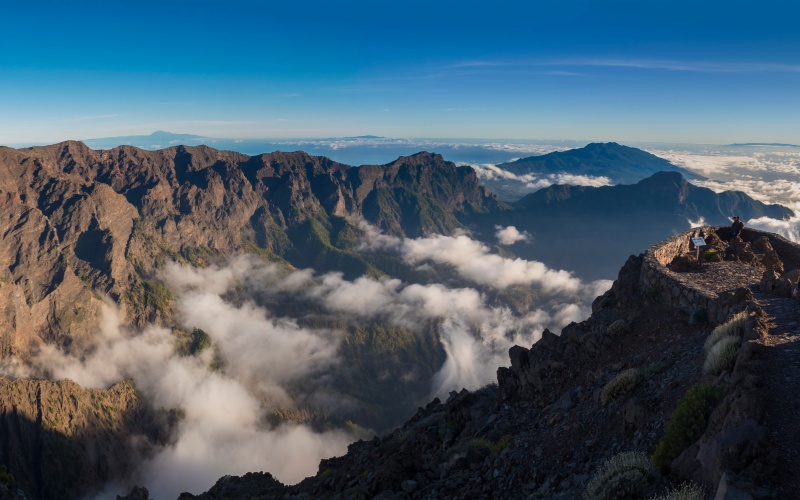 This gorge, cut by knife in the mountain, following the pattern of the Caldera de Taburiente, makes its way into the rock, surrounded by small wooded areas of white tagasastes. Here, during the 19th century, the population of Tijarafe started a route in search of water and natural springs. They were similar to those of the Dornajitos, to supply themselves with water. Goats, used to the stony and impossible terrain, graze safely in these deep lands of rich pastures, full of endemic species, preserved thanks to its microclimate. Not even goats, agile and expert jumpers, dare to descend the coastal path that reaches the abysses of the natural harbor hidden among the cliffs of the island, Porís de Candelaria.

The volcanic nature of the island of La Palma offers sights of imposing landscapes, where nature is singular and sharp. Rises and falls of a terrain in which shapes cliffs, ravines and caves become much more than that, especially in Porís de Candelaria.

In this dreamlike place, a village of white houses inhabits a natural lung formed inside a cave with more than 50 meters high. Inside, with a calm water, bathing becomes a refreshing and adventurous option, which opens doors to marine depths full of life. 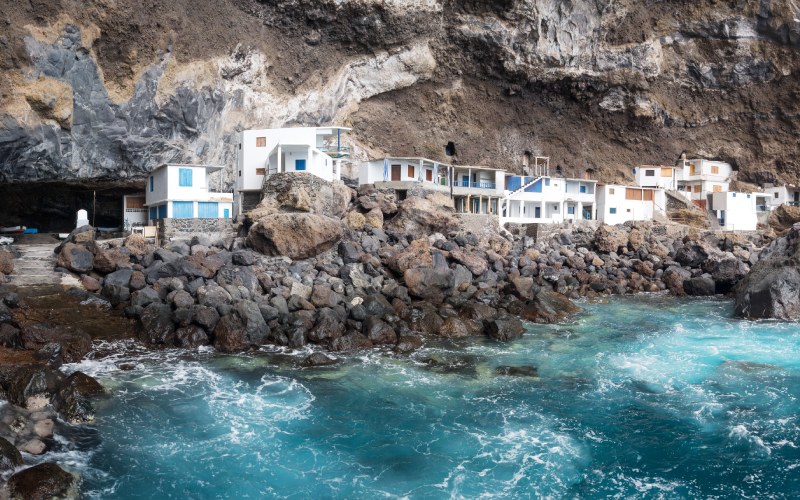 The little white houses of Porís de Candelaria, hidden among rocks of the cave. | Shutterstock

To reach this secret paradise, you have to leave behind the village of Tijarafe, and drive through a road that runs towards the sea. After an asphalted track, it is necessary to leave the car in the parking to continue by foot along a path that descends to the coast. In just ten minutes you reach this place, framed between rock walls that touch the sky, almost 200 meters high.

When you first contemplate the Porís, it is truly a shock. As if you were dreaming, you watch little white houses, decorated with blue windows and doors. The smell of saltpeter mixes with the ancestral and wild ones. Somehow you can feel in the air that you are stepping in an area that has been habited and respected for a long time.

The aborigines of the island of La Palma already knew of the existence of these depths, which used for fishing. But the arrival of the Castilians turned the place into a rocky parenthesis of special importance. At the end of the 16th century its relevance is documented in a reference to a port from which wheat shipments departed, near the coast of Tijarafe. From there, many palmeros also left in search of a better destination, embarking to the Americas.

It was a water supply point, as there is a well near the cave that does not dry up, not even in summer. Inside the cave, the locals took refuge, along with their livestock, to escape the heat of the surface. It was also an open door to communication and commerce, as it was a natural marine entrance to access from other parts of the kingdom or the island. With an area sometimes too complicated to move by land.

Today still offers summer refuge to some families, with some houses reaching 80 years of age. Being also a place of trails and tours, from which to contemplate sunsets almost underground. It is also the starting point for ocean floor expeditions, which belongs to the Isla de la Palma Marine Reserve, all of it a biosphere reserve. Whether you stay on the surface or immerse yourself in the depths, a unique neighborhood is guaranteed. From tropical anemones, bottlenose dolphins or loggerhead turtles, to the spirit of a pirate who refuses to leave his waiting, just outside the neighboring Cueva Bonita. At its entrance used to wait the crew members of the black flag. Unaware that the fishermen who wanted to assault, who knew the the cave, had escaped through another exit, on the other side of the mountain.

To watch the Porís de Candelaria from a boat is to remain faithful to the very essence of its name. Porís means natural harbor or wharf, very similar to the Portuguese term ‘proíz’, or the Catalan ‘proís’. It is also common to hear the name Proís de Candeleria. A name that describes the place, following the RAE, as a stone to which a boat is moored. In this case, named after the Virgin of Candelaria, guardian of the area from heaven and earth, through the image that can be seen on the visit. 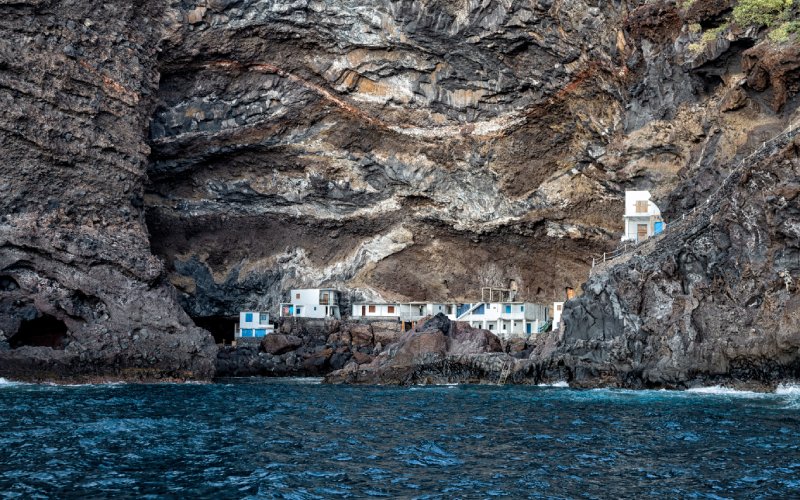 Porís de Candelaria, a view from the water | Shutterstock

During the tour it is easy to meet fellow travelers, whales or dolphins eager to play on the surface. Their welcome is just a foretaste of more wonderful encounters that await the sailor. From the departure, from the Puerto de Tazacorte, the route is full of nature.

The Playa de la Veta or the Cueva Colorada are mandatory stops. But when you sail towards Porís de Candelaria, you will immediately understand that nothing is missing in this impressive landscape. Just a corner in an island, whose nickname is understood, just by stepping on it for the first time. An extraordinary land, full of treasures more imposing than those of the ancient corsairs. The coast of Hiscaguán, a natural monument to biodiversity, the Caldera de Taburiente, such a special place, the route of the volcanoes… 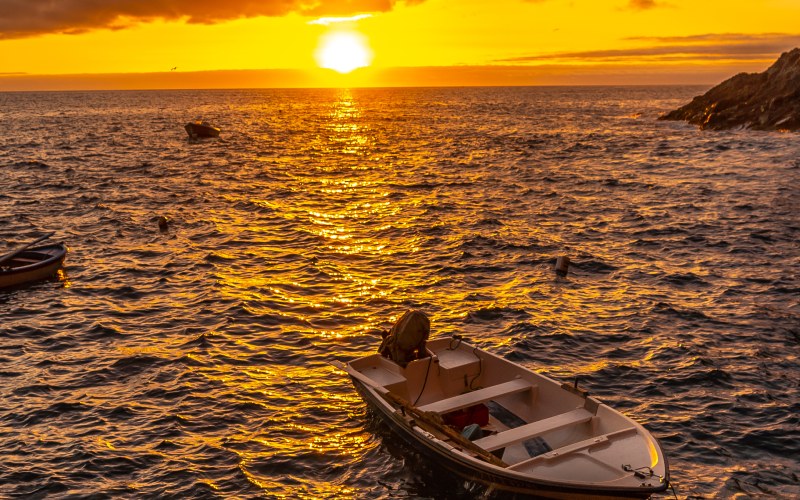 For now, the secret remains here, between this text and the reader, without deadlines or expiration dates that can spoil it. Because it is always a good time to visit the island, La Palma, to meet the Porís de Candelaria, to imagine pirates and submarine voyages. And to touch a sunset with the tips of your fingers.