There is no doubt that squares are the centre of a town’s life. They are where people meet, both socially and religiously. That is why it is common for the most important monuments and buildings to be located right there. To give some examples, the Plaza Mayor in Madrid, the Plaza del Rey in Barcelona or the Plaza del Obradoiro in Santiago de Compostela are well known for their magnificence and beauty. But there are many of unknown squares in Spain that have nothing to envy the most popular ones. Squares that are treasures to be discovered. 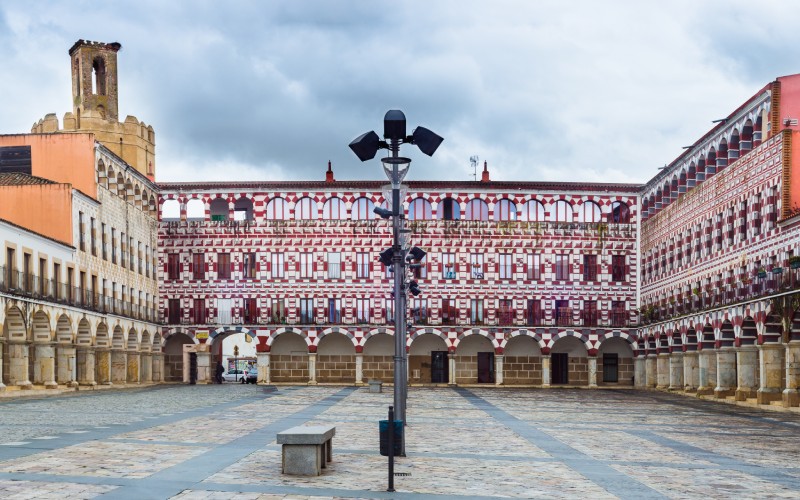 Recently refurbished, the Plaza Alta in Badajoz was formerly known as the public square or simply “the square”. Also known as Marín de Rodezno, it was the old Muslim Zoco. It is an almost entirely arcaded square. Markets were held under its arches during the Middle Ages, as well as all kinds of celebrations and festivities.

It has two clearly differentiated areas. The oldest part, located to the north, has the Arco del Peso or Viewpoint of the city. To the south, the Arco del Toril (Toril Arch) marks the more modern area. Almost rectangular in shape, it is worth noting the flank formed around the old bullpen, whose reform was interrupted by the war of the Spanish Succession. It has Baroque decoration similar to that of the main squares of Córdoba, Salamanca and Valladolid. It is worth mentioning the important buildings in the surrounding area, such as the citadel, the Casas Coloradas, the Casas Mudéjares and the Torre de Esparteros. 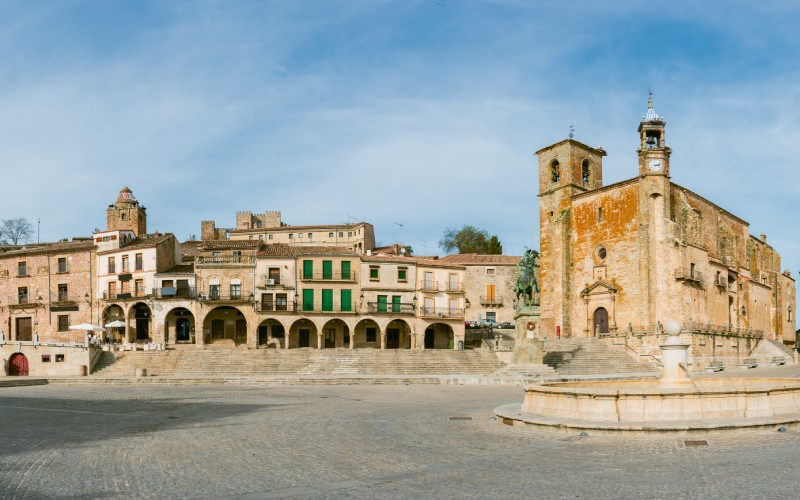 Panoramic view of the Plaza Mayor of Trujillo, Cáceres. | Shutterstock

Of great beauty, the Plaza Mayor of Trujillo, in the province of Cáceres, is the center of the city. This huge Renaissance square is dominated by 15th and 16th century architecture. At its centre is the bronze statue of Francisco Pizarro. This figure, weighing 6,500 tons, is the icon of Trujillo and one of its most emblematic images.

Large buildings overlook the square. The Casa de las Cadenas, so called because of the chain hanging over the lintel, the palaces of the Marquises of Piedras Albas, of the Vargas-Carvajal family, of the Conquest, and the churches of San Martín de Tours and La Sangre, are some examples. 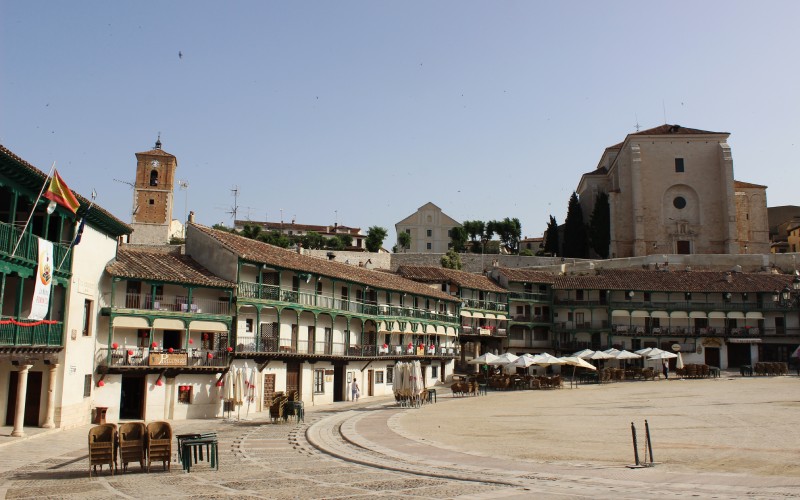 The Plaza Mayor of Chinchón, in the Community of Madrid, is considered to be one of the best examples of medieval porticoed squares in Castile. The buildings contain exposed wooden elements and there are a total of 234 balconies, called claros, painted green, although in the past they were blue. Irregular in shape and with a simple structure, it contains three-storey buildings and lintelled galleries of great beauty.

The square has been used for countless events. Royal celebrations, proclamations, comedy scenes, executions and even as a bullring. Of course, the visit would not be complete without a glass of chinchón anisette in any of the local restaurants. 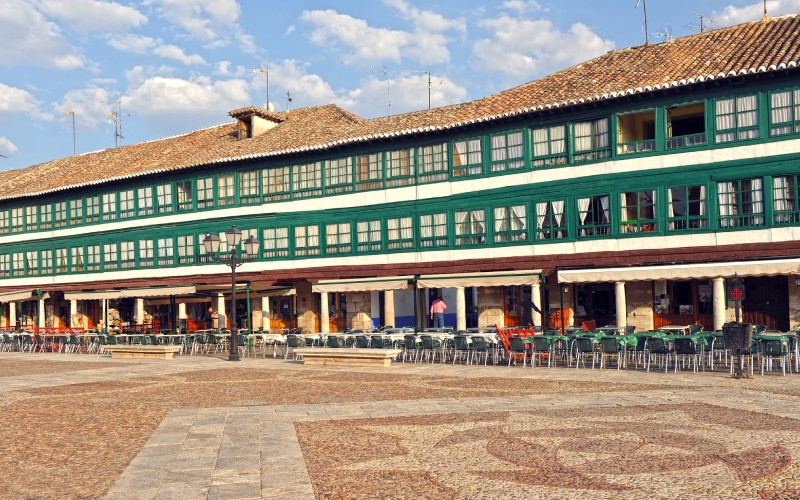 On the road from Toledo to Granada is the town of Almagro, which has been considered a city since 1796. The Plaza Mayor, rectangular in shape and with glazed galleries that give a special air to the two main sides, has had other names such as Plaza de la Constitución, Plaza de la República, Plaza Real or Plaza de España.

It was restored in the 1960s and at that time recovered much of its splendour. Several important buildings stand in the square, such as the Town Hall and the Palacio Maestral. It is worth mentioning that the Corral de comedias de Almagro, unique for its characteristics, is located in the old inn popularly known as the Posada de las Comedias. 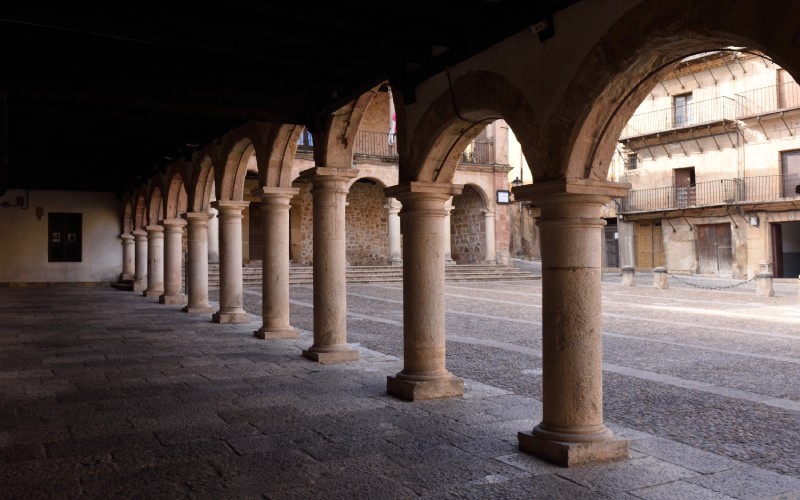 In the 15th century, Cardinal Mendoza created an open space in front of the Cathedral of Sigüenza, in Guadalajara, to hold the weekly market and different shows.

The rectangular Plaza Mayor of Sigüenza has a porticoed gallery on one side that reaches the Puerta del Toril. On the other side, there are houses for nobles, such as the Mirador and the Contaduría. To the north is the Cathedral and was the place where the market gate was opened. To the south, the Palacio de los Deanes, nowadays the seat of the Town Hall. As a curiosity, it is said that some Americans wanted to buy the square to take it stone by stone to the United States. 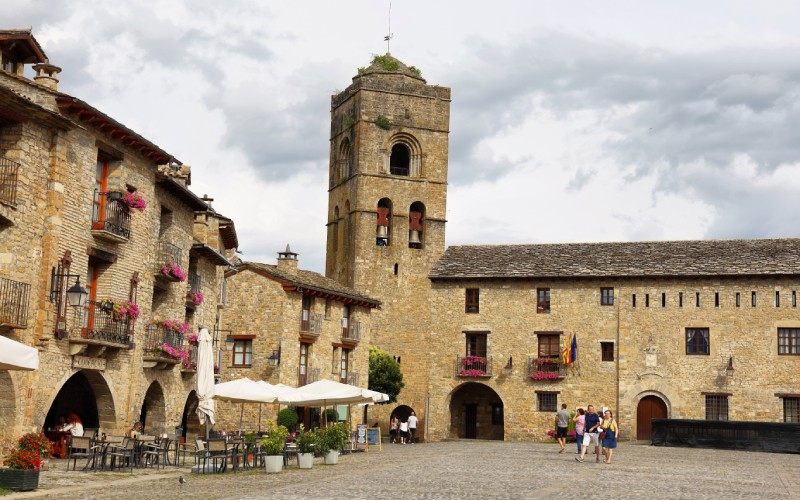 The typically medieval Plaza Mayor of Aínsa, in Huesca, is estimated to date from the 12th or 18th century. Of large dimensions, the original buildings are perfectly preserved. It has a trapezoidal ground plan and the remains of the first wall are still preserved.

Its most characteristic feature is undoubtedly the side porches with their semicircular and pointed arches. There are also two communal wine presses that were used by the inhabitants of the village who did not have their own. The historic quarter of Aínsa has been declared a Historic-Artistic Site since 1965. The village was declared capital of Rural Tourism in 2018. 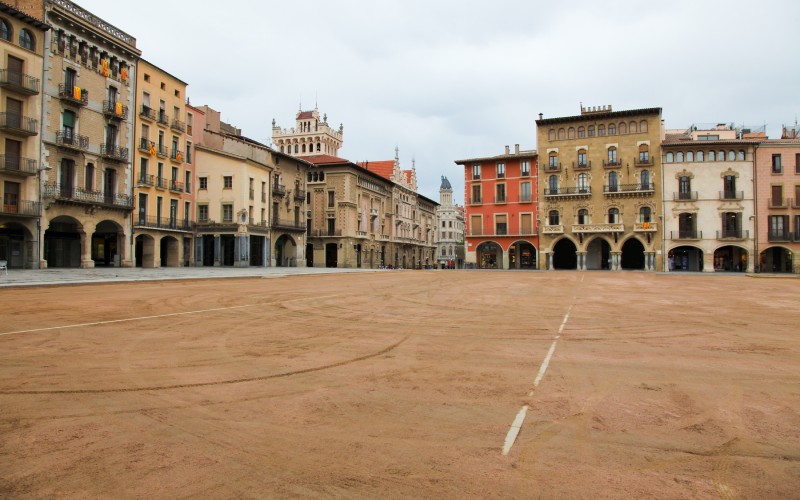 The Plaza Mayor of Vic, in the province of Barcelona, is an arcaded square located in the highest part of the old town. It is undoubtedly the largest square in the city. It is completely porticoed on all four sides and its central part is not paved. It is the setting for fairs, markets and concerts.

It contains unique buildings, such as the modernist buildings of Casa Comella and Casa Costa. The latter has a ground floor and four floors. It stands out for its sculptural compositions on the balconies representing the four social classes of the time: the peasants, the nobles, the church and the artisans.