The supply of drinking water has always been a key issue for cities and towns. That is why fountains are often essential elements in getting to know a locality. From the old and simple to the modern and spectacular, these constructions focus the attention of many squares or parks. Among the most curious fountains in Spain, which are presented below, you can find everything from pure efficiency to masterpieces. A journey to places as far away as Seville or Ourense that starts below.

The first of the most curious fountains in Spain is also the most spectacular. It was one of the highlights of the project that decorated the city for the 1929 International Exhibition. It stretches along Avenida de María Cristina and, after climbing a staircase with a waterfall, you can see its triple central pond. In the background are the Montjuic Palace and the Four Columns, which were rebuilt in 2010 after being demolished in 1928. An overwhelming complex that was planned from the beginning to impress.

The water jets, with a flow of up to 2,600 litres per second, are combined with lights and sound elements in choreographies. It is, for example, an essential part of Barcelona’s New Year’s Eve celebration. There are also performances throughout the year. These take place from Thursday to Saturday between March and January, extended from Wednesday to Sunday in the summer. On the other hand, it closes from January to the beginning of March.

This sculpture has become famous for being one of the few monuments dedicated to the Fallen Angel. In addition, the height above sea level in Madrid means that it is 666 metres above sea level. A coincidence that, together with the evocative surroundings of the Retiro, makes the fountain in which it is located one of the favourites in a city that has other extraordinary ones, such as Cibeles.

Its origin dates back to 1877, when Ricardo Bellver carried it out. The success of this work, which deals with the punished daring of the devil, led to its winning prizes and the decision to exhibit it. After evaluating the possibility of keeping it under a roof, it was concluded that it was better to keep it in the air. Thus, the option chosen was the Gardens of the Buen Retiro. Thanks to this, eight years after its creation, the Fallen Angel of Bellver came to occupy the position it has held until today.

Known as Fuentes Tamáricas, after the Cantabrian people who dominated the area, they are possibly the oldest on the list. Located in Velilla del Río Carrión, Palencia, their legend goes back to Roman times. It was in the first century when the historian Pliny the Elder described them. Of them he said that its flow was intermittent, filling or emptying without much sense. Moreover, before flowing it always made a characteristic sound that served as a warning. It is believed to have been associated with rituals of divination in pre-Roman times, as the Tamaric people worshipped water.

For centuries the Fuentes Tamáricas remained lost. However, in 1781 Enrique Flórez, a Spanish historian, managed to locate them. It was not until the 1960’s, though, that it was almost entirely confirmed that the La Reana Fountain was the same as the one described by Pliny. For example, a Roman altar appeared near it. A hermitage was also built nearby in the 13th century, although the locals were unaware of the myth they had in the village. 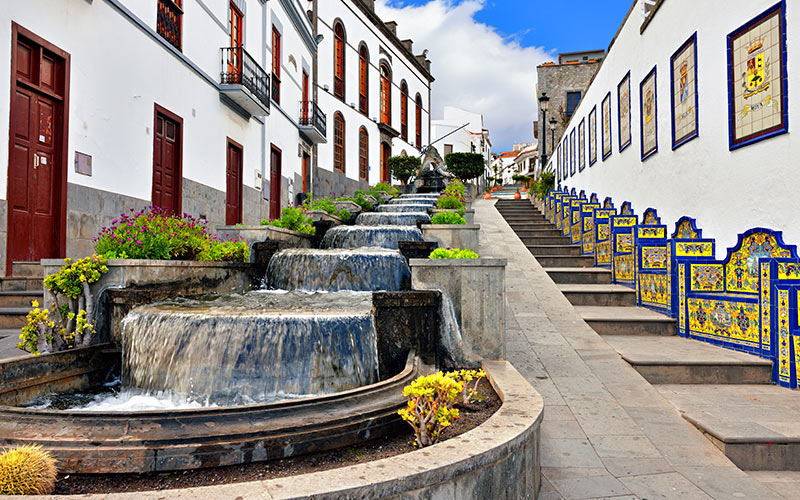 Firgas is located in the interior of Gran Canaria. In addition to enjoying the good climate of the island, one of its great virtues is its abundance of water. On the Gran Canaria promenade is the waterfall that ends up 30 metres down in a fountain. A monument that symbolizes the importance of water in the population and the municipality, very tied to agriculture. The picture is completed by 21 benches representing the municipalities of the island to which it belongs, following the pattern of the Plaza de España in Seville. It is precisely from there that its tiles come.

Grifo Mágico de Santa Galdana, one of the most curious fountains in Spain. | YouTube

A visual game is the great attraction of the next of the most curious fountains in Spain. It is the Grifo Mágico in Santa Galdana cove, in the Menorcan municipality of Ferreries. Although there are others in Spain, like for example in El Puerto de Santa María, Cádiz. A pipe supports and provides the flow to a sculpture in the shape of a tap that seems to levitate. The flow itself hides the invention, so the sensation of seeing it work is strange to say the least.

Fuente of Hispalis in Seville. | Wikimedia

As with the Magic Fountain of Montjuic, a major event is related to the opening of the Hispalis fountain. In this case, the Ibero-American Exhibition of 1929. Therefore, both share birthdays. Seville version was projected a year before by the town hall. The local sculptor Manuel Delgado Brackenbury had the honour of developing it. The set is a beautiful allegory of Seville itself, in which the central female figure stands out.

Unfortunately, the work had an original part cut off for years. Four children with shells from which water jets flowed were removed in 39. It would take 76 years to be replaced by similar pieces. Thus, in 2015 the Hispalis fountain looked whole again. 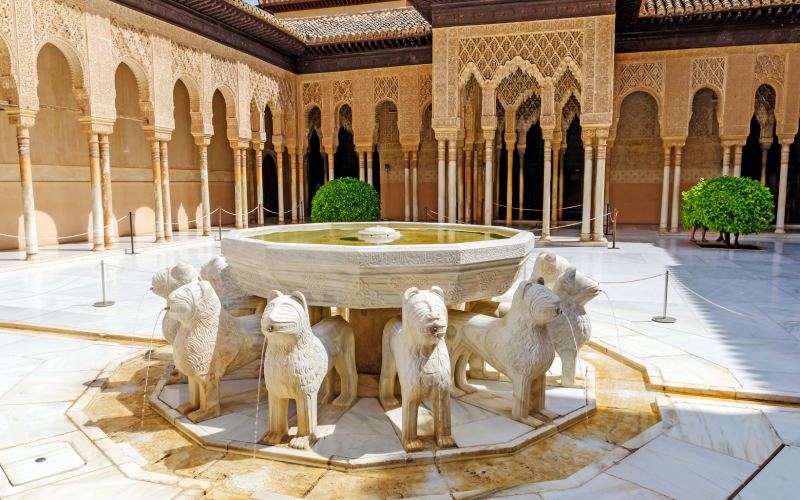 Without leaving Andalusia, the trip to see the most curious fountains in Spain leads to the Alhambra. One of its most famous landmarks is the fountain of Lions in the courtyard and palace of the same name. Although small, it supplies water to four canals that lead to adjacent rooms, symbolizing important Muslim rivers. The central bowl is surrounded by the animal sculptures that give the complex its name. They are an extraordinary example of Islamic sculpture, specifically of Nasrid art. Its size, larger than usual, and its good finish focus the attention of this central room.

Mohamed V of Granada, whose dominion was divided into two periods, commissioned the Palace of the Lions in the 16th century. He was also responsible for extensive reforms and extensions to the Nasrid mass palace. The courtyard, in particular, was started in 1377, already in the second part of the reign. For its part, the animals date from the 11th century. A legend says that the lions came from the house of another important figure from Granada. According to the myth, they were obtained from the house of Semuel Ibn Nagrella. A Jew, he was a powerful vizier who came to rule in practice the Taifa of Granada when the beasts were sculpted.

During the first quarter of the 18th century King Alfonso V made the Royal Site of Granja de San Ildefonso what it is today. This palace in Segovia was the place where he should have waited for death after abdicating the throne in 1724. However, the death of the new king, Louis I, and the political skill of his wife, Isabel de Farnesio, brought him back to power. In any case, the gardens of the place remained among the most beautiful in the country. The fountains it possesses are largely responsible for this.

There are 21 in total, which needed several ponds to function properly. Several sculptors were in charge of designs that drink from allegories and classical mythological figures. According to the time, gods and Greco-Roman entities are intermingled with characters representing elements of the country, such as rivers. Above the rest, the fountains of La Fama, with a jet of more than 40 metres, the Baños de Diana or the Cascada Nueva stand out. It is only possible to see them all working three times a year: in San Luis, Santiago and San Fernando. 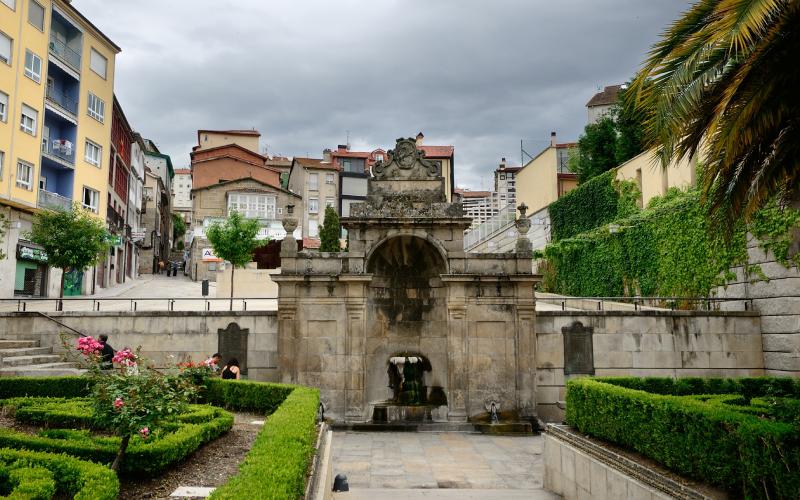 Ourense has the most famous urban thermal waters in Spain. In the current centre are the thermal fountains of Las Burgas, which are perhaps the best known. The springs were exploited by the Romans, who used them both to feed hot springs and with a more sacred character. The benefits of the springs meant that they were never left out.

As for the fountains that can be seen today, the whole can be divided into three parts. On the one hand there is the Burga de Arriba, from the 17th century; the Burga do Medio, more modern and with a visitors’ centre, and the Burga de Abaixo, from the 19th century. The springs that feed them were damaged at the beginning of the 21st century by illegal prospecting. Despite the loss, the hot springs are still part of the heritage of Orense. A great incentive for the pilgrims of the Vía de la Plata who visit it. 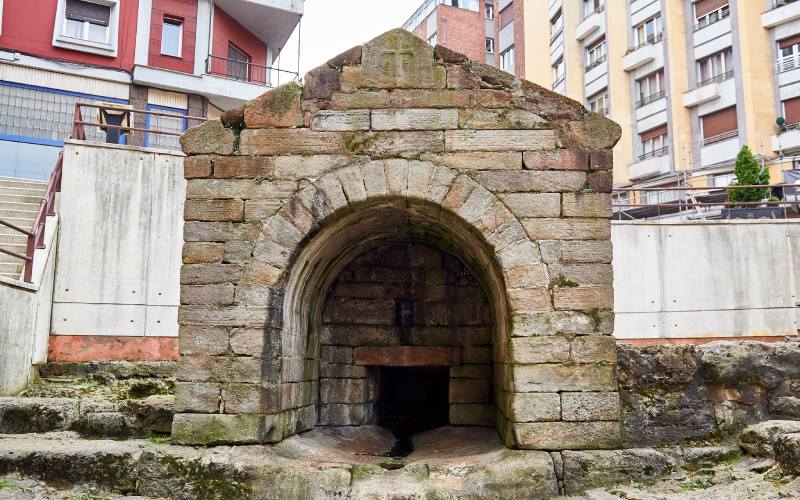 Also anchored in antiquity and in the north, La Foncalada is a rare sight. In Oviedo, it is a unique example of pre-Romanesque civil engineering. The inscriptions suggest that the capital of the Principality of Asturias, and the Primitive Way to Santiago, saw one of the most curious fountains in Spain erected more than ten centuries ago. Thus, it was in the 9th century when Alfonso II the Chaste would have ordered its construction. What is certain, according to documentary evidence, is that in the 11th century it was already active. It is a World Heritage Site along with the rest of the city’s monuments.

Without leaving the Principality of Asturias, this list of the most curious fountains in Spain can be concluded. On the coast of central Asturias, in Avilés, is the Caños de San Francisco Fountain. Six rocky heads each hold a spout in one of the Avilés star monuments. It is old, but not as old as La Foncalada, as it dates from the 17th century. Shortly before it was raised, important works were carried out on the site, including the channelling of the waters.

In this way, the liquid was distributed through different points, including this one. Close to San Nicolás de Bari, it is the only survivor of the original fountains. With respect to the coats of arms, the sides represent the city itself that runs along the Northern Way, while the third is that of the kingdom.

fountains, palaces, parks and gardens, provincial capital, squares, waterfalls
It may interest you...