Siurana is located on an impressive limestone rock and on the marsh to which it gives its name. It is situated between the Montsant and Prades mountain ranges. It was probably completely surrounded by the Christian conquests so that it fell into the hands of the Christians, something that is easy to understand when visiting such a spectacular site.

Between the second millennium BC and the Bronze Age, a population developed in the area that specialised in the production of flint stones; as weapons and utensils. As the stone was replaced as a raw material, the appeal for the inhabitants was drastically reduced because of its inaccessibility. In addition, the fact of being far from the commercial routes made it uncomfortable for the agricultural and livestock farms. Therefore, no significant Iberian, Roman or Visigothic remains can be found. For the same reasons, the Arabs, who arrived in the area around 714, did not settle in the so-called Xibrana until 869.

But it was not until the 11th century that the town entered history. This was due to the fact that the Christians gradually displaced people from other areas, who found security in such a rugged and remote enclave. This border region was governed from the small castle of Xibrana. It was the centre of a valiyat (administrative entity) governed by a vali, whose power came to be equivalent to that of a Taifa king. It was a large territory, mainly mountainous. The inhabitants lived dispersed, organising their daily life and the exploitation of natural resources from numerous farmsteads.

On 17 February 1146, Count Ramon Berenguer IV ceded Ciurana to the knight Berenguer Arnau, reserving one fifth of its territory for the Order of the Temple. But to occupy his dominion he had to first conquer the region tenaciously defended by the vali Almira Alemoni. The Knights Templar were unable to do so. They occupied all the surrounding villages over the next five years. It became an area isolated from the rest of the Muslim territories. Finally, after a siege, in 1153 the knight Beltran de Castellet conquered the last stronghold of Muslim resistance in Catalonia. 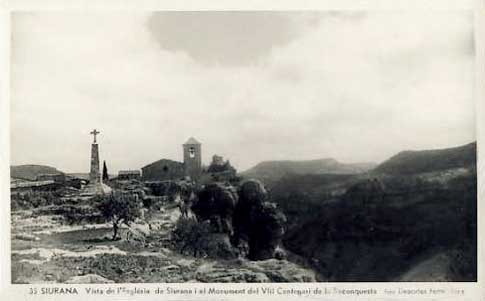 The Church of Santa Maria on an old postcard

In the following century and a half it was given by the kings to their wives as a safe place for their property. It would also be used as a prison. Throughout the years, the surrounding towns, when there were persistent droughts, would go up in procession to the church of Ciurana, with the Vera Cruz and the Santo Cristo.

Siurana as a refuge

During the Catalan Civil War between King John II and the nobles grouped in the Generalitat, the faithful (Juan Ramón Folch III of Cardona and the Archbishop of Tarragona) used this fortress as a base for the king’s army against the rebel nobles who occupied the towns on the plain. In 1651, at the end of the Reapers’ War, the king’s troops made the fortress unusable so that it could no longer serve as a refuge for rebels. Due to its inaccessibility, during the War of Independence it was a base for the guerrillas. During the Carlist Wars, the guerrillas occupied the fortress, attacking the mainly liberal and government loyalists in the plains.

After the Spanish Civil War the place was a refuge for anti-Franco maquis. Thus, it was abandoned during several decades, because the neighbours went down to the village of Cornudella de Montsant, on which it depended administratively. Given the abandonment and the lack of security, in 1979 the Romanesque image of the Virgin of the Water was stolen from the church. This has been replaced by a replica.

Its great tourist attraction has brought with it the recovery of a permanent population that attends travellers. On 29 May 2010, asteroid number 209,540 was named Siurana.

What to see in Siurana

In this remote, inaccessible and spectacular place, the uniqueness of the site dominates everything. The town is positioned on a natural ridge of the rocky massif. Therefore, it is only accessible by one of its slopes, as the rest is empty. The views from Siurana of the surrounding area are spectacular. 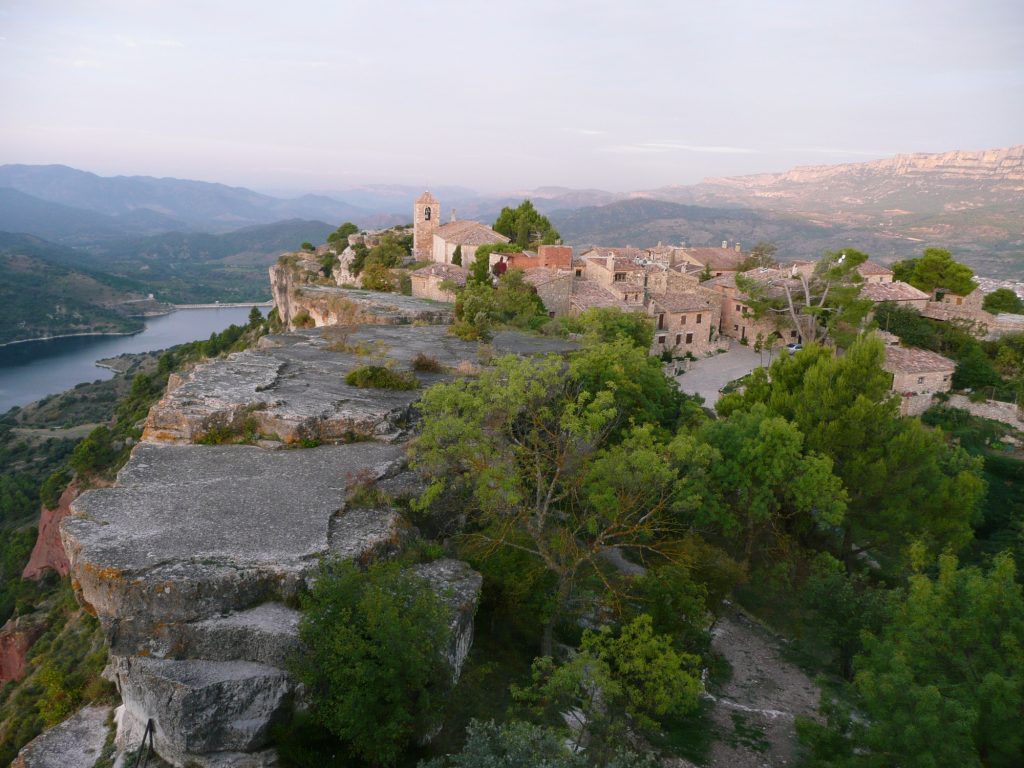 It is essential to go to the edge of the rock by the so-called Salto de la Reina Mora; where the crag of La Trona is. It is the place where tradition indicates that Queen Abd-el-Azia threw herself into the void on her white horse. The reason was that the Christian troops managed to overcome the wall of the place and were preparing to take her prisoner. The cut, with more than a hundred metres of fall, is something spectacular to see in Siurana.

The old houses of the farmers and livestock breeders have been restored using traditional criteria by descendants of the inhabitants and by holidaymakers. At the end of the village, the 12th century Church of Santa Maria has a beautiful and simple Romanesque design. Stop to enjoy its harmonious facade with three archivolts and a magnificent carved stone tympanum above the door. There are some simple representations of Christ crucified accompanied by several apostles, two lions, the sun and the moon. An essential temple to see in Siurana. 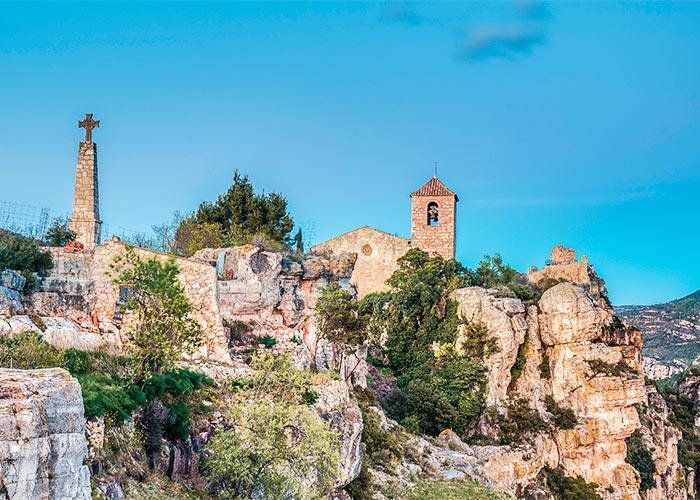 The so-called Castle of the Vali Almira Alemoni that you can see in Siurana is of Muslim origin. It has been documented since 1231. It was a fortress considered to be impregnable. After being dismantled in the 17th century, its walls, some towers and the remains of a circular tower remain. They were consolidated to avoid later collapses.

As for its cuisine, Siurana has given its name to the olive oil with Designation of Origin that is grown in the surrounding areas.

Catalonia, reservoirs, Tarragona
It may interest you...

The Templar castle of Miravet, the fortress that led the Valencian reconquest
On the right bank of the Ebro River, a few kilometres from its mouth on Más información