Tobera is a town located in the municipality of Frías, in the region of Las Merindades in the province of Burgos. It is one of the many spectacular places that holds Castile and León. The waterfalls of the river Molinar are the sign of identity of this small corner of Burgos; whose first references have to be sought at the beginning of the 11th century. At that time, Gómez Díaz and his wife sold the town of Oña to Count Don Sancho. In exchange they received this place full of houses and mills that later, in 1489, became a district of Fredén; as well as one of its great attractions. 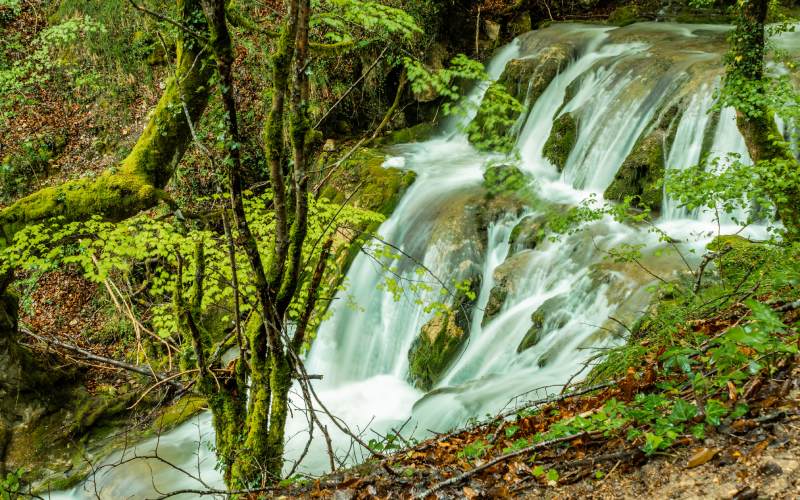 One of the waterfalls of Tobera. | Shutterstock

Water as a connection point

The River Molinar, which flows down from a steep gorge, unites and divides the village into two areas. A multitude of waterfalls are formed along its course and its flow crosses such picturesque corners as the Roman-Medieval bridge. Right next to it is the hermitage of Santa María de la Hoz and at its feet the Cristo de los Remedios. The first, from the 13th century, is built on the remains of a previous temple. Of late Romanesque style it shows some Gothic elements and is documented as a guesthouse for the pilgrims of the Way to Santiago, of one of the branches of the French Way. 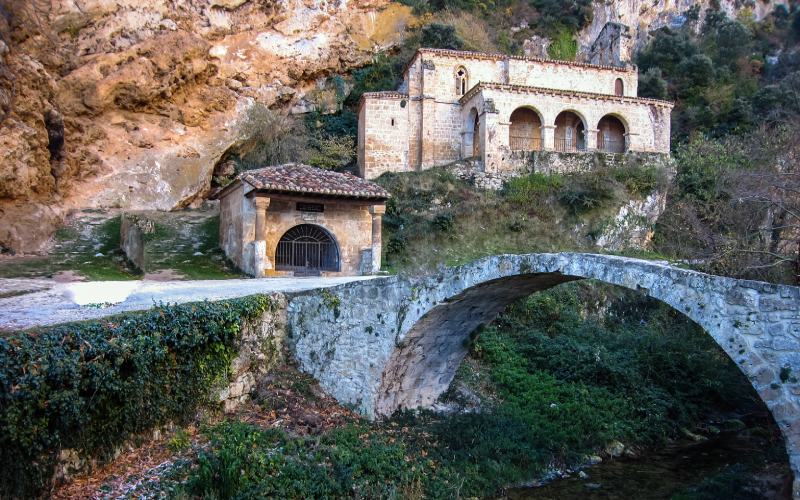 It is made up of a single nave decorated with frescoes. Once a year the Tobería pilgrimage is held, at which time it is possible to visit the chapel. The walking altar or humilladero of the Santo Cristo de los Remedios from the 17th century keeps a carving of Cristo Auxiliador in a showcase. At its feet a carved snake stands out. Legend has it that one day the queen’s mail passed by and her horse ran wild when one of these reptiles was found on the bridge. The messenger entrusted himself to the Christ of the Remedies and was saved.  Grateful, he ordered the construction of the sanctuary; whose altar was the predecessor of the one that can be admired today.

From this point it is possible to follow the Paseo del Molinar to enjoy the different waterfalls and viewpoints of Tobera. Some stone stairs, on the right bank of the river, accompany visitors to a place where the first waterfall can be seen. From there, the streets of the village let you enjoy up to five waterfalls along the way.

The tour ends in an impressive waterfall that falls on the old Tobera bridge. The most habitual thing is to return to the hermitage by the left bank. A great alternative is to have a picnic at the tables set up in that area. It is worth mentioning that the small bridge was part of the Roman road that joined this area with the northern villages. 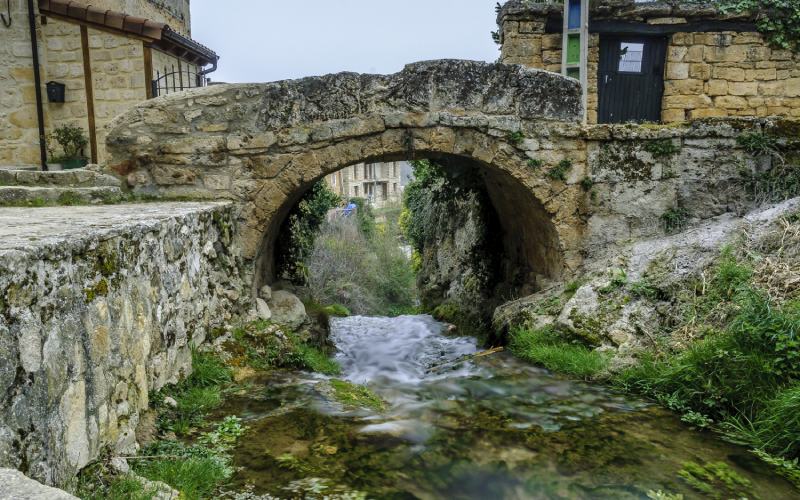 Water as a source of wealth: from the paper mill to the power station

In the past, many mills operated at full capacity; taking advantage of the energy offered by the flow of the waterfall. Already in the 12th century a paper mill is documented; considered to be one of the oldest in Spain. The paper mills took advantage of the driving force of the water to generate a quality and long lasting paper.

During the 16th and 17th centuries these mills supplied paper to most of the printing presses in the city of Burgos. The production of wool and linen at the same time is also documented. Nowadays, the hydroelectric power station of the town of Tobera is in charge of taking advantage of all that hydraulic energy. 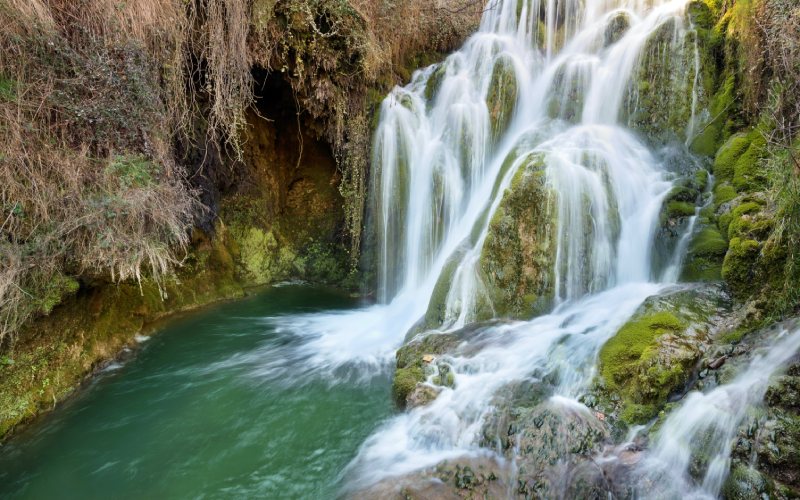 The gorge that crosses the Obarenes mountains was an important communication route that linked La Bureba with Orduña through a Roman road. This gorge, like a tube, gives its name to the village of Tobera. Legend has it that the limestone or tuff stones deposited in the water are princesses. The girls preferred to become stone before being disgraced by villains. The hermitage of Nuestra Señora de la Hoz was built with these rocks. 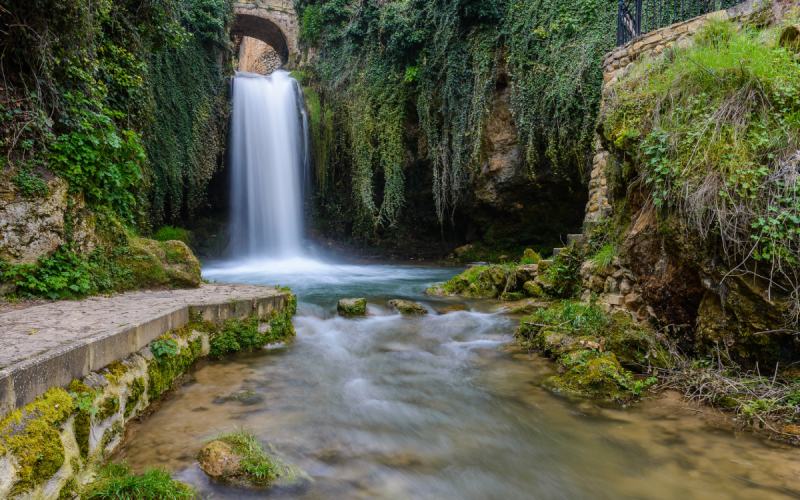 Fall of water in Tobera. | Shutterstock

One of the best times of the year to enjoy the waterfalls that cross this small village is spring, just after the thaw. The entire tour, an easy route of a little more than 1 kilometer, can be done in 30 or 45 minutes. Then the noise of the waters is one of the most distinctive features of the place. A great fluvial flow is deafening, generating a peculiar atmosphere. 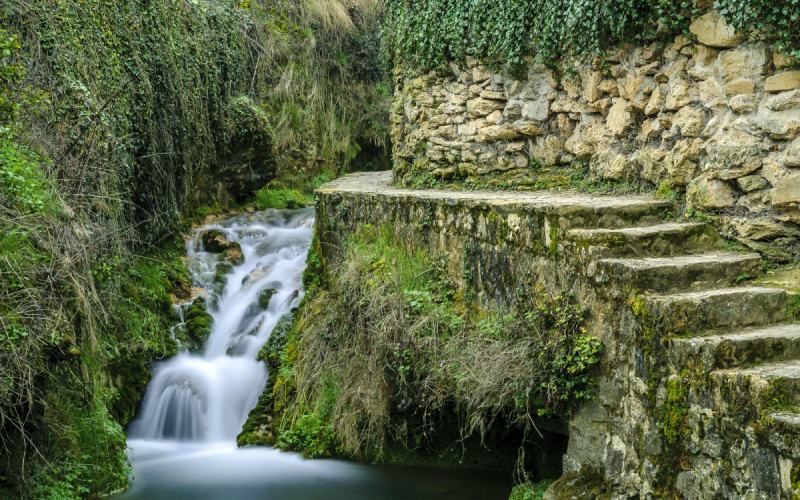 A perfect complement to an on-the-spot getaway awaits at the head of the municipality to which it belongs. Frías is considered the smallest city in Spain. This title was given in 1435. Today it is a town with a curious profile. Perched on the top of a mountain, its castle rises up on a cliff in a spectacular way. A medieval atmosphere that confirms the renovated church of San Vicente, at the other end. Over an abyss, like the hermitages of Mont-Rebei, it was the victim of plundering during the early part of the century. Then it lost its Romanesque portico. In any case, the whole town is a good place to spend the day.

Burgos, Castile and León, natural environment, waterfalls
It may interest you...