The villages of the Ara river emerge around it like splashes of the water it carries along its course. They accompany its descent, from its source in the peaks of the Vignemale massif to the end of its course, in Aínsa, where its waters merge with those of the Cinca. The terrain communicates with one of the last untouched rivers in the Pyrenees in a meandering language of its own. Nature, medieval cobbled streets and stories that become legends. Colours and textures that change as the days go by. And a cuisine that tastes of smouldering firewood and tradition. All this and much more can be found in the towns and villages of this river course in Huesca. 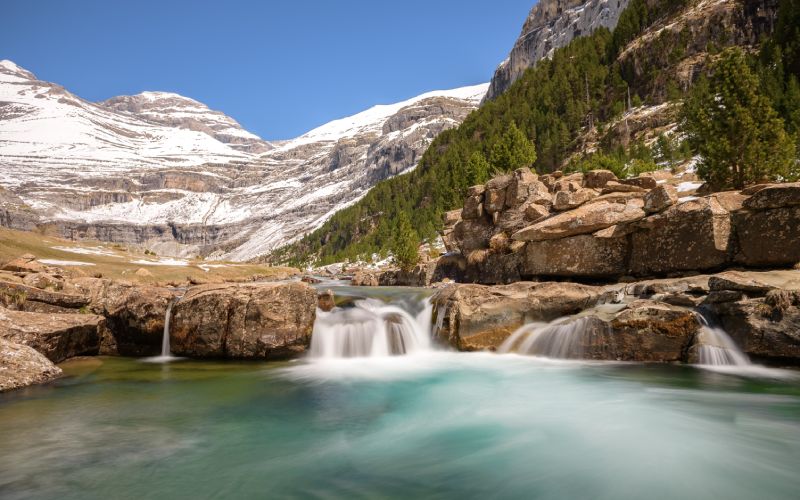 Waterfall of the Ara river. | Shutterstock

First steps between mountains, from Bujaruelo to Oto

The Ara river flows between valleys and mountains forming landscapes that resemble postcards. It is easy to be tempted to get lost in them, to stand still and just enjoy nature. The sight of the river, the clean air, the secrets that seem suspended in the branches make it easy to lose track of reality. But the traveller wakes up immediately, startled by the flight of a bearded vulture climbing the peaks or the sudden song of a capercaillie. 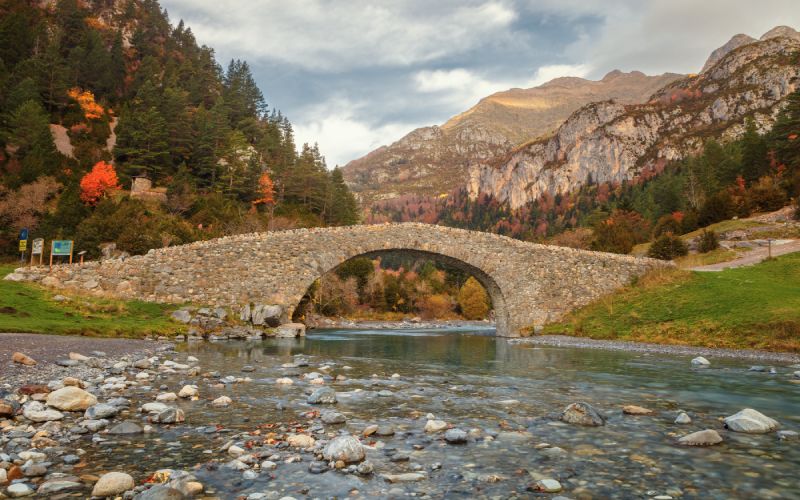 Image of the bridge of the Navarros, where the Ara and Araza rivers converge.| Shutterstock

Bujaruelo is the first stop on a natural stairway that descends from the clouds. It offers quiet walks along the river and, for the more adventurous, the possibility of touching the sky. This can be achieved by climbing to the top of its mountains, Taillon, the Gavietos or Vignemale. The Church of San Nicolas and the hospital of the same name are must-sees. A stop on the way gives you a rest and the possibility of observing the union of the waters of the Ara and the Araza under the bridge of the Navarros.

Afterwards, the course of the Ara river leads to Torla, on its right bank. This is the gateway to the Ordesa y Monte Perdido National Park, which is home to more than 1,500 species of mountain flowers typical of the Huesca Pyrenees. Chamois, partridges and sleepy marmots spy from their hiding places. For a long time it was a defensive village, due to its status as a border crossing. Natural and architectural vestiges remain from those times. The enormous rock on which the church and castle stand does not go unnoticed during the visit. Nor the chimneys with their scarecrows full of legends. 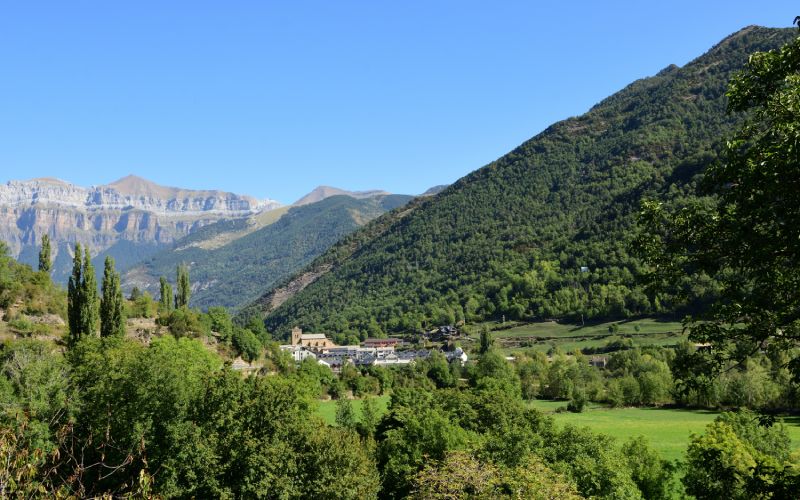 View of Broto rising between the mountains. | Shutterstock

Centuries-old gusts whistle through the cobbled streets and houses. The wind blowing down the slopes points to Broto and Oto as the next stops along the Ara river. In the former, the traveller is welcomed by the prison tower, the Church of San Pedro (from the 16th century) and the Casa del Valle, where the locals used to meet. Just 5 minutes separate these streets from the Sorrosal waterfall, next to a via ferrata.

The road surprises with the sight of Oto, dotted with traditional houses with smoking chimneys in autumn and winter and shiny sunny roofs in summer and spring. This is the end of the Hospitaller Route, which begins in Bujaruelo. In Oto they remained writing their story until the 15th century.

From one side of the Ara river to the other in Sarvisé, Fiscal and Jánovas

The left side of the Ara river hides a secret of forests and thickets, stone houses and slate roofs. The name of Sarvisé smells of sloes, evergreen meadows, horse riding and hiking trails. A 12th century church tower still stands, surviving the succession of days and nights, as it did the fire that ravaged this small village during the Civil War. Nearby, nature’s palette of colours dominates and its painting of the Huesca forest is presented in all its splendour.

It is worth leaving the river for a few moments and taking the road to Fanlo. After about 12 kilometres you reach a mystical place, the Bosque de la Pardina del Señor Fanlo. A surprise for the eyes and ears; where the chirping of birds tells of the passing of the seasons. Returning to the Ara river , Fiscal awaits us, decorated with the coats of arms of the infanzones. Between the roofs, the tower of the Casa Costa, from the 16th century, can be seen. 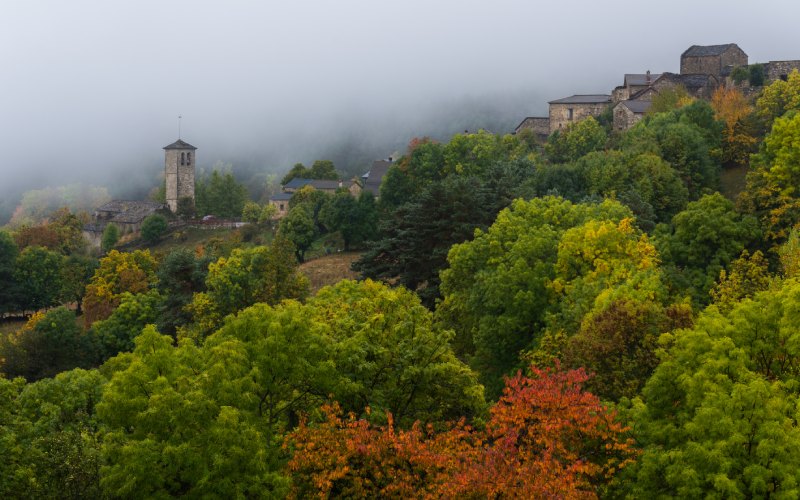 Fanlo in the forest. | Shutterstock

Its borders are home to two real treasures, the Pórtico de Jánovas, which opens in front of the Church of La Asunción, and the Batán de Lacort. Symbols of the history that has seen these mountains of the Huesca Pyrenees unfold in silence. From Fiscal you descend to Jánovas, a village that gave its name to a reservoir that transformed it into the ghost of what it once was. A suspension bridge mourns a past abandoned by a future in the process of reconstruction.

The present is made up of crumbling houses and a green wave of ivy that floods everything. In the air, neighbours’ yelling; louder than ever in the midst of the silence. “Jánovas no rebla”, Jánovas does not die. It is true. The strength of the locals promises a seed of reconstruction eager to blossom amidst the fallen stones.

Boltaña and Aínsa, the end of the journey

Boltaña is the last stop before reaching the end of the descent of the Ara river, and of the travellers who accompany it. This place in northern Huesca is always a pleasant surprise for the traveller. Strolling through its old quarter, one of the largest in the Pyrenees, is more than a must for the visitor. Capital of the Sobrarbe region, its history draws from different sources, including the river that bathes it. The old quarter is an attraction in itself, full of treasures such as the Casa de Don Jorge and the Casa Carruesco, both dating from the 16th century. 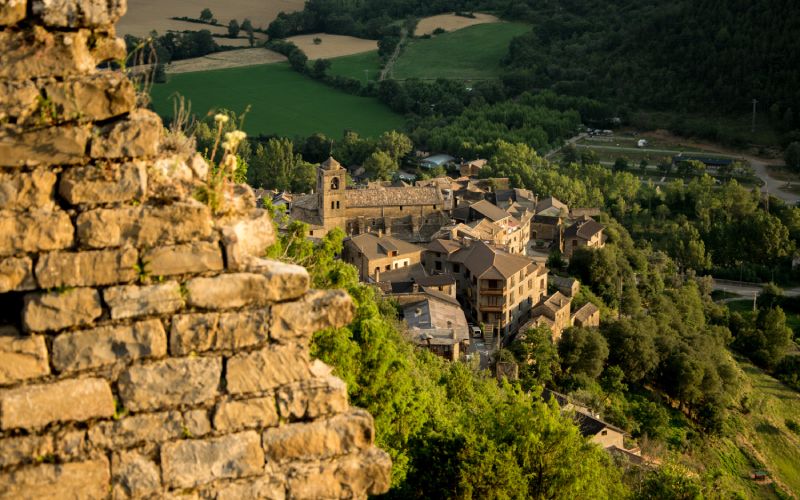 Boltaña coloured by the sunset. | Shutterstock

It is said that in the ruins of the medieval castle, some people can still hear the whispering of the covens that, according to tradition, used to meet there. Leaving the magical world behind, you should not miss the Gorga de Boltoña, a natural pool formed by the Ara river as it passes through the town. Opposite it, the “Noria de Agua” (water wheel) has been restored, which helps to irrigate the surrounding fields. Food accompanies every step and a bit of cheese, honey or pâté helps to replenish your strength before facing the final stretch.

Aínsa puts an end to the course of the river and to this route through its villages. At this point the Ara and the Cinca meet, their waters join and continue. Time seems to stand still in the network of its streets, squares and houses, declared a Historic-Artistic Site. Considered one of the most beautiful villages in Spain, contemplating its heritage is a one-way ticket to the Middle Ages.

The main square, Plaza Mayor, offers the perfect moment to get lost among shopping and aperitifs in its bustling arcades. For those who are looking for a place for silence and meditation, there is the Church of Santa María, popularly known as the Church of La Asunción. And the castle, a site of cultural interest, can be used as the setting for a knightly joust. You do not have to let your imagination run wild to chase a mystery in Aínsa. The Crismón Trinitario, over the arches of the church door, or the Cruz Cubierta, are questions that invite you to unravel them. 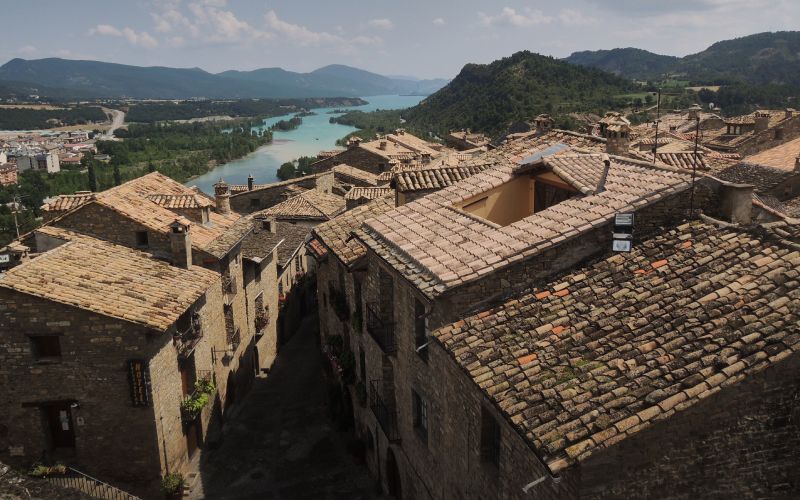 View of the roofs of Aínsa and the river in the background. | Shutterstock

The journey of the villages along the Ara river does not really end here. Like veins that carry life through the land, the Ara and its tributaries form landscapes, stories and enigmas that remain. The smells, the tastes, the colours and the sound of the river and the birds crossing the sky. Everything is engraved in the traveller’s memory. The memory of the villages along the Ara River will be a new journey.