We must start at the beginning. By recognizing that in Spain, in summer, if you do not live in the North, it is difficult not to be hot. Temperatures reach unbearable temperatures in June, July and August. The nights last forever and any breeze that heralds the arrival of milder climates is welcome. It is obvious. And although great efforts are made to cool off in these circumstance, it seems that in some places it is never enough.

However, it is possible to seek and find a slightly cooler summer. The one offered by the north of the country, of course. Although the communities that support the peninsula from above also suffer from complicated days in this sense, they are still fiefdoms for those who do not want to introduce in their vocabulary the words “thirty degrees”. It is possible to escape the heat. At least a little. 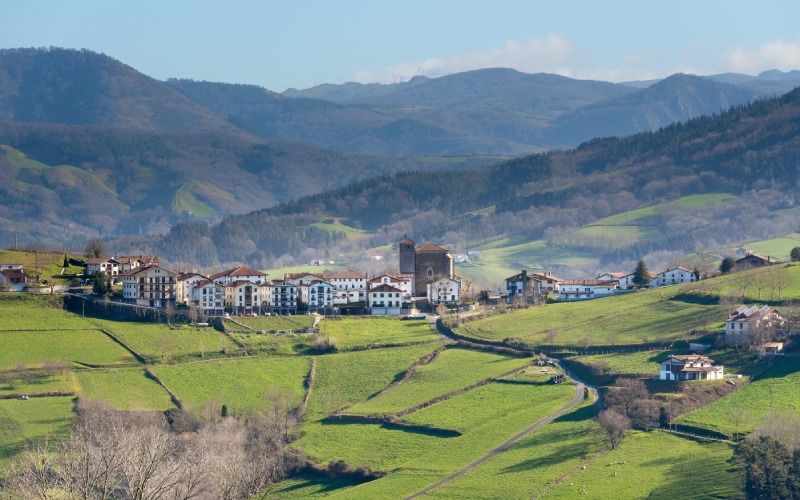 The environment around Abaltzisketa is fantastic. | Shutterstock

Located in the middle of nature, the village of Abaltzisketa will surprise for different reasons. First of all, because the visitor will forget the word summer. Of course there are hotter days than others, but in general there is a fantastic freshness that allows you to rest and enjoy the mountain with the ideal temperature. Many mountaineers leave Abaltzisketa to climb nearby peaks, as it is located in the foothills of the Sierra de Aralar, under the slopes of Mount Txindoki. Its old town, the farmhouses that flood the area and the hermitage of Larraitz, from the 18th century, stand out, which is a pleasure to visit. 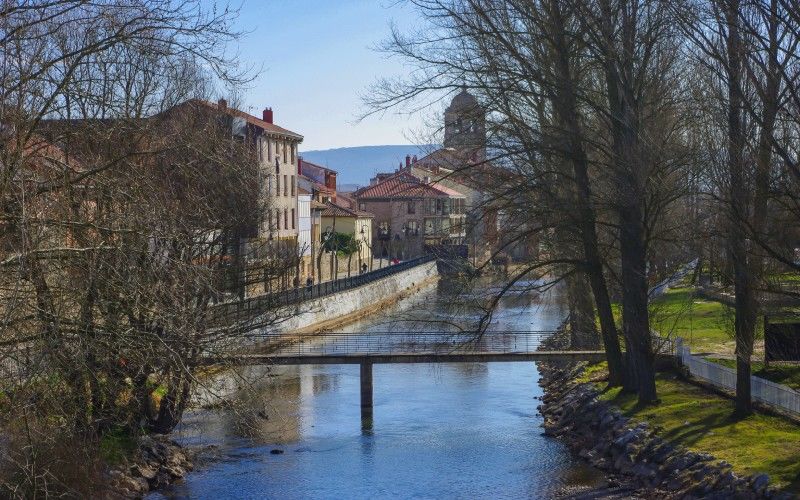 Cervera de Pisuerga is always a great choice to start getting to know the province of Palencia. | Shutterstock

Temperatures drop even lower in Cervera de Pisuerga, in the heart of the Palencia Mountains. Because of its location, it is a perfect place for those looking to escape the heat but want to keep moving. There are numerous activities that can be practiced in the wonderful environment in which this town is located, which has managed to preserve the rural and traditional essence of its origins. Do not leave without visiting the cave hermitage of San Vicente. 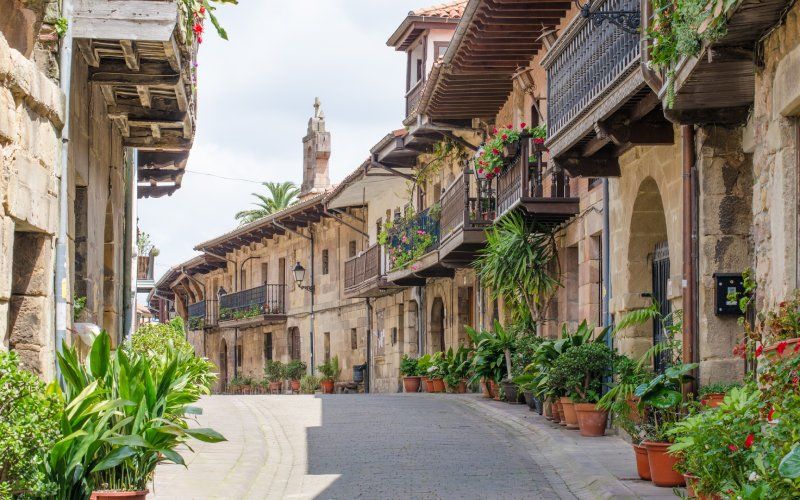 Cartes can boast of having a most interesting architecture. | Shutterstock

Cartes, for lovers of the twenty degrees and also of the villages that have managed to preserve their medieval aspect. This small town in Cantabria, arranged around a charming street, has been declared a Historic-Artistic Site. For the good preservation of all the elements that refer to another time and for its traditional mansions, which still maintain the noble coats of arms of yesteryear. This town deserves a quiet walk, which should begin by the so-called Camino Real (Royal Road) that shapes the whole set. It also offers the visitor the possibility of getting to know the environment easily imaginable when it comes to Cantabria: mountains, greenery and peace. 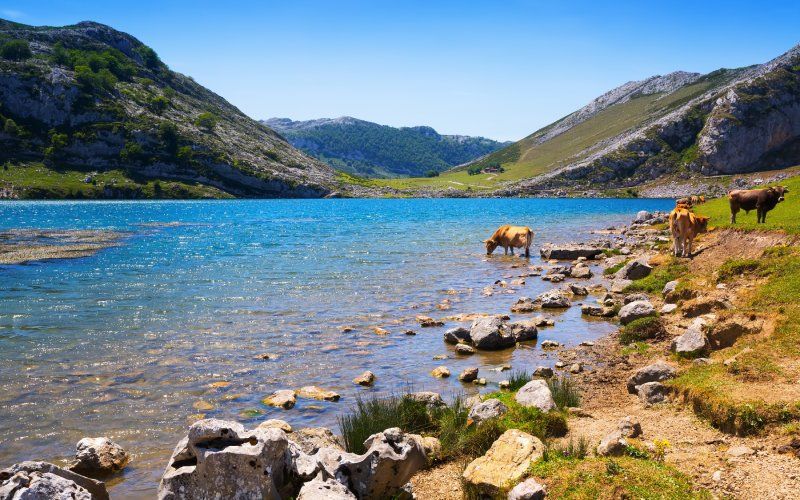 There is no time of the year when the Lakes of Covadonga are not appetizing. | Shutterstock

The highs in summer, in this small village of Asturias, can match the minimums that are maintained in certain areas of the south of the peninsula in these months. On that side, all the necessary information to want to visit Corao is presented, but it is also a place that can surprise. Because you walk calmly and with joy, because it is very close to the lakes of Covadonga, which in itself represent an ideal destination, and because they offer visitors a good experience in Asturian land. All seasoned with many hiking trails and great gastronomy. It is no coincidence that Asturias is such a popular summer destination.

Espinaréu, Asturias, a beautiful village in the North 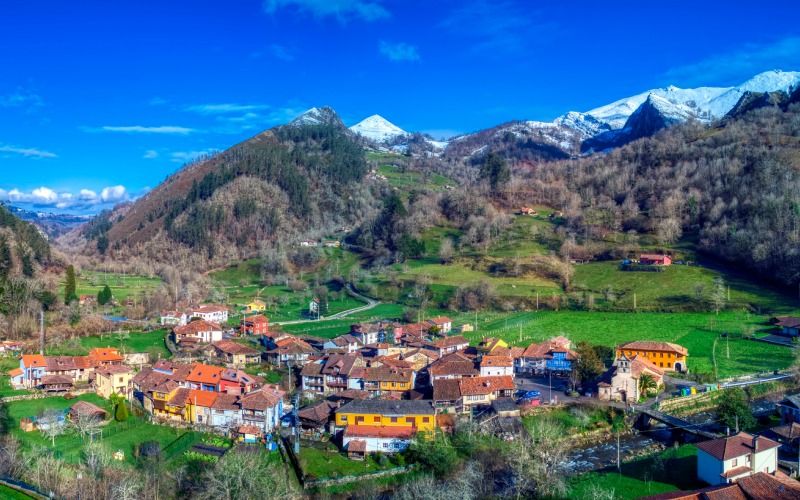 The villages that make up the parish of Espinaréu are ideal to spend a few summer months. | Shutterstock

This parish is another dream for those who dream of Asturias. And with its temperatures. In the interior of the Sierra Bedular, Espinaréu, a concentration of villages, awaits between green forests and absolute freshness. Ready to conquer with spectacular views and traditions. This area preserves part of the most ancient wisdom of Asturias, with numerous granaries dotting the landscape. Also its typical rustic houses attract the attention of the traveler, who will want to stay and stop that nightmare that threatens to end so much history and so much life: depopulation. 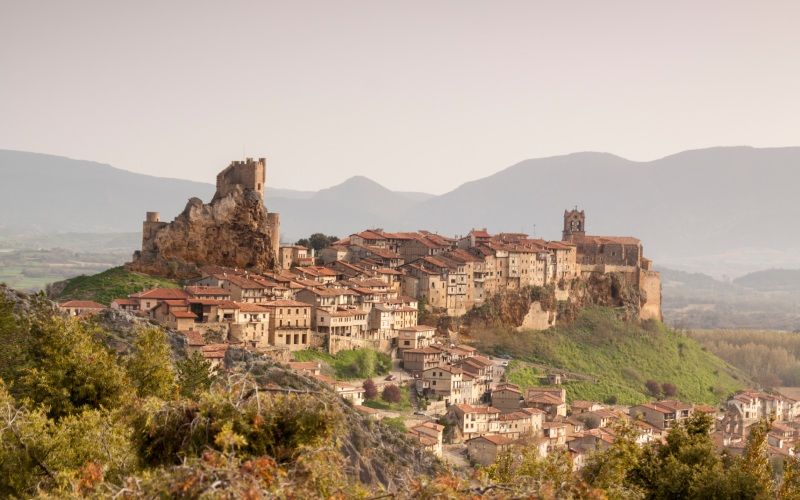 Frías, in Burgos, can also live up to its name in summer. | Shutterstock

It is hopeful to find in this text a place that lives up to the name of what you are looking for. Frías, located in the north of the province of Burgos, experiences its hottest month in August, but it doesn’t need to mention those dreaded thirty degrees. The balance is found, during the day, between twenty and twenty-five. At night, temperatures drop to fifteen degrees. To be clear: in Frias you can sleep tucked in.

It is another destination to stay. Its history is linked to the same history of the land, has an old town declared a Historic-Artistic Site and the Ebro runs under its castle, whose origin dates back to the tenth century. As a curiosity, it came to hold the title of city. Some consider that it still is, although it is the smallest in the country. 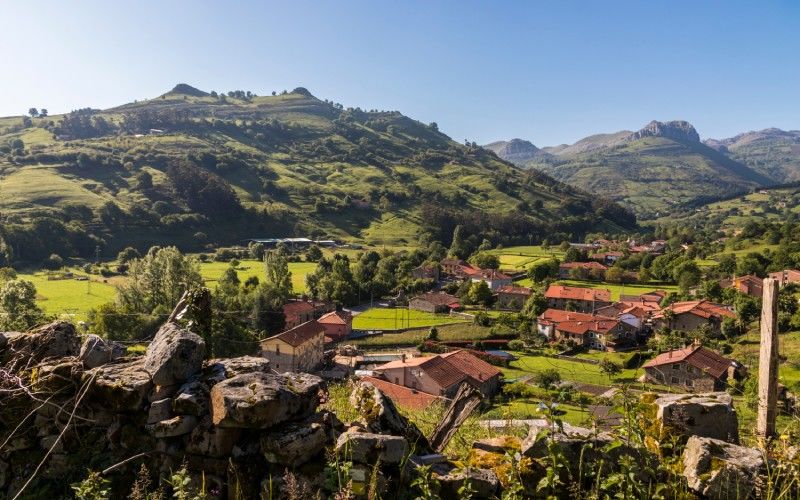 Liérganes, one of the most desirable places in Cantabria. | Shutterstock

Liérganes, a small Cantabrian village hosted, during the 17th century, what is considered the first Royal Artillery Factory in Spain. Thanks to its activity, the town grew and consolidated as one of the most prosperous in the area. Although that past has been left behind, that prosperity can still be felt in its streets. Its urban area was declared of National Historic-Artistic Interest more than thirty years ago.

Still today it is one of the most visited villages in the community, for its beauty, its possibilities and its popular legend. Surrounded by forests and very attractive from an architectural point of view, Liérganes does not disappoint the traveler. Of its mild climate, located as it is between two small Cantabrian elevations, there is no need to talk about it. It goes without saying. 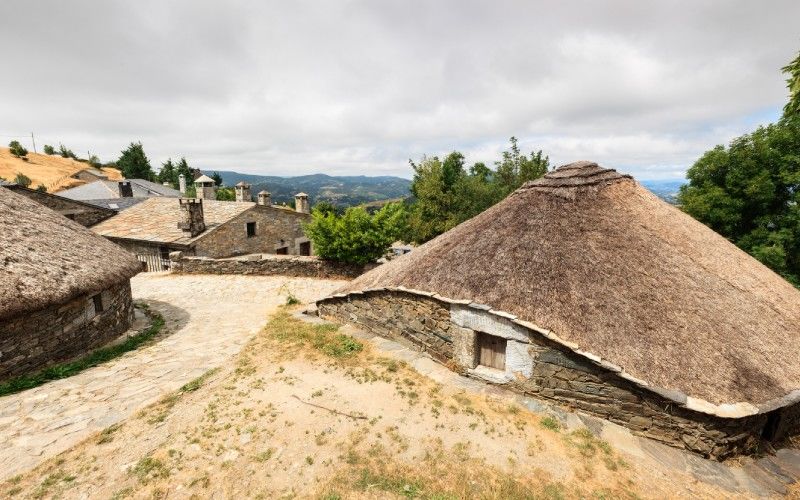 The province of Lugo has so many surprises for the traveler that it would be impossible to mention them all, but O Cebreiro can be presented as a summary of what awaits in this place where summer does not pass. In short, it does, but in a different way. With temperatures that do not invite so much to look for the beach as to discover and enjoy what is nearby. O Cebreiro is a village with history and authentic physiognomy, unique, with those traditional mountain pallozas that speak so well of the past of the place. Passage of the French Way of St. James, has ceased to be a secret to become one of the most visited Galician villages. With good reason.

Otsagabia, Navarra, a treasure of the North 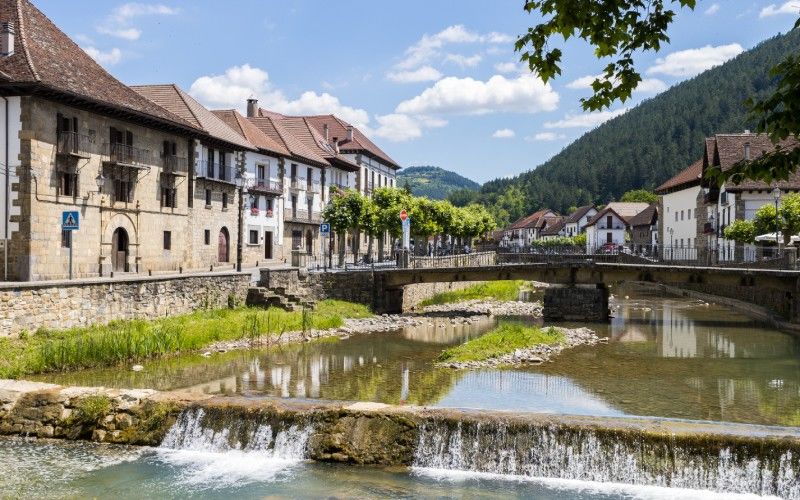 Otsagabia is one of the most interesting villages in Navarre. | Shutterstock

In the Pyrenean valley of Salazar, crossed by a river on which rests a beautiful medieval bridge, awaits the visitor the pretty village of Otsagabia. Considered one of the best examples of stately villages of the Navarrese Pyrenees, it offers the possibility of discovering part of the essence of a community that has for the visitor friendly temperatures and spectacular natural corners. For example, the famous Irati Forest. Of well-deserved fame, it should be added. Deep forests, high peaks and the option of resting in the shade of nature when the sun is at its strongest. You may be unlucky and discover Otsagabia on one of its hottest days, but it is unlikely. And even then it will be a rest. 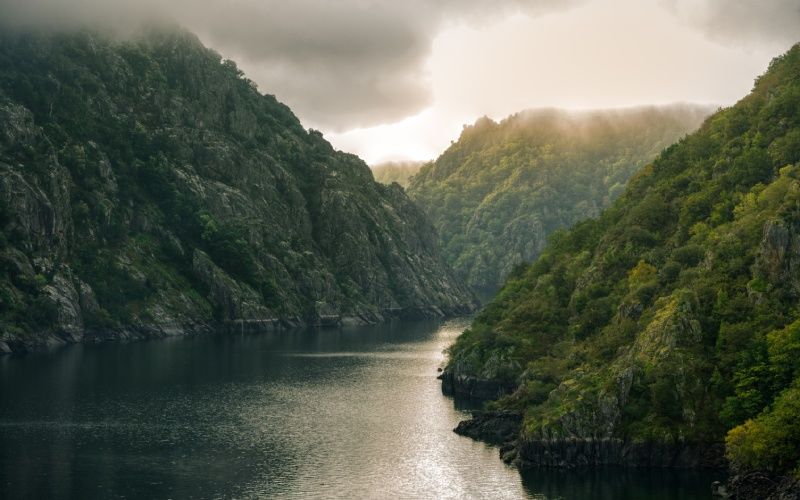 Visiting Parada do Sil is one of the best ways to get to know the Ribeira Sacra. | Shutterstock

The concello of Parada do Sil not only offers a very good climate in summer. It is also one of the most enjoyable places in Galicia. In the heart of Ribeira Sacra, a few days in Parada do Sil give to observe the canyons of the river from which it takes its name, monasteries such as Santa Cristina, which flooded in past centuries the chestnut forests typical of the area, or the many viewpoints that allow you to touch the Galician sky. It is an ancient and authentic area, which is reached after winding impossible curves that bring you as close as you can get, in summer, to paradise. Especially, of course, when the sun goes down.

Villafranca del Bierzo, León, a gem of the North 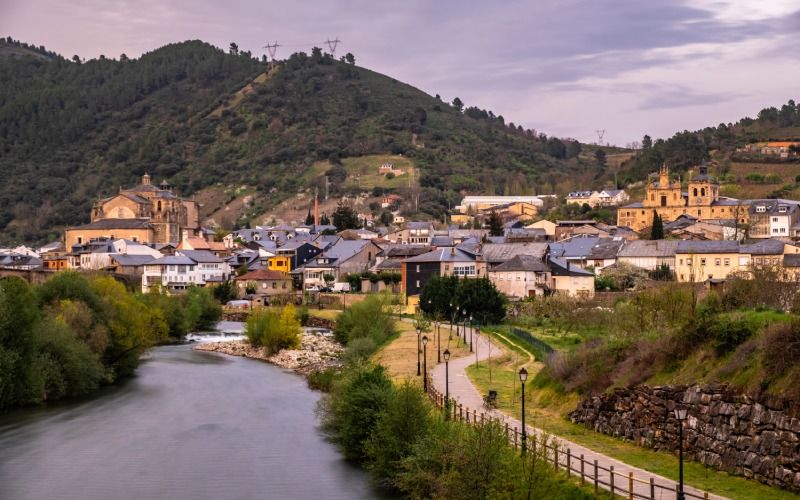 Also the province of León is an ally for those who want to escape the high temperatures and Villafranca del Bierzo can become the best friend. An important stop on the Way to Santiago, with a history of its own that you will enjoy discovering, it is the historical and spiritual capital of the region. Its medieval streets, which whisper at all times the great history of which they are served, await the visitor with mild temperatures that are not too much of a problem when discovering the many places that this place has.

ASTURIAS, cantabria, Cantabrian Mountains, Galicia, most beautiful villages, north
It may interest you...