Romanesque art was the true artistic movement that joined Europe in the cultural sphere. A style that was the great architect of the most representative monuments of some of the most emblematic regions of northern Spain. In addition to the north of Catalonia and Aragón, Romanesque art developed in great fusion in the north of the former kingdom of Castile.

And Palencia is undoubtedly a province full of Romanesque architectural treasures. Large and small, but all of them of great cultural significance and beauty. A province in which almost every village has its own treasure, more or less preserved, but still a treasure. However, there are some that stand out, either for their unique characteristics or for the spectacular landscapes in which they are set. 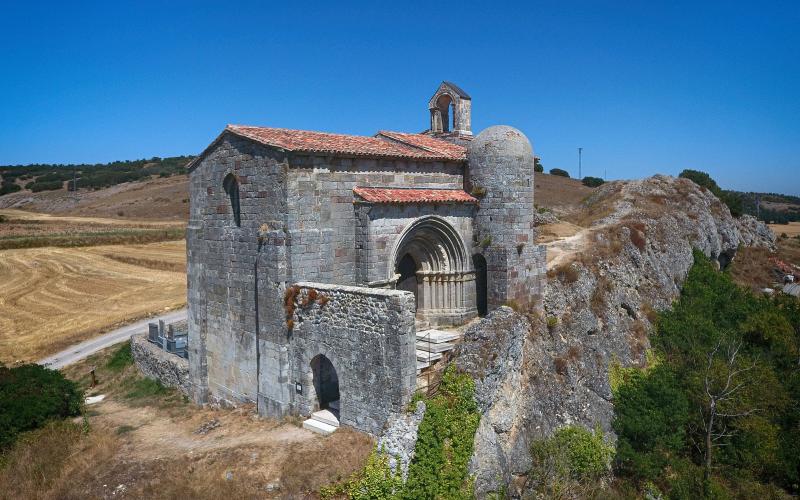 The beauty of the Hermitage of Santa Cecilia is unique. | Palenciaturismo

A temple of great interest located in a place that combines perfectly with the assembly of its ashlar masonry. The hermitage of Santa Cecilia is perched on the crags that populate this area of the Montaña Palentina, the region where Vallespinoso de Aguilar is located.

A small hermitage but with elements of great architectural value. Declared a National Historic and Artistic Monument in 1951, it underwent a careful restoration in 1958 that restored the temple to its splendour. It is a remarkable monument for the sculpture of its door, the triumphal arch and the harmony of the arches of the presbytery. The tower flanking the portico, which may have served as a watchtower, is surprising.

Church of Toremormojón with its stylised and sober Romanesque tower. | Wikimedia

Once watched over by the castle of Torremormojón, the Church of Santa María del Castillo has long since outgrown its former companion when it became part of the houses of the small village. Today, the church tower, the only original Romanesque remains, is surprising for its height and majesty in a somewhat remote part of the region. With its six sections, it has nothing to envy to that of Santa María la Antigua in Valladolid or that of San Esteban in Segovia. 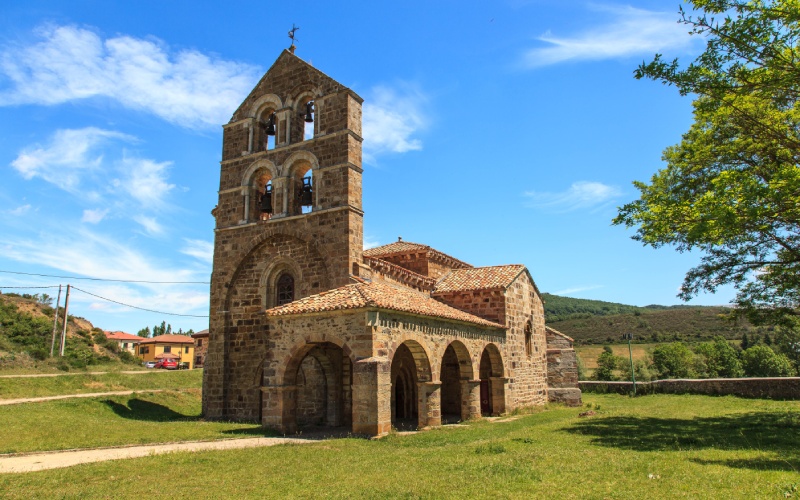 Collegiate Church of San Salvador, Romanesque between the 12th and 13th centuries. | Shutterstock

In the mountainous north of Palencia, very close to the Cantabrian lands of Liébana, San Salvador de Cantamuda has a small treasure. Its church of San Salvador is a redoubt of pure Romanesque with practically no later additions. With the exception of some works carried out in the 16th century, the church remains faithful to its almost ancestral roots. Its belfry stands out on the outside, typical of the region and with four openings. Inside, in addition to the harmony of the whole, the altar table stands out, made up of seven small columns, all of them different and unique. 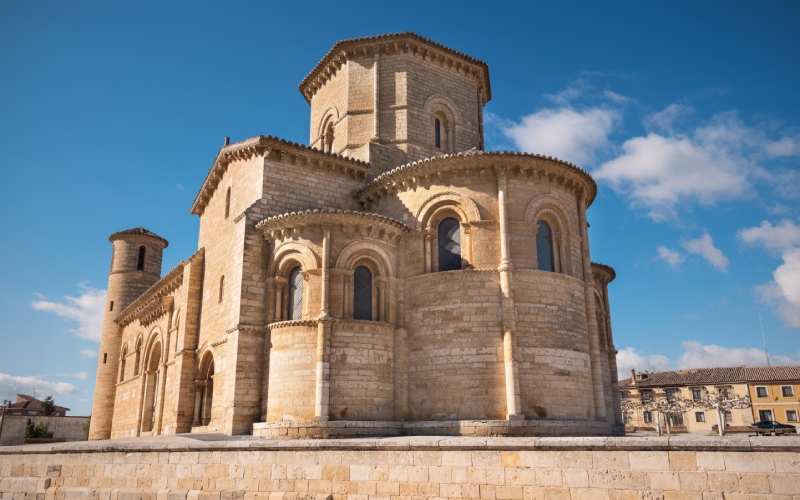 One of the landmarks of the French Way, Church of San Martín de Tours. | Shutterstock

Undoubtedly one of the stars of Romanesque architecture on the peninsula and on the French Route. Archiconocida, the church of San Martín de Tours is one of the masterpieces of the full Romanesque along with the Cathedral of Jaca or San Isidoro de León. The church was extensively remodelled at the end of the 19th century, when an attempt was made to restore the temple to its original state.

Throughout its history it suffered additions that weakened the structure, to such an extent that worship inside it was forbidden. On the outside, the most notable elements are its corbels with figures of gargoyles and grotesque beings that bear witness to the passage of time in this place.

Temple-fortress of Villalcázar de Sirga, a church of the Order of the Temple. | Shutterstock

Being one of the most remarkable medieval temples of the Camino in Castile and León, Santa María la Blanca surprises with its huge proportions. It is without a doubt a beautiful jewel of Romanesque art. The church is a mixture of late Romanesque and Gothic, and its forms and intentions are blurred between these two consecutive movements. Severely damaged by the Lisbon earthquake of 1755, the monument lost its western façade, which was subsequently somewhat crudely walled up. It is its southern façade that leaves one speechless with its friezes and archivolts generously adorned with biblical passages. 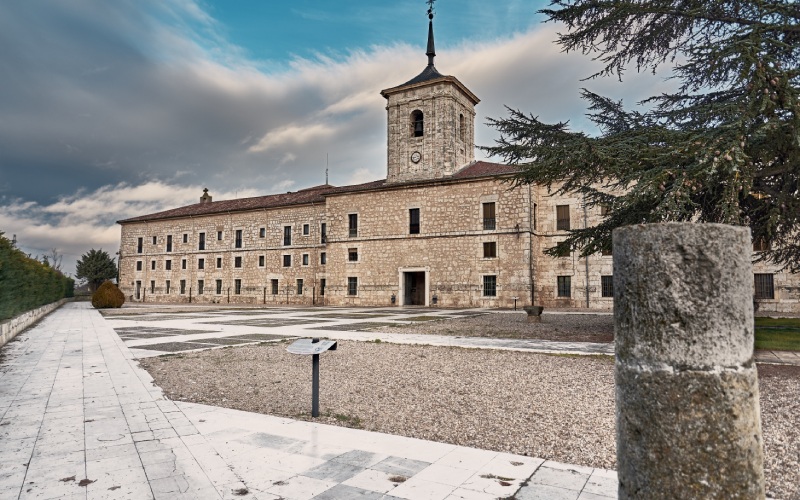 The Abbey of San Isidro de Dueñas has undergone remarkable modifications that have changed its original appearance forever. As is the case with most of the monuments on this list and even the rest of the Spanish Romanesque. Herrerian in its 18th century shell, the structure still respects part of the original Romanesque layout. Its tower and main entrance can still be seen, as well as some of the capitals inside, witnesses to its Romanesque past. What stands out most about the place is its setting and the peace that can be breathed within its sober walls. 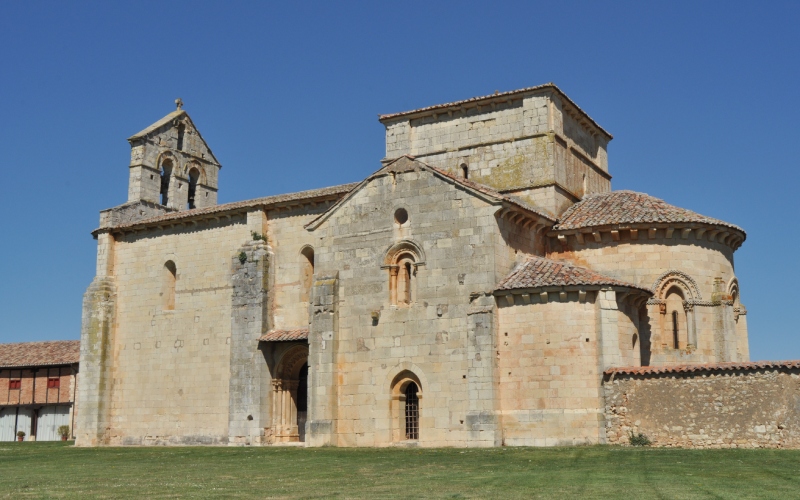 Built on a single nave, the church of Santa Eufemia is the only evidence of the existence of the Monastery of Cozuelos to which it belonged. It is a special place in which to carefully contemplate the decorative elements of the capitals, archivolts and windows. The harpies, plant and geometric elements give the visitor the opportunity to wander among myths and ornaments inherited from Visigothic art. Another jewel of Romanesque art. 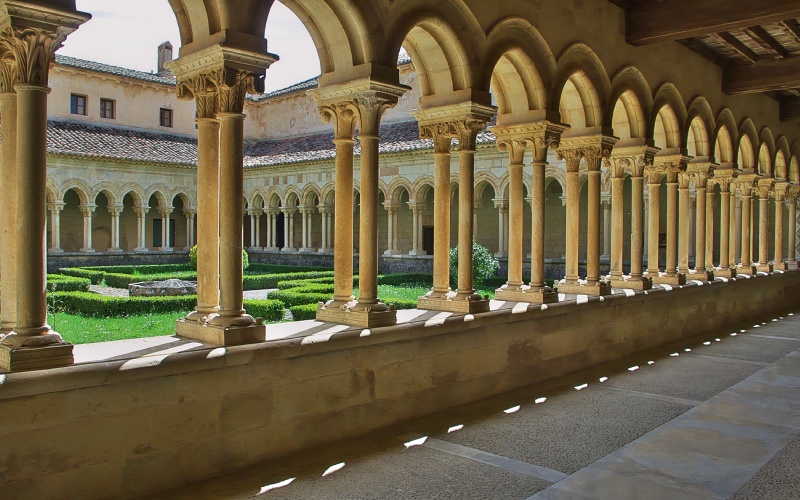 Known simply as the Monastery of San Andrés de Arroyo, the complex offers an admirable neatness in its forms and state of conservation. It is a place that shows the determination of the architects and artists of the time, overcoming the difficulties and impositions of Cistercian architecture.

The Cistercian order shunned sumptuousness and adopted austere ways of life and art, devoid of superfluous and unnecessary elements. Despite this, many precious late Romanesque elements can be seen in this monastery, remnants of a style that was approaching extinction.

Church of San Cebrián de Mudá with its Romanesque belfry dominating the view of the village. | Shutterstock

Between Cervera and Aguilar de Campoo, San Cebrián de Mudá can be seen from afar thanks to the belfry of its church, dominating the centre of the village on a small promontory. Extensively transformed in the 15th century, its hallmark, the belfry, is still a reminder of the Romanesque past of the small church.

In addition to the capitals and corbels as well as the archivolts of its original doorway, the Baroque paintings inside are of great beauty. Hidden behind layers of lime and altarpieces, they were discovered in 1969, revealing a very complete set of frescoes telling biblical scenes and effigies of holy martyrs. A great discovery that changed the understanding of this humble temple of the Montaña Palentina. The Romanesque art has many representatives, but perhaps these are some of the most beautiful of Spain.

churches, fromista_lx, monasteries, Palencia, Romanesque
It may interest you...