The Lakes of Covadonga are the perfect place to relax in the middle of nature. Located in Asturias, within the Picos de Europa National Park, they are surrounded by some of the highest mountains in the Cantabrian Mountains. Together they make up a worldwide renowned scenery. The city sights are soon left behind and a landscape where the sky and the earth seem to come together welcomes the traveller. During the ascent you can easily find cows grazing, as well as golden eagles or Egyptian vultures.

It is worth enjoying this enclave personally, the fresh air at an altitude of over 1000 metres, the intensity of the colours and the reflection of the clouds on the waters of the Enol and Ercina. The winter snow is the mother of lakes, which could well have been imagined in a legend told by the fire. It is easy to get away from the noise of traffic and the hustle and bustle of the city. Here, the wind seems to carry and bring the silent conversations of the Xanas. Here, the water can take you, holding your breath, to a past full of secrets only known by the mountain peaks. 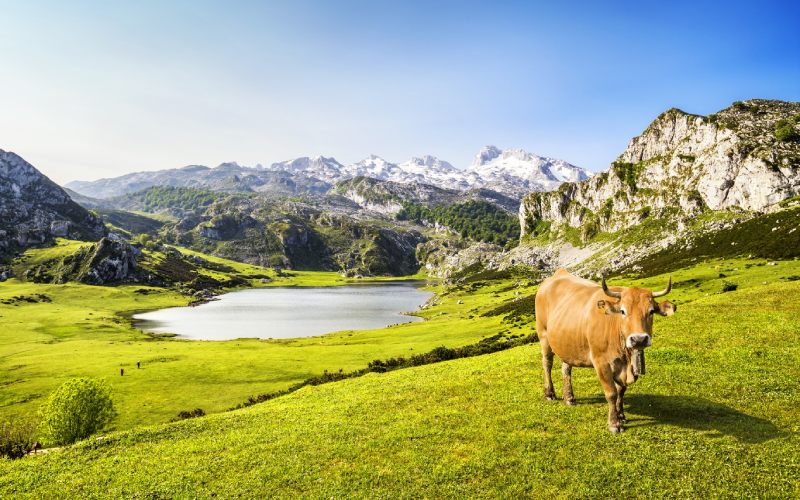 A place where nature speaks

Situated 21 kilometres from Cangas de Onís, the Lakes of Covadonga are located in the Cornión massif, the most western of the Picos de Europa. Within the National Park that bears that name, they form a natural complex of extraordinary beauty. In the middle of this green lung of northern Asturias, these two lakes of glacial origin, Enol and Ercina, are born. And in the rainy season, you can also see the Bricial, the result of mountain melting.

To get there, you must climb up a winding road from Covadonga. The route enters the centre of a natural space where the minutes fly like birds of prey in the sky. A landscape that seems to be painted in watercolour surrounds the narrow paved ascent. Lush forests, valleys and rocky gorges, the result of the erosion of rivers and glaciers, characterize this National Park, a precursor in Spain and one of the first in Europe. In 1918, under the auspices of Pedro Pidal, the Covadonga National Park was created. This was the central axis of what later became the Picos de Europa National Park. A world example of nature conservation and protection. 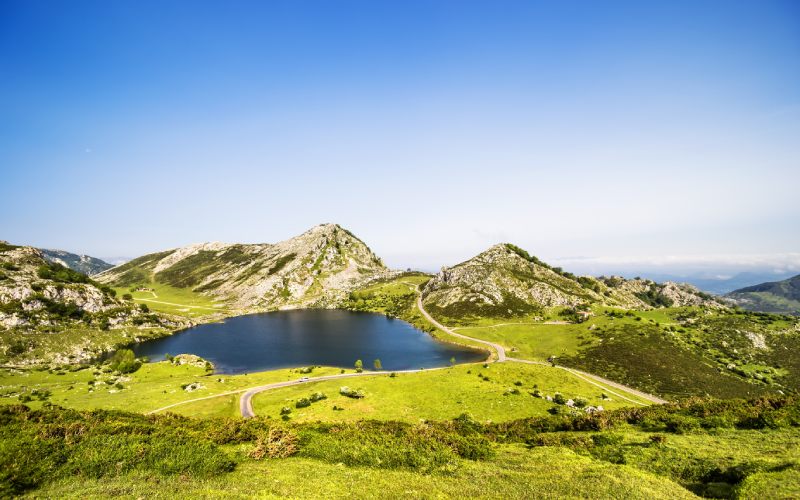 These livestock and pasture lands offer the possibility of walking among oaks, chestnuts and hazelnuts, in a climb to higher areas. It goes from 70 meters above sea level in Cangas de Onís, to more than 1000 meters where the lakes are located. The land is first scarred by fences that limit the movement of livestock. As the climb continues, the landscape changes and the terrain becomes increasingly bare. At about 900 metres the view is already impressive. You can see the Cantabrian Sea in the background, preceded by valleys that flow, undulating, to the coast.

Soon spies appear among the clouds. Griffon vultures, eagles, woodpeckers and, of course, the bearded vulture, under the protection of the Foundation for the Protection of the Bearded Vulture that feeds them weekly. Further up, in the lakes, the beeches are the protagonists. Framing the picture, the limestone walls, moulded by a millenary karstic process. Here you can see the footprints of the water on its way to the formation of the Lakes of Covadonga.

King Pelagius, between legend and reality

To talk about Covadonga, the Lakes and their sanctuary is to talk about Pelagius. Having become a mythical hero, some texts place him in Toledo, years before his triumphal, and alleged, battle. There, tradition tells us that he hid the Ark of the Covenant. Little is known about this character with certainty, but a still recent Spanish founding legend has been composed around him. Thus, the first Asturian monarch is attributed with multiple heroic episodes, almost all of which are considered legendary. 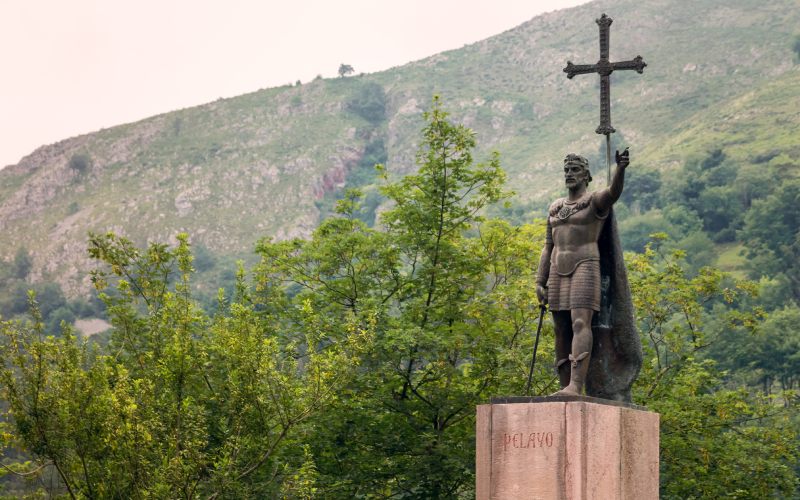 According to tradition, Covadonga was the scene of a great battle in which the king and his soldiers managed to defeat a much larger Arab army. There, after a time plagued by skirmishes and small popular revolts, the final confrontation was born. The timely assistance of the Virgin on Mount Auseva ended with the expulsion of the Arabs. In this way, the origin of the reconquest would have been born, which would extend over the centuries throughout Spain.

Covadonga, much more than the lakes

Approaching the area of the Lakes of Covadonga and its vicinity means much more than knowing the wonders of this natural enclave. Walking through the mountains, discovering routes or chasing local legends among the trees are just some of the alternatives. But there are many more options to explore. No opportunity should be missed in this location where the symbiosis of spirituality, nature and history is felt every step of the way. 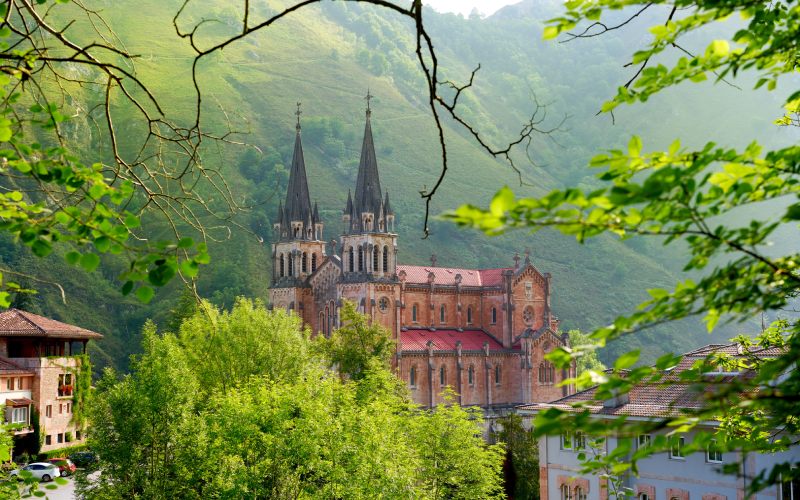 A clear example is the Santa Cueva de Covadonga. It is said that it was in this cave on Mount Auseva that Pelagius and his men entered in pursuit of a bandit. The Christian legend tells that there they left an image of the Virgin Mary to ask her protection or to honour her after the victory. The first chapel on the site was built by order of Alfonso I, Pelagius’ son-in-law. Today it is said that his remains rest next to an image of the Virgin of Covadonga. The truth is that it is impossible to know what really happened. Nevertheless, the place is frankly evocative.

The tradition of Marian worship continued to be deeply rooted in the place and its people despite the destruction of the old temple. That is why the pink and majestic Basilica of Santa María la Real was built on the Cueto hill. Of Romanesque style, it is composed of three naves, the central one a little higher. On the high altar rests an image of La Santina (The Virgin), which the devotees visit, fulfilling a pilgrimage. It is worth looking at the bronze Pelagius, who guards the exterior of the church, directly. Here you can also find the Victoria Cross, which represents the beginning of the first Christian kingdom of Spain. 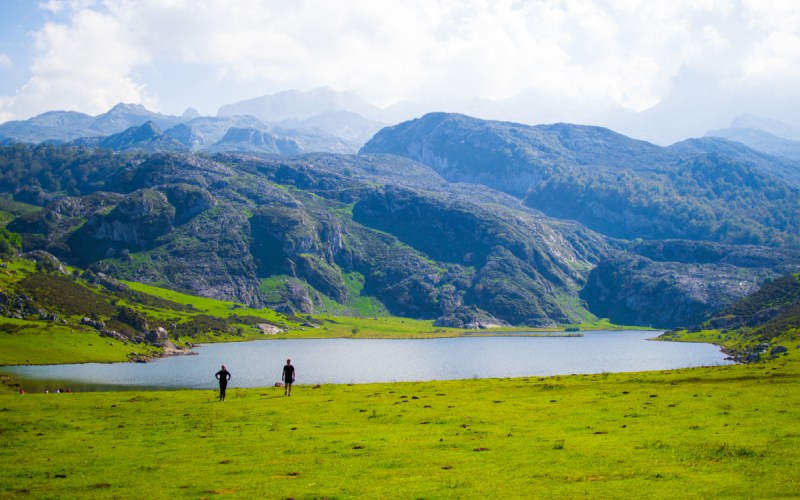 Beautiful scenery with the Ercina Lake in Covadonga. | Shutterstock

On the left side of the Basilica is the collegiate church of San Fernando. Its austere appearance contrasts with the pink limestone of the temple walls. Arches and balustrades adorn this building, which houses the tombs of its abbots, dating from the 11th century. There is still much to see in the surrounding area. The monastery of San Pedro, which serves as the home of a canonical community. And, the stairway of promises, which perhaps miraculously, still stands. You almost want to cover your ears when you see La Campanona, three metres high and weighing five tonnes, eager to tell its interesting story. As the icing on the cake, a pleasant walk in the Parque del Príncipe will serve to relax among its Atlantic greenery, next to the river Covadonga.

Lakes of Covadonga, an area of routes and viewpoints

In the Lakes of Covadonga you can do different routes, even walk freely in the area. But to be sure that nothing is left undiscovered, one of the most chosen walks is the circular route to the Lakes of Covadonga. Its difficulty is low, it is more or less 5 kilometres, through areas where children can advance without problem. You must take the PR.PNPE-2 path, next to the Pedro Pidal visitor centre. Next to the Buferrera car park, you will take the first steps, still on plain. But soon begins the ascent that leads to El Príncipe Viewpoint, which receives the walker as a promise of everything that his eyes are going to contemplate. 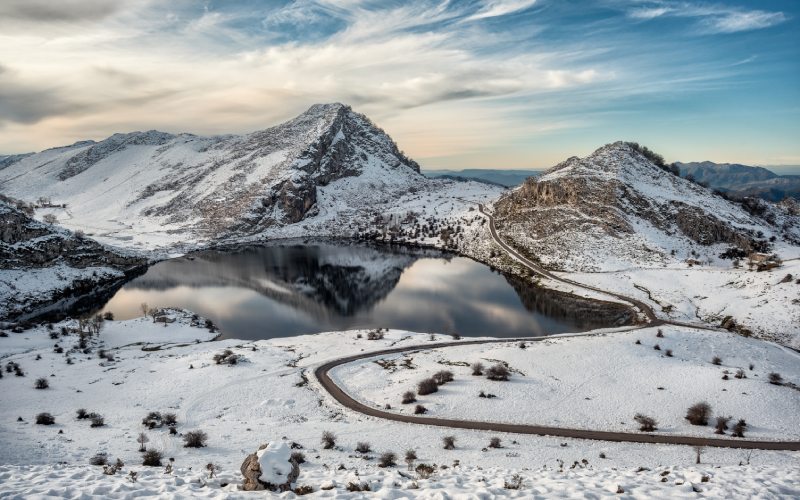 The signs lead to an amazing environment, the old mine of La Buferrera. Still equipped with tracks and wagons, it invites you to penetrate the rocky bowels. Then, at an altitude of 1100 metres, one of the most eagerly awaited postcards appears. It is Lake Ercina with the Picos de Europa mountains in the background. Further up, the Entrelagos Viewpoint opens up before a spectacular photograph. With the Ercina on the left and the Enol on the right, the image calls for peaceful enjoyment.

Then, it only remains to rest for a few moments and continue, closing the circle of this Asturian route, until you reach the starting point again. Once again on the way, the road that goes up to the lakes also invites you to stop at a third viewpoint, that of Los Canónigos. From there, stealing a few minutes on the way down or up, you can calmly see the sanctuary; surrounded by the silence of the mountain. Then, the descent, with the certainty that what you have seen will be difficult to describe in words. Here nature is the one who speaks and the visitor is the one who listens.