Castile and León is a beautiful region, with beautiful villages to walk around in peace and quiet and amazing capitals full of life, culture and historical monuments to admire. It also has many natural landscapes capable of leaving any traveller speechless.

Made up of eight provinces, each with its own history and colour, Castile and León is an ideal option for any type of person. A detailed look at some of its most emblematic spots will help you understand why, centuries later, it is still the heart of the country. These are 9 lovely places to get to know Castile and León.

Las Médulas, a surprising landscape from the Roman past 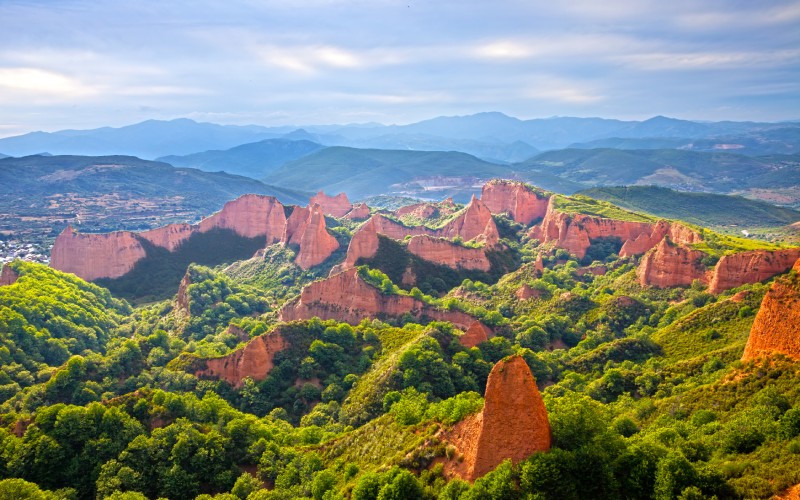 This small region located in El Bierzo, León, was declared a World Heritage Site by the UNESCO. It is not only a place with some of the most spectacular landscapes that it can be discovered in all Spain, but also an example of the historical past that surrounds this area, still unknown.

Las Médulas, those curiously shaped mountains, were gold mines exploited by the Roman Empire more than 2,000 years ago. Once again, the Romans left their mark on the peninsula, and this time in a very curious way. For more than 200 years, they created their own system to exploit these gold mines. This system consisted of making the mountains explode thanks to the pressure of the water in order to ease the collection of gold dust. So, these mountain shapes are nothing more than the result of men’s action on nature. And it is impressive.

The castle of Ampudia, a vision of the past 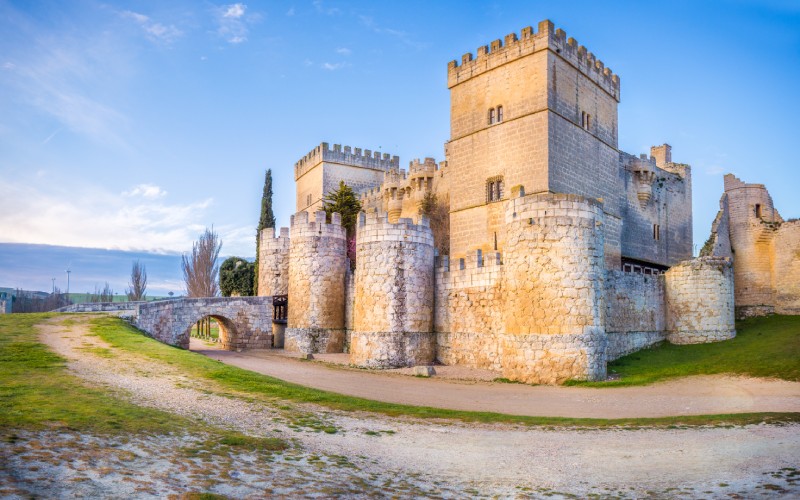 The castle of Ampudia offers a regal appearance | Shutterstock

Castile is a land of castles, of course. One of the best examples of what they once were is found in Palencia. Built between the 13th and 15th centuries following Gothic precepts, the castle is in an almost perfect state of conservation. The only thing missing is a fourth tower, which collapsed during work at the beginning of the last century.

Since it was recovered in the 1960s, an excellent restoration work has been carried out. This allows us to admire them and remember what they once hosted. Many important historical figures have had their residence here. Now, the castle of Ampudia houses a large number of antiques with which visitors can learn more about the rich past of this land.

Las Merindades, a delight for all five senses 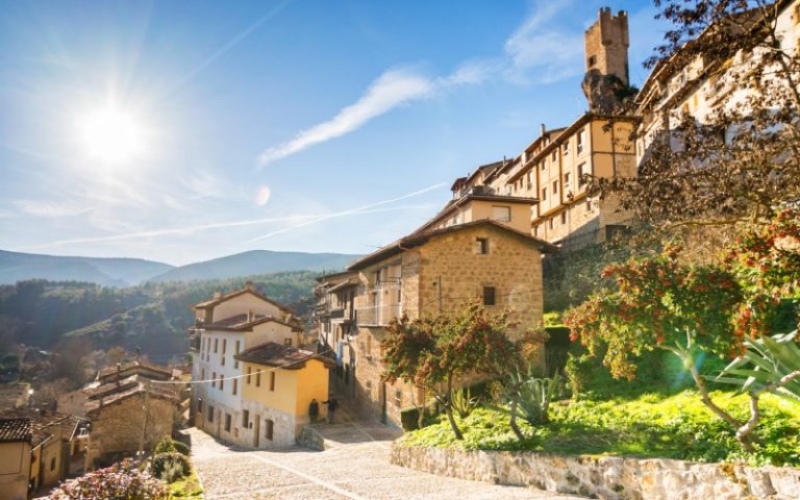 Frías, one of the villages to be discovered in this region | Shutterstock

This region in the north of Burgos has as many surprises, as you can imagine. It should be explored and discovered at your own pace, leaving your map and phone at home. Las Merindades is home to such spectacular natural surroundings as the Angulo Valley, where the Peñaladros Waterfall is. There are also villages such as Orbaneja del Castillo, literally divided by another waterfall.

Gastronomy is an important aspect when it comes to this particular region, as well as the history that can be found at every step. In addition to the usual Castilian Romanesque architecture, there is an impressive collection of Palaeolithic remains. Especially, in the caves of Ojo Guareña. Las Merindades form one of the most valuable corners of the peninsula. 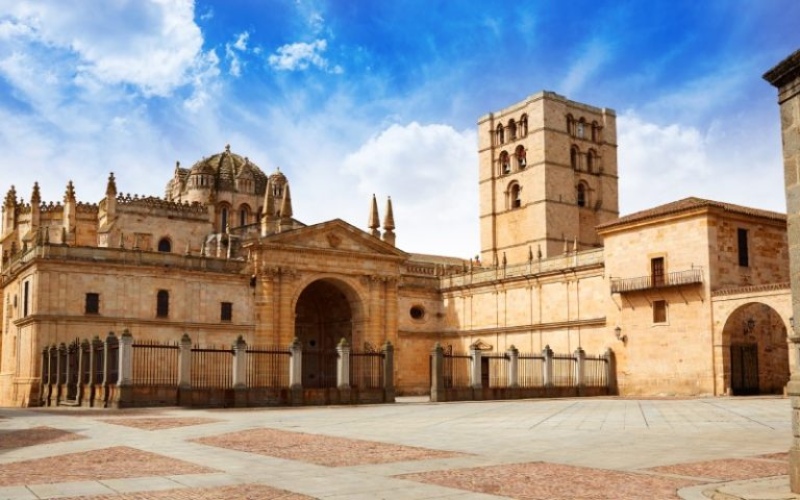 Zamora’s cathedral, one of the smallest and most remarkable ones | Shutterstock

The churches of Santa María Magdalena, Santa María La Nueva, San Claudio de Olivares, and San Cipriano, located next to one of the most beautiful viewpoints in the city… And many others. Zamora Cathedral, which has watched over the city from its highest point since the 12th century. And the castle, which has stood since the 11th century. All this is the living image of the most authentic Romanesque style. And they are all in the capital of the province and form a perfect route for those who want to enjoy this style.

With its large buildings, its twenty churches, chapels, and walls, Zamora could perfectly well be considered the world capital of Romanesque architecture. But one cannot forget the importance of the Duero river, its Roman past or the tapas in the Zona de Lobos and Calle Herreros.

Urueña, culture and history in one of the most beautiful villages in the region 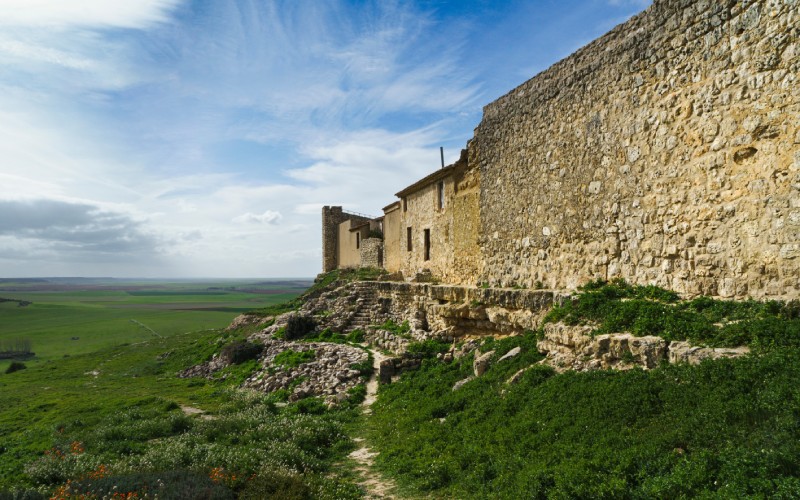 Behind the wall of Urueña, ‘wide is Castile’ | Shutterstock

Urueña, located halfway between Valladolid and Zamora, although belonging to the former, is a fantastic example of what a Castilian village is. Declared a Historic-Artistic Site in 1975, it has preserved in the best of ways its walled complex from the 13th century. Its castle, built two centuries earlier, is also in a good state of conservation. On the horizon of the village, countryside and more countryside. Castile is wide.

Urueña, apart from its priceless medieval atmosphere, has recently become a town for culture. First Book Town in Spain, literature lovers will have the opportunity to discover in its streets a dozen of bookshops whose aim is simple: to encourage reading. 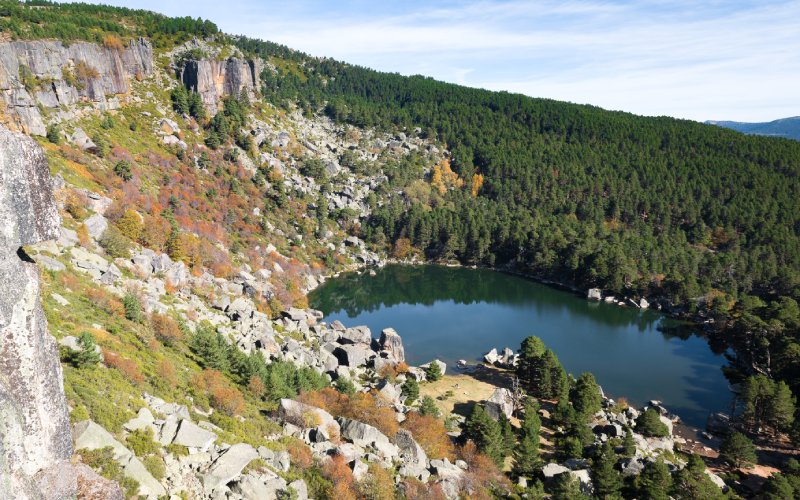 In recent years, the Laguna Negra has attracted the attention of many people | Shutterstock

Much has been said about the Laguna Negra in Soria, but all fame is deserved when it comes to this spot. Just 50 kilometres from the capital, located at an altitude of 2,000 metres, this place is one of the most beautiful in the region. This lake of glacial origin has many legends.

It is not just the dark waters that impress you, the surroundings of the lake itself are also a jewel. A pride of Soria. The ascent to Pico Urbión leaves a fantastic taste in the mouth. In other words, this fascination may be born in its waters, but it extends to the surrounding area. It is a must in Castile and León.

The Sierra de Francia, perfect to lose yourself among dreamy villages 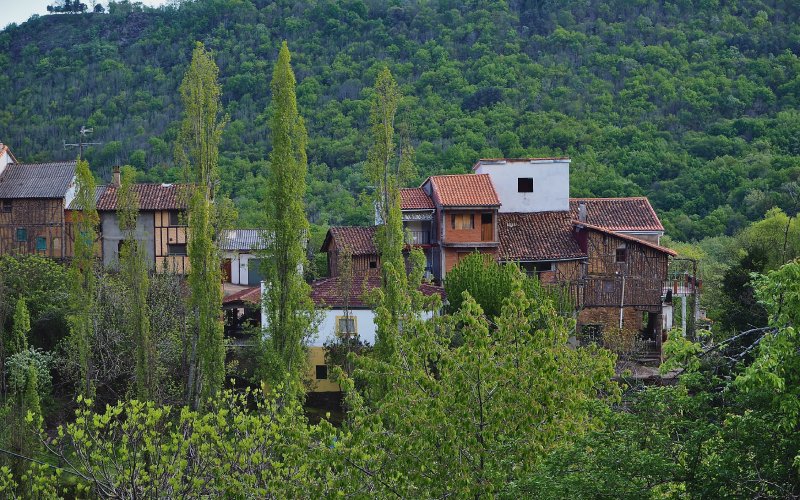 This region located in the south of Salamanca has a gift for the traveller. Fairytale villages with their own architecture, surrounded by mountains and hiking trails. The green forests accompany part of the journey, and the water areas surprise from time to time. The feeling of suddenly finding yourself in another place invades at all times. Is this Salamanca? Yes, this is Salamanca.

The Sierra de Francia, in recent times, has received more attention than it has ever had in its history, but it has always been there. The Virgen de la Peña de Francia can tell, which has received so many pilgrims over the centuries. With those picturesque villages that one can be either to rest, or to turn them into the starting line of an adventure in nature. Either way, this region will feel like a very special place. 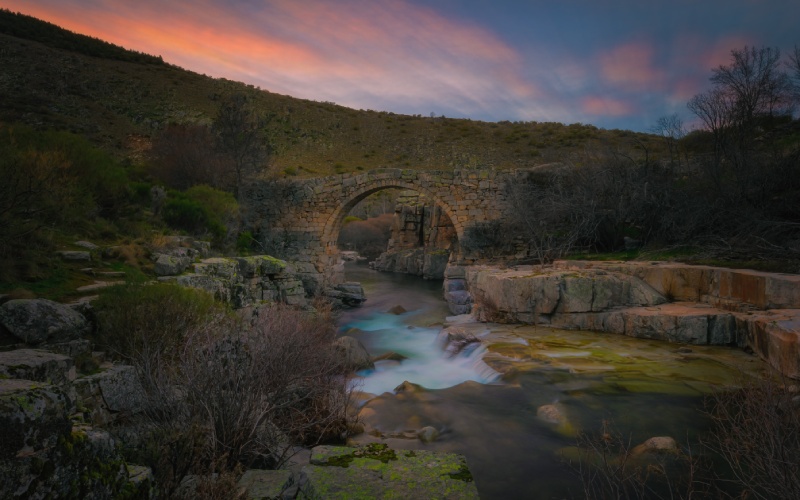 A medieval bridge awaits in this beautiful corner of Ávila | Shutterstock

You get the feeling, when you are on the Pozo de las Paredes, that few images could be more Castilian. This small pond framed in great beauty corresponds to the most popular image of a Castilian landscape. In this sense, we must insist: what beauty. It is in Ávila.

The clear water and the environment close to the mountains have made this spot one of the most popular of Ávila. Visitors come every summer to bathe in the crystal-clear waters. However, a word of warning: you have to be Castilian to dare, because the waters are cold. From Pozo de las Paredes you can also access the Sierra de Gredos mountain range, which completes any tour. 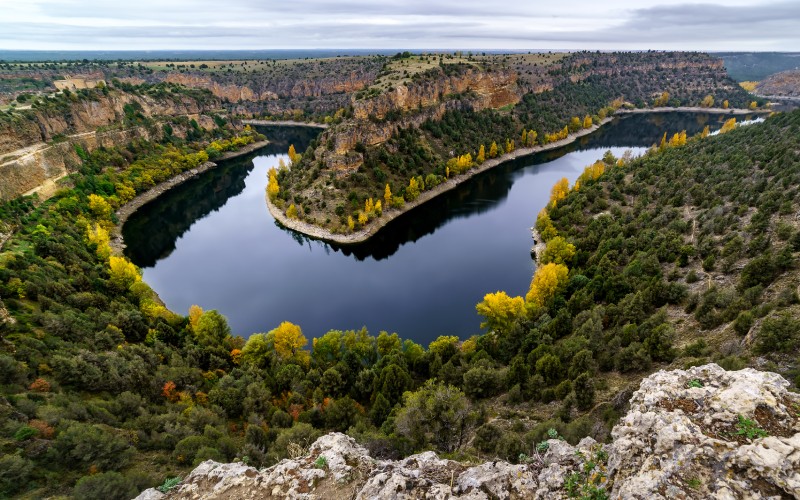 The Hoces del Río Duratón Natural Park is a protected area, where flora and fauna play a fundamental role. Not only in the value that has historically been given to this corner. But also in the play of colours, smells and sounds that you experience when walking. Or when taking a canoe and observing, from the water, the impressive walls formed in the middle stretch of this popular river, with vultures hiding in its corners.

The Hoces del Duratón are a treasure. A Segovian treasure. Around them, Sepúlveda and other similar villages offer visitors the charm of the past and the gastronomic wealth of the province. The Ermita of San Frutos should crown all visits, because from its ruins you can enjoy spectacular scenery.

Castile and León, most beautiful villages, nature, Romanesque, World Heritage Site
It may interest you...