We can highlight 9 of these mountain villages in Cantabria where you can spend the day, take lots of pictures and do a bit of sightseeing as well. Maybe even stay for a longer. In addition to Santander and some incredible beaches, Cantabria is a region with a lot of mountains where there are many villages full of charm and spectacular landscapes. 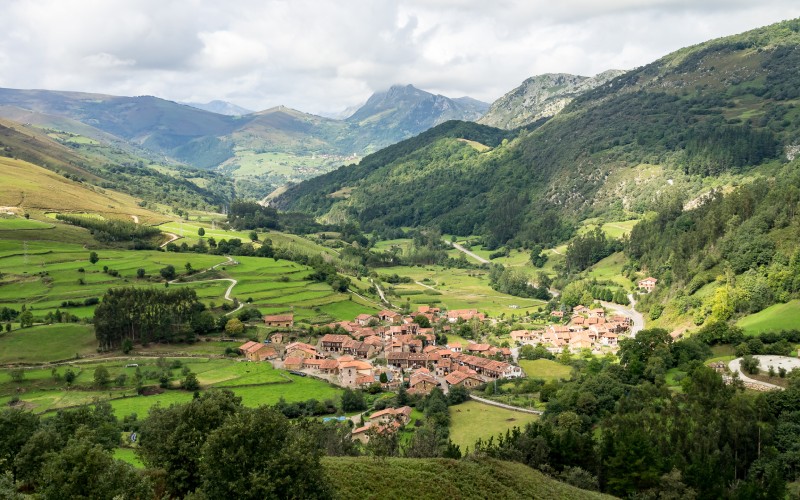 Carmona is one of the most beautiful villages in Cantabria for several reasons. First, it has a privileged location, as it is in the middle of the Cabuérniga Valley and very close to the river Nansa. Thus, it allows you to see landscapes of different shades of green that are truly incredible from any point in the town.

On the other hand, its architectural heritage, with its mountain-style mansions and wooden balconies, is so well preserved that it has been declared a Historic-Artistic Site. As for its people, they are dedicated to livestock farming and wood craftsmanship, especially in the manufacture of footwear called albarcas. It is, in general, one of the most beautiful mountain villages in Spain. 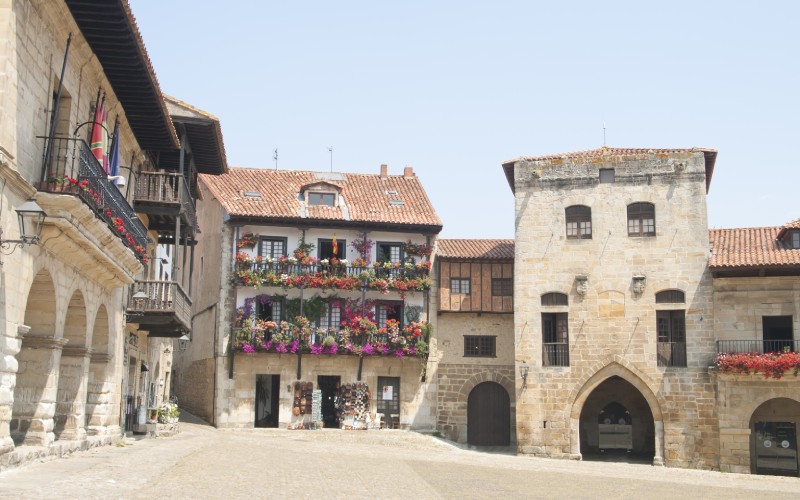 Santillana del Mar is one of the most famous villages in the region. Some of the most outstanding monuments in this town are the Collegiate Church of Santa Juliana, the Palace of Mijares and the Palace of Viceda. It is always a good idea to take advantage of your visit to taste the local gastronomy.

However, there is one place on the outskirts of the village, a couple of kilometers away, which stands out above the rest: the Altamira Caves. In this cave, whose Sala de los Polícromos has been declared a World Heritage Site, you will find cave paintings that are between 14,000 and 16,500 years old. Although the original cave is not open to visitors, the Neocave in the Altamira Museum is open to the public. 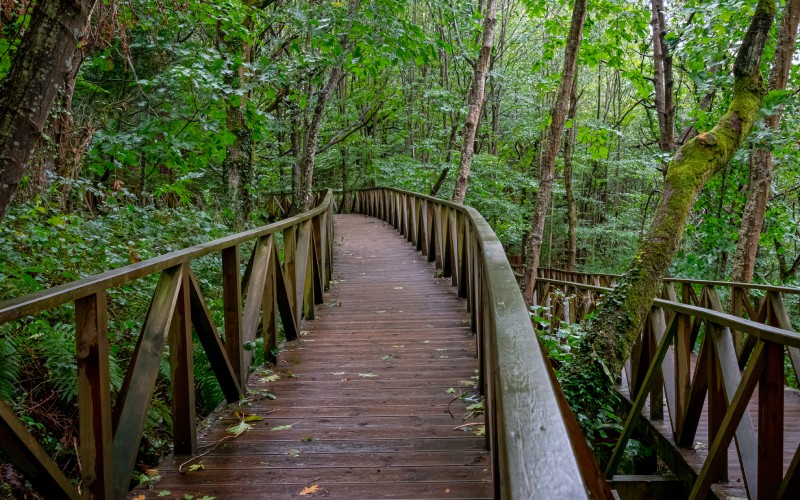 As you can imagine from the name of the village, Cabezón de la Sal is a town that has historically been dedicated to the extraction of salt. As for its heritage, its most outstanding buildings are the Casa-Palacio de Carrejo and the Church of San Lorenzo.

Also, it is important to mention the prehistoric site of Cabrojo, with sandstone engravings dating from the Bronze Age. Regarding nature, it has a very interesting location for hiking enthusiasts. It is right in the heart of the Saja-Besaya Nature Reserve and just three minutes from the National Monument of the Sequoias. 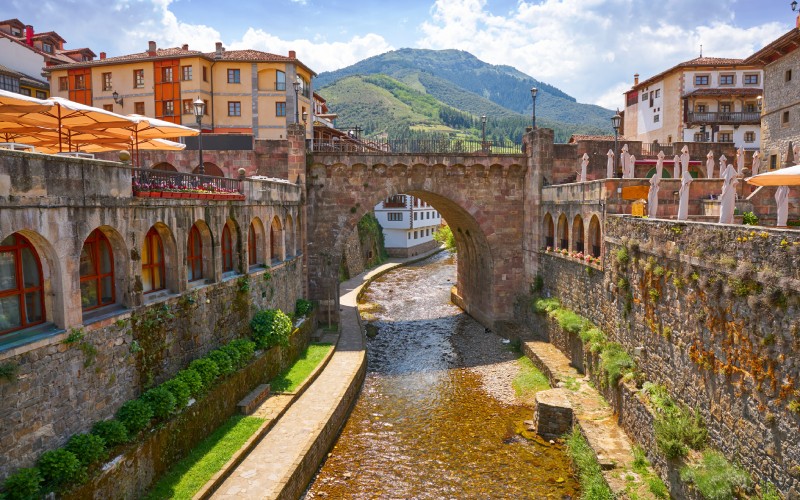 Potes is known for being the place where the medieval fights between the Mendoza and Manrique families took place. Moreover, it is located right at the point where the rivers Quiviesa, Deva and Bullón meet and in the middle of the four valleys of the region.

It is a village full of medieval buildings, such as the Torre del Infantado, the Torre de la Lama, the Puente de San Cayetano and the Puente de la Cárcel. In recent years it has grown economically due to the great amount of tourists who visit it to lose themselves in its cobbled streets. 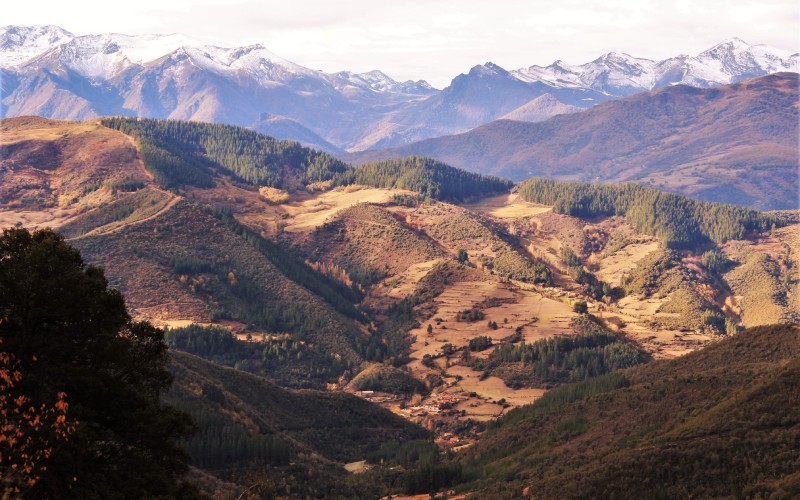 Views of the Picos de Europa from Cahecho. | Shutterstock

With a population of just 49 inhabitants, Cahecho is not one of the most famous villages in Cantabria, but it is a place well worth a visit. Its views are so incredible that it is known for being the viewpoint of the Picos de Europa, making it an ideal place to take pictures.

As for its heritage, it is a very picturesque town full of stone and wooden houses. Its most outstanding monument is the 16th-century Gothic church of Nuestra Señora de la Asunción. Cahecho is undoubtedly one of the great destinations for a rural tourism getaway in northern Spain. 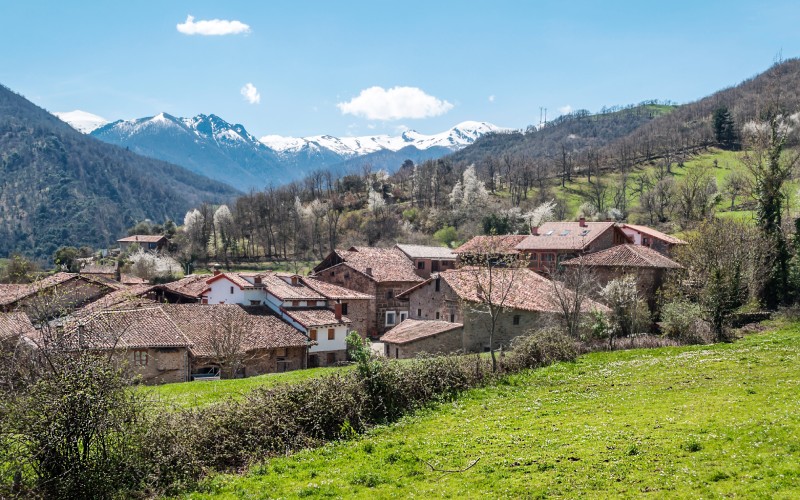 Mogrovejo has been declared an Asset of Cultural Interest and Historic Site. This is due to its ashlar and masonry houses with wrought iron balconies, which make this one of the most picturesque mountain villages in Cantabria. Monuments worth a visit include the Tower of Mogrovejo and the Church of Nuestra Señora de la Asunción.

Such is the charm of this mountain village that the film Heidi was filmed here. For this reason, since the year of the filming, 2016, Mogrovejo has been known as Heidi’s village. It also was part of The Most Beautiful Villages of Spain in 2020. 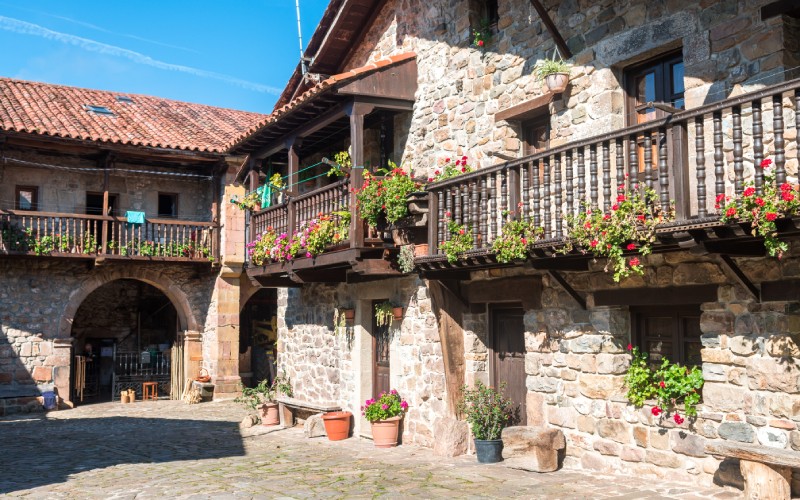 Located within the Saja-Besaya Natural Park, Bárcena Mayor not only stands out for the nature of its surroundings, but also the village itself has been declared a Historic-Artistic Site. Cobbled streets, rustic and traditional architecture and an old farmhouse are some of the elements that can be seen on a stroll through this pretty town.

Since 2015 it has been part of the select club of The Most Beautiful Villages of Spain, and it is no wonder given the excellent preservation of its houses and its balconies full of flowers. It is also a good place to try its  famous mountain stew. 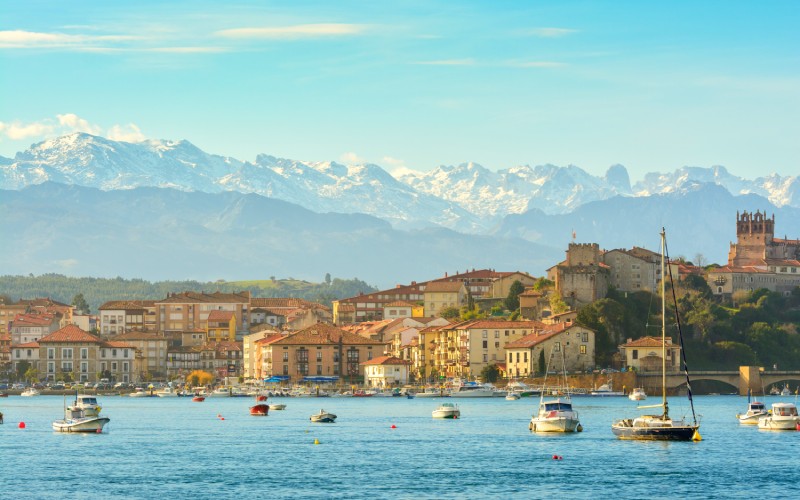 San Vicente de la Barquera is one of the few towns in Cantabria where you can take a picture of the sea and the mountains at the same time. The perfect combo for the undecided or for families who can’t agree about where to go. Furthermore, it is located in the Oyambre Natural Park, with landscapes that will remain in the traveller’s memory forever.

It is a coastal town with a great popular tradition and an old town, in which the Gothic church of Santa María de los Ángeles and the Puente de Maza stand out. As for beaches, Barnejo-Berrellín is the best known, only ten minutes away by car. 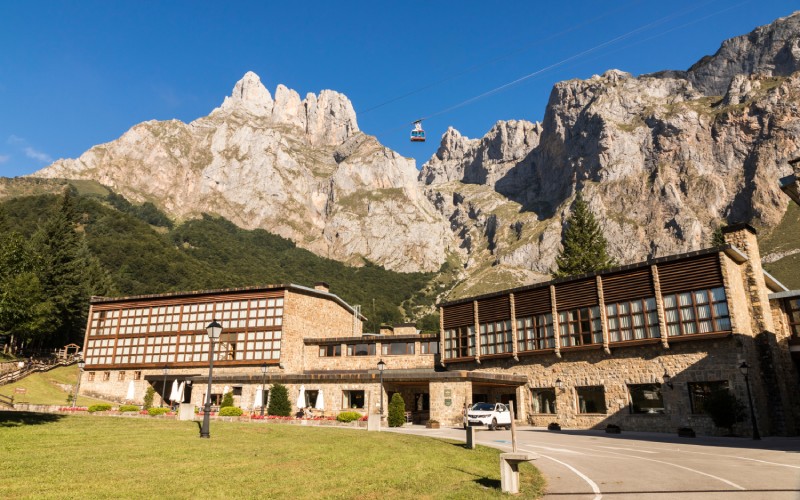 Last but not least, we must mention Fuente Dé, a village with only 7 inhabitants. And what is so interesting about such a small village? Well, it is in the middle of the Picos de Europa and from there a cable car takes you up to a height of 753 metres.

The journey takes about three and a half minutes. The views from the top of the cable car are breathtaking. Once there, it is up to you to decide whether you want to stay and contemplate the scenery or take one of the many hiking routes available. It is one of those mountain villages in Cantabria that is well worth a visit.