Hidden among the nature of Calpe, facing the Mediterranean Sea is one of the most fascinating buildings not only in the Valencian Community, but also in the whole Peninsula. The Muralla Roja (red wall), a housing complex designed by the architect Ricardo Bofill, has become one of the most talked-about topics in this place since its construction. Throughout history, it has been the subject of equal parts controversy and recognition.

Influenced by North African styles and Arab essence, the Red Wall breaks with the rest of the surrounding buildings for its risky and striking range of colors. Also for its shapes, which, playing with geometry, manage to elaborate a whole labyrinth of bridges and stairs. All this has made it one of the most sought-after scenarios today for artists or social media influencers.

Its author, Ricardo Bofill, wanted to represent in this design a strong Arab influence while providing the postmodernist techniques of the time. The result was a building that does not go unnoticed and that, in recent times, has put the Calpe coast in the spotlight.

The groundbreaking architecture of the Red Wall 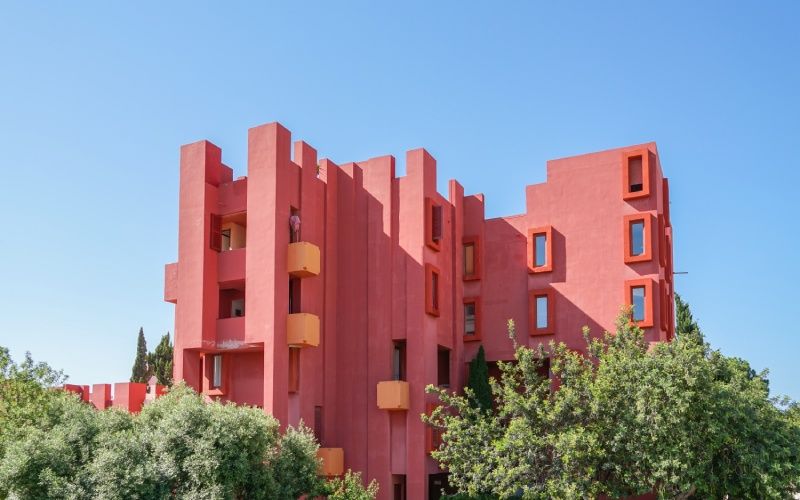 The Red Wall is made up of a total of 50 houses and apartments distributed in a seemingly disorderly form. They are surrounded by a huge red wall that breaks with the landscape and refers to the adobe houses found in North Africa. Its influence within the Arab Mediterranean style clashes and enhances, mixing with modern structures and themes that give it an air of another time.

The basis of this urbanization is around the Greek cross shape. Although, however, the whole network of blocks that surround it make the plant of this architecture is uneven and chaotic. Its network of bridges, stairs and walkways made through geometric shapes, break down the symmetry and give the feeling of a labyrinth.

As for the chromatic scale chosen, it should be noted that the red of the wall is contrasted with shades ranging from pink to blue, through violet. This creates a range of warm and cool pastel tones that contrast with the natural environment of the sea and the green of the vegetation, and stand out within the linearity of the other nearby buildings.

Inspiration and work of Ricardo Bofill 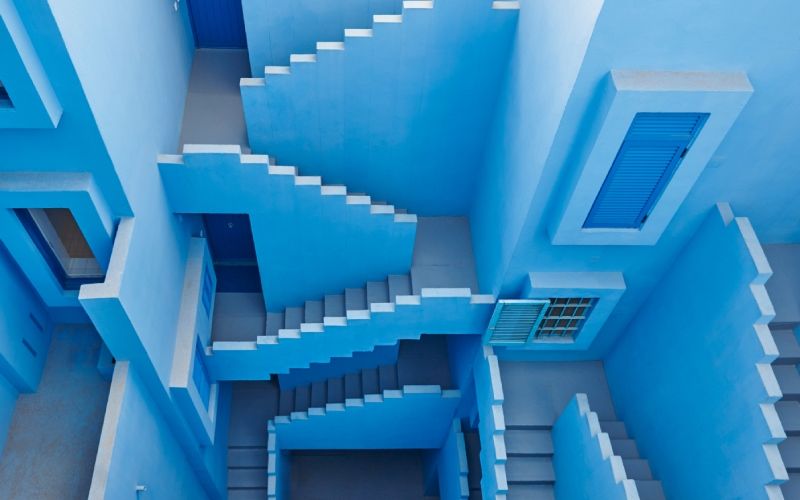 A part of this striking architectural ensemble. | Shutterstock

The author of this reputed and commented construction is the Catalan architect Ricardo Bofill, who began designing and erecting this important architectural project during 1968. Bofill has been characterized in all his designs for having great Arab influence and, on this occasion, he would have wanted to mix it with Mediterranean aesthetics.

Ricardo Bofill has been able, throughout his career, to mix the architectural styles of North Africa with the most innovative postmodern trends. He is the author of other characteristic buildings such as the W Hotel in Barcelona or the Gaudí Neighborhood in Reus. So much so that, in 1963, he founded Ricardo Bofill Taller de Arquitectura, focusing on urban design, interior design, architecture and exteriors. When he moved his studio to Paris, he was named Doctor Honoris Causa by the University of Metz.

When designing the Red Wall, Bofill was inspired by the aesthetics of adobe houses in North Africa with Arab touches. It was not until 1972 that the construction of the development was completed and in 1973 it was finally unveiled. The Red Wall is within the neighborhood of La Manzanera, in Calpe, and has spectacular views of the Mediterranean Sea and the imposing Peñon de Ifach.

The perception of the Red Wall up to the present day 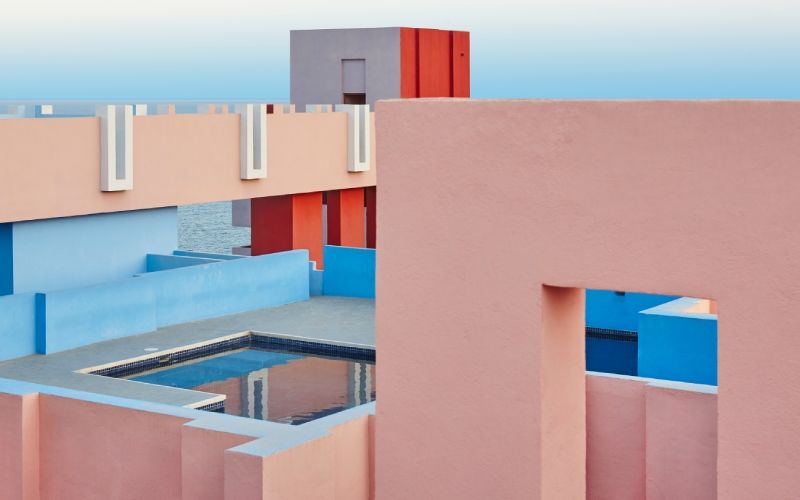 Swimming pool at the Red Wall in Calpe. | Shutterstock

The Red Wall is a building that, due to its size, colors and shape does not go unnoticed. These factors have not been the only ones for which, over the years, it has generated debate among people. At first, this urbanization emerged as an aesthetic and visual proposal for the coast of Calpe and as a housing model in which the community would reign.

Precisely, all this framework has the function of guiding the inhabitants to the common areas, such as the swimming pool or the courtyards. This model was intended to put an end to the linear, flat and individualistic constructions of the area but, nevertheless, it ended up being an isolated case, standing out strongly compared with the buildings in the area.

It was precisely because of this factor that many people were initially against the Red Wall, arguing that it broke with the harmony and was out of harmony with the maritime and vegetal environment. However, although it fell into oblivion for a few years, it has been globalization and the emergence of social networks that has put this characteristic urbanization back on everyone’s lips.

Nowadays, the Red Wall has become a viral phenomenon. Hundreds of people have wanted to take a picture of themselves on one of its characteristic staircases or pastel-colored backgrounds. However, access after this social boom is being restricted. Do not forget that these are apartments where people are living. The right way to get to know first hand this spectacular construction is to ask for the appropriate permits to be able to record and photograph. Or renting one of its rooms.

Alicante, architecture, calpe_lx, Valencian Community
It may interest you...