A stronghold disputed for centuries by Moors, Portuguese, Leonese and knights of fortune, the warrior spirit is strong here. A past that could stimulate the youthful ambitions of the daring conquerors of the Americas born there. Full of beautiful corner balconies, this city is today a cultural bridge with Latin America.

Celts had a castro there that the Romans called Turgalium. Romans developed this granite hill and called it Castras Juliae, being dependent on Norba Caesarina, the present day Cáceres. Visigoths gave it the name of Torgiella, erecting a basilica behind the walls of the current Puerta de Coria. Muslims occupied the town and reinforced its fortifications. They also held an important cattle market outside the walls, in what is now the Plaza Mayor of Trujillo. Around the year 900 they began to build the castle and its wall.

It was an important Almohad stronghold. However, it was conquered in a coup by the famous Portuguese knight Geraldo Sempavor. In 1169, Fernando Rodríguez de Castro el Castellano, captured the Portuguese king and Sempavor at the Battle of Badajoz. In exchange for his freedom, he was given castles such as those of Trujillo and Montánchez to form a semi-independent lordship over León, Portugal and the Almohads.

During 1186, this lordship reverted to King Alfonso VIII, who ceded these castles to the orders of Santiago and San Julián de Pereiro. However, they were soon lost to the Moors. In 1232, King Fernando III definitively conquered Trujillo. The devotion to the Virgin of the Victory, whose image is placed on the wall between two towers, to protect his city, goes back to that date.

The then called Truxellum received a charter, granted by Alfonso X, and was later the scene of disputes between nobles. After the title of city was granted by John II in 1432, Isabella the Catholic established the Holy Brotherhood in Extremadura, reducing the noble quarrels. As a royalty town, it was managed by a council that leased the meadows, carried out public works and provided various services. This brought much more self-government than to the towns under the jurisdiction of the Lords. 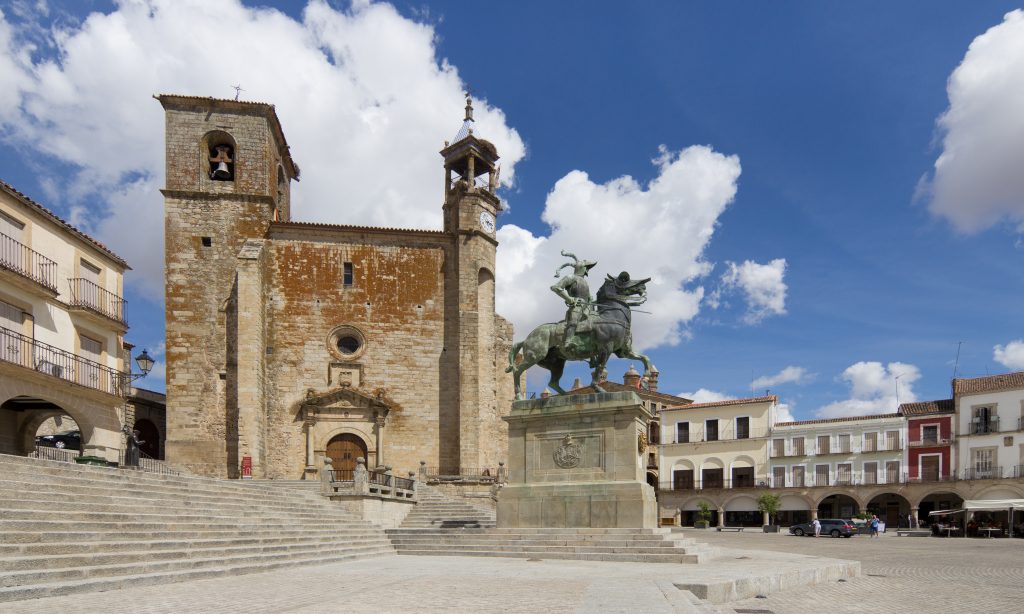 In the 16th century many indigenous people marched to conquer America: Orellana, Francisco Pizarro, García de Paredes and Francisco de las Casas were the most famous. The Indiano families are responsible for several beautiful buildings that you can see today in Trujillo. Since the end of the 16th century the history of Trujillo has been marked by negative factors. For example, the ruin of the Crown, the abuses of the contour landowners or the arrogance of the Mesta. All this caused a notable impoverishment.

As Trujillo was on the Camino Real leading to the main square of Badajoz, it was the scene of fighting in the Portuguese War of Restoration. Thus, in 1653, the inhabitants of Trujillo bought a joint vote in the Cortes to defend their interests.

Trujillo opened the 18th century with the War of Succession to the Spanish throne. Added to previous conflicts, it caused further ruin and desolation. Some visitors of the time described a series of semi-deserted streets and abandoned buildings. During the War of Independence (1808-1814) it was occupied for more than eleven months by the French, who squeezed it economically. By the 19th century, it was already a large regional centre. Livestock trade stabilised the situation of the city, but did not prevent the exodus of its inhabitants. Gradually, tourism is becoming a source of wealth.

What to see in Trujillo

The trip can begin in the old intramural enclosure, the space that houses the “original nucleus” of the city. It develops around the Trujillo Castle and is surrounded by the remains of the Muslim wall. The defence would be rebuilt after the Christian conquest.

It is possible to access the enclave from the Plaza Mayor of Trujillo, through the Puerta de Santiago. This is flanked by the Palace of Luis de Chaves el Viejo and the Church of Santiago (12th century and Romanesque). The visitor’s attention will quickly be captivated by the presence of Trujillo Castle, which can be reached by bordering the walls. It was raised by the Muslims on the hill or Cabezo del Zorro around the middle of the 9th century. The 12th and 15th century extensions are visible, at which time the second fortified enclosure or Albacara was added.

The Plazuela de Santa María was the centre of the town within the walls. There is the birthplace of the conquistador of Peru, which now houses the Francisco Pizarro Museum (15th century). It also houses the Convento de las Jerónimas (15th century), in which the Museo del Traje has been installed. Finally, there is the Church of Santa María la Mayor. This is a 15th century Gothic temple, on which work began two centuries earlier. The influence of the Romanesque style can be seen in the apse and the tower. Inside are the pantheons of the city’s greatest lineages. It also has an interesting main altarpiece, in Gothic style and with panels by Fernando Gallego (15th century), as well as a Plateresque choir.

In contact with the western wall, there is what was originally the Convent of San Francisco el Real. The complex is popularly known as “Convento de la Coria” because of its proximity to the door of the same name. Carmen Ortueta and Xavier de Salas acquired the place, which was in ruins, and constituted a foundation dedicated to gathering the cultural relations between Spain and Latin America. It also houses the Museo de la Coria.

The characteristic architecture in Trujillo

Nearby is the unique Calle de las Palomas, which links Santa María la Mayor with the Puerta de San Andrés. This street, which you can see in Trujillo, is home to the Casa de Francisco de Orellana (15th century), the discoverer of the Amazon. Also the Chaves-Calderón house, with the characteristic corner balcony of Trujillo’s architecture. Opposite stands that of the Rol-Zárate and Zúñiga (15th century). At the end of the street is the Alcazarejo of the Altamirano family (13th century) and, defending the Puerta de San Andrés, the Casa Fuerte de los Escobar (15th century).

Behind the Church of San Andrés (16th century) is the impressive Muslim pool, which some authors identify with Roman baths. It is 11 metres deep and served as a public bath until 1935. Other nearby buildings are the Hospital de la Concepción and the Alcazarejo de los Bejarano. Such a bastion defended from the contiguous Puerta de Fernán Ruiz.

Continuing is the Renaissance area. Its entire environment is the product of urban development corresponding to a considerable growth in population. The space has as its axis the Plaza Mayor of Trujillo. The extension dates from the 15th century, when the walled area became insufficient to accommodate the new settlers.

In the same Plaza Mayor of Trujillo was located the famous Picota, the largest in Extremadura, decorated with the coat of arms of the Catholic Monarchs. Today this landmark has been moved to the area of the Ensanche. Today, the equestrian statue of Pizarro, made in bronze by the sculptor Charles Rumsey (1929), presides over the place. 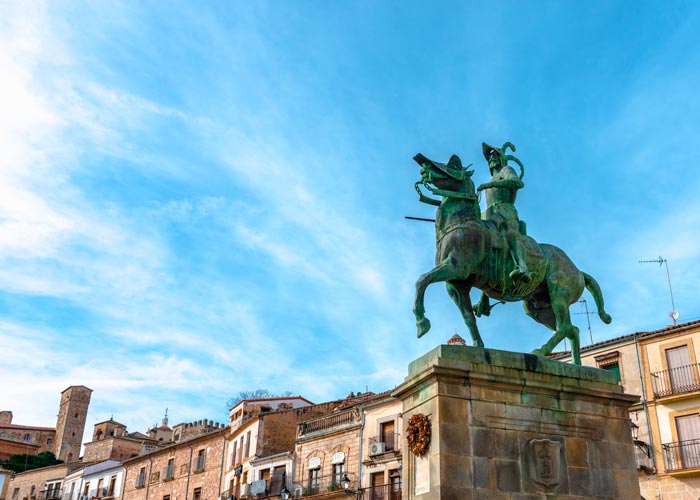 In the northwest corner is the Church of San Martín, built between the 14th and 16th centuries. It is a mixture of Gothic and Renaissance styles. Its sober exterior is crowned with the two towers of the feet, possessing a single nave and an octagonal presbytery. On the right side of the temple is the Palace of Los Duques de San Carlos (16th century), with its rich plateresque façade. The corner of the building is crowned by the family coat of arms, arranged as a classic corner balcony. The whole complex is finished off with a set of Mudejar chimneys.

In the southeast corner of the Plaza Mayor of Trujillo stands the Palace of El Marqués de Piedras Albas (16th century). It has a porticoed façade, decorated with arches of Florentine influence. In the other corner is the Palace of El Marqués de la Conquista (16th century), built as the residence of Hernando Pizarro. It would be reformed by Churriguera in the 18th century. The most striking element of the complex is the beautiful corner balcony with the busts of the Pizarro family and the coat of arms of the conqueror of Peru. Nearby, the visitor will find the Old Town Hall and the Palace of the Chaves Cárdenas, of neoclassical style.

On the north side of the Plaza Mayor of Trujillo is the Casa de la Cadena (15th century). Such a curious name derives from the symbol of the privilege of royal asylum, granted by Philip II, which is displayed on its façade. Behind it are the Palace of Los Chaves Sotomayor (16th century) and the Church of La Sangre (17th century).

In the adjacent Calle de Ballesteros, there is another landmark to see in Trujillo. It is the Renaissance Palace of Santa Marta. Nearby, between the square and the Puerta de San Andrés, stands the Orellana-Pizarro Palace. It boasts a porticoed gallery between towers towards the outside and a plateresque patio.

More modern in style is the Ayuntamiento Nuevo, installed in the old alhóndiga, opposite the Palace of the Pizarro Aragon family. Also, the Palace of the Marquises of Sofraga, in the square of San Miguel, stands out for its corner balcony. Finally, in the surroundings there are several convents, also Renaissance or Neoclassical. In addition to their architectural value, they preserve remarkable works of art.