The neoclassical style was introduced in Spain after the arrival of the Borbón at the beginning of the 18th century and the new ideas brought about by the Capitoline enlightened despotism. When the dynastic change took place, the Baroque was solidly established in the country; associated with the House of Austria and the Church of the Counter-Reformation. From then on, it entered a less ornate and more austere phase which would be a precursor to the Neoclassical movement which began in the mid-century.

From the beginning, the Borbón pursued the idea of beautifying Madrid with great works and civil avenues. But it was not until the accession to the throne of Charles III in 1728 that the ambitious reform project was carried out. Under the ideas of the architect Francesco Sabatini, the capital broke with the previous Baroque regulations and began a period marked by the Neoclassical style that lasted until the 19th century. 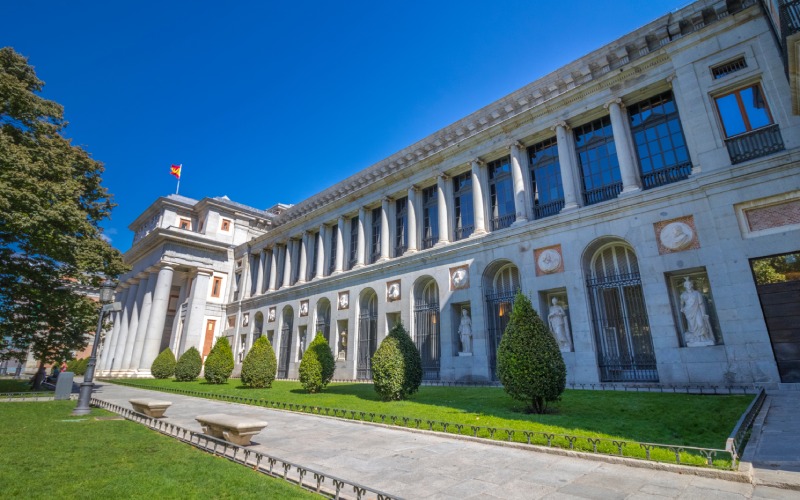 The capital was designed along two artistic lines drawn by Sabatini. On the one hand, a monumental axis that connects the Puerta de Alcalá with the Royal Palace and in which buildings such as the old San Fernando Royal Academy, the renovated main square and the Royal Theatre, among others, are lined up. Perpendicular to this route, a cultural axis is drawn along the Paseo del Prado; adorned with boulevards, gardens, fountains and classicist statues such as those of Cibeles and Neptuno. It contains buildings and institutions of a cultural or scientific nature, such as the Museo del Prado, the Observatorio Astronómico, the Palacio de la Bolsa and the Palacio de las Cortes. This work has been extended throughout different reigns and professionals up to and including the throne of Elizabeth II.

Francesco Sabatini was the main architect of the late Baroque and a precursor of the Neoclassical style; whose works left an important mark on the architecture of Madrid. The best example was the Puerta de Alcalá; which is one of the five old royal gates that gave access to the city. It was erected in 1778 and has a monumental appearance similar to the Roman Triumphal Arches. It is located in the centre of the Plaza de la Independencia, at the intersection of Calle Alcalá, Alfonso XIII, Serrano and Salustiano Olózaga, next to some entrances to the Retiro.

Puerta de Alcalá acquired importance in Madrid since its arrival at the end of the 18th century. Today it is one of the most representative icons of the capital due to its double condition of looking at the interior and exterior of the city. Throughout its life it has also served as a support for all kinds of political and artistic claims where genuine historical events have taken place. 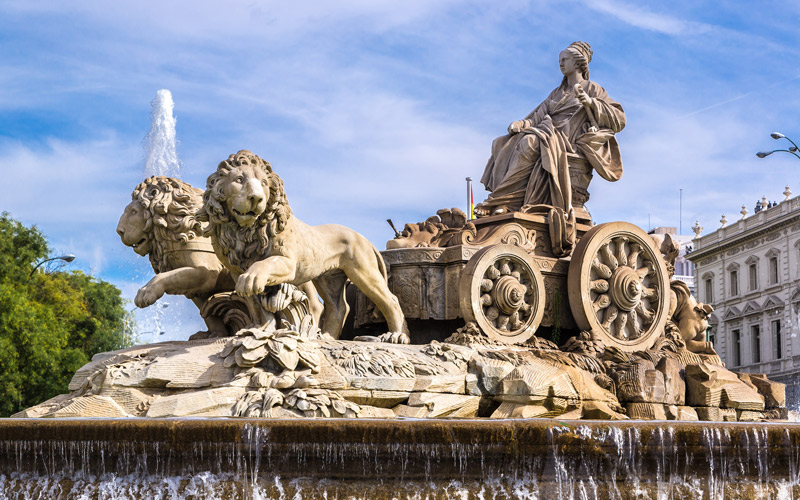 Charles III and Sabatini’s project included a series of fountains sculpted with classical mythological motifs; such as the fountains of Cybele and Neptune. Both designed under the neoclassical precepts of Ventura Rodríguez, are presided over by sculptures of gods. The first of them is located in the square that bears its name and between the central streets of Recoletos and the Paseo del Prado. Cybele is the goddess of the earth, fertility and agriculture. She is represented on top of a chariot pulled by lions and with her head crowned with towers with one hand on the sceptre and the keys to the city in the other. 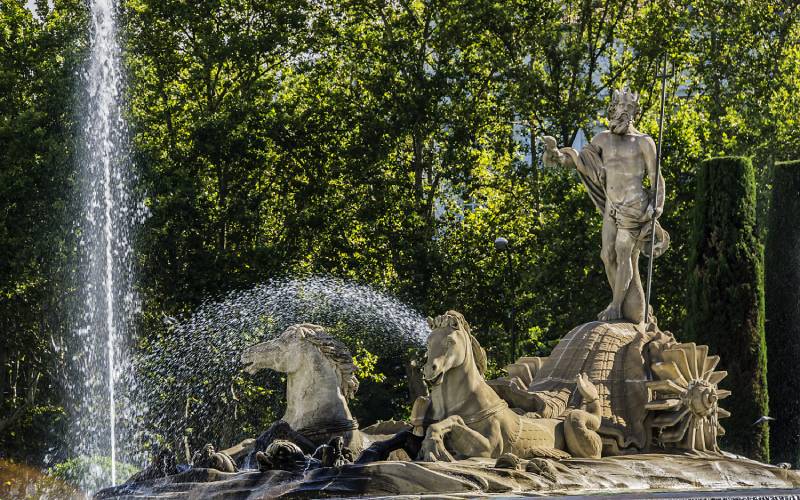 From there and following the Paseo del Prado, the other fountain is located, that of Neptune, god of the sea. He is one of the twelve divinities of Olympus, son of Saturn and Rhea. He is represented with a coiled snake in his right hand and his famous trident on the left; standing on a shell-shaped chariot pulling two sea horses. The god of water could have been the symbol of the Navy that King Charles III reformed at the time.

Architect Juan de Villanueva followed Sabatini and began his professional career in Madrid during the reign of Charles III. He then continued under his son Charles IV, who named him Master Mayor. Without doubt, Villanueva’s greatest work and a perfect example of the city’s neoclassical architecture was the Prado Museum, located in the heart of the Paseo del Arte.

It was in 1785 that the architect of the Royal Sites and the Madrid City Hall was commissioned by Charles III to erect a building in the Prado de los Jerónimos. However, it did not originally house an art gallery like the one we have today. It was then planned as the headquarters of the Cabinet of Natural History and the Academy of Sciences. It took a few years and many historical episodes for the Villanueva building to become a museum.

Finally, in 1818 Ferdinand VII made public his decision to house a large number of works from the royal collections in the building, transforming it into a proper painting gallery. The museum opened the following year under the name of “Museo Real de Pinturas”. Over the years, the complex has been extended and renovated. Thanks to this, it has become one of the best art galleries in the world with works by great national and international art geniuses. It has pieces by Goya, Velázquez, Bosch and Rubens, among many others. Its large size and the number of paintings on display make it difficult to make a complete tour of all its rooms, especially for the more novice visitors. 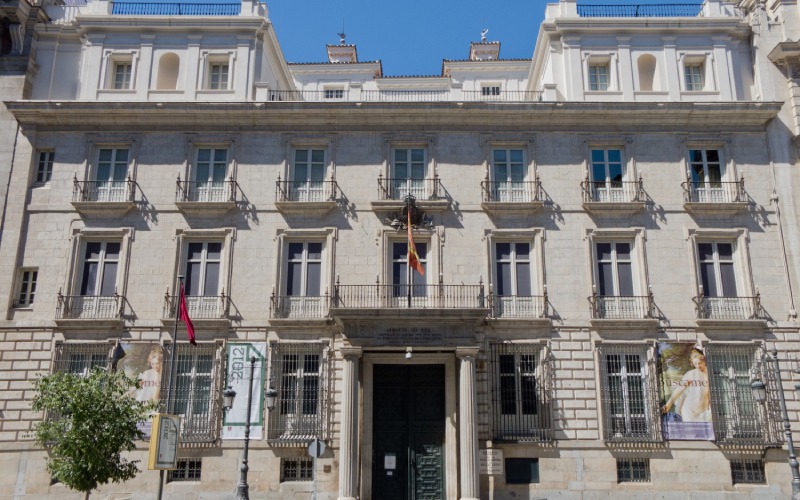 Academia de Bellas Artes de San Fernando; whose facade was adapted to the neoclassical style of the 18th century. | Wikimedia

The Real Academia de Bellas Artes de San Fernando (Royal Academy of Fine Arts of San Fernando) originally had a clear baroque style from the time of Philip V; when it was the former residence of the minister and businessman Juan de Goyenche. But when the Palace became the property of the Academy of Fine Arts in the 18th century, under the ambitious project of King Charles III, it acquired a renewed neoclassical air. The person in charge of transforming the exterior facade was Diego de Villanueva. The architect removed the Baroque elements and placed a Doric order façade in their place. 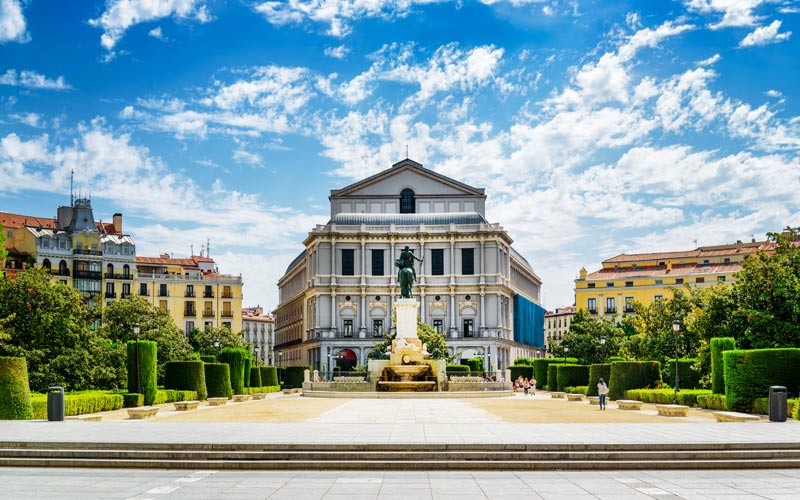 Madrid’s Teatro Real is another of the great works that characterize the city’s neoclassical style. Its construction was no longer promoted by the enlightened monarch, but by his grandson Ferdinand VII in 1818. It was set up in the Plaza de Oriente, next to the Royal Palace. To do so, the demolition of the old Teatro de los Caños del Peral was ordered. The project for the new building was entrusted to the town’s architect, Antonio López Aguado.

However, the monarch could not see it completed, as the work was halted a year later due to the Royal House’s lack of funds. It was his daughter Elizabeth II who opened the theatre once the work was completed in 1850. It was worth the wait, as it was built as one of the great European opera houses, where characters of the importance of Verdi came to occupy its seats. Since then it has not stopped being one of the biggest and best theatres in Spain.

Inaugurated in 1896, the Biblioteca Nacional (National Library) stands majestically on Paseo de Recoletos and Calle de Serrano, next to Plaza de Colón. Work began many years earlier, in 1836. Queen Elizabeth II laid the first stone of the building that today houses the Library and the Archaeological Museum. It is a neoclassical construction with a rectangular floor plan, designed under the original idea of Francisco Jareño y Alarcón.

The wide exterior stairway that precedes the main entrance with a Corinthian style portico stands out. The rectangular pediment is topped by sculptures by the artist Agustín Querol; representing the Triumph of Letters, Science and the Arts. As for the non-architectural decoration of the façade, it is made up of six statues representing important historical figures, including Cervantes, Alfonso X the Wise and Lope de Vega.

Another of the buildings that Elizabeth II herself started was the current Congress of Deputies; located in the Carrera de San Jerónimo. It was inaugurated in 1850, seven years after the beginning of the construction. These were designed under the orders of the architect Don Narciso Pascual i Colomer; who decided on a work of neoclassical style that recalled ancient Greece as the cradle of democracy. Behind its doors, legislation has been debated and approved every day for more than 150 years; housing within its walls the most emblematic episodes of Spain’s parliamentary history.

The highest part of the building has a triangular frontispiece, the work of the sculptor Ponciano Ponzano. It is composed of rounded sculpted figures of classical appearance that give allegorical life to the Spanish nation; which appears to be embracing the Constitution. Other images are grouped around it, representing Fortress, Justice, Fine Arts, Harmony, Commerce, Agriculture, Rivers and Navigation Channels, Spanish Courage, Science and Abundance and Peace. This work has been considered by various experts to be the largest sculpture collection of the Spanish 19th century. 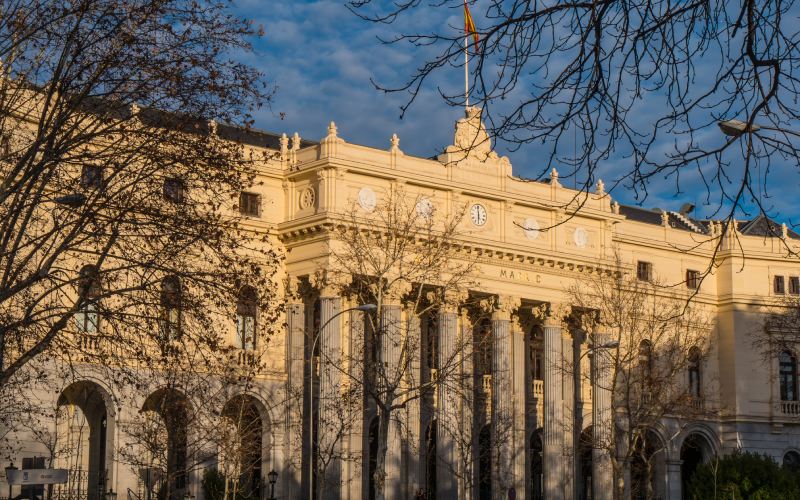 On the emblematic Paseo del Prado, tobacco smoke, running and shouting made up the frenetic daily scene at Madrid’s Palacio de la Bolsa during much of the 20th century. Inaugurated in 1893 by the Queen Regent María Cristina, Spanish stock market activity was concentrated in this magnificent building in the Plaza de la Lealtad. Hundreds of agents and brokers crowded into it every morning.

The Palacio de la Bolsa was designed by the architect Enrique María Repullés; who chose a neoclassical style similar to that of the buildings that decorated the most emblematic Madrid of the time. Its creator knew very well that in order to design a genuine temple of the Economy he had to give this work the appearance of a basilica, which would give an image of dignity to the Spanish financial system. Thus, its main entrance is presided over by the imposing portico with six Corinthian columns and an elegant stairway.

Community of Madrid, Madrid, museums, palaces, parks and gardens, provincial capital, theatres
It may interest you...