Considered the oldest garden in Europe, the origins of the Court of Oranges date back to the end of the 8th century, when construction began on the impressive Córdoba Mosque which, together with the Alhambra, is the most important monument of all Arab-Andalusian art.

“The Mosque of Cordoba is, without doubt, the first monument in Spain, the most original and the most beautiful,” wrote the Englishman Gerald Brenan. It is a magnificent example of the union between architecture and gardening, a place where the rows of trees outside are the visual extension of the immense forest of columns inside. Its refinement reflects the sophistication of the culture of Al-Andalus and Caliphal Córdoba, which around the year 1000 was the most populated city in the world, with one million inhabitants, and a very important political, economic and cultural centre.

The mosque was a place for religious, social and political meetings, as it could hold up to 20,000 people. Both the courtyard and the mosque were built from the 780s on top of a Visigothic basilica, and were successively extended until 988. After the Christian conquest of Córdoba in 1236, the temple was transformed into a Catholic sanctuary and a series of modifications were made. Like a Russian doll, the immense building holds a surprise inside: a solemn cathedral that began to be built in the 16th century, under the reign of Charles V.

Until the Christian era, the mosque was open to the courtyard, which allowed the total fusion between the interior and exterior, forming a single continuous space with the columns and tree trunks, which were initially palms, cypresses and olive trees (the latter supplied the temple’s oil lamps). The orange trees that give their name to the patio arrived in the 10th century, when, along with many other species (lemon trees, apricots, bananas, rice, cotton, sugar cane, date palms, aubergines…) they were introduced to Europe by the Arabs. They are bitter oranges (Citrus aurantium) originating from Southeast Asia, whose fruits were used for perfumes, jams and medicines. Thanks to their great aesthetic appeal, these trees became the protagonists of Spanish and Islamic gardening and were present in the streets, gardens and patios.

Today 98 splendid orange trees stand, planted in rows that create a dense green shade throughout the year, with the added value of their beautiful and cheerful winter fruits and their aromatic flowers, which perfume the air in spring. They are watered thanks to a network of channels that run all over the pavement of the Patio de los Naranjos, another interesting example of the symbiosis of the functional and the aesthetic, typical of Hispanic-Islamic gardening. In addition, water refreshes the atmosphere, something so necessary in this place where temperatures in summer often exceed 40 °C.

During the Muslim era, the Court of Oranges was used for ablutions (the ritual washing that precedes prayer in the mosque), but it was also a place of rest and social gathering for the people of Córdoba. We could even consider it as the most important public garden in the city, open to everyone to delight in it, evoking the one who awaits the faithful in paradise, as announced by the quotation from the Koran in one of the inscriptions inside the temple: “Do not be afraid, do not be sad, but rejoice in the garden that was promised to you”. Once again we find the timeless idea of the garden linked to the longing for paradise, an idyllic place, brimming with peace; that is to say, a true spiritual garden.

Andalusia, arab, Cathedrals, Córdoba
It may interest you... 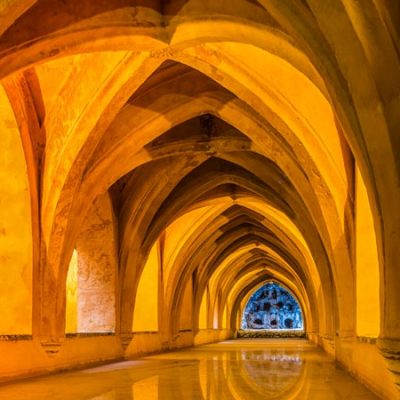 Being one of the most precious and meticulous styles of...
>> More information 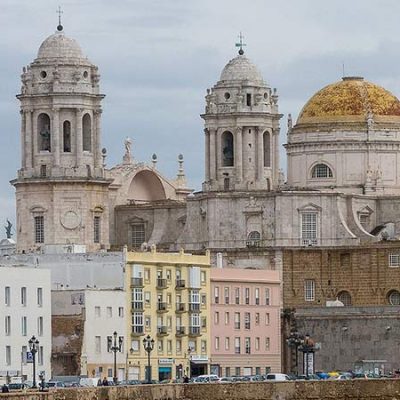 The Cathedral of La Santa Cruz is located on the...
>> More information 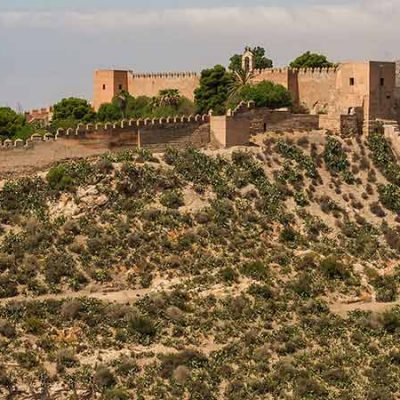 The Alcazaba of Almería presides over the Andalusian capital from...
>> More information 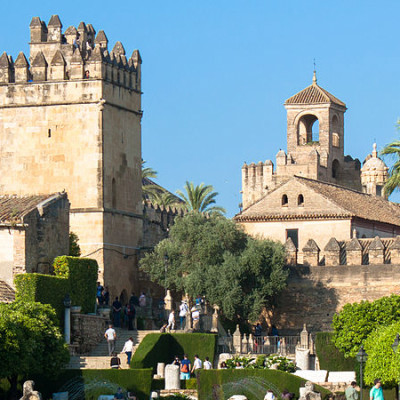 The Alcázar de los Reyes Cristianos, in Córdoba, is a...
>> More information

Medina Azahara
[vc_row][vc_column][vc_column_text]Medinat al-Zahra, better known as Medina Azahara in Spanish, Córdoba, is one of the most Más información