In the south of the peninsula there is a city whose history speaks through its many civil and religious buildings with heavy decoration and large ornaments. It is the Sevillian city of Écija, considered the most baroque city in Andalusia. Economic and artistic splendour it enjoyed during the 18th century gave this period the title of “Écija’s Golden Century“.

The arrival of the new Borbón dynasty to Spain meant a heritage boom for the whole country. The concentration of property between the ecclesiastical and aristocratic powers led to the granting of numerous noble titles and, consequently, the construction of many palaces, noble houses, churches and convents. Écija was one of the great beneficiaries, so its old town holds some of the most notorious Baroque treasures in Spain. Getting to know them constitutes an exquisite journey. 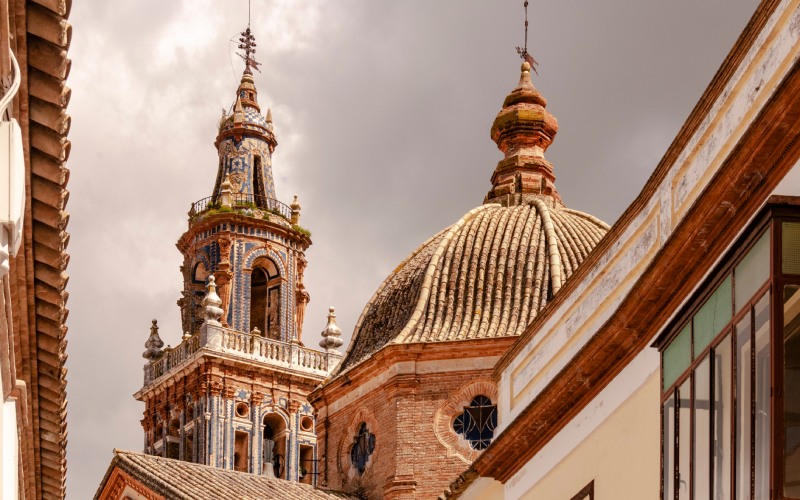 One of the towers that watches over the city of Écija in Seville. | Shutterstock

Among Écija’s most precious gems are its eleven Baroque towers, which are the ones that made it famous. These were damaged in 1775 by the effects of the Lisbon earthquake. However, the whole group of palace-houses that it has, deserves a special mention, as they are genuine artistic monuments that make up a great Baroque art gallery, the best in all Andalusia. The Peñaflor Palace, the Benamejí Palace and the Santaella Palace require special attention both because of their architectural style and because of the historical and stylistic similarities between them. 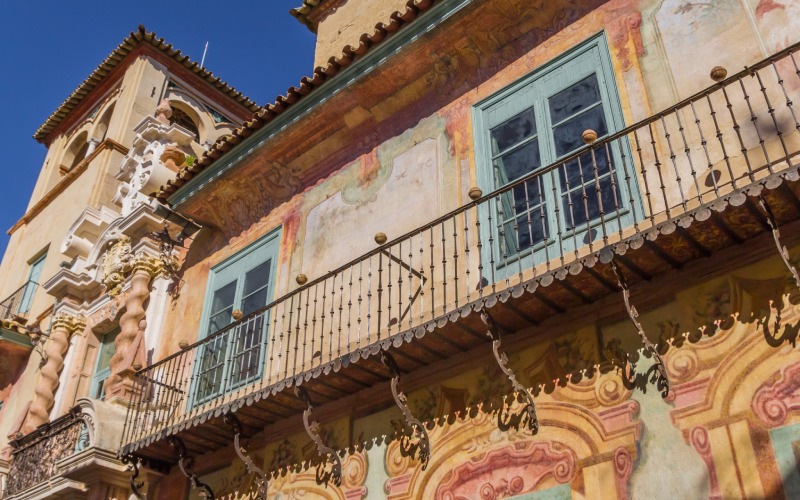 Built around 1770, Peñaflor Palace is seen as a clear emissary of the golden age in Écija. Until 1950, it was the residence of the Casa de Peñaflor, one of Spain’s great fortunes and one of the more than 30 noble titles that settled in the municipality. Since then, the palace has been restored and opened to the public on special occasions. In 1962 it was declared a Historic-Artistic Monument and is protected as a Property of Cultural Interest. 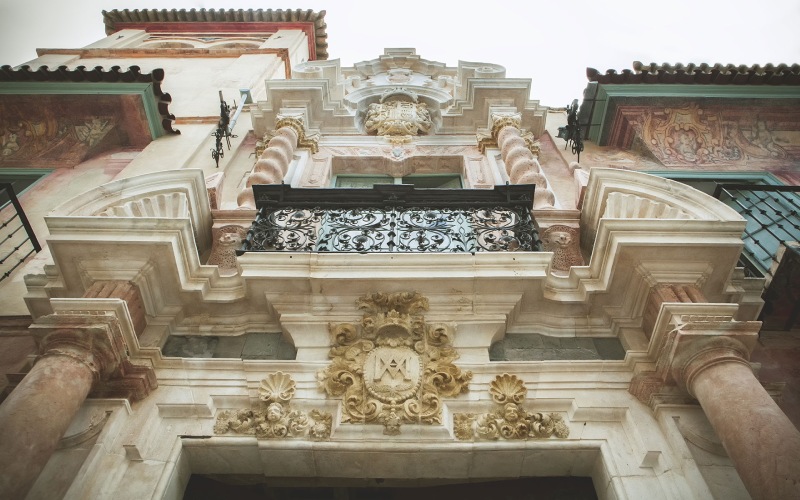 The building is located in one of the most central streets, very close to the main square of Écija. It stands out for its curved forms and the depth of its façade. It has a wide horizontal architecture that contrasts with the high volumes of the façade; which is lintelled with columns on a base that supports a pediment. Therefore, it is highly monumental. The coat of arms of its founders can be seen on the highest part.

But there is nothing as striking as the pictorial decoration that the whole building has, making use of exquisite fictitious architecture. The Baroque character of the building is accentuated by the large 60-metre long balcony. This is flanked by Solomonic columns on lion heads. 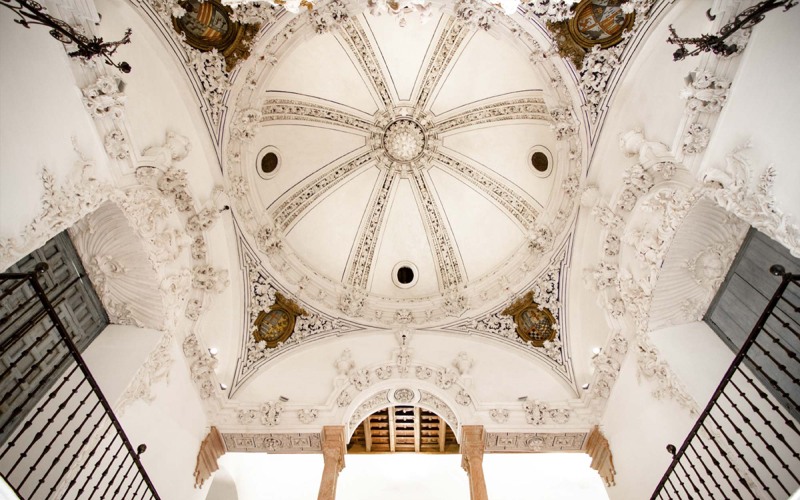 The dome that presides over the interior of the building. | Palacio de Peñaflor

No less important is the internal decoration of the Peñaflor Palace. Its rooms have a suggestive decorative programme, especially the one that houses the staircase leading to the upper floor. However, it is its dome that holds all the attention in this space. Built by Cristóbal Portillo at the end of the 18th century, it is divided by eight ribs joined at the centre by a flower and decorated with plasterwork. It is very similar to the one in the Palace of Santaella. 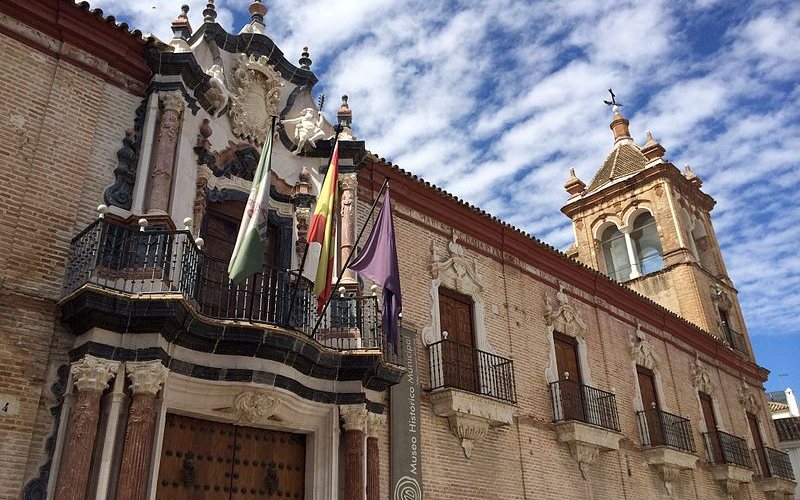 It is one of the best examples of Spanish Baroque civil architecture and one of the great gems the golden century of Écija. It was owned by the Marquises of Benamejí and later passed to the Counts of Valverde. Benamejí is a large palace with an irregular floor plan dating from the 18th century; which in 1994 was recognised as a Property of Cultural Interest and a National Monument.

It has a remarkably horizontal brick façade and a stone base. However, the two large towers at both ends break this monotony and accentuate the verticality of the whole. The centre is presided by a big façade, the most scenographic and monumental one in Ecija. It has two heights and is flanked by Corinthian columns that give way to the balcony. Above it, there is a markedly curved parament that rises over the rest of the façade and centres a richly decorated bay where the coat of arms of the Marquises of Benamejí is housed. 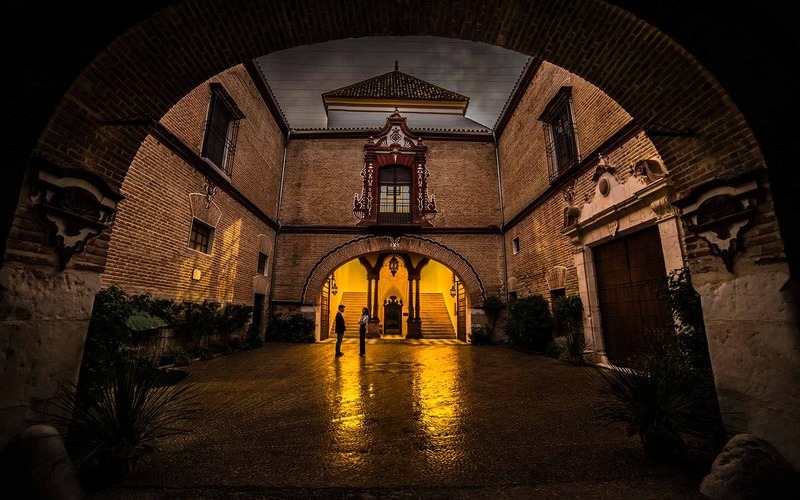 Entrance to the Benamejí Palace. | Wikimedia

When the façade is crossed, an immense arch gives way to the entrance hall and the main stairway formed by three arches on Doric columns. The Benamejí Palace now houses the Municipal Historical Museum, although it was previously home to the Remonta Militar. There are nine rooms of archaeology, among which the Mosaic Hall stands out. This is the most important exhibition of mosaics in the whole of the Roman West, both for its variety and dimensions and for the almost pictorial qualities of its pieces.

The Santaella Palace is another of the great mansions Écija, of exceptional magnificence. Built in the first third of the 18th century, it was owned by the Marquis of Santaella and later by the Counts of Puerto Hermoso. The large carved stone façade is of great interest. It contains singular ornamental elements in figures placed before the pilasters in the manner of caryatids, which enhance the family’s heraldic coat of arms. On one of its sides there is a street altarpiece decorated with murals dedicated to the Virgin of Valvanera, which has all the charm of the period. 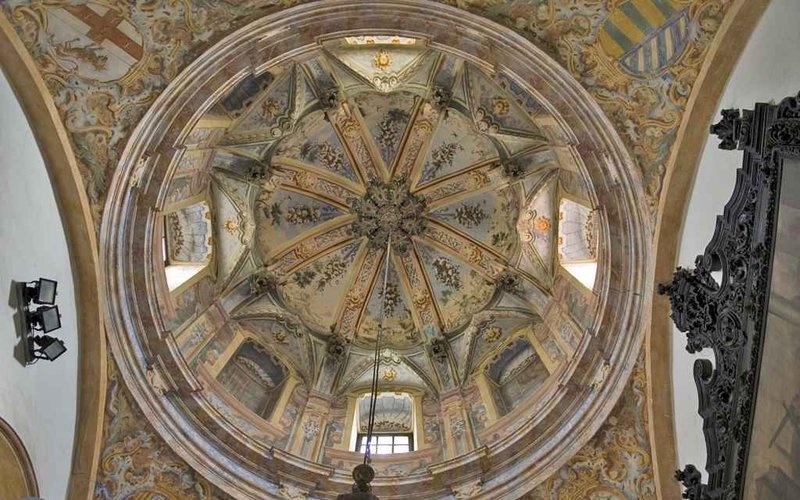 Dome of the Palace of Santaella. | Wikimedia

It has a close connection with the Peñaflor Palace in terms of the architecture of its interior; especially in the staircase leading to the upper floor. But nothing is more striking than the drum dome, decorated with polychrome plasterwork with floral and landscape ornamentation. The carpentry of the carved doors is also to be admired; giving it one of the hallmarks of this palatial building of Écija.