Madrid’s Plaza Mayor is one of the city’s most emblematic places and a must when taking a tour of the Spanish capital. If its walls could speak, any visitor could immerse himself in more than 400 years of history of reigns, architectural landmarks, disasters, socio-political changes, executions, religious acts, celebrations and commercial activities.

The construction of this enclave, which began during the reign of Philip II, replaced the old Plaza del Arrabal, located outside the walls of the old town of Madrid. Since then, at the beginning of the 17th century, the Plaza Mayor of Madrid has been part of the beginning of the city’s urban expansion and has become the largest public area in the capital.

Located in the heart of the Madrid de los Austrias 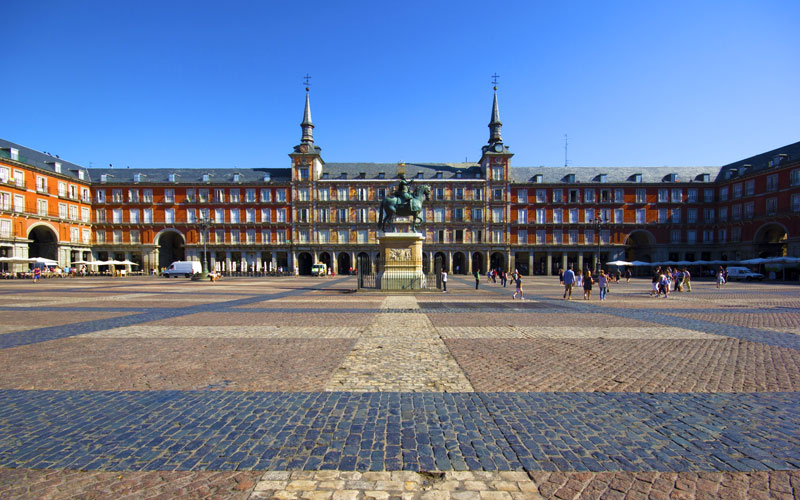 The Plaza Mayor of Madrid is located in the centre of the city, in the heart of Madrid de Los Austrias, where the most important historical monuments of the capital are gathered. A few meters from this square are other places of tourist interest such as the Puerta del Sol, the Royal Palace and the San Miguel Market.

The square, a completely pedestrianised rectangle, is surrounded by 10 arched access gates, each with a history and a destination, such as the one leading to the La Latina district. This is why today it is the favourite starting point for free tours that offer tourists a tour of the centre of Madrid.

A monarchical and architectural history

In the 13th century, the Plaza Mayor of Madrid was the Plaza del Arrabal, a meeting place for the economic activities of different guilds that lived outside the wall that had protected the city since the 11th century.

During this period the population began to grow and suburbs were settled outside the city walls, near the Luján lagoon. When the lagoon dried up, a space was left that was used by the suburbs to congregate. Hence the name Plaza del Arrabal, a place close to the city that gradually became the main market of the town, where everything was cheaper as there were no taxes to pay because it was not subject to municipal control. 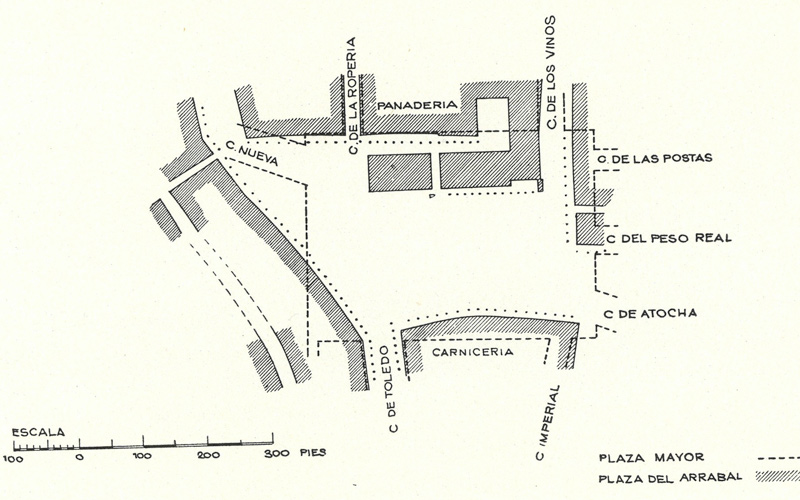 The Square in its beginnings | History Book

In 1561 Philip II moved the Court to Madrid, the medieval walls were demolished and the Plaza del Arrabal began to be part of the city, inviting the rest of the population to make more life in it. Later, in 1581, the corregidor of the town, Luis Gaytán de Ayala, began a proposal to reform the square, while the builder Juan de Valencia drew up a plan for the distribution of the spaces. This led to a proposal sent to Philip II which included the demolition of some houses to convert the square into a square space. The proposal was approved and communicated by the architect Juan de Herrera, and so its transformation began.

In 1598 the construction of the Casa de La Panadería began as a consequence of a crisis in the bread supply in the city, this marked the beginning of commercial progress within the square. Its arcades were made of stone instead of wood and the work was carried out by the master builder Diego Sillero. The two towers of the bakery were inspired by the style of the houses in the Netherlands at that time. One of the fires that damaged the square, the one that occurred on August 10th 1672, left the building destroyed. It was reconstructed conserving the design of Sillero.

For its part, there are different versions about the date of construction of the Casa de La Carnicería and within the history it lacks precise data. It was created to be used as a meat warehouse to supply the town’s markets. After another of the fires that the square suffered, in 1631, its façade was destroyed and later restored. Later on, as it was the seat of the town council, it had different uses. 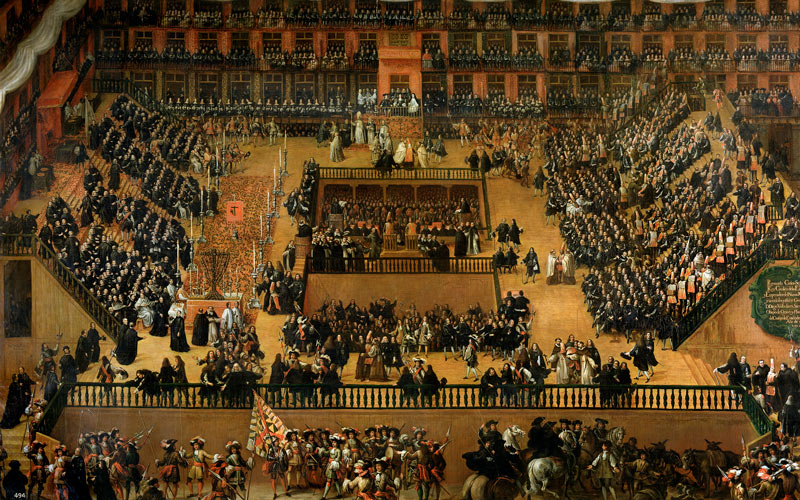 It was Philip III who approved the design that currently displays one of the most spectacular squares in Spain, the Plaza Mayor. When he saw the deterioration of the Arrabal, he commissioned the architect Juan Gómez de Mora to renovate the space, but it had to be demolished and made more worthy of the power of the reign.

In 1617 Goméz Mora began the work: he gave uniformity to the buildings and a rectangle shape to the square, leaving a great space to enjoy the shows. In addition, he left a baroque heritage in the style, visible in its red bricks, in the slate of the roofs, in the spire and weathercocks of the towers, in the lintels and running balconies. He also put up shields with the names of those who financed the work.

Unfortunately, over the years, the Plaza suffered three fires that left it destroyed and deteriorated, but it was always reconstructed conserving the design of Juan Gómez Mora. It was Juan Villanueva who faced the most complicated reconstruction after the third fire and added a neoclassical style to the facades by replacing wood with stone. He also removed two heights from the buildings, leaving the four levels we see today.

What to see and do in Madrid’s Plaza mayor?

Inside Madrid’s Plaza Mayor there are many relevant and interesting spaces to be considered. One of the most important is the Casa de la Panadería, where there is a tourist information point. It can be recognised by the Spanish coat of arms in the centre of the upper part of the building and by the paintings on its murals, which have been replaced by those of the artist Carlos Franco.

On the left is the old Casa de la Carnicería. Current photo | Shutterstock

Another of the most important and historical places in the square is the Casa de la Carnicería. Today this building is recognisable because it is located in front of the Casa de la Panadería, with two sides that end in attics and with delimiting angular towers. Until recently, its back part was one of the headquarters of the fire brigade of Madrid and nowadays its structure is part of a four star hotel. 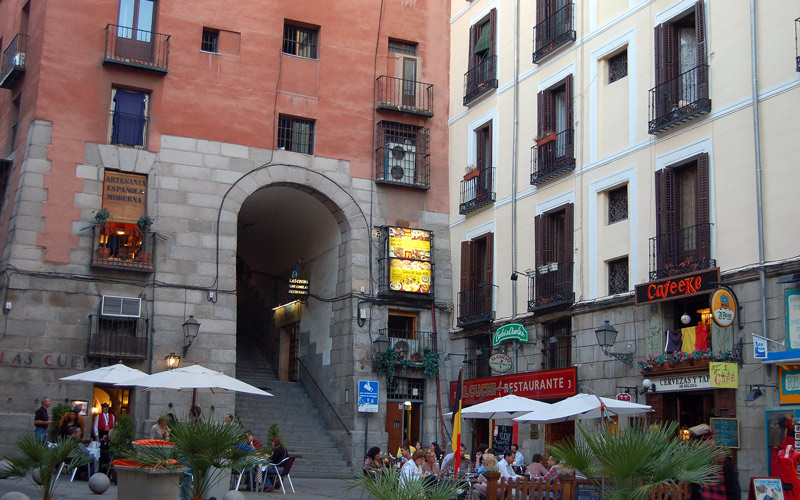 Arco de Cuchilleros from the outside. | Shutterstock

Of all its entrances, the most interesting is the Arco de Cuchilleros. This arch, located on the west side of the square, was where the workshops of the knife makers’ guild that sold knives to butchers gathered, hence its name. Its stairs were designed by Gómez Mora to solve the unevenness between the square and Cava de San Miguel Street, which was caused by the old Luján lagoon. Going down these stairs there are several inns in the shape of caves and it has an exit to the popular San Miguel Market. 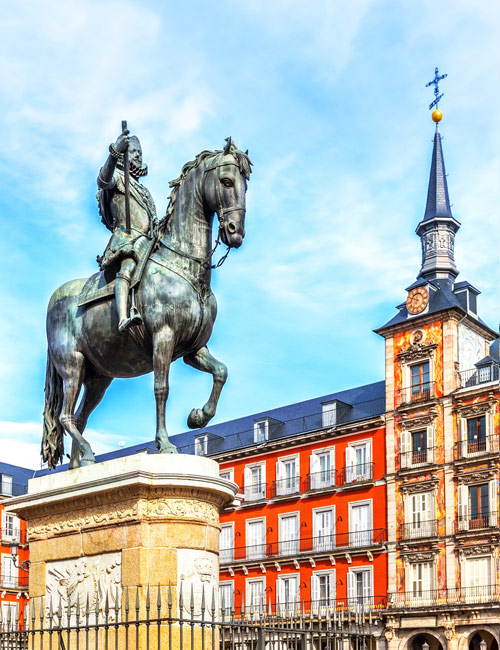 The most striking element is the statue of Philip III in the centre of the square because it is the first thing you see when you arrive. The statue, which was a gift from the Grand Duke of Florence to Philip III, was previously in the historic Casa de Campo garden until 1848 when Queen Elizabeth II ordered its transfer to the square. 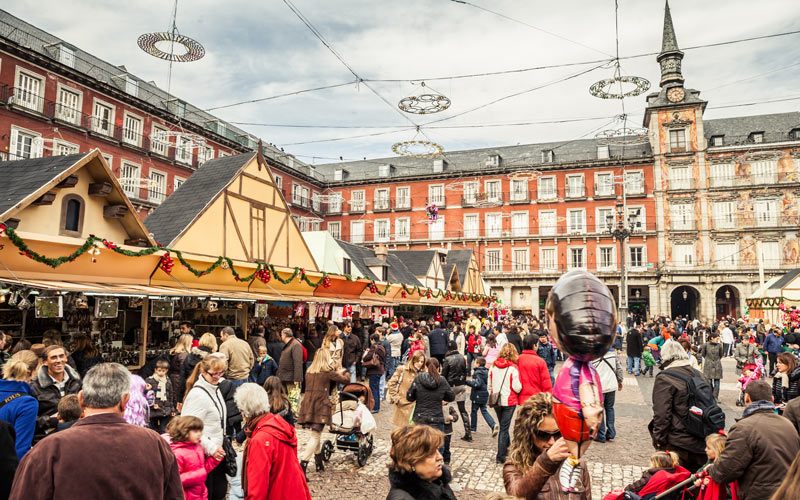 Any day you go to the Plaza Mayor you can see street artists, painters, a fair or special exhibition, but if you go on a Sunday you can see the market that is set up in its corridors, which mainly sells coins, stamps and collectables. There are also fabric, hat and souvenir stands. But if you visit the Plaza Mayor in December you can enjoy the Christmas market with its colours, lights, costume stands and decorations to celebrate these special dates.

Even so, no matter what month of the year it is to eat a bocadillo de calamares (squid sandwich) in Madrid’s Plaza Mayor, one of the most typical products of Madrid’s cuisine, it is a classic for everyone who visits this tourist area. Around the square, especially in the botoneras street, there are traditional bars that offer this sandwich with a beer. It is easy to find them because there are always long lines. 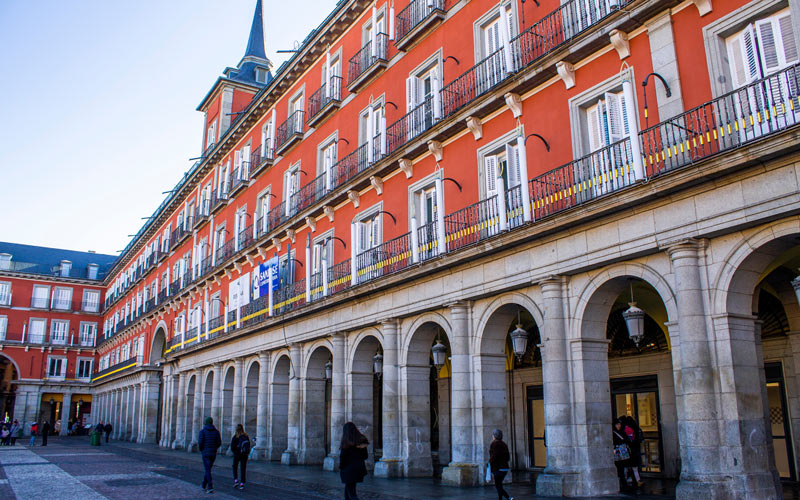 Shops in the corridors of the Plaza Mayor in Madrid | Shutterstock

Moreover, if you want to see shops with old facades, under the porticos there are still premises that have been frozen in time, especially the hat shop of shop number 25, which still maintains the same characteristics of past centuries.

The names of the Plaza Mayor

With more than four centuries of history, the Plaza Mayor of Madrid holds many secrets and stories. One of its curious facts is that it has had five names since its beginnings: “Plaza del Arrabal”, “Plaza de la Constitución” in 1812, “Plaza Real” during the reign of Ferdinand VII, “Plaza de la República” in 1873 during the first Republic and “Plaza Mayor” today.

In addition, the square was the scene of processions such as those of Corpus Christi which were held there during the 17th century and later, every 1st of May, the pilgrimage of Santiago el Verde. Also, since its beginnings, all kinds of multitudinous spectacles have been held in this space, such as bullfights, wedding celebrations and royal proclamations, theatrical presentations, festivals, pilgrimages, tournaments and other shows that crowded the space. The royal family and the most fortunate watched everything from the balconies of the buildings that, in many cases, were rented to the population, by their owners, for these special occasions. 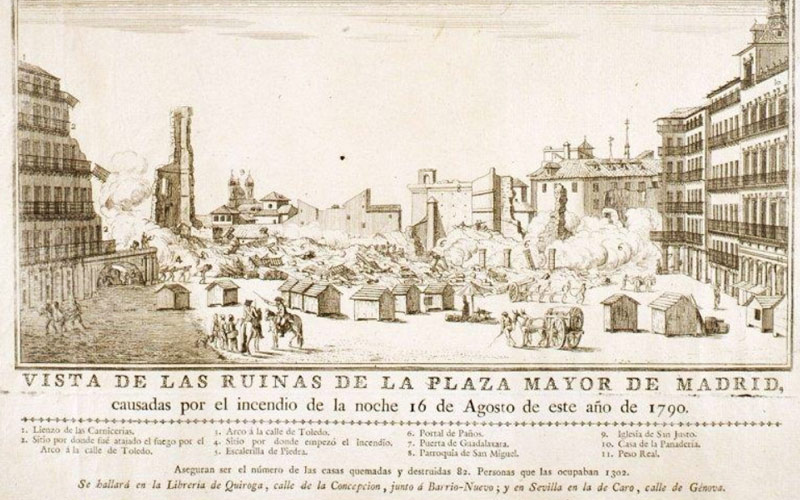 View of the ruins of the Plaza Mayor in Madrid after the fire of 1790. | Wikipedia

There is much more to tell, as we have already mentioned, the square has suffered three fires and three reconstructions, (1631, 1672 and 1790). Other sinister things have also happened in this enclave, such as the public executions ordered by the justice system from the 17th century to 1805. The nobles were beheaded on a platform in front of the Casa de la Panadería, others on the garrote vil in front of the portal de paños (which disappeared after one of the fires) and the rest of the citizens were sentenced to hang in front of the Casa de la Carnicería.

Although, in modern times, the Plaza de la Puerta del Sol has replaced the Plaza Mayor in Madrid as a point of public gathering, no other space has witnessed the life and evolution of Madrid society like the Plaza Mayor.

Community of Madrid, Madrid, squares
It may interest you...