Huesca is one of the Spanish provinces that can surprise, impress and conquer the most. Completely conquer . Its many beautiful places, that one can even find in the most ephemeral journey through this land, are responsible for this. Intense colors, the most authentic mountain, hiking trails always available for those who want them, and the classical of Huesca. All this is what the curious traveler can find among the most beautiful villages of Huesca. Just a warning, it is easy to fall in love at the end of this journey.

This village that release an air of the Middle Ages surprises three times. The first one, when viewed from afar, as it forms with the sierra a dream postcard. Second, when you first stroll through its old town, declared a Historic-Artistic Site for the impressive preservation of its medieval spirit.

And the third one, when one notices the particular details that give shape to a town that contemplates how the Ara and Cinca rivers join together. Like its main square, of huge beauty, or the remains of the castle. Also other more specific spots, such as the cloister of the Romanesque church of Santa María. Aínsa is a historic place that has preserved its traditions and a mandatory stop for anyone who wants to discover Huesca. 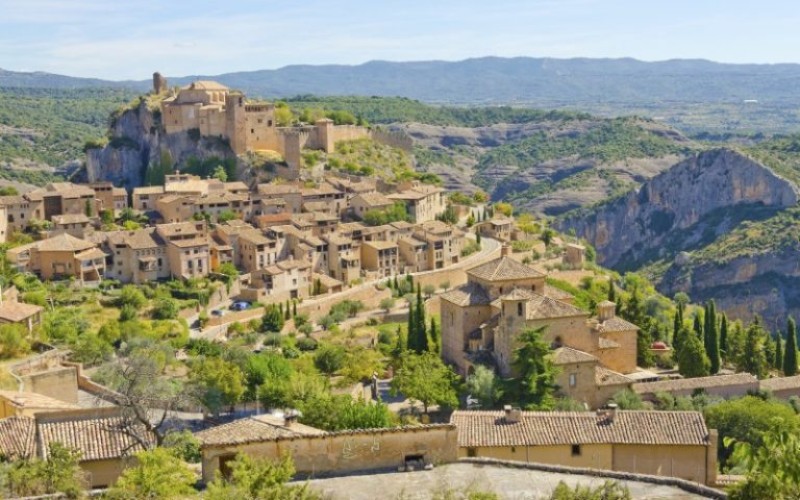 In the Natural Park of Sierra y Cañones de Guara is located this town, also declared a Historic-Artistic Site. Alquézar offers a full experience that should begin with a calm walk. You have to approach its narrow cobbled streets, enjoying places like the fantastic main square, or the views offered by the viewpoint known as Sonrisa del Viento (wind smile).

Traces of its medieval past still remain, in the ruins of the wall or the old Romanesque church. A visit to the collegiate church dedicated to Santa María, once an Arab castle, is essential to understand this rich past. You shouldn’t leave Alquézar without taking the route of the walkways, perfect for the whole family, which allows you to discover the beautiful spots left by the Vero River. 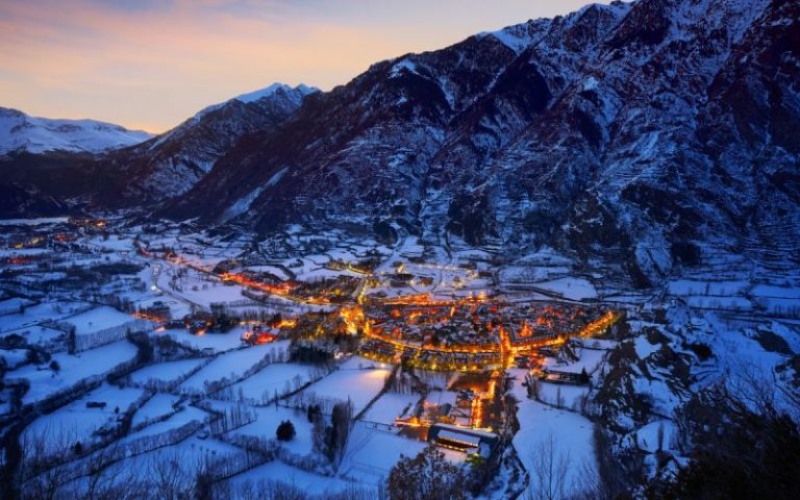 During the winter months, the town of Benasque is covered by snow. All the activity of this beautiful town and the valley to which it gives its name is around it, to the possibilities that gives this form of water. Also, of course, to the beauty that lives in that time. The town is located in the heart of the Pyrenees, at 1138 meters.

But it is much more than snow. Benasque is another beautiful mountain village, with its particular architecture and those stone streets, which is worth a walk to enjoy the peace and the wonderful views. In addition, the hikes from here are fantastic, because of its proximity to the Posets-Maladeta Natural Park or the Aneto itself.

Bestué, living in the 16th century 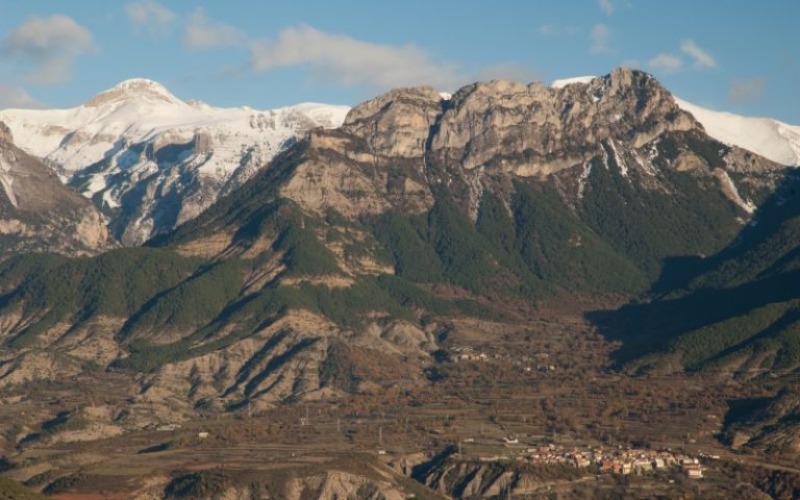 Bestué rests under the mountain. | Shutterstock

This beautiful village exceeds the height of Benasque. It is located at 1228 meters of altitude, being the highest village of Puértolas, municipality that belongs to Sobrarbe. Not only conveys the feeling of not having changed much since the 16th century, but it probably has. It is a small village, with houses scattered at different points and steep streets that are a challenge. Because there are a few less things more satisfying than enjoying the views that this place has.

Very close to Bestué, which resists with its typical chimneys and the medieval church of San Pedro, is the National Park of Ordesa y Monte Perdido. Just in case anyone needed more reasons to visit this beautiful place. 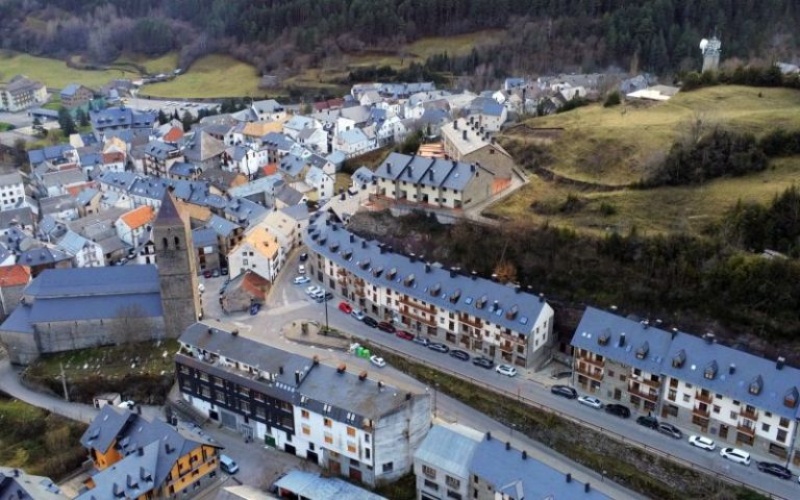 As it happens with Benasque and its white postcard, Bielsa is much more than its carnival, but we must start talking about it. It has been celebrated for a long time. Not in vain, it is one of the most popular carnivals in Spain. It gathers the mythology of the area and turns it into a festival attended by dozens of people every year.

This festivity has given popularity to a town that also preserves its past. For example, the town hall, located in the main square, is a Renaissance building of the 16th century. But the Civil War devastated the place almost completely, in an episode known as the Bolsa de Bielsa, which ended with a good part of the population exiled to France. Bielsa, despite everything, is still full of life. Pyrenees, festivities, beauty and a lot of history. All that is Bielsa. 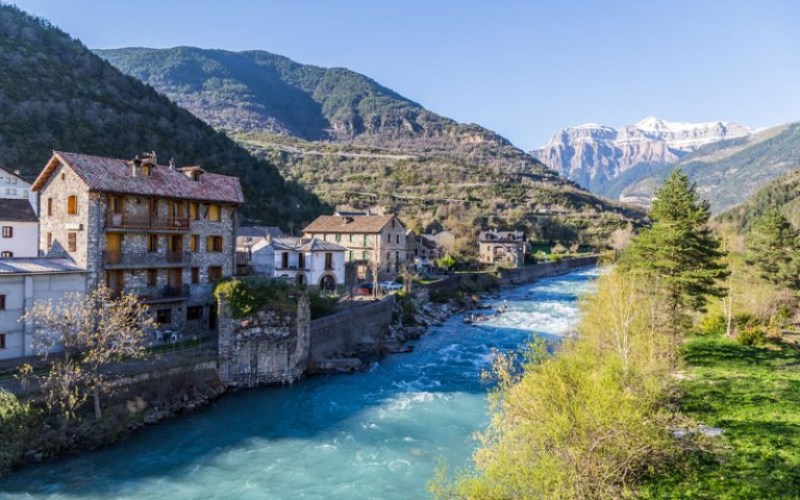 This town shines at the entrance of the National Park of Ordesa y Monte Perdido. Among its points of interest the Casa del Valle is remarkable, a former prison that still retains the memory of the prisoners who remained here once. It also stands out the church of San Pedro Apostle of the 16th century. The Ara River divides the town into two halves, known as the Santa Cruz and the Porches neighborhood.

Five minutes from Broto is the Sorrosal waterfall, a beautiful waterfall 50 meters high. You can walk around it, as the hikes have no difficulty, and can also be seen in the distance. It creates a spectacular image. The local cheese, on the other hand, is a delicacy that must be recognized. 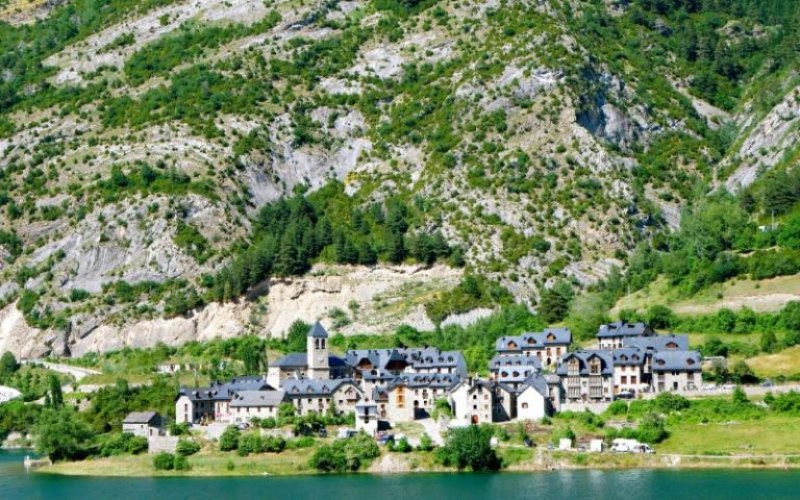 The village of Lanuza. | Shutterstock

Lanuza has not only starred in an unforgettable story of rebirth and recovery, it is also one of the most curious and beautiful places in the Pyrenees. Located near a reservoir that almost caused its disappearance, to which gives its name. Today it is a village of stone and slate, whose access seems almost impossible. However, it is easy thanks to the road that surrounds the water.

During the summer months, it is also a village dedicated to culture. That same reservoir becomes a stage that hosts the Pirineos Sur-International Festival of Cultures, where artists from all over the world perform. Lanuza is a unique place in the peninsula, and a treasure for the five senses. 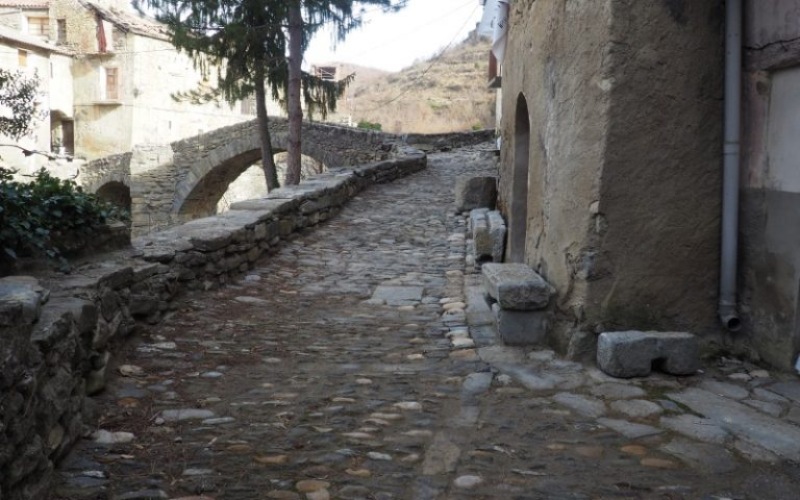 A typical street of Montañana. | Shutterstock

Its stone facades, the remains of two castles, three Romanesque churches and a beautiful bridge have led Montañana to be declared a Historic-Artistic Site and an Asset of Cultural Interest. It is no surprise. This village has the mountain in its name and in every corner of it.

It is a beautiful medieval town, close to the border with Catalonia, which has managed to preserve all its splendor of its time, including defense systems. The natural environment in which it is located is idyllic, with perfect trails to spend a morning in the mountains, and several viewpoints that allow you to enjoy the charm of the area. Montañana is a must to understand the beauty of this province.

Roda de Isábena, the glory of the past 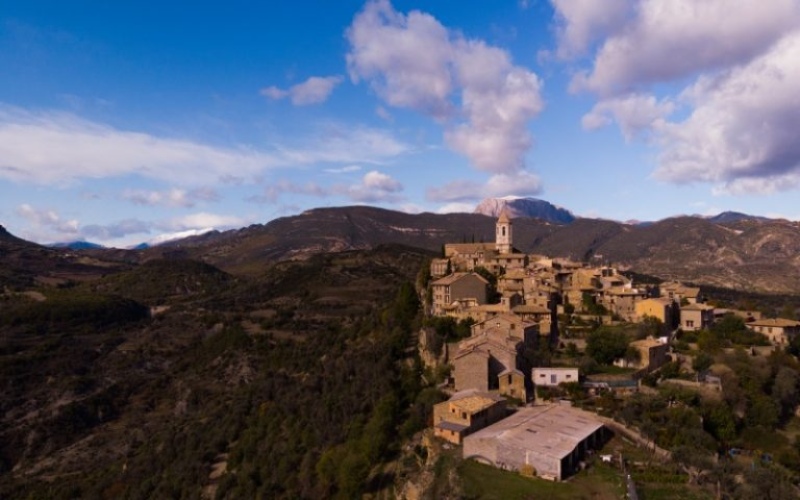 Roda de Isábena has the honor of being the smallest town in Spain with a cathedral. | Shutterstock

How does a town of less than 50 inhabitants have one of the most interesting cathedrals in the country? Because Roda de Isábena has a glorious past. The events of the Middle Ages, however, took it out of the public spotlight, until, little by little, only its inhabitants remained.

With the birth of tourism and the growing interest in discovering corners of our country, Roda de Isábena has once again become the talk of the town. It is a beautiful medieval town that preserves vestiges of what it was and that can boast of being the smallest place in Spain to have a cathedral: the cathedral of San Vicente martyr.

Sallent de Gállego, the town that has it all 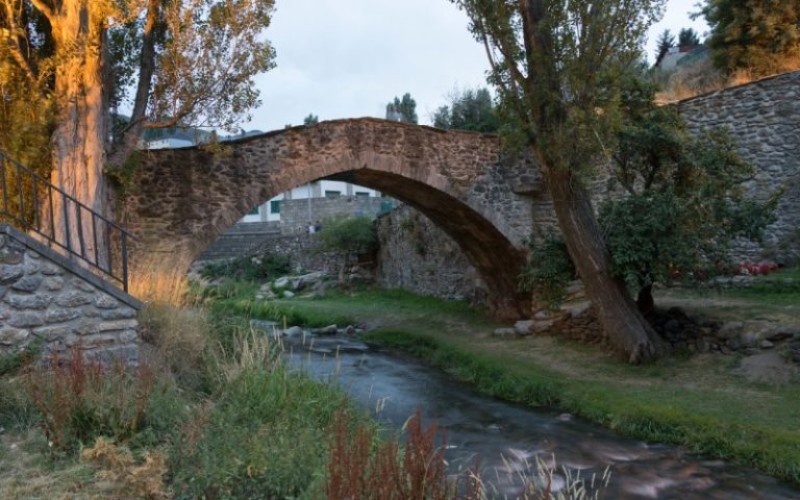 Sallent de Gállego is one of those villages that have the gift of offering the visitor a quiet, enriching visit in constant contact with nature. Although there are many activities to do in the area, the most satisfying experience starts with a walk through its streets. Those narrow, stone streets that lead to spots such as a Gothic church built in the sixteenth century. Not in vain it is one of the heads of the Tena Valley, which is accessed through the beautiful Biescas and Foz de Santa Elena. A singular environment as shown by its Serrablo churches.

Returning to Sallent, it should be noted that nearby is Aramón Formigal-Panticosa, the ski resort with more skiable kilometers of the whole country. In the winter months, therefore, Sallent de Gállego is the place to be. Also, nearby is the Panticosa spa with its lagoon and other glacial lakes as spectacular as Piedrafita.

Torla-Ordesa, the welcome to the National Park of Ordesa and Monte Perdido 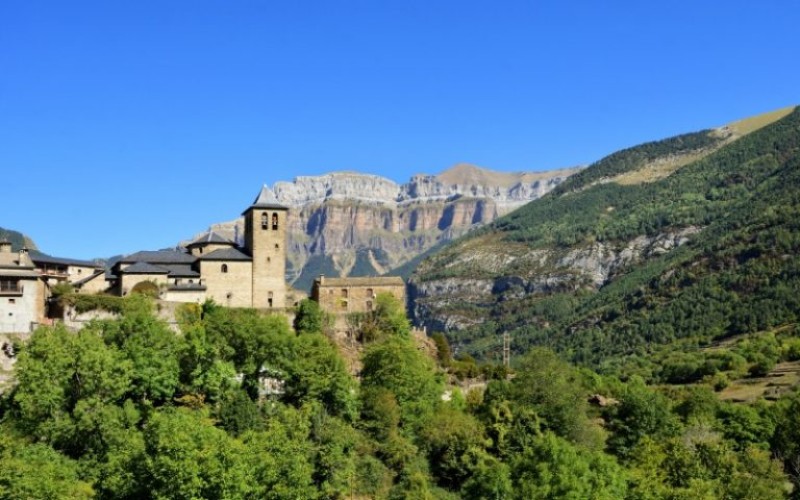 Torla is the perfect destination for hiking enthusiasts. | Shutterstock

These lines can conclude almost as they have begun. Torla-Ordesa surprises three times: with its complete postcard with nature, in a first contact with the locality and, finally, discovering its details. All in all, it is a always surprise, a town wherer you feel like visiting and exploring.

It is also the entrance to the Ordesa valley, the welcome to one of the most important national parks in the country. Also, the perfect start for any mountain adventure. Torla-Ordesa, like many other villages in Huesca, sums up well what a Pyrenean experience is all about.