The A-3, also known as the Autovía del Este, is one of the six radial motorways in Spain. It was built with the aim of replacing the N-3 road, whose original name was E-901 N-III. The A-3 is the motorway that connects Madrid (leaving from Plaza del Conde de Casal) and the Valencian Community (province of Valencia).

We will then make a tour of the towns that we will find along this route on the road known as the Valencia road, stopping to see its most emblematic monuments. 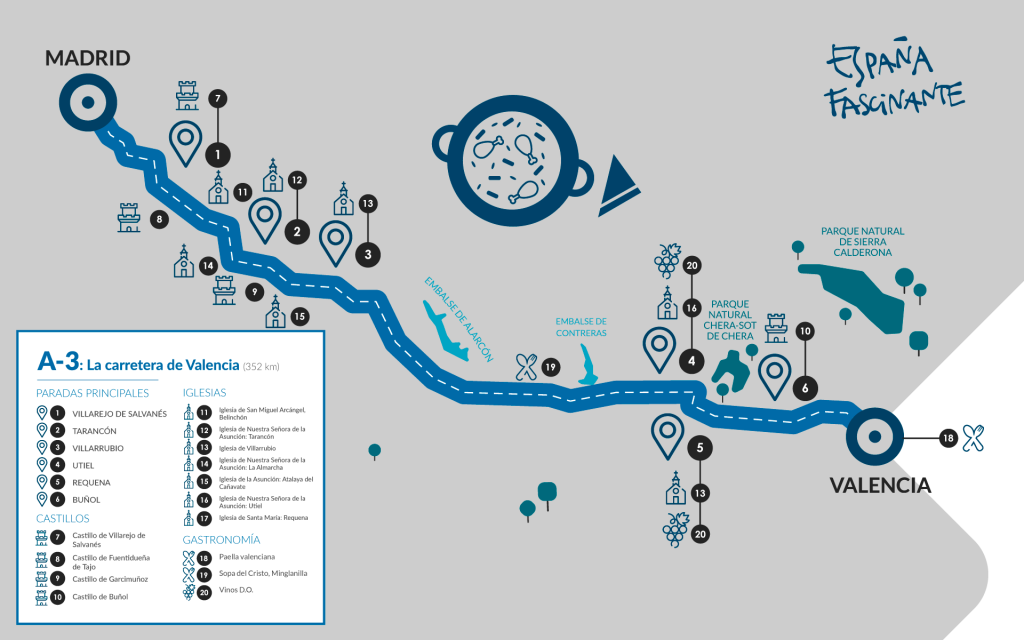 Map of the Valencia road

At kilometre 48 of the A-3 we will make our first stop, specifically in the town of Villarejo de Salvanés. We are still in the Community of Madrid, which has several interesting locations to visit. Villarejo de Salvanés is one example. According to the last census, the town has 7,335 inhabitants and a heritage that is worth the trip. Among the different monuments that can be seen here, the castle stands out.

In this way, the castle of Villarejo de Salvanés is a fundamental part of the town’s Historic-Artistic Site. It is a unique architectural example in Spain because, although it only preserves the keep. Normally in military architecture the cubes are grouped together on the edges, but here they remain on the sides, which makes it a unique case. The castle of Villarejo de Salvanés has been restored and it is possible to visit the interior. Together with the Casa de la Tercia and the Church of San Andrés, it forms part of the Historic-Artistic Site.

The next municipality on the A-3 is Fuentidueña de Tajo, at kilometre 63. This municipality in the Community of Madrid is another of the stops we will make on this route. There are several places of interest to see in Fuentidueña de Tajo, but the most important is the castle. Overlooking the village on top of a hill, it is also possible to see it from the A-3 motorway.

It is popularly known as the castle of Santiago because it was linked to the Encomienda Mayor de Castilla of the Order of Santiago, a military and religious order. However, it is also known as the Tower of Los Piquillos or the Tower of Doña Urraca, names which allude to the keep, the element in the best condition of the fortress. The wife of Alfonso I of Aragon, Queen Urraca I, lived there. The people called her its owner.

This was combined with the presence of a spring on the hill where the castle was located. From this union was born the name of the town. As its condition is not the best, it can be seen from outside and you can take the opportunity to visit Fuentidueña de Tajo.

At kilometre 157 of the A-3, we find the municipality of Castillo de Garcimuñoz, in the province of Cuenca. With less than 200 inhabitants, it is a perfect place to rest and stretch your legs.

Although it sounds redundant, Castillo de Garcimuñoz castle is a fortress built by order of the Marquis of Villena, the master Don Juan Pacheco. It was built in the second half of the 15th century, on the site of the ruins of an alcazaba.

Although it is currently deteriorated, it is still a striking architectural work. With a style that moves between Gothic and Renaissance, although the interior is destroyed, the buildings in the basements, used in the 19th century as a cemetery, are still standing. In 1974, when this old cemetery was being cleaned up, the remains of a first fortress were discovered. The water pipes and the cistern of the castle are still preserved.

At kilometre 317 is the municipality of Buñol in the province of Valencia. The town is known for the festival of La Tomatina, although it also has a remarkable architectural heritage, such as the spectacular Castle of Buñol. Located in the centre of the town, it is a Christian fortress where there was previously an Islamic settlement.

The Castle of Buñol, declared a Site of Cultural Interest, has a strategic location; as it is on the border between the Kingdom of Valencia and the Crown of Castile. As far as the design of the fortress is concerned, the keep, which is about 30 metres high, is particularly noteworthy.

The Parish Church of San Miguel Arcángel is one of the Gothic style churches you will see on this road trip along the A-3 Madrid-Valencia. Specifically, we will make a stop at Belinchón, kilometre 74, passing through Cuenca. Its size is striking, as it is perhaps not what you would expect in a village of 350 inhabitants.

Built in the 16th century, it stands on the remains of the old Arab fortress “Balsum”. The Church of San Miguel Arcángel has been declared a National Heritage site. Its structure is in the style typical of the column churches of the Priorat of Uclés, made in late Gothic. However, it has a striking Renaissance façade.

We continue to cross the province of Cuenca until we reach Tarancón, at kilometre 83. Tarancón is known as the second most populated municipality in the province, and this is demonstrated by the monuments to be seen in the town, such as the Palace of the Dukes of Riánsares (the seat of the town council), the Monastery of the Padres Somascos or the Arco de la Malena (the only remaining part of an old defensive structure still standing), among others.

Without a doubt, one of the most spectacular monuments to see in Tarancón is the Church of Nuestra Señora de la Asunción, declared an Asset of Cultural Interest. It dates from the 16th century and has a large Plateresque altarpiece presiding over the main altar. It is located in the oldest quarter of Tarancón, called El Castillejo. Although its origin is Gothic, its factory is in the 16th century Herrerian style. 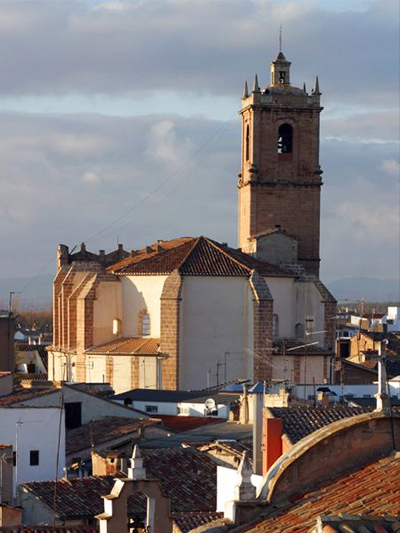 At the beginning of the Civil War, an organ and a Baroque altarpiece were burnt down there. The building was used as a Municipal Market, so that it was protected from the bombing. 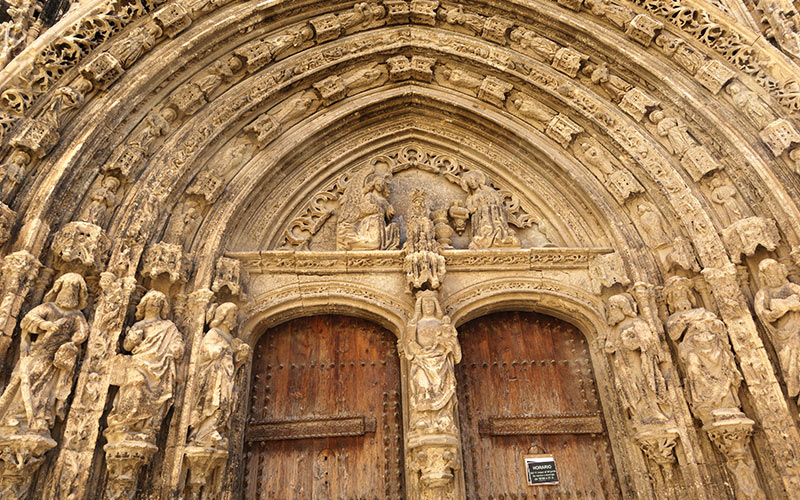 In the municipality of Requena, Valencia, kilometre 289, you will find the Church of Santa Maria, a very beautiful temple declared an Asset of Cultural Interest. A tribute to the Assumption of Our Lady, the church is in the Isabelline flowery Gothic style and its interior is Baroque. The façade is dominated by the entrance whose theme is the Annunciation.

In the province of Valencia you have to stop and visit the old town of Utiel, at kilometre 275. This way, a walk through the old town centre is the perfect excuse to stretch your legs and have a drink in one of the many bars and restaurants you will find here. This corresponds to the medieval town developed in the 14th and 15th century. Its historical evolution as a Muslim fortification and later Christian reconquest has led to the composition of three different spaces.

On the one hand, the Muslim quarter. This is the oldest part that concerns the Muslim fortification. The streets are narrow and there are many dead ends. On the other hand, the Christian quarter, made up of several streets that lead to the Plaza de la Villa. This space has a high historical and artistic value. Here you can find the most important buildings in the town, such as the Town Hall or the Church of Nuestra Señora de la Asunción. Finally, the Jewish quarter, established in different streets.

Requena is an essential stop on this road trip via the A-3, kilometre 289. The best thing is that practically everything there is to see in Requena is in the Barrio de la Villa, the oldest quarter of the municipality. From the Almohad period the district maintains the urban structure in line with Spanish-Muslim cities. The Barrio de la Villa is surrounded by a wall made up of defensive towers and entrance gates. Such is its importance that it has been declared a Historic-Artistic Site. 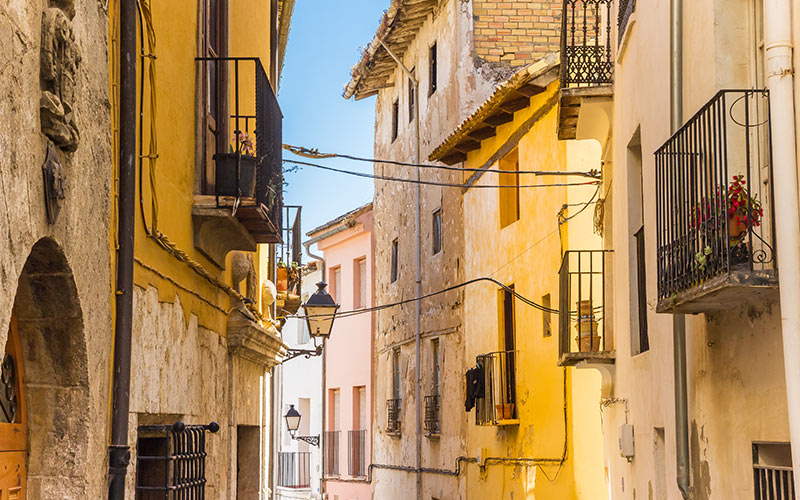 Some of the monuments that you can see in the Barrio de la Villa of Requena are its streets and alleys full of charm and points of interest, the noble houses, the caves of La Villa that run through the subsoil of the Plaza de La Villa… Neither should you miss the hermitage of San Sebastian or the Church of Santa Maria, among other spectacular temples that you can see in Requena. The Palacio del Cid, where legend has it that the Cid Campeador lived, the Jewish quarter and the Alcazaba are another must-see. You will need several hours to get to know the complex. In the restaurants of Requena you will be able to enjoy a very local cuisine. 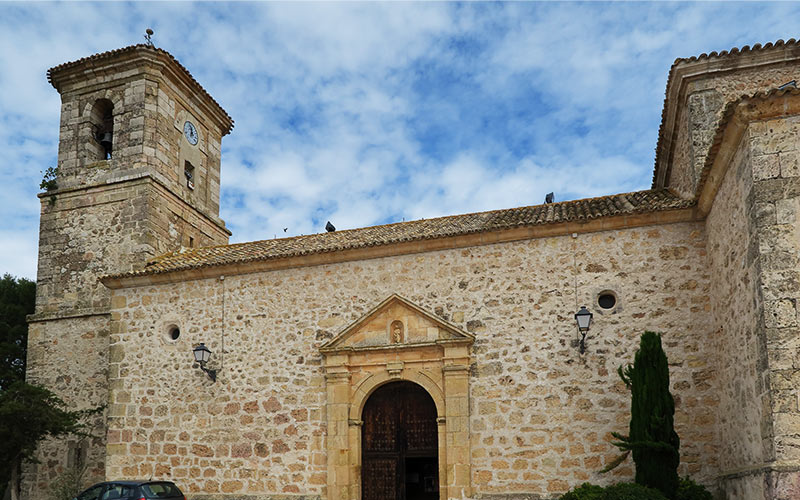 It is worth making a stop in La Almarcha to enjoy the parish church of Nuestra Señora de la Asunción, at kilometre 154. In the region of La Mancha Alta, this Cuenca municipality of nearly 400 inhabitants is located. The church stands out for its size, which predominates over the rest of the village. With a Renaissance style, at the beginning the church only had two naves. In the 18th century it was restored and a third nave was added, giving the structure a neoclassical appearance.

Inside the church, the Romanesque baptismal font stands out, with a height of 0.90 metres. In addition, the mayors of Moya are buried in the Santísimo chapel. Here there is an 18th century entrance finished with their coat of arms. On the other hand, the main altarpiece of the church symbolizes the assumption of Mary to heaven.

Atalaya del Cañavate could well be another stop on this route along the A-3. This municipality of Cuenca is located near kilometre 177 and the most important thing to see there is the Church of La Asunción, made of masonry. On the western side there is a Renaissance façade. A very picturesque temple.