In the Toledan part of the triple crossroads between this province, Ávila and Cáceres stands the curious castle of Oropesa. A complex that, depending on how you look at it, will give you a completely different view. For example, that of a military fortress of clear Arab origin. Although if you change the angle, you will see a Christian one. There is a palatial part next to it. Just by observing it, it is clear that the history of this building has been busy. Today a parador, it was the point from which the Álvarez de Toledo exercised one of their first titles. 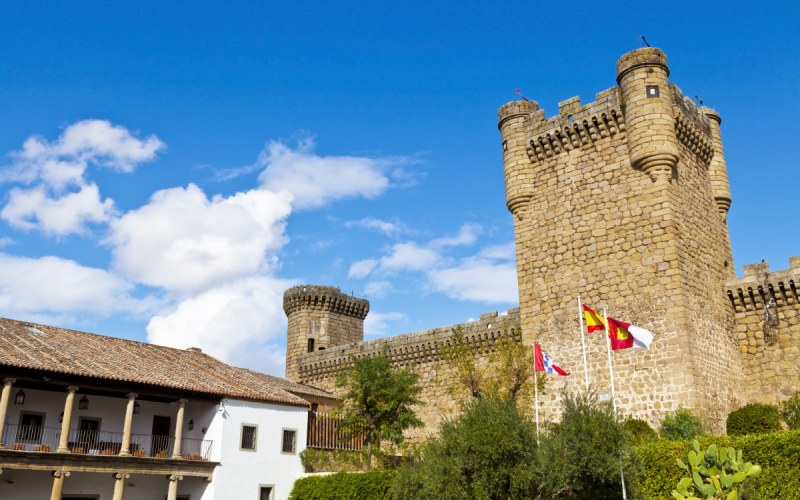 From the old to the new Oropesa Castle

The complex history of the Oropesan monument has an epilogue that predates the Middle Ages. On the hill on which it sits, overlooking Campo Arañuelo, it is believed that there was a Roman enclave. In turn, there are indications of an even older Celtiberian room. Be that as it may, the current complex came into existence in the 12th/13th century at the hands of the Muslims. They would have erected the Old Castle, a fortified rectangle. Segments of walls and a couple of towers are associated with this period. 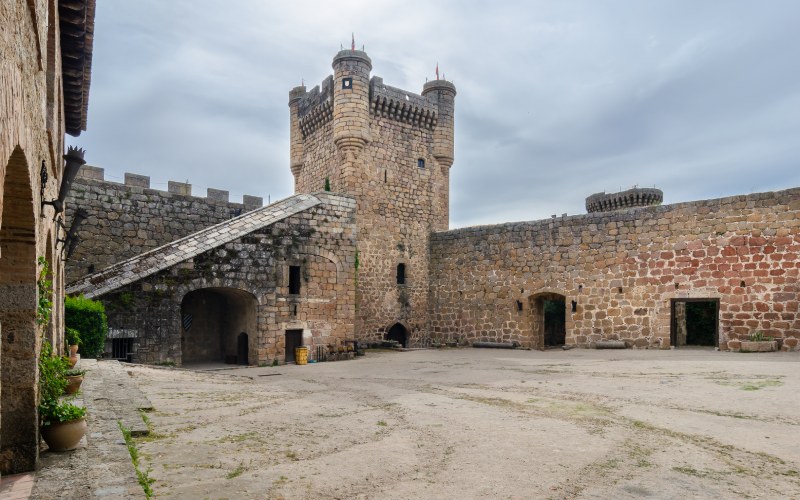 Parade ground of the New Castle of Oropesa. | Shutterstock

The place changed hands several times, but always stood out for guarding the road to Extremadura from the plateau. A strategic position that led to the reinforcement of the original complex. However, the most outstanding event that affected it was the appointment of García Álvarez de Toledo as the first Lord of Oropesa in the mid-14th century. This was a reward for his resignation as Master of the Order of Santiago. Some time later, his heirs would see their dignity increased to counts, while the lineage became one of the most successful in Spain.

In this way, the pre-County consolidation of the power of the Toledo family, as they were known until the 19th century, led to the creation of the New Castle from the beginning to the end of the 15th century. It was built next to the previous one in Gothic–Mudejar style. It is striking that the towers surrounding its parade ground are quite different. For example, at one vertex a powerful square tower is shown to be imposing. However, the keep is the most notable. Squared and 25 meters high, its corners show eye-catching defensive sentry boxes. The staircase leading to the upper levels and the adarve is perhaps the most beautiful element of the fortress. 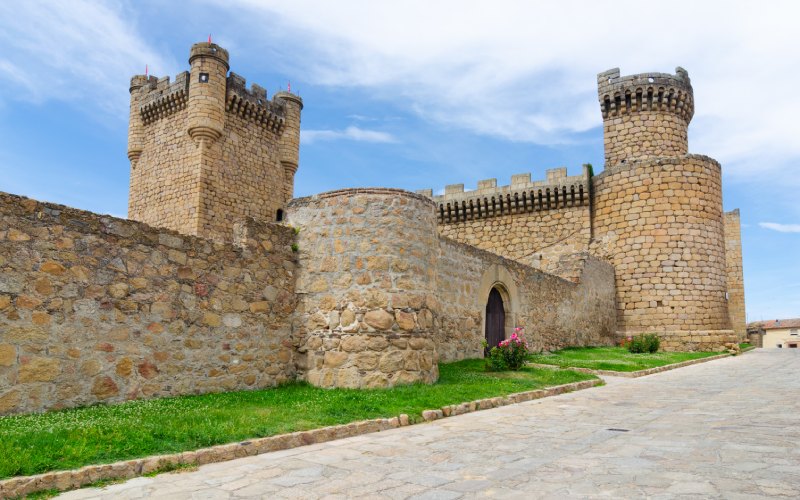 However, the Oropesan branch of the Toledo family also wanted to be comfortable in managing their affairs. Thus, it began to elevate palatial spaces attached to the fortress. A complete plan. Once again, there are a couple of palaces, the Old or Doña Elvira and the New. Originality is not the key to the nomenclature of Oropesa Castle and its annexes, so it can be a bit confusing. 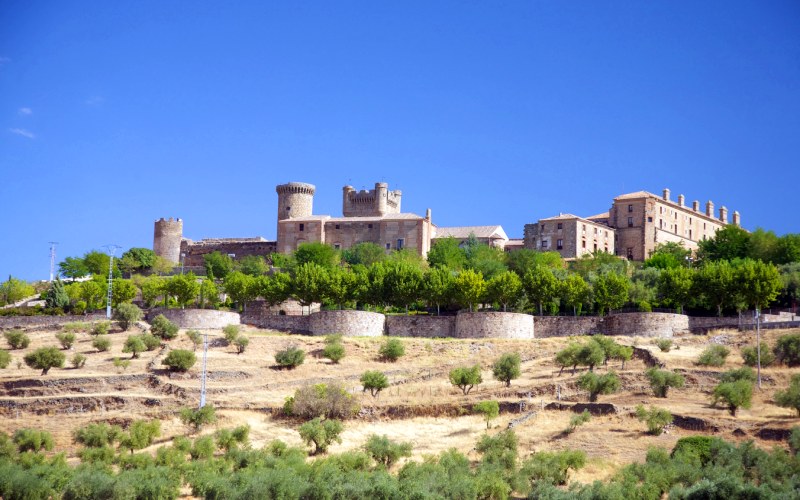 General view of the palaces and the Castle of Oropesa. | Shutterstock

Mudejar Gothic and from the end of the 14th century onwards, Doña Elvira’s palace gradually expanded almost as an extension of the northern wall of the Old Castle. It was named after the wife of the second lord of Oropesa. The ascended Alvarez de Toledo, who also had to pay attention to Tornavaca and Jarandilla, other lordships obtained by Garcia, developed here. They continued to use it, enlarged, in their Count’s time, from 1475 onwards. 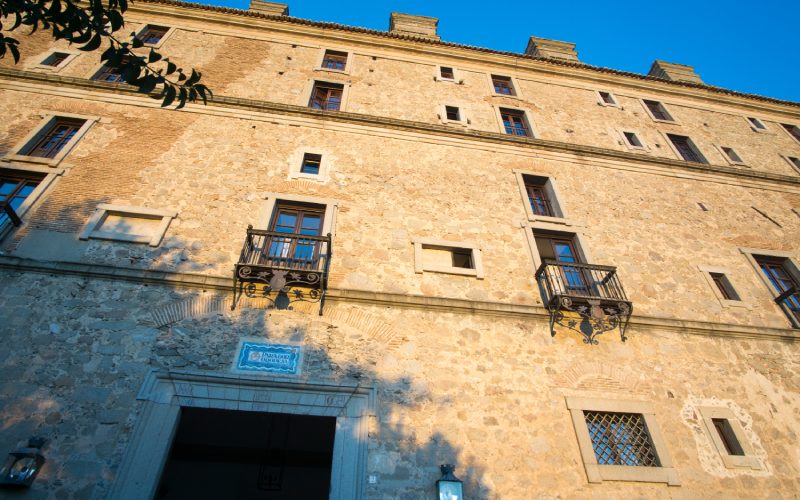 Façade of one of Oropesa’s palaces in Toledo. | Shutterstock

Perpendicular to the previous one, forming with the castle the third side of an enormous rectangle, the New Palace appeared. It was Juan Álvarez de Toledo y de Monroy, the 4th Count of Oropesa, who chose to erect the building. The construction took place between the end of the 16th and the beginning of the 17th centuries. During this time he was a close servant of Philip II, to the extent that the latter commissioned him to take the remains of relatives, including Charles V himself, to El Escorial. Francisco de Mora was the architect in charge of the project, giving it a pleasant and stately Renaissance character. A sign of identity of this Herrerian disciple. 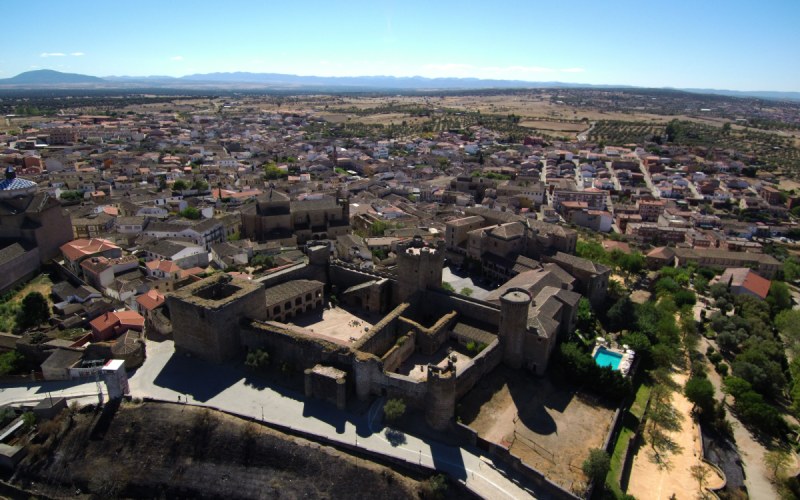 Oropesa Castle from the air. | Shutterstock

From a county seat to a pioneering parador

The place of power remained as such until the 19th century, when the majorat of the House of Toledo was abolished. The decline was total. War of Independence did not help either. During this, the French army wreaked havoc on the structure. Other uses of Oropesa Castle included the Civil Guard barracks and the bullfighting ring. In spite of this, it managed to hold out until its great opportunity arrived. 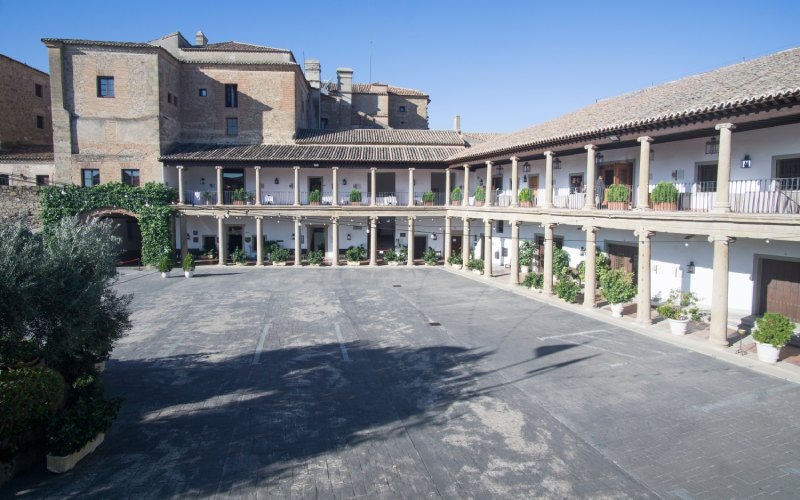 In 1930, a section of the castle was ceded by the town council to serve as the headquarters of one of the first Paradors in a monumental setting. The inauguration was a great success and included personalities such as the Marquis of Comillas. The concept went well until another war, the Civil War, destroyed the place. Despite this, it managed to take off in 1966, when the fortress-palace complex was consolidated as a Parador. Since then it has served as a residence for people passing through, favoured by its location a stone’s throw from such interesting places as the Sierra de Gredos or Monfragüe. A much better ending than ruin for the multifaceted building.

The most fascinating places in Sephardic Spain
[vc_row][vc_column][vc_column_text]There was a time when Spain was an amalgamation of three cultures. Christians, Muslims and Más información