The Valencian province stands out for the variety of travel options it offers. The enviable alternatives of sun and beach are joined by a great wealth of heritage and culture. A truly remarkable mixture that is often ignored, given the typical image of wide and beautiful sandy beaches. Luckily, it is easy to explore its corners and its people by visiting the most beautiful villages in Valencia. Environments full of history, with a magnificent gastronomy and much to see, either inland, facing the sea or combining both. 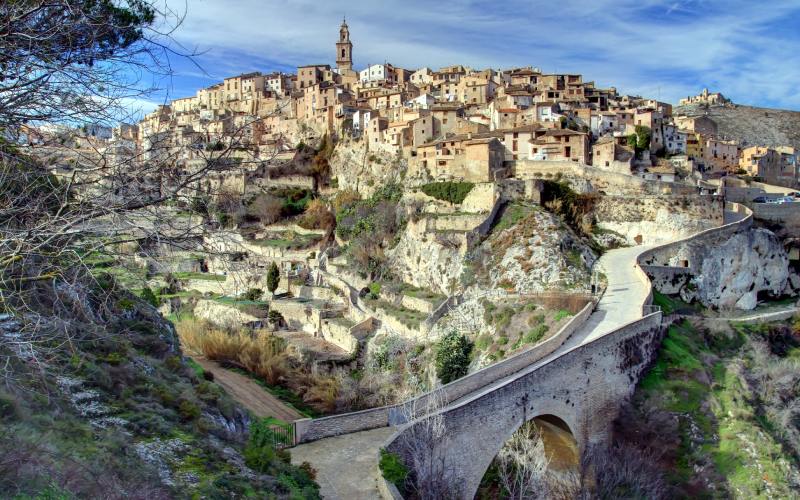 Aerial view of the town of Bocairent. | Shutterstock

Bocairent is located at the southern end of the province of Valencia, in the region of the Albaida Valley. That is, on the northwest slope of the Sierra Mariola. Its old town has been declared a historic-artistic site thanks to the spectacular layout of its streets, in the purest Arab style. The most visible local symbol is the Parish Church of the Virgen de la Asunción from the 16th century, originally Gothic and later adapted to the Baroque. It contains works by Juan de Juanes, José Segrelles and Joaquín Sorolla. Another monument of interest is the tower of Mariola, a watchtower from the 11th century that has been declared an Asset of Cultural Interest.

In the surroundings it is also possible to visit the Covetes dels Moros. These are artificial caves, or cave-windows, from the 10th or 11th century. There are various interpretations of their use, but it seems to be generalised that they were security granaries-warehouses of the Andalusian period. Nature lovers should not miss a walk in the Sierra Mariola, which was declared a Natural Park in 2002. 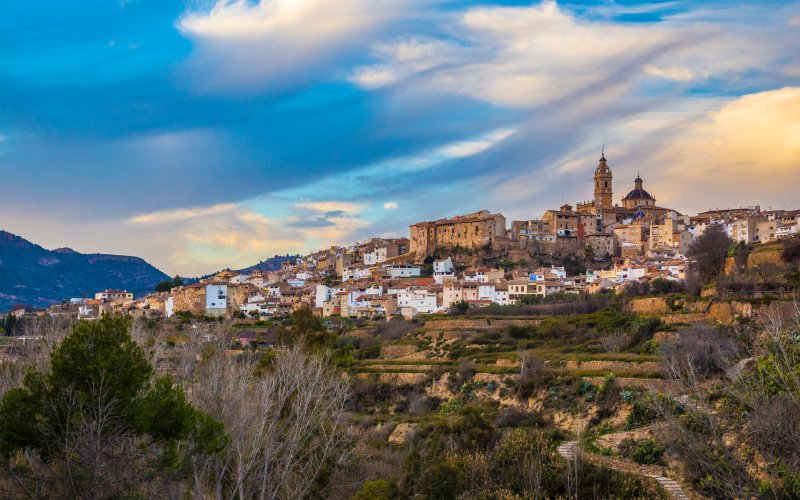 The village of Chelva is located in the interior of the province, specifically in the region of Los Serranos, also known as Alto Turia. The first remains of the town date back to Neolithic sites. Since then, it has captured a rich variety of cultures in its constructions. Not in vain, for years Muslims, Jews and Christians lived together in its streets.

The main recommendation is to take the so-called “Ruta del Agua” (Water Route), which combines nature and culture in a two-hour itinerary. It visits the four historical districts of the town and the most unique places of the river Chelva. This pleasant two-hour tour passes through the Plaza Mayor, the Arab quarter of Benacacira, the Molino Puerto, the Caves of Montecico, the factory of La Luz, the Moorish quarter, the Jewish quarter or the pass and the dam of Olinches. 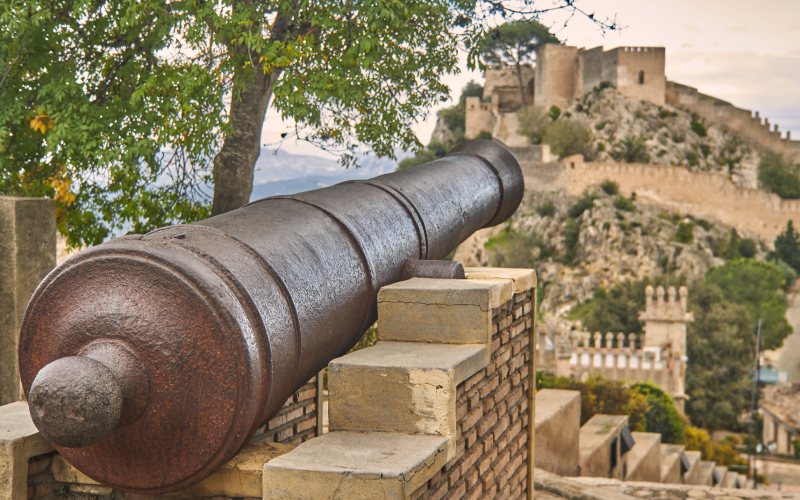 Along with Orihuela and Valencia, the town competed to be the most important city in the province in ancient times. It became an episcopal see during the Visigothic period and the cradle of the Borgia family. Located in the south of the province, in the north of the Central Regions, Xàtiva is the regional capital of La Costera. Nearby is one of the oldest settlements on the Mediterranean coast, the Cova Negra, dating from the Middle Palaeolithic.

A must see is the castle of Xàtiva, witness to numerous conflicts and divided into the Castell Menor, built on Iberian and Roman remains, and the Castell Major, a later extension. Important during the campaigns of Hannibal and in the period of Al-Andalus, it played an important role in the times of the Kingdom of Valencia. During the War of Succession they took sides with the Austrias and for that reason Philip V ordered to set fire to the city. That is why in the city museum the portrait of the monarch is hanging upside down. 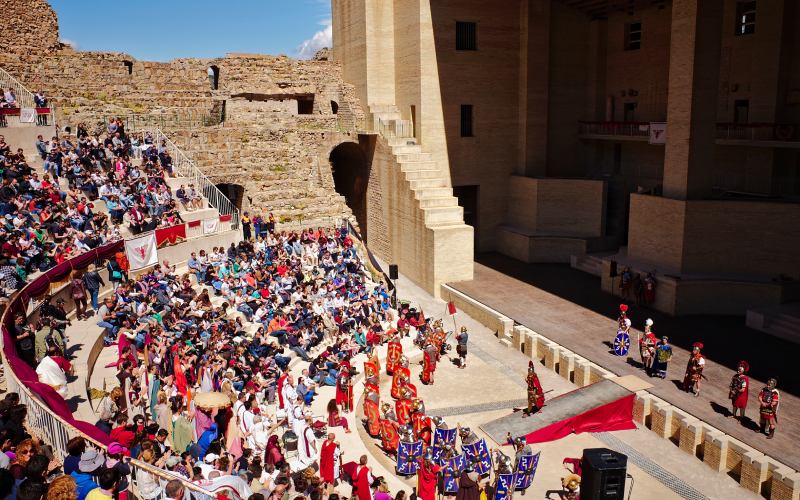 Sagunto is one of those towns that bear witness to the legacy of the past. Like many other Mediterranean towns, it offers a walk through the cultures that flourished in the sea. The capital of the Camp de Morvedre region, in the north of the province of Valencia, has two main centres. One is the historical centre and the other is the Port of Sagunto. The first expands at the foot of the castle and the Roman theatre. Thus, its origins go back to the second Punic War. The chronicles of the time indicate that the Ibero-Edetan city was besieged by Hannibal in 219 BC.

This culture, mixed between the sea and the mountains, allows us to enjoy both its beaches and cultural events, such as the Fallas and the Holy Week. It is also the place of origin of one of the most important steelworks in the Mediterranean. Architectural evidence of this is the factory of Altos Hornos, which has the first industrial monument in the Valencian Community. 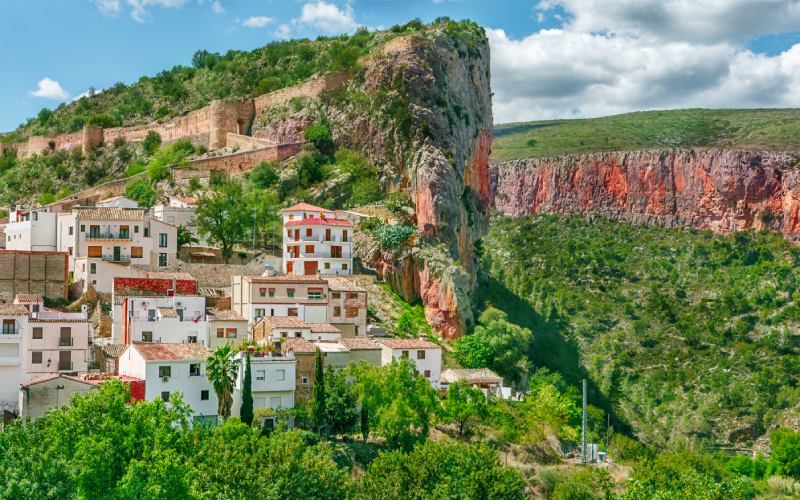 This small village has positioned itself as a haven for climbers thanks to its rugged mountain setting at the foot of the Chera-Sot de Chera Natural Park. Located in the region of Los Serranos, only 60 km from Valencia, also highlights its beautiful old town. In addition to the castle, which has been declared a Historic-Artistic Monument, you can visit the parish church of Nuestra Señora de los Ángeles or the hermitage of Santa Bárbara. Although undoubtedly, Chulilla stands out for the beauty of its natural landscapes. Especially notable is the impressive Hoces de Chulilla canyon, with walls up to 160 metres high. 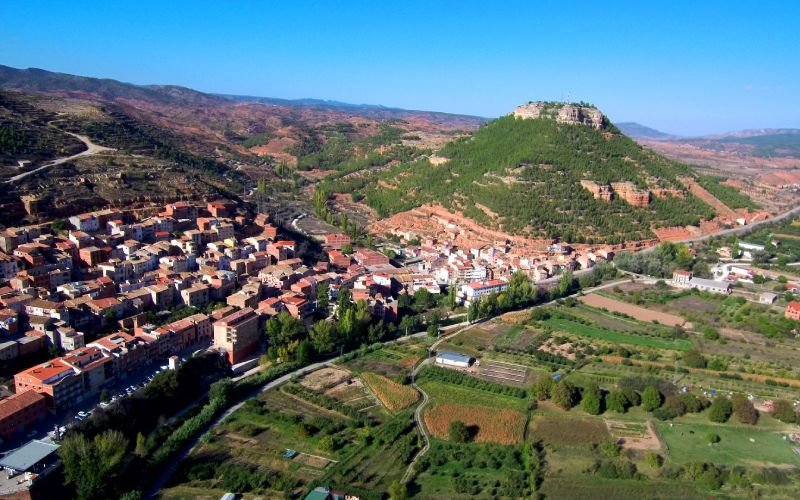 It is the turn of another small town in Valencia. This time it is located in the region of El Rincón, in the foothills of the Sierra de Javalambre. Its differential factor lies in the fact that it is located outside the limits of the province of Valencia, between the autonomous communities of Aragon and Castile-La Mancha. With two thirds of its space covered by vegetation, Ademuz is the green lung of the Valencian Community.

The river Bohilgues, one of the most crystalline in the province, is its main attraction. However, the views from Pico Castro cannot be ignored either. On the other hand, its old town offers the visitor several interesting buildings. The José Maroto Cube stands out, where the vine was once pressed and the wine stored, and which was awarded the First Europa Nostra Prize for restoration in 2011. 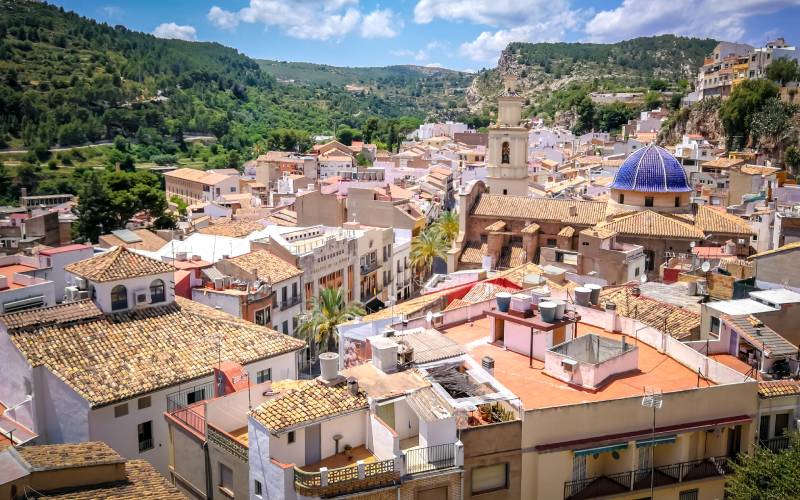 To talk about Bunyol is to talk about the famous “la tomatina” party, held on the last Wednesday of August and in which thousands of ripe tomatoes are thrown among the attendees. Beyond that, this town in the Hoya de Bunyol region began its history in the Paleolithic period. For this reason, it has had time to accumulate plenty of attractions to enter this list. Its historical heritage is really important and includes one of the best preserved castles in the Valencian Community. It is also worth visiting the Church of San Pedro, the hermitage of San Luis Beltrán and several ventas. Its natural surroundings are not to be missed. The Turche Cave with its lake and waterfall, the San Luis Park, the Planell Park and the Fluvial Park, with natural pools where it is possible to bathe, create a magnificent setting. 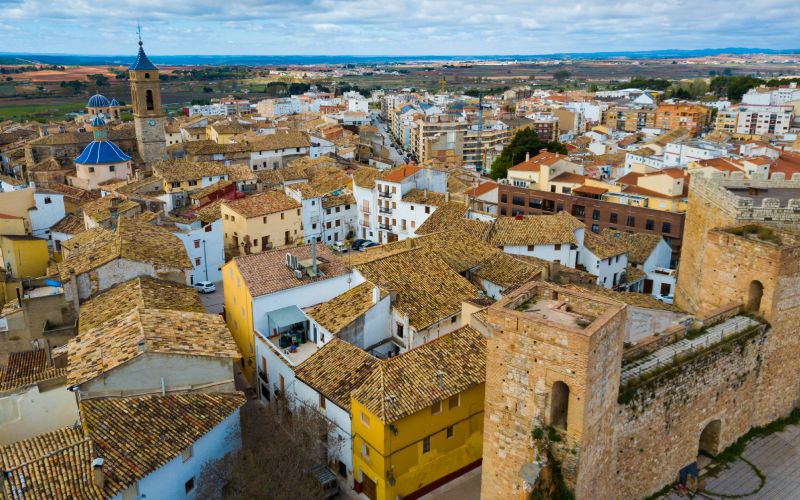 Located in the western part of the province of Valencia, Requena historically belonged to Castile. Today its territory is known as the Castilian Valencia and is the largest municipality in the C.A. Once again, it is a meeting place for different cultures, which have been interacting throughout its history. Under the Plaza de la Villa there are a total of 22 caves from the Muslim period. Their existence caused that during the 15th century the traffic of carts was forbidden in the square. It was not until the 17th century, thanks to the demolition of some buildings, that they could be partly filled in. Now, fortunately, they are empty of debris and it is possible to visit them. The castle with its homage tower, the temple of Santa Maria and the 18th century church of El Salvador in the Isabelline Gothic style are some of the other treasures the town has to offer. Not forgetting, of course, the famous local wine. 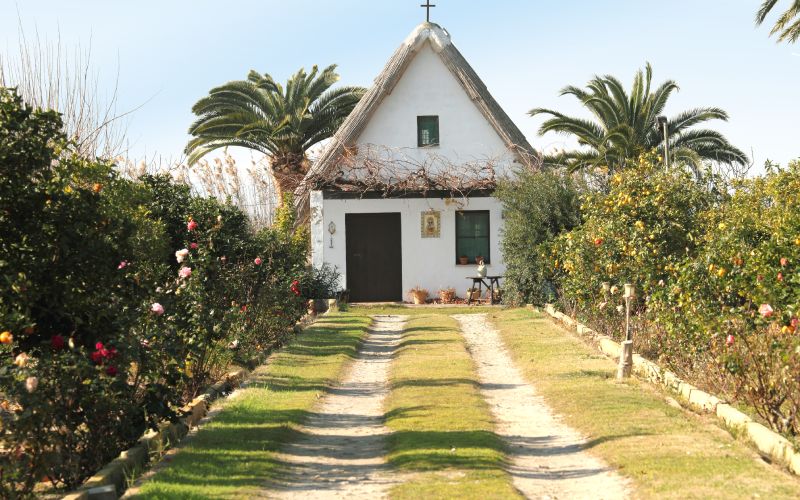 Located a short distance from the provincial capital, within the Albufera Natural Park, El Palmar is a regular destination for fishing enthusiasts. It is one of the best known districts of the lake and was the inspiration for La Barraca, a novel by Vicente Blasco Ibánez. Its origins date back to the Muslim period, when the Llibre del Repartiment by Jaume I names a farmhouse located on the island of El Palmar. The visit to the lake area is in itself quite an experience, but it is also possible to visit the Fisherman’s Home or the Parish Church of El Niño Jesús del Huerto. 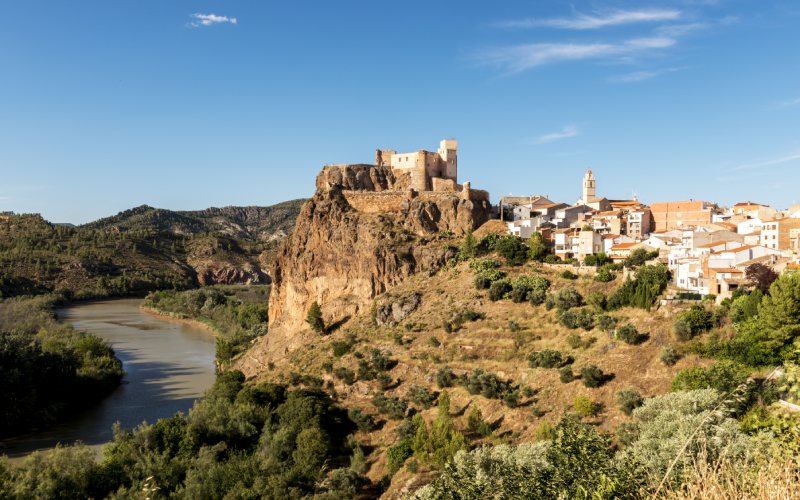 Known for its nuclear power plant, Cofrentes is a reference point for nature lovers against all odds. Its privileged location at the confluence of the Júcar and Cabriel rivers forms a circuit of meanders, sickles and spectacular cliffs, where the Cerro de Aguas volcano stands out. The population dominates the place within the Ayora valley region right on the border of the province of Albacete. In its old town highlights the imposing castle visible from the road. It also has a tourist river route of great interest that reaches Cortes de Pallás. In it, during one hour, the 14 km of the reservoir of Cortes are crossed by boat. 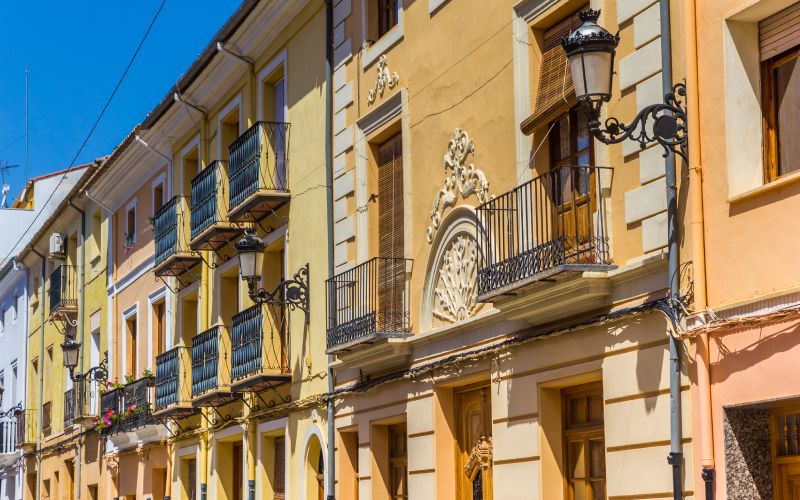 Ayora is located in the Ayora Valley region, being part of the judicial district of Requena. Its heritage is marked by the variety of which it shows off. You can enjoy from the cave paintings of the shelter of Tortosilla, Iberian town, to the castle, through the Ruta del Hilo Rojo. This monumental town has a network of medieval-type streets, as can be seen in the Los Altos district. The ruins of Ayora Castle stand right in the centre of the town and the place has been declared a Site of Cultural Interest.