The city of gorges and contemporary art

The town of Castile-La Mancha is located in a spectacular setting, in the middle of the mountain range and on a rocky platform carved by the gorges of the rivers Júcar and Huécar. An old town full of works of art and a very singular cathedral make up the best thing to see in Cuenca. It also has an interesting offer of contemporary art. A very charming provincial capital.

Plan your stay in Cuenca

The capital of Cuenca is an important artistic and monumental destination. The visit to everything selected in the section “What to see in Cuenca” requires two full days. It is almost essential to stay another day and visit the Serranía de Cuenca Natural Park. The attention is mainly drawn to the Ciudad Encantada and the Callejones de las Majadas. The visit can be accompanied by various options for active tourism.

To fully appreciate this travel guide to Cuenca, one must know its history. This one began during the Arab times. The mohammedans took advantage of the strategic disposition between the mouths of the two bordering rivers. For that, they designed a castle named Conca, insiDe the core of Santaver. The plaza kept growing in importance and population, getting to have a fortress, main square and mosque.

The splendor of the Umayyads favored the city with a thriving agricultural and textile productivity. However, the ups and downs of the Reconquista and the dissapearance of the Caliphate of Córdoba in 1031, turned it into a border plaza. Some time later, and after nine months of siege, on September 21, 1177, Alfonso VIII took possession of it. According to tradition, the shepherd Martín Alhaya managed to get some Christian assailants to cross the gate of Aljaraz covered with sheepskins. They did it confused among the flock with which the Muslim garrison was supplied with meat. Thus, they took the guards by surprise and opened the doors to the rest of the army.

Once the conquest was over, an episcopal headquarter was constituted along with a council. It was governed by the famous Cuenca Fuero. Drafted in 1190, its 950 laws gave it such practical value that it was given to many other populations as well. The king resided in the city for ten years, promoting the works that transformed the mosque into a cathedral. These lasted until the beginning of the 14th century. One of his most notable promoters was Bishop Julián, whose remains were placed in a silver chest in a chapel dedicated to him. He would later be canonized, contributing to the influx of pilgrims to the place. The temple would end up being called the Cathedral of Santa María and San Julián de Cuenca.

As in Muslim times, textile and livestock production gave the city an economic splendour. A clear sign of this is its urban development. This began to extend beyond the walls, with the appearance of the neighbourhoods of San Antón and Tiradores. Within the framework of the disputes between King Alfonso XI and his uncle the Infante Don Juan Manuel, Cuenca became part of the lordship of Villena for some years. However, later it became the property of the Crown again.. 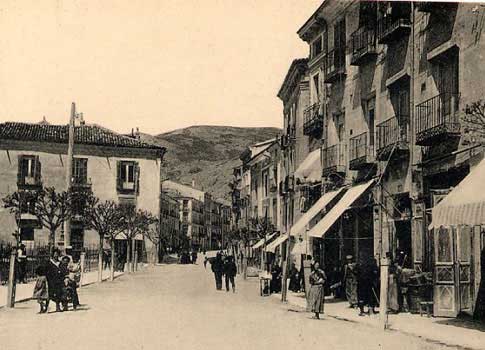 During the XV and XVI centuries, nobelty and Church would give the city a construction impulse without precedents. Palaces, monasteries, and parishes emerged as a reflection of the political and economical relevance. This caused the attraction of important artists like the polemic “Jamete”. The famous French sculptor built the monumental renaissance facade between 1546 and 1550. The arch of Jamete is the most spectacular element in the cathedral and one of the prettiest to see in the capital of Cuenca.

Unfortunately, only one century later, the fall of the clothing industry would take Cuenca to an enormous economic and demographic decadence. The crisis lasted until the 20th century. In July 15th 1874 one of the most unusual stories happened. Cuenca was raided by the Army Carlista del Centro. It was commanded by Infante Alfonso de Borbón, accompanied by his wilfe María de las Nieves de Braganza. Their stay lasted a couple of days, but they stripped the town of such way that is was nicknamed the “Saco de Cuenca”.

Much more violent was the destruction and raid of the temples by part of the anarchy militians in July of 1936. Since there was no revolt or armed enemies to who beat, these procedeed to assessinate the rightists and loot the Cathedral. They also took out the remains of San Julian from the chest of silver that contained them. Next, they proceeded to burn them. After a very lenthy and expensive restauration, the city has recovered the impressive historic site. So effective was the restauration that is was declared a UNESCO World Heritage Site.

What to see in Cuenca

A Cathedral with a lot of history

In the Plaza Mayor is the Cathedral of Santa María and San Julián. Despite the many monuments in the city, it is the most impressive thing to see in Cuenca. As mentioned in “History of Cuenca”, it was built from 1182 onwards over the old Muslim mosque. The Gothic-Norman style predominates in the temple. It is a building with a Latin cross structure, three naves and a seven-sided apse. Very original and unique in Spain is the design of the Anglo-Norman style triforium. Decorated with statues of angels, it supports the weight of the side naves over the central one.

Attached to the central block of the building is the beautiful Renaissance cloister (1577), which is worth a quiet visit. It can be accessed through the so-called Arco de Jamete (Arch of Jamete), a magnificent interior façade that surrounds the door and is the most outstanding work of art in the temple. Another important stone doorway that deserves attention is that of the Muñoz Chapel. There are more interesting chapels, such as the Apostles and the Holy Spirit Chapels. One of the most interesting elements of the building are its grilles, especially those of the Main Chapel and the Knights’ Chapel. The doors of the Chapter House, another place of great beauty to be seen in Cuenca, are the work of Berruguete.

The Cathedral of Santa María and San Julián was sacked in 1936 by the militia. As a result of the destruction, most of their images disappeared. Of those that remain, the most important is the Dolorosa by Pedro de Mena, located in the altarpiece of the main altar. The Cathedral Treasure can be visited in the temple itself and in the Diocesan Museum, where part of its collection is kept.

Many important Convents and Churches

In the same square is the Town Hall, dating from 1733 and in the Baroque style. Also the Convent of the Petras, a building from the same century. Nearby, in San Pedro Street, are many of the buildings you will see in Cuenca. A good example is the Casa del Canónigo, a Gothic linteled construction. The Convent of Las Angélicas, attached to the Church of San Nicolás de Bari, and the Convent of Carmelitas Descalzas (17th century) are also noteworthy. The latter houses the Universidad Internacional Menéndez Pelayo and the Fundación Antonio Pérez, with an interesting collection of contemporary art. 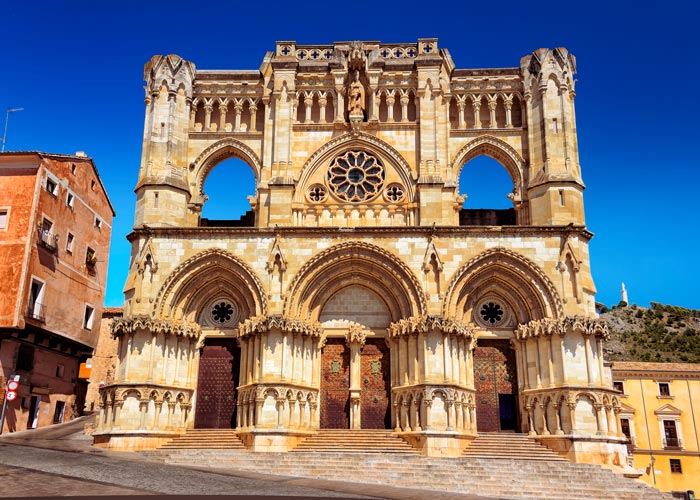 In the peculiar Trabuco Square is located the Church of San Pedro. Besides the cathedral, it is the most representative temple of the city and therefore something to see in Cuenca. Of Romanesque origin, it was reformed by Martín de Aldehuela in the 18th century. Its octagonal floor plan and the impressive Mudejar coffered ceiling that decorates the interior of one of its chapels stand out.

On the way to the Júcar viewpoints is the Church of San Miguel. A magnificent building from the 12th century, today it has been converted into an auditorium. The old Convent of Los Descalzos, with a votive cross on which several popular legends run, and the sanctuary of Nuestra Señora de las Angustias complete the heritage of this area of Cuenca.

Calle de Alfonso VIII, another access to the Plaza Mayor, shines with its colourful facades. The road also preserves two magnificent 17th century mansions: the Casa del Corregidor and the Casa de los Clemente Aróstegui. Both of them have a very good ironwork. There are two other places you must see in Cuenca: the Seminary of San Julián, with a beautiful baroque façade, and the Tower of Mangana, built on the ruins of the old fortress.

Crossing the arch of the wall’s gate one comes across the San Pablo Bridge. It is the most significant example of industrial architecture in Cuenca. From it you can get the best views of the Casas Colgadas (Hanging Houses). Next to the cathedral, they are the symbol of the city and an essential monument to see in Cuenca. They were built in the Middle Ages and at present only the Casa de la Sirena and the Casa del Rey remain. 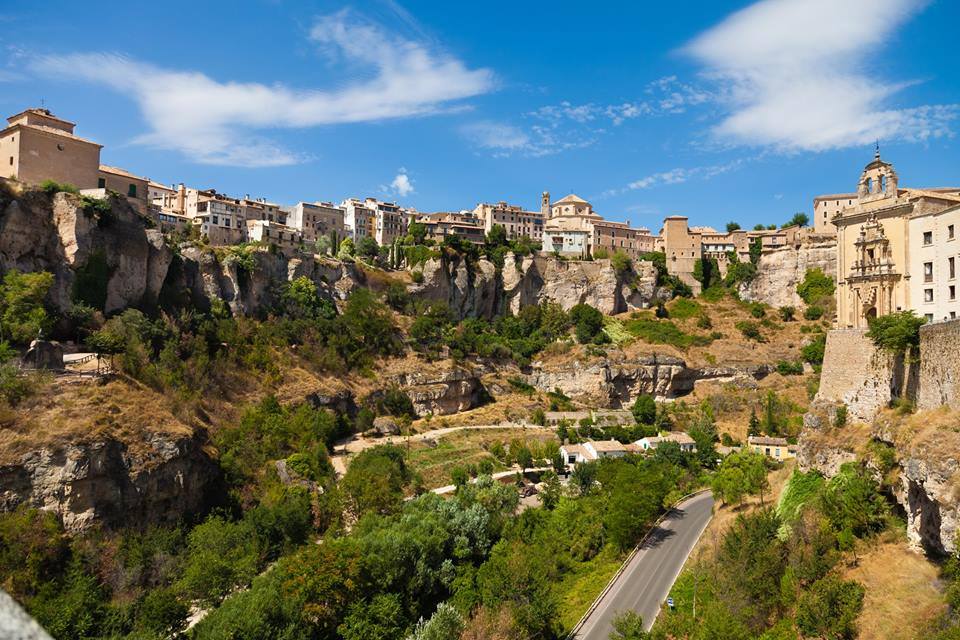 Other peculiar constructions to see in Cuenca are the skyscrapers. This is a group of buildings whose entrance, on Alfonso VIII Street, has a very different appearance to the rear facade. This one precipitates on the Hoz del Huécar, generating a wall of eight or ten plants.

The San Pablo Bridge ends at the San Pablo Convent, built in 1523 taking advantage of the rocky structure of the gorge. It is worth mentioning here the magnificent Rococo doorway and the Church, of decadent Gothic style. At present, the building has been restored and converted into a Parador Nacional.

There is an important range of museums to see in Cuenca. In the Hanging Houses is the Museum of Spanish Abstract Art in Cuenca, with its excellent collection of paintings and sculptures by national artists from the 1950s and 1960s. For its part, inside the Convent of Carmelitas Descalzas is the Antonio Pérez Foundation, with works that the artist collected throughout his life. Attached to the cathedral is the Archbishop’s Palace, on whose ground floor is the Diocesan Museum. Opposite is the Museum of Cuenca, with its excellent collection of archaeology. Also in the old town is the Castilla-La Mancha Science Museum. The space is dedicated to explaining various aspects of biology, astronomy or geology through interactive montages.

Castile La Mancha, Cuenca
It may interest you...

Roman villa of Noheda: the largest Roman mosaic in the world is in Spain
During the Roman rule of Hispania it played an important role for both republic and Más información

6 Wonderful Ancient Ruins in Spain
[vc_row][vc_column][vc_column_text]Throughout human history, civilizations have been succeeding each other, succumbing to each other, mixing and Más información