It is considered by many to be a fundamental building in the history of Spain and one of the most impressive to see. The Casas Colgadas (Hanging Houses) of Cuenca, also called the Casas del Rey (“King’s Houses”) or Casas Voladas (“Flown Houses”), are located above the cornice of the Huécar River gorge. In 1966 the walled city of Cuenca was chosen as a World Heritage Site. Only 15 other Spanish towns also have this title. And although the territory is full of magnificent places; this is partly thanks to the three Hanging Houses that still stand in time. Two of them are “Las casas de los Reyes (“The houses of the Monarchs”) and the other is “La casa de la sirena (“The house of the mermaid”).

They were built six centuries ago. And, of course, they have so much history that on October 25, 2016 they were finally declared an Asset of Cultural Interest. They have a unique architecture thanks to their balconies that stand out from the rocky outcrop. Creating that feeling of floating, flying or hanging in the air.

The origin of the hanging houses

In his painting Cuenca from the East, the artist Anton van den Wyndaerde portrayed the Hanging Houses of Cuenca for the first time. It was 1565, and the three hanging houses that we can see today, are the only buildings that are still standing. They were built between the 15th and 16th centuries, although nobody knows for sure their origin. In fact, there is some disagreement among experts about this fact. Some say that the hanging houses in Cuenca are of Muslim origin and others, medieval. 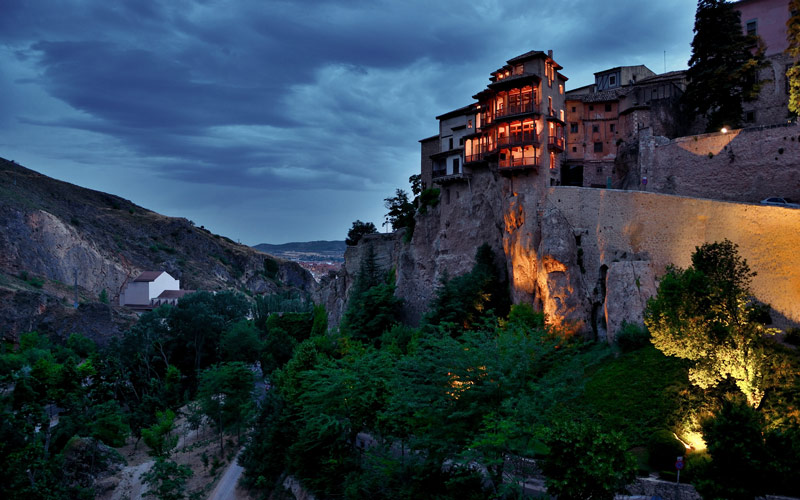 The Hanging Houses of Cuenca at night | Photo: Massimo Frason.

Eight of the hanging houses lasted until the 1920s. There are even photos from the 19th century which show the constructions practically the same as in the painting mentioned above. But due to the destruction of the heritage, it was the town council that decided to buy the only three remaining ones in the 1960s to avoid their total loss.

To get to them if we are sightseeing, the most interesting route we can take is by crossing the also mythical San Pablo Bridge. Also built in the 16th century, it is another of the city’s landmarks. Although it was eventually demolished after 200 years, it was rebuilt in 1903 in the way we can see it. 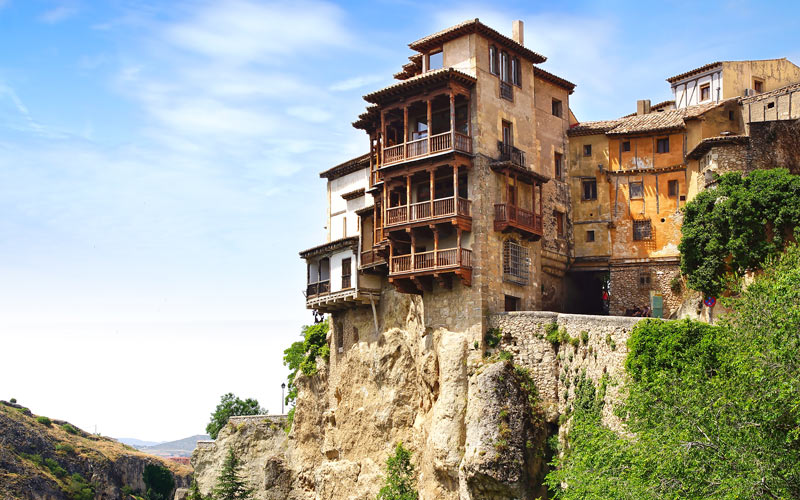 Its architecture is very similar to that of other buildings in the city. But even so, there is none that resembles it in spectacularity. The Hanging Houses of Cuenca have a Gothic style, with pine beams, masonry and plaster mainly. If we look at the façade, we can see the ashlar decorations, apart from the characteristic grilles on the balconies. However, the curious thing is that the hanging balconies were built much later than the house itself. It was in 1927 when they were installed and became a reference point.

Although the Hanging Houses in Cuenca are perhaps the most famous in this type of architecture; the truth is that there are more similar examples in Spain. The most significant are perhaps those in the Tajo de Ronda. Although we can also find similar ones in Albarracín, Girona, Frías or Cantavieja. And, of course, if we travel to Italy, we can enjoy the houses hanging from the Puente Vecchio.

Curiosities about the Hanging Houses

One of the most famous curiosities tells that they are called the Houses of the Monarchs because it was where the monarchs stayed on their visits. And although they were known to house kings, they were a place of refuge for poor people for many years. Such was their fame that even the Mint used the Hanging Houses. It did so to print them on a coin of the old pesetas, even today there is a collector’s edition. As for the House of the Mermaid, there is a legend that has been told since the 16th century. 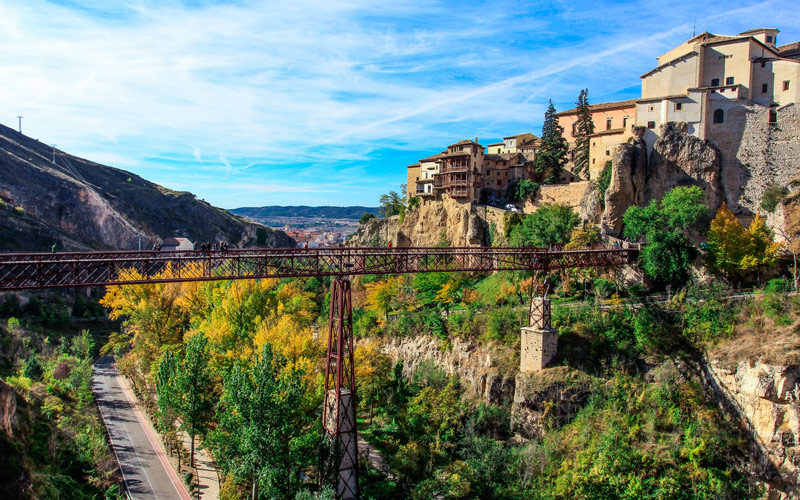 Hanging Houses of Cuenca and the bridge of San Pablo. | Photo: Shutterstock

The protagonist is Catalina, a beautiful lady from Cuenca, who became pregnant by Infante Don Enrique. The latter would later become King Henry II of Castile. He imprisoned Catalina and her son so that no one would know, until he had his son killed. Legend has it that Catalina cried out for her son until one day she threw herself down the gorge unable to bear the pain. The inhabitants of Cuenca said that even after she threw herself, she was still heard. And that those cries resembled the cry of a mermaid.

Although this is not the only legend that exists around these dwellings. In another, it is said that a nobleman met his lover in one of the Hanging Houses. When they were in bed they were surprised by his wife who started to scream. Not knowing what to do, he hit her on the head with a cauldron, ending her life. Having made the situation worse, it only occurred to him to throw her out of one of the windows. And even today, it is said that her ghost wanders around those houses.

It was at the beginning of the 20th century when the town council bought the three Hanging Houses that were still standing. These were The Mermaid’s House and the two Monarchs’ Houses. They wanted to avoid their destruction as had already happened with the previous ones. For some time now, the Mermaid’s House has even housed a restaurant in the annexed part of its interior. This happened in the 90’s and later reforms were planned to improve it. In 2017 an extension was planned to open a new inn, but it has not yet been completed. 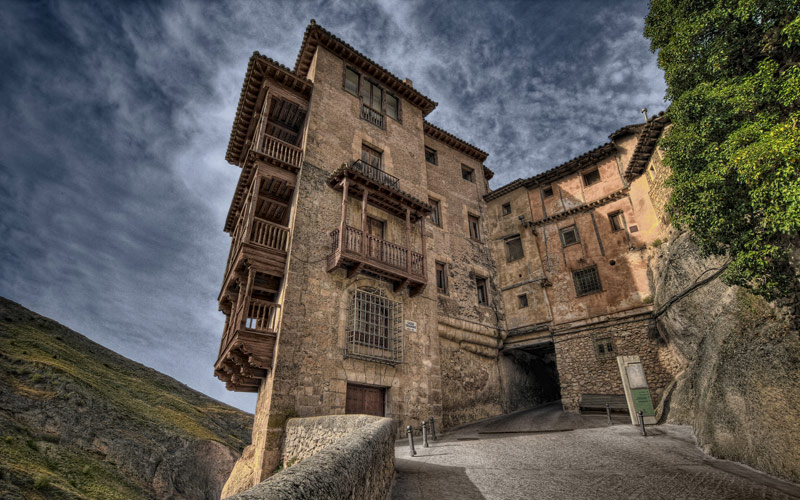 The Hanging Houses of Cuenca at present | Photo: Shutterstock

In 1966 what is still the biggest attraction apart from its own structure was inaugurated. This is the Museum of Abstract Art, the idea and execution of the artist Fernando Zóbel. Who, curiously enough, is also the painter after whom Cuenca’s station is named. Reforms were made in 1976, 1994 and 2016 to improve the facilities with the aim of increasing the number of exhibitions. It currently has more than 1,500 works that are included in paintings, sculptures and printed graphic works.

An average of 40,000 people visit the museum every year. At the moment the site offers both permanent artists and temporary works of art. It is open to the public and is completely free. In addition, special exhibitions and conferences with artists are usually held. A place to keep and admire abstract art, within a classic work of art.

Castile La Mancha, Cuenca
It may interest you...