The monuments of the Asturian pre-Romanesque period are one of the best preserved examples in Spain of the art and architecture of the High Middle Ages. A collection prior to the arrival of the Romanesque style so present throughout Spain. Buildings that offer the opportunity to travel to the past and get to know these forms used in the churches and palaces of Asturias. These formed a unique way of understanding Christianity in this Asturian region.

Some of these monuments are as well known as Santa María del Naranco and San Miguel de Lillo. Recognized as World Heritage Sites, they have become part of the Asturian landscape, of the way of understanding the principality. Thus, this route is a perfect opportunity to discover a key part of the Spanish medieval past.

San Salvador de Valdediós, “el Conventín”, as it is popularly known, is the temple that opens this list of monuments of the Asturian pre-Romanesque period. It was built in the beautiful valley of Valdediós, in the council of Villaviciosa, around the 9th century. Declared a Historic-Artistic Monument in 1931, it stands out for its architectural elements that move towards the Mozarabic style. This can be seen in the use of the alfiz, the frame that surrounds the arches.

This church also stands out for its surroundings, as a few steps away is the Monastery of Santa María de Valdediós, built in the 13th century. This monastery has a beautiful Renaissance cloister which, together with the exuberant nature of the valley, make up a dream postcard. 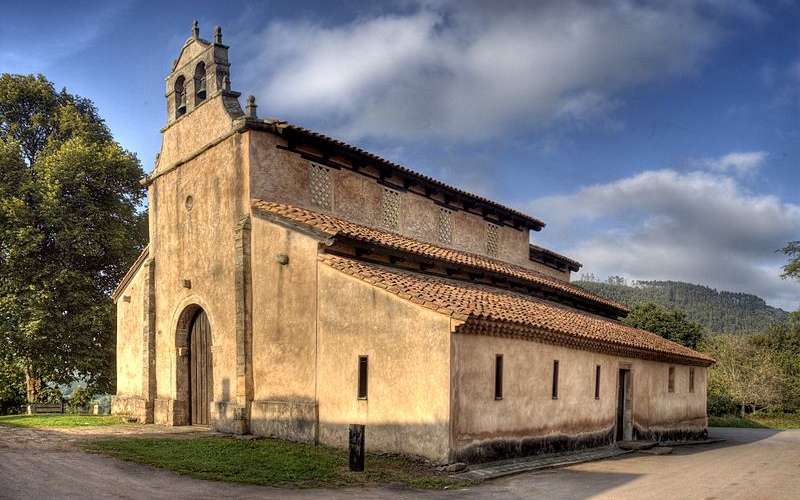 Built in 921, the Church of San Salvador de Priesca was recognised in 2015 as a World Heritage Site as part of the Ways to Santiago de Compostela: French Way and Northern Spanish Ways. Inside, there are original remains of paintings with vegetable, geometric and architectural motifs of great beauty and historical value.

Although this temple has suffered adversities, remodelling and extensions throughout its history, it still conserves a large part of its original layout. A clear example of this are the lattices in the exterior openings of the temple. Also, the remains of the mural paintings inside and the capitals decorated with leaves, clear witnesses of its past. 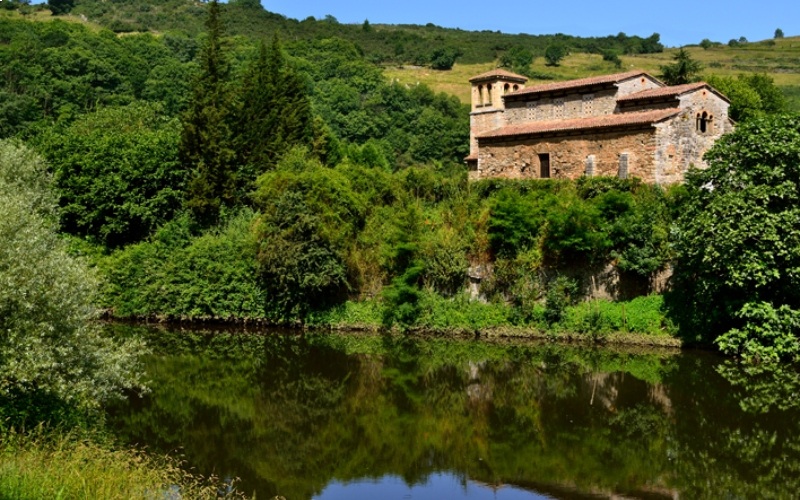 San Pedro de Nora and its surroundings on the banks of the river Nora. | turismoasturias.es

The Church of San Pedro de Nora stands out in its surroundings despite its humble proportions. Thanks to a careful reconstruction carried out by Luis Menéndez Pidal in the 1940s, this church continues to be a clear example of a monument of Asturian pre-Romanesque architecture. It has great architectural similarities with other temples in Asturias such as San Julián de los Prados. A highly recommended visit to enjoy the banks of the river Nora.

Santa María del Naranco and San Miguel de Lillo, gems of Oviedo and on the slopes of Monte Naranco 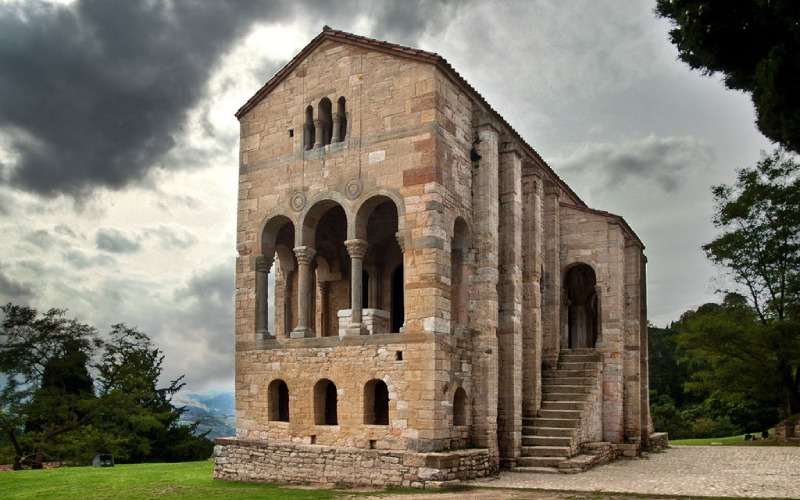 Without doubt, Santa María del Naranco and San Miguel de Lillo are the gems of Asturian Romanesque. Not only because of their magnificent state of conservation, but also because they were declared World Heritage Sites in 1985 for their unique characteristics together with Santa Cristina de Lena, San Julián de los Prados and the Cámara Santa of the Oviedo Cathedral (the latter two were included in the list in 1998). 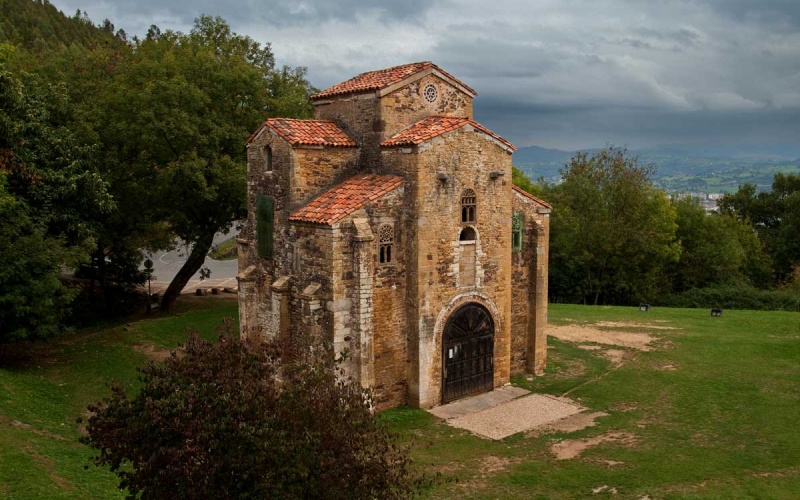 Belonging to the ancient palatial complex of Ramiro I, these two monuments are located only four kilometres from Oviedo. At first, Santa María del Naranco was not conceived as a church, but it was the Aula Regia of the palatial complex. Its artistic style is the so-called “ramirense”, within the Asturian pre-Romanesque period. On the other hand, San Miguel de Lillo was built as a church dedicated to San Miguel Arcángel, as a palace temple of the royal complex. Both monuments are today the most important examples of Asturian pre-Romanesque architecture. 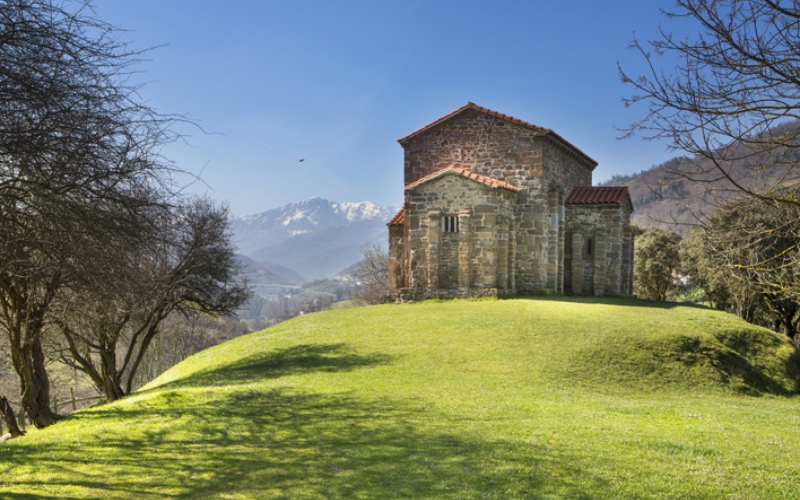 Situated on a hill and dominating the valley of the river Lena, Santa Cristina de Lena rises unmoved by the landscape of the high peaks of the Natural Park of Las Ubiñas-La Mesa. Built in the middle of the 9th century, this church is notable for its great state of conservation, but also for its roughness. 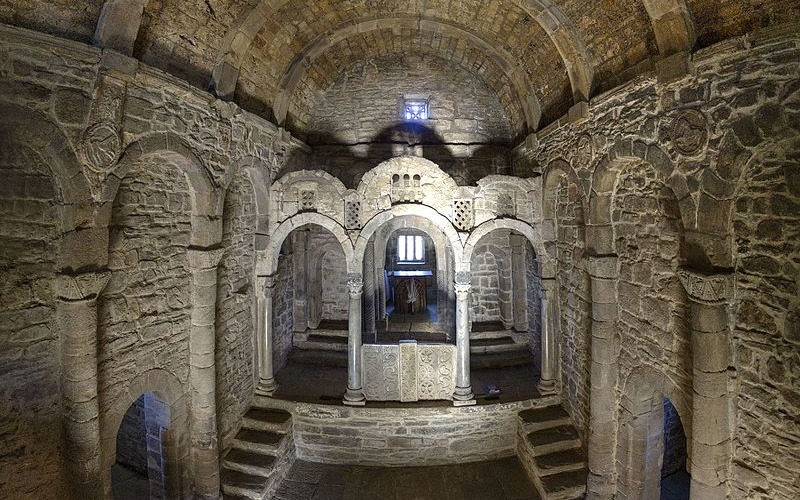 Its structure consists only of a single rectangular nave with four projections on each of the temple walls. Inside, there is a beautiful altar with blind arches, decorated columns and capitals and medallions.

The Church of San Julián de los Prados, World Heritage Site since 1998, is located a short distance from the historic centre of Oviedo. What undoubtedly makes this church unique are the mural paintings that are preserved throughout the building. Although they are deteriorated by the passage of time, it still maintains a significant part of them.

It is believed that San Julián de los Prados was built, like Santa María del Naranco and San Miguel de Lillo, within a palatial complex. This in turn had a palace, baths and other rooms. Before that, the site was still occupied by an old Roman villa. 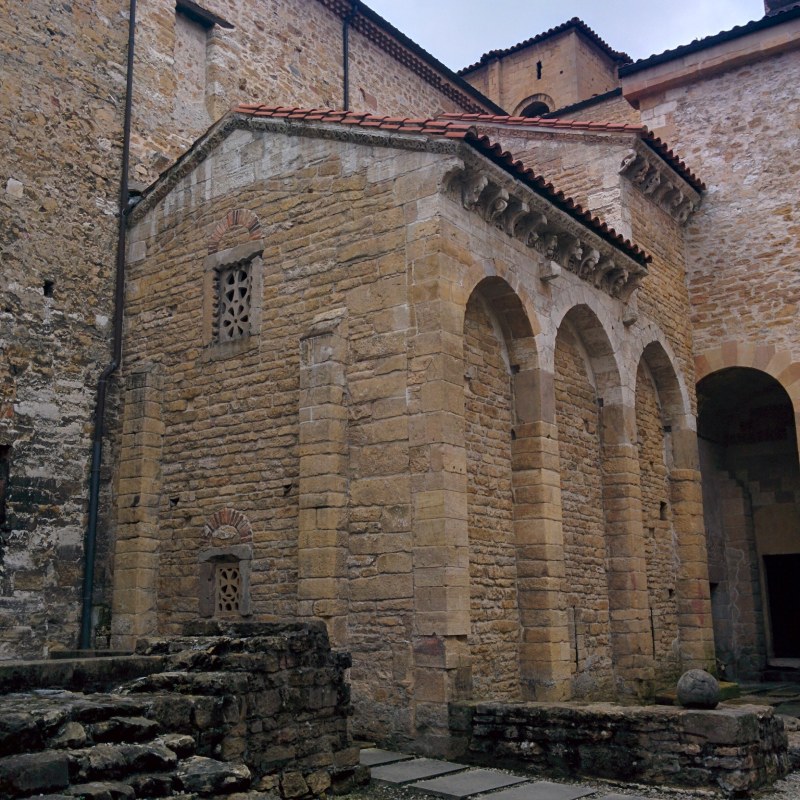 Outside the Cámara Santa of the Oviedo Cathedral. | wikimedia

To end this list of Asturian pre-Romanesque monuments, we should mention the Cámara Santa of Oviedo Cathedral. It was recognised as a World Heritage Site in 1998, as was San Julián de los Prados. On the other hand, both its structure and its materials place it in the 9th century. At that time it was a palace chapel of the palace of Alfonso II el Casto. Meanwhile, its mission was to house the relics and the cathedral treasure. Of the group, the Arca Santa, the Arca de las Ágatas or the Cruz de la Victoria are worth mentioning. 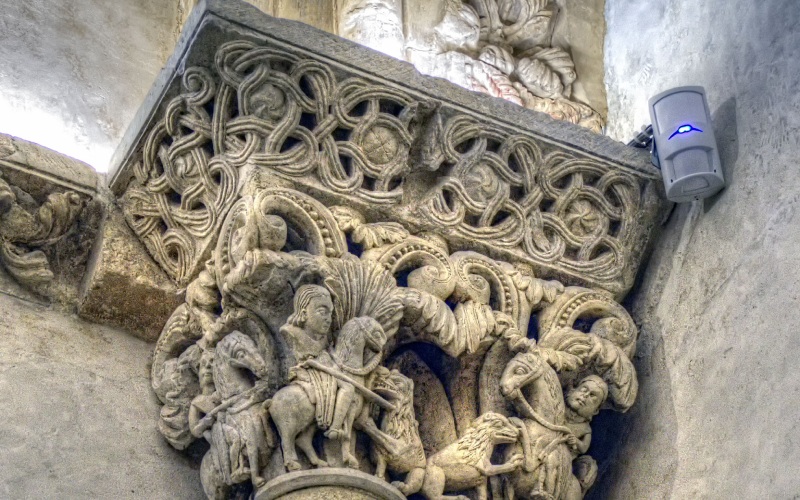 Capital of Byzantine influence of the Cámara Santa of the Oviedo Cathedral. | wikimedia

It was modified in the 12th century, when the height of the nave was increased; replacing the original wooden roof with the current barrel vault. It is also notable for the columns that support the vault, carved with the figures of the Apostles. Despite its relatively good conservation, many original elements and wall paintings were destroyed during the burning of the convents in 1934. The Cámara Santa was later reconstructed and re-consecrated in 1942. Despite the vicissitudes it has suffered throughout history, it continues to be a great representative of Asturian pre-Romanesque monuments.

art, ASTURIAS, churches, Middle Ages, Romanesque, Way to Santiago
It may interest you...

Jaca Citadel, the only surviving Spanish star fortress
Jaca, in the province of Huesca, has always been one of the great, if not Más información